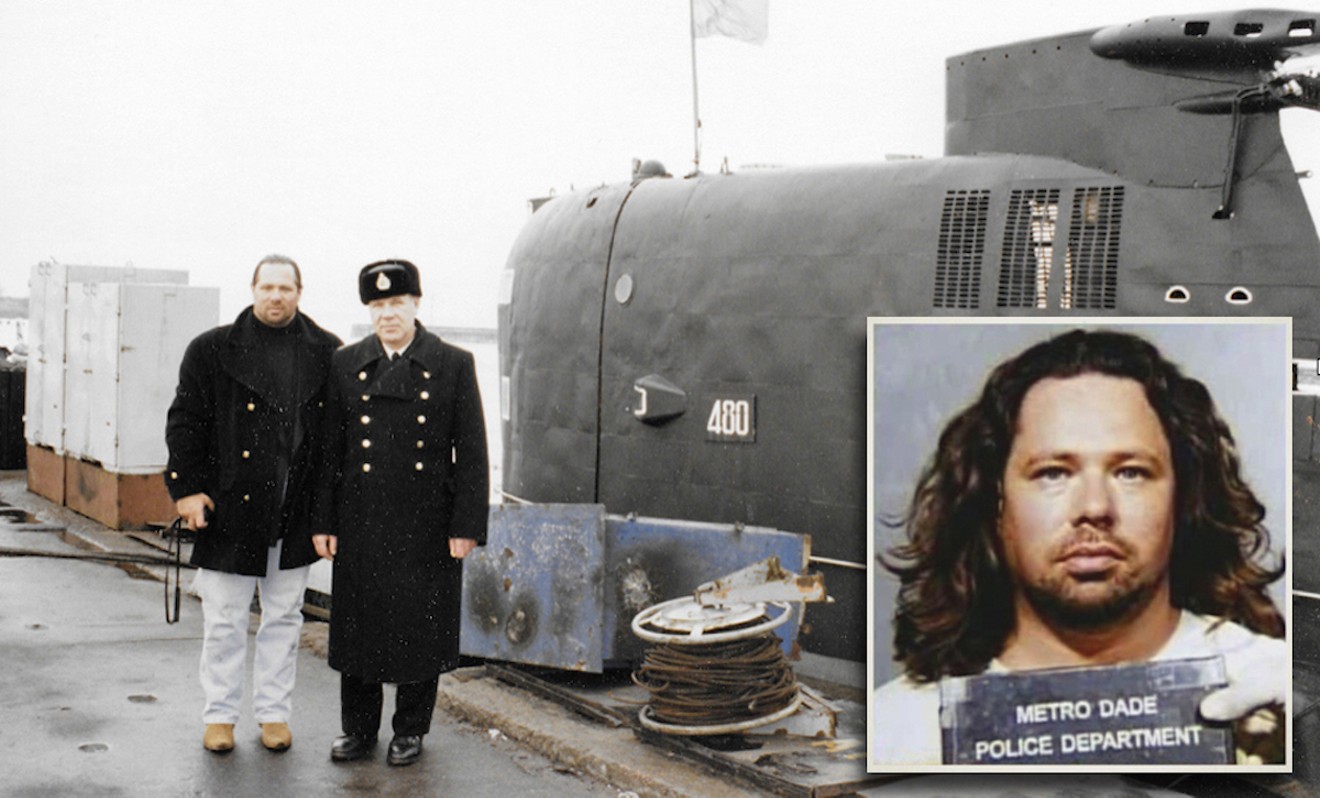 Ludwig Fainberg, also known as "Tarzan," was convicted of helping to orchestrate the sale of a Soviet submarine to Colombian drug smugglers. Courtesy of Showtime

Seven years ago, filmmaker Tiller Russell was preparing to meet with the former Russian mobster at the center of Miami's craziest true-crime caper of the '90s. And he was hoping — or more like praying — a guard at a prison deep in a Panamanian jungle wouldn't screw him over.

The filmmaker had been tipped off by a DEA agent that Ludwig Fainberg, known as "Tarzan," was in the jailhouse. Fainberg had been convicted of helping to orchestrate the sale of a $35 million Soviet submarine to the Cali Cartel in order to transport cocaine from Colombia to the United States and Canada.

After communicating with Tarzan, who had a BlackBerry inside the prison, Russell headed to Panama. He had $1,000 to pay off a prison guard — $500 to get him in and $500 to make sure he left the facility unscathed.

When the guard let Russell in, he sprinted across the yard where inmates were playing soccer and barreled toward a steel door that looked as of it were pulled straight from Mad Max. As the door opened, Russell laid eyes on the maniac who had been incarcerated on charges of trafficking women and selling drugs.

It was then that Russell knew he had his man. "I took one look at him and said, 'This is absolutely a movie,'" Russell says.

Turns out the $1,000 spent on paying off the Panamanian prison guard was one of Russell's best investments as a documentary filmmaker. The result, Operation Odessa, will premiere this Saturday at 9 p.m. on Showtime. The film, which first screened at South by Southwest in Austin, Texas, last month, is a wild tale of how Tarzan, Miami playboy Juan Almeida, and Cuban spy Tony Yester came to run Miami for almost a decade thanks to their booming cocaine enterprise and the sophisticated use of boats and helicopters in trafficking the drugs. Their goal: Outsmart the DEA, the Cali Cartel, and the Russian mob and collect the biggest score of their lives.

"Anything that comes to your head in America, you can do," Tarzan says recently over the phone while on vacation in the Bahamas.

During the interview, Tarzan, a Russian-speaking Ukrainian who lives in Moscow, says he was a dentist, an Israeli military member, and an enforcer specializing in arson for the Gambino crime family. Shortly after moving from Brooklyn to Miami in 1990, he owned a secondhand furniture store. Tarzan says the owner of the building, Bill Seidle, the car dealership giant, told him that he had purchased a strip club and wanted him at the grand opening. Little did anyone know that the club known as Porky's would become Miami's most notorious, roughest strip club.

"I took one look at him and said, 'This is absolutely a movie.'"

Tarzan recalls that on opening night, the manager of the establishment got into a huge fistfight in the middle of the club. When police arrested the man, the former mobster says, authorities discovered he was wanted in 22 states. Upon learning this tidbit, Seidle turned and congratulated Tarzan.

"I said, 'What do you mean?'" Tarzan recalls. "He said, 'This is your club.'... Those things are happening to me on a daily basis. After a while, you start accepting this."

Soon, Porky's, the blue-collar dive by the airport, attracted all comers, from the Russian mob to Vanilla Ice. Tarzan, who carried two guns on him at all times inside the club, was the go-to guy. A drug task force focusing on this period, named "Operation Odessa," alleges that if you wanted prostitutes or dope or if you aimed to make someone disappear, you went to Tarzan. Once he linked up with Almeida, a well-spoken, stylish salesman, they got into the drug business, turning Fort Apache Marina, a playpen for Miami's rich and famous, into the boating command center for the area's drug runners.

In Almeida's words, cocaine was cool and they were the guys you wanted to be around. When authorities got wind of the high-end speedboats being used for drug deals, the friends, seemingly one step ahead, allegedly bought six $1 million Russian military helicopters to aid their South American partners' drug enterprise.

A common theme of the story was how untouchable these men were despite suspected wiretaps from authorities. Tarzan remembers a time when he had a level of influence in Miami that would read like bad fiction to most.

"I was so wealthy it's probably not [about] the amount of money I had in the bank," Tarzan tells New Times. "Wealthy is being able to wake up in the morning and say, 'Today I'm going to go buy a new [Ferrari] Testarossa. It's $350,000? That's nothing.' You wake up the next morning and say, 'Why don't I buy a house somewhere over in Ventura Country Club and you buy a house.' You say to Juan, 'Hey, what kind of food do you prefer?' He'd say Mexican and I'd say, 'Great, we'll fly to Cancún to have lunch.'"

He laughs as he summarizes that period in his life: "You're like a spoiled kid — I want this, I want that."

Perhaps the most interesting mystery is the third member of the trio. It wasn't until Tarzan and Almeida linked up with Tony Yester, a close contact with the Colombians and longtime associate of Pablo Escobar's, that everything went to the next level. Years later, Yester, wearing sunglasses at all times, is visibly aware of what he's done and the consequences that might come one day. Still, he can't help but bask in his good fortune — for now.

"I have to tell you, all my enemies are dead and I'm happy," Yester says in the film. "I'm gonna see them in fucking Hell when I arrive there."

Finding Yester, an international fugitive for decades, was a story unto itself. After making attempts through backchannels to contact him, Russell received a WhatsApp message while interviewing Tarzan in Moscow. "You've met the waiters," the message read. "You should come meet the chef." It was Yester. The next morning, Russell says, he was at his hotel in an undisclosed location in Africa when his phone rang and a voice on the other end offered instructions: "Downstairs. Five minutes. Porsche Cayenne."

As Russell tells it, he walked through a hotel lobby of thick-necked goons in Armani suits. "They certainly weren't business travelers," he says — and found another charming, brilliant, tightly controlled character in the driver's seat of a Cayenne. They tore out of the hotel at 100 mph, with Yester questioning the filmmaker's intentions.

"At a certain point, Tony slaps me across the chest and goes, 'You better be who the fuck you say you are, and this better be what you fucking say it is,'" Russell remembers Yester telling him. "'If not, we're going to have a problem.' My heart was in my throat."

Today the three friends' lives couldn't be more different. Tarzan, who broke out of the Panamanian prison and was repatriated to Russia, is barred from reentering the United States. Though Almeida is still in Miami, he's dealing with charges of narcotics trafficking. And Yester, who made off with $10 million, his cut from the botched submarine deal, is still on the run.

Now age 60, Tarzan has sympathy and respect for the men who were there at the height of their success. "I have to tell the same thing about Tony and Juan," Tarzan says. "If I didn't love both of those gentlemen — extremely nice people, big hearts, smart, and very funny — I wouldn't [have done] the things we did without those qualities. I would wish them luck and happiness and prosperity. I love both of those guys."

So, would Tarzan, an undisputed untouchable of Miami's past, do it again?

"Would I do it again?" he says, repeating the question. "God chose me for this kind of life. It's not always fun."

Tarzan mentions how he was separated from his family and his time in prison. He briefly pauses before going on: "I'm not sorry about anything. I did what I did; that was my life. God created me this way and gave me the path to go. I didn't kill anybody. I didn't steal anything. I didn't do bad to people. I lived my life."

One would think Tarzan is finished, but he sounds as if he's hardly done living an interesting life: "Some people go on to be professors, and some are criminals. Again, this is life... We cannot change our life."