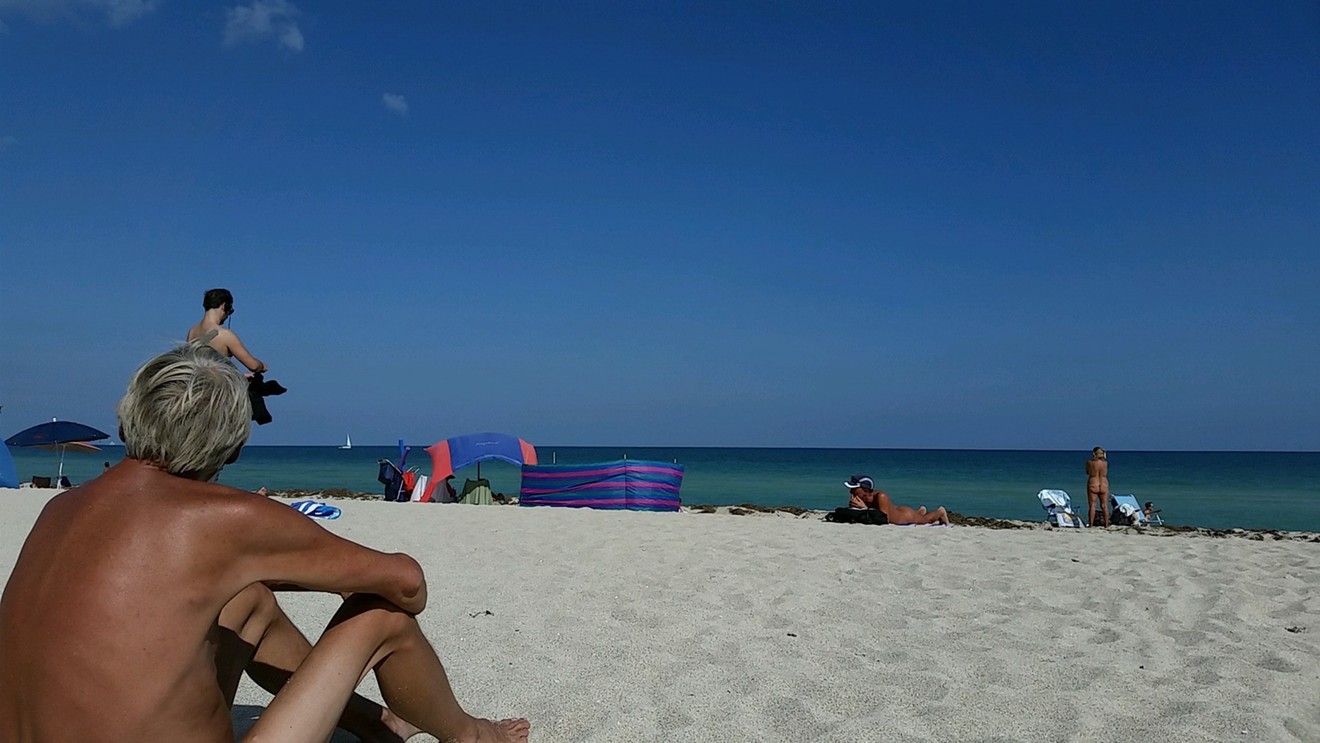 A nudist leader is trying to force the removal of a tiki hut at Haulover Beach because, he says, it attracts a criminal element. Photo by osseous/Flickr
Retired professor Timothy Vance has been a nudist for the past 25 years. And for nearly that entire time, he has spent his weekends at Miami Beach's clothing-optional Haulover Beach.

Around 2003, South Florida Free Beaches (SFFB) — a group that made Haulover a nude beach in 1991 — erected three chickee huts at the beach's entrance. Since then, Vance — the leader of another nudist group, Florida Lifestyle Naturists — says, he has grown increasingly frustrated with clothed gawkers who huddle in the chickee huts to check out the naked sunbathers.

"It's always used as a platform for viewing," Vance says. "They hide from the sun, get under there, and watch a bunch of naturists or nude people."

After some haranguing from Vance, SFFB took down two of the structures this past September. Now Vance is on a mission to get rid of the remaining chickee hut. Earlier this year, he filed an injunction asking a Miami-Dade circuit judge to force SFFB and Miami-Dade County to remove the hut in what he sees as a mission to clear Haulover Beach of its criminal element.

"The structures were and have been used as a platform for non-sunbathing beachgoers for several disruptive activities," Vance's complaint reads. "Among the activities, the following have occurred... illegal drug use, urinating in public, recording of video and photographic images to submit to internet sex sites... sexual harassment of sunbathers, defecation, and loitering by homeless individuals and vagrants."

SFFB president Richard Mason tells New Times the group commissioned Seminole Tribe members to build the chickee huts about 20 years ago. The idea was that the structures could be used as information booths for visitors interested in learning more about naturism, a lifestyle that accepts the naked human body as natural. And for those who already identified as naturists, the huts could be used for communal gatherings.

"When we put the chickee huts up, it was for groups to come who want to have a picnic or a social get-together so they would be able to do it out of the sun," Mason says. 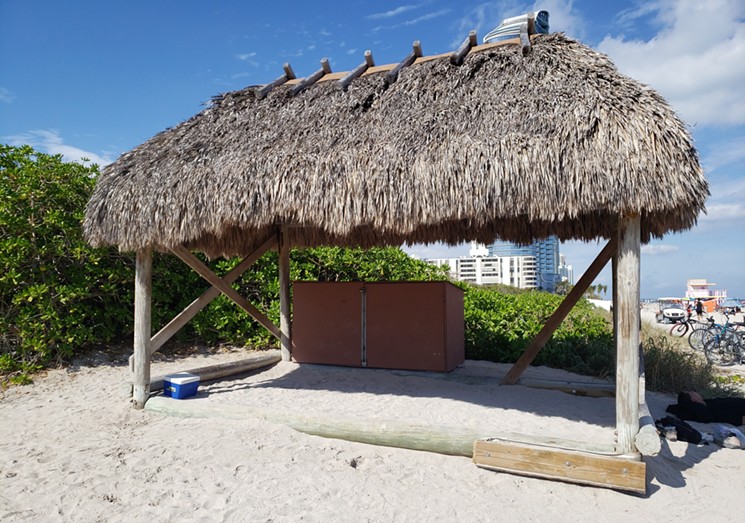 A chickee hut at Haulover Beach.
Photo via Miami-Dade County
Mason acknowledges many of the problems Vance has spoken out about. Over the years, Mason says, homeless people began to use the chickee huts as shelter, and voyeurs set up camp underneath the thatched roofs.

Though both men agree Haulover has a fundamental problem with crime, they differ about how to restore peace to the beach. Vance views the remaining chickee hut as inherently problematic because there's no real way to ensure it's not used for illicit activity.

"Just remove it totally, and if anyone comes there, they can come on equal ground with a tent or umbrella or whatever," he says.

Mason, meanwhile, hopes modifications can be made so his group can continue to use the hut as it was intended. Last year, he put up wooden barriers and locked the structure to keep vagrants out, but the county's building department cited his group for code violations. Mason says there would be no reason to take down the chickee hut if the police would step up enforcement.

"This is a gem of a tourist attraction, and we can't seem to get it properly managed," he says with frustration.

The case might drag on for weeks or even months. Whatever comes of it, Vance hopes Haulover Beach will be rid of those who visit with ill intentions.

"There are people who just want to come there and basically marvel at the nude body, and they don't participate," he says. "That's an insult to me because that's not what it's about. It's about a lifestyle, not about coming down here to look at people's bodies in a lustful way."
KEEP MIAMI NEW TIMES FREE... Since we started Miami New Times, it has been defined as the free, independent voice of Miami, and we'd like to keep it that way. With local media under siege, it's more important than ever for us to rally support behind funding our local journalism. You can help by participating in our "I Support" program, allowing us to keep offering readers access to our incisive coverage of local news, food and culture with no paywalls.
Make a one-time donation today for as little as $1.