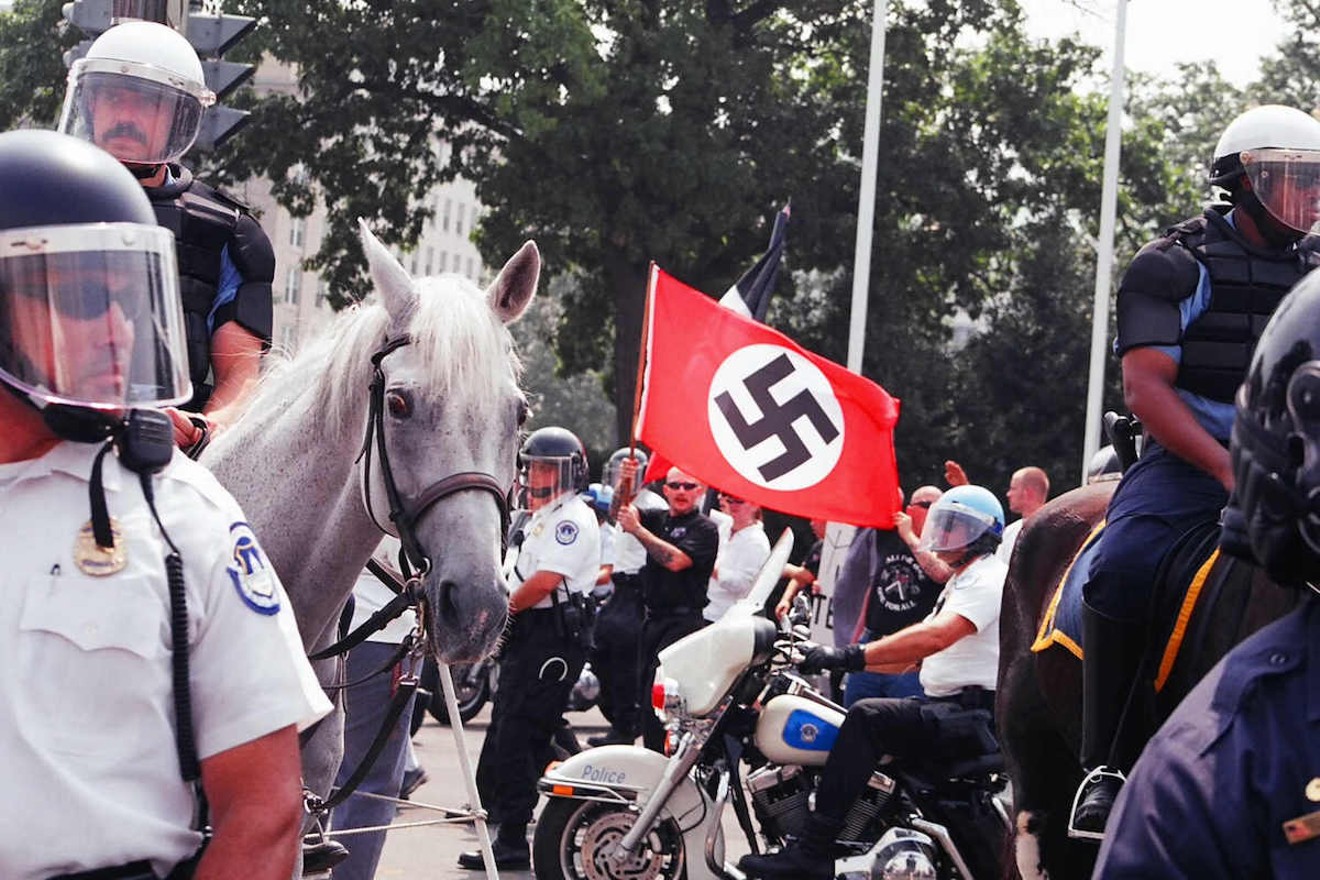 The 2017 Unite the Right rally in Charlottesville, Virginia. Photo by Elvert Barnes / Flickr
Washington state resident Eric Lin was not shy about his love for Adolf Hitler. According to a criminal complaint filed Friday, Lin enjoyed referencing the Third Reich in writing: He apparently sent a litany of Hitler-referencing death threats to a Hispanic woman in Miami and got himself arrested last week after he planned to wire a man $10,000 to beat her up, hatched a plot to kidnap her and stuff her in a plastic bin, and repeatedly vowed to kill every Hispanic person in the Magic City.

"The time will come when Miami will burn to the ground — and every Latin Man will be lined up against a Wall and Shot and every Latin Woman Raped or Cut to Pieces," Lin allegedly wrote August 8.

Lin, age 35, is originally from Clarksburg, Maryland, but was arrested Friday in Seattle and charged with making threatening communications online. Lin appeared in Seattle federal court for this first time this morning. He has not yet entered a plea.

According to an affidavit from a Miami FBI agent filed in federal court, Lin was not shy about putting his violent threats in writing. Between May and August of this year, Lin allegedly fired off a litany of hateful, pro-Trump, pro-Hitler, and violent Facebook messages directed toward Hispanics living in Miami. Those messages wound up in the hands of the FBI.

Per the FBI agent's affidavit, an alleged victim — an immigrant from Spain identified only as "C.I." — contacted the Miami Police Department to alert law enforcement that Lin had been sending her threatening messages from two Facebook accounts since May 30. Miami PD alerted the FBI July 24. Then the feds interviewed C.I., who provided 150 printed pages of insanely racist, violent messages Lin had allegedly sent. She said Lin had at one point frequented the Miami restaurant where she worked.

Among the many terrifying messages Lin sent was an image of Hitler superimposed over a photo of Lin's face, C.I. said.

"Composite of my face with the Führer and Reichskanzler Deutschland," he allegedly wrote May 30. The informant also told the FBI that Lin had whipped out the same photo in the restaurant where C.I. worked.

From there, the messages grew far more hateful and violent. Lin repeatedly said he wanted to "kill" and "exterminate" Hispanics, whom he repeatedly referred to as "Spics." In one case, he called Hispanic people "rabid dogs." In another, he said he would let C.I. "live so you can slowly watch me destroy your entire race."

"In 3 short years your entire Race your entire culture will Perish only then after I kill your Spic family I will permit you to die by hanging on Metal Wire [sic]," Lin allegedly wrote June 7. The next day, he told C.I. he planned to "enslave, rape, and use you like a baby-making machine. Once I'm finished with you I might just get rid of you like a piece of trash." The same day, he allegedly also said he would kill C.I. with a rifle while carrying a neo-Nazi dagger used by the SS.

The messages only continued. He allegedly said he wanted to "exterminate" the "worthless Latin race." July 9, he sent more Nazi-referencing threats. "By the authority of ADOLF HITLER AND GOD I HEREBY DECLARE SPANISH AND ALL SPANISH-SPEAKING PEOPLE ILLEGAL," Lin allegedly wrote. "[T]hat's ALL I NEED AUTHORITY FROM ADOLF HITLER TO ACT. I FOLLOW ONLY ADOLF HITLER AND THEN GOD. THEY ARE ONE AND THE SAME." He again threatened to kill every Hispanic person in Miami and at one point told C.I. he would "drink your blood until you die."


I thank god every day Donald John Trump is President and that he will launch a Racial War and Crusade to keep the Niggers, Spics, and Muslims and any dangerous non-White or Ethnically or Culturally foreign group "In Line." By "in Line" it is meant that they will either be sent to "Concentration Camps" or dealt with Ruthlessly and Vigorously by the United States Military.

The FBI obtained a warrant to search Lin's private accounts. The feds found even more terrifying details: Lin had apparently been hatching plans to pay someone to hurt or kidnap C.I. while he'd also been messaging her.

"Sure, pay me first Paypal or Zelle," the alleged accomplice responded.

Days later, Lin seemingly changed his tune. Instead of simply beating up C.I., "Chris" should kidnap her, stuff her in a plastic bin, and transport her all the way to Seattle. Lin wrote:


The Plan is you and Mara convince her that you are Rich White Americans people she looks up to. And then get her into a rented house or mansion and chain her up and put her in a Rubber maid Plastic Bin. Then you got to drive her to Seattle, Washington, upon which I will pay you $25,000 cash. You don't need to kill her her hurt her at most you will be charged with Kidnapping. Nothing will happen to you if you get the Right lawyers She's a Spic who Hates White Americans... I doubt the FBI would care much about her. [sic]

The same day, he added, "I don't care if I have to Pay you a Million Dollars or More I want this Done! [sic]"

Thankfully, Lin never got the chance.
KEEP MIAMI NEW TIMES FREE... Since we started Miami New Times, it has been defined as the free, independent voice of Miami, and we'd like to keep it that way. With local media under siege, it's more important than ever for us to rally support behind funding our local journalism. You can help by participating in our "I Support" program, allowing us to keep offering readers access to our incisive coverage of local news, food and culture with no paywalls.
Make a one-time donation today for as little as $1.