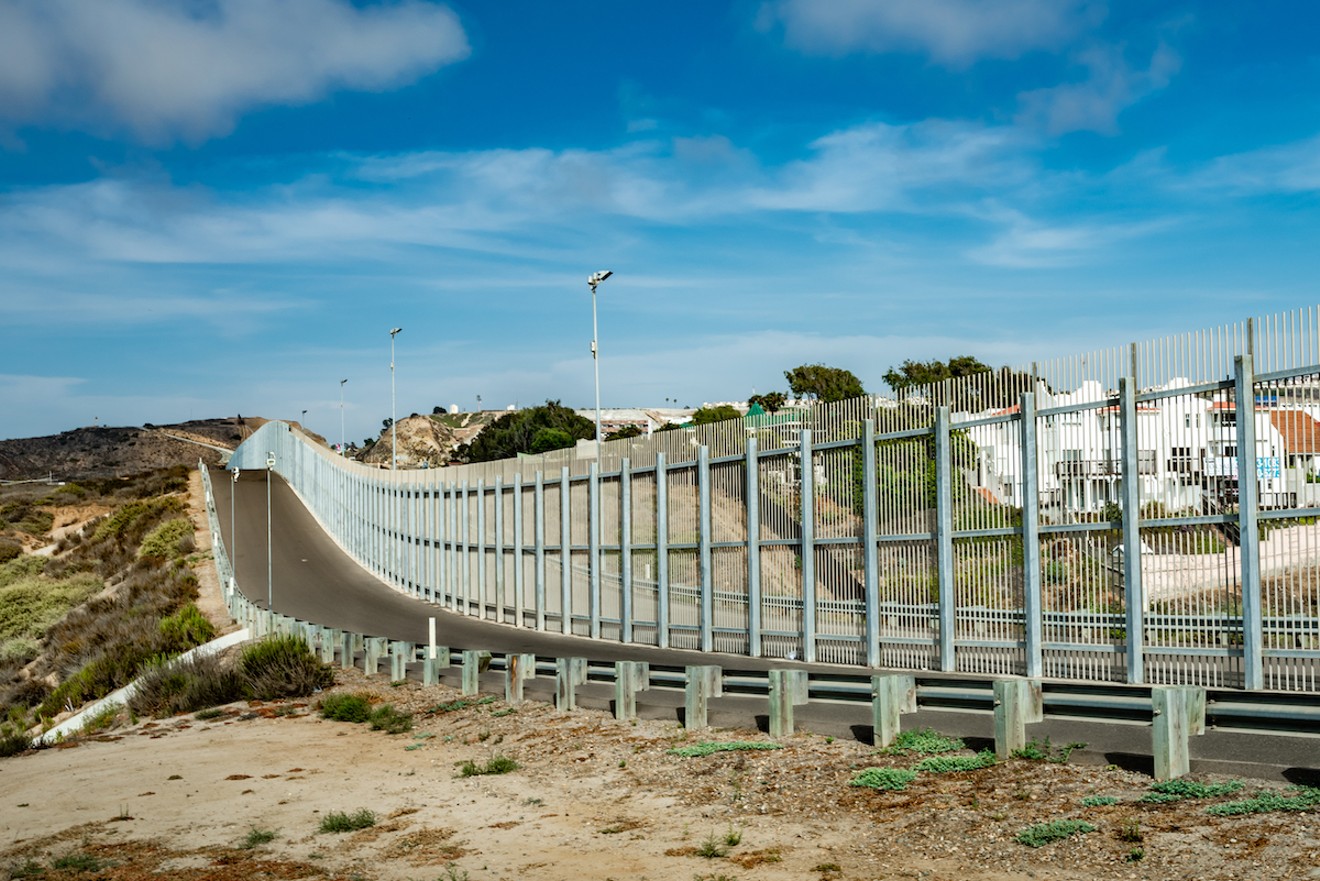 U.S.-Mexico border in California. Photo by Photos597 / iStock.com
It's legal to walk up to the U.S. border and apply for asylum. But U.S. Customs and Border Protection agents decided to fire smoke grenades and tear-gas canisters at members of a migrant caravan at the Tijuana border over the weekend. Under international law, tear gas is a chemical weapon that's banned for use in warfare. The immigrants hit with the gas clouds this weekend included children.

The images from the border laid bare the barbarity this country employs to deal with poor, helpless people. They also displayed the callousness and cruelty of the right-wing press, which largely wrote off the tear-gas attacks. And the incident highlighted one Florida company that's making a pretty penny from the disaster: Defense Technology, a weapons and police-supply company owned by the Jacksonville-based company Safariland.

Safariland's products were also infamously used on American protesters during the 2015 Ferguson, Missouri, riots and the protests against the Dakota Access Pipeline in North Dakota. (One Standing Rock protester sued Defense Technology after she says one of the company's flashbang grenades nearly blew off her hand.)

Multiple reporters have posted images and video of Defense Technology canisters unleashed upon the caravan. In a now-infamous Reuters photograph, immigrant Maria Mesa was captured tearing her children away from what appears to be a cloud of tear gas fired by American border agents. Mesa later showed an NBC News reporter a canister she picked up from the scene — the photo shows a Defense Technology "Riot Control" can full of , also known as "CS gas" or tear gas. A product manual for the Riot Control canister warns the gas can cause "irritation, burning sensation[s], coughing, the sensation of shortness of breath," and "tightness in [the] chest, often accompanied by a feeling of panic" and other side effects.

Tear gas has been linked to permanent respiratory damage in children and miscarriages in pregnant women. Doctors have repeatedly challenged its status as a "nonlethal" weapon. Trump's defenders have pointed out that the Barack Obama administration also used tear gas at the U.S. border — but that doesn't excuse either administration.


This is the Mom in that photo. Her name is Maria Mesa and she says she was scared for her life and the life of her children yesterday. Holding the tear gas canister, she said seeing the photo of her from yesterday makes her want to cry “I just grabbed my kids and ran” pic.twitter.com/0crStFaasT

Activist Martinez lined up a row of Defense Technology and Safariland products that were used on the caravan.

An independent photographer on the scene posted similar images.
Representatives for Safariland did not immediately respond to messages from New Times yesterday. An investor named Warren B. Kanders has run the company in multiple stints: In 1996, Kanders and business partner Robert Schiller founded a firm called Armor Holdings, which owned Safariland until 2007. Kanders then bought Safariland himself in 2012. Kanders is a trustee at New York City's Whitney Museum. Safariland has also reportedly paid more than $40 million in settlements to the U.S. Department of Justice for "alleged criminal activity connected to the sale of defective bulletproof vests," according to the International Business Times. In 2011 (before Kanders bought the company), Safariland admitted to prosecutors that the company had bribed a United Nations officer for inside information as part of a plan to underbid competitors for contracts.

Other reporters this week have noted that Kanders is a major political donor both to Republicans and a few Democrats, including Hillary Clinton and New Jersey Sen. Corey Booker. Booker this week condemned the tear-gas attacks without mentioning that he's taken campaign contributions from the tear-gas manufacturer.

The company is also connected with Florida politics. Armor Holdings, the former Safariland parent company that Kanders cofounded and previously ran as CEO, donated $40,000 to the Florida Republican Party in 2004, according to the National Institute on Money in State Politics.

The Young Turks, a "news and talk network" aimed at millennials, yesterday unearthed a new, $526,799 federal contract Safariland inked with Customs and Border Protection last September. The company's slogan is "We save lives."
KEEP MIAMI NEW TIMES FREE... Since we started Miami New Times, it has been defined as the free, independent voice of Miami, and we'd like to keep it that way. With local media under siege, it's more important than ever for us to rally support behind funding our local journalism. You can help by participating in our "I Support" program, allowing us to keep offering readers access to our incisive coverage of local news, food and culture with no paywalls.
Make a one-time donation today for as little as $1.