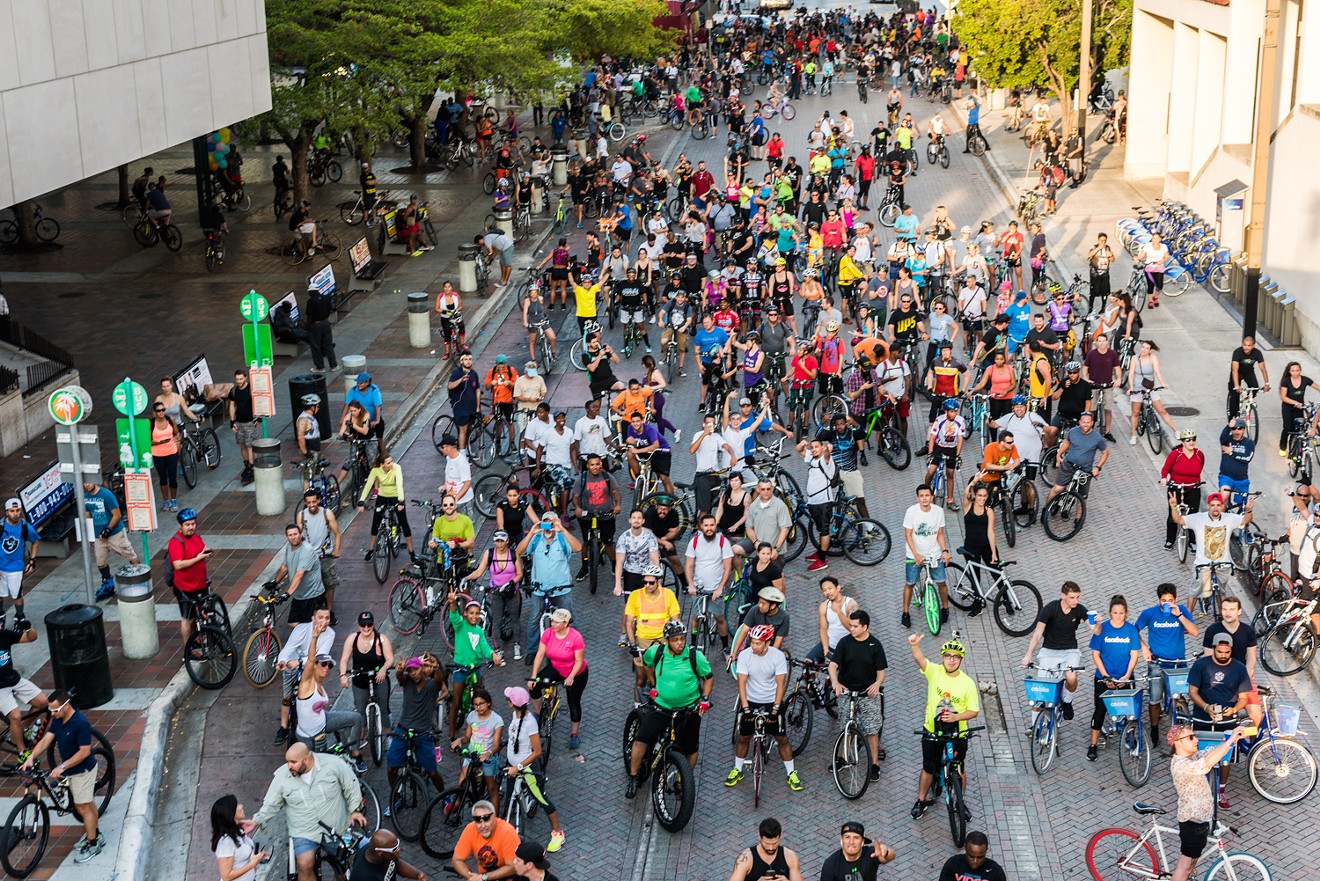 With a more widely vaccinated population and relaxed pandemic restrictions, this month's Critical Mass bike ride may be a doozy. Photo by Karli Evans
Curfews have been lifted, and cyclists are once again hitting the streets en masse. As the Magic City returns to normalcy after a year spent mostly inside, Miami's Critical Mass bike ride returns again tonight as an outlet for cyclists — and a potential headache for drivers.

Critical Mass has long been a staple of Miami's outdoor scene, drawing scores of bicyclists once a month on a 20-mile route through Miami neighborhoods, including Overtown, Wynwood, the Upper Eastside, and downtown.

Although the March ride was canceled last year when large gatherings were prohibited because of COVID-19, the rides have continued since then and served as an escape for professional and amateur cyclists tired of being cooped up and looking to get outdoors.

This month's ride starts tonight at 7:15 p.m., starting at Government Center downtown and snaking through large swaths of Miami and Miami Beach.

Despite its popularity, Critical Mass is known by some locals for its habit of congesting roadways with hundreds of bicyclists in a county and state that are not known to be very bike-friendly.

Miami Bike Scene, an organization that advertises but does not sponsor the event, warns riders to bike responsibly and stay in the right lane to allow traffic to flow.

"All eyes appear to be on Miami Critical Mass and it's time for participants to prove the opposition wrong," the group says on its website. "If you're partaking in the ride, then it's your duty to positively influence others. Ride safely and be courteous to everyone in the community; if you can't do this, then quite simply you are not welcomed."

Miami Bike Scene sees Critical Mass as an opportunity to give new and experienced cyclists a chance to feel comfortable riding bikes in Miami, with the added safety of riding in a large group.

Critical Mass isn't sanctioned by any city, and while in previous years the bicyclists have enjoyed a police escort, officers will not be accompanying the riders at tonight's event. Instead, Miami Beach police will be posted at key intersections along the bike route on the Beach, according to a City of Miami Beach press release.

After a pandemic-induced bicycle boom that left Miami bike shops short on supply, this month's ride might be more critically massive than ever, especially now that many Miamians are vaccinated. More cars from people who've returned to in-person work might also cause some friction between folks on four wheels versus those on two.

Expect traffic delays tonight along the event's 20-mile loop, which includes parts of Biscayne Boulevard, North Miami Avenue, and the Venetian Causeway. Cyclists will start to gather at Government Center at 6:30 p.m. and begin riding at 7:15 p.m.
KEEP MIAMI NEW TIMES FREE... Since we started Miami New Times, it has been defined as the free, independent voice of Miami, and we'd like to keep it that way. With local media under siege, it's more important than ever for us to rally support behind funding our local journalism. You can help by participating in our "I Support" program, allowing us to keep offering readers access to our incisive coverage of local news, food and culture with no paywalls.
Make a one-time donation today for as little as $1.