Photo by David Pierce Rodriguez
Tucked inside a cold alcove, Ana Echeverri clutches a translucent stone pendulum. Rubbing her chest, the psychic medium whispers at the wall, her voice muffled by the groans of a ceiling fan: "Did you kill her?"

It was late in the evening of August 10, and paranormal researcher David Pierce Rodriguez — a web developer from Coral Gables by day — had brought members of his ghost-hunting team to Homestead's Hotel Redland, where a century earlier, a fire had consumed the building, killing many occupants in their sleep. Ever since, guests at the hotel have reported suspicious activity.

Rodriguez's team of ghost whisperers has assembled hoping to solve the latest mystery tied to the historic hotel: the case of a jilted woman whose abusive partner reportedly threw her out a window.

Hauling five briefcases of night-vision cameras and infrared sensors, Rodriguez, a 46-year-old with skull tattoos, yellow-tinted glasses, and a 5 o’clock shadow, enters the hotel and greets the owner in Spanish. Born in Madison, Wisconsin, Rodriguez spent the majority of his childhood in Spain and Portugal, where he says he had his first "encounter." At 9 years old, he was walking in front of a school bus when an oncoming vehicle almost crushed him to death. Feeling two hands on his back, Rodriguez swears he was saved by the push of a guardian angel.

When he was 12, Rodriguez moved with his little brother to their grandfather’s multistory limestone house in Columbus, Ohio. One afternoon, Rodriguez was home alone while his nanny and brother went out for burgers. Sitting on the toilet in the upstairs bathroom, he heard a bang on the door three times. Certain his brother had returned to pester him, he ignored the distraction, but the booms grew louder. When he opened the door, he saw no one.

Fascinated, Rodriguez spent the next four years trying to communicate with his in-house ghost, often banging metal rods on the staircase. “Possession is a strange creature,” he says. “It’s like with cats. If you don’t like them, they’ll probably leave you alone, but once you do like them, they come to you.”

In 1996, Rodriguez co-owned a recording studio in Atlanta, Georgia. One evening, while breaking down the recording room, he heard someone speak his name through the microphone, he says. Ever since, his preferred method of documentation has been recording EVPs — electronic voice phenomena. “Nowadays, people can fake ghost photos with Photoshop, but how do you deny a voice recording when you’ve heard it played back to you in the same room?” he asks.

In 2003, Rodriguez, then a web developer, started a paranormal meet-up group in Omaha, Nebraska. Within a couple of meetings, the group had grown to 60 people, and Rodriguez created the Paranormal Research and Investigative Studies Midwest, or PRISM. Within two years, the organization expanded to 15 teams worldwide, offering private investigations and consultations free of charge. 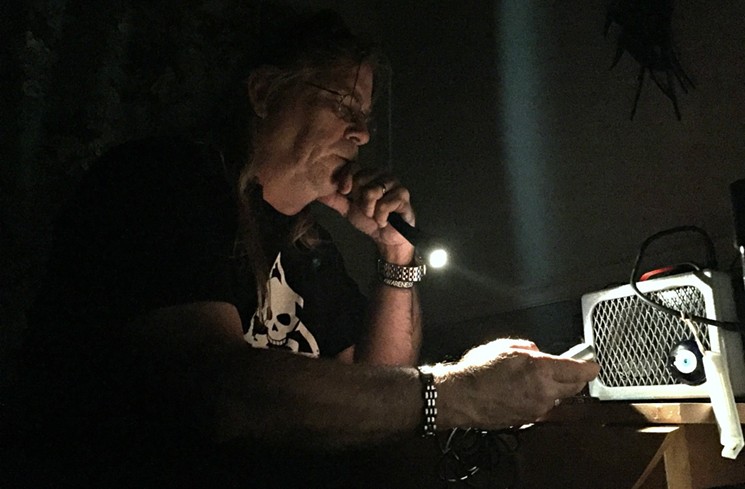 Photo by Isabella Gomes
Once he moved to Coral Gables, Rodriguez became director of the South Florida branch. Before long, PRISM Miami gained notoriety for its guided ghost tours at the Deering and Thalatta Estates, as well as its "investigations" of the Miami City Cemetery, Villa Paula, the Gold Coast Railroad Museum, and local residences. Bombarded with invitations from Hispanic television networks, Rodriguez made guest appearances on Univision, Telemundo, Mega TV, América TeVe, and Mira TV. “My busiest time is around Halloween,” he says. “That’s six shows at least.”

Last week, the team responded to a residential possession case in Doral. Rodriguez had received a call from a Hindu man who claimed his spiritual master had hijacked his mind in his meditation room. Immediately, the team advised the man and his wife to move. Generally, Rodriguez considers possession cases evil.

“They’re not like ghosts that bake cake, you know? Like you’re not gonna get possessed by Betty Crocker,” he says.

Tonight Rodriguez and his crew have come to Homestead, to a hotel with a well-documented history of tragedy.

Built in 1904, Hotel Redland on Flagler Avenue is considered the oldest surviving building in Homestead. In its early years, it functioned as a rooming house, a supply store, and a post office. Though business blossomed, the hotel was struck by tragedy the night of November 10, 1913. A fire had started in the attic and burned down the building. Several guests, asleep in their beds, died. Nine days later, it was announced that a new hotel would be built in the same location.

At the time, rumors surrounded the mystery of a woman who had died after falling from the window of room 202. Some said she had tried to crack a window during the fire, causing it to intensify and burn her to death. Others said she had been thrown out her room by an ex-lover while others said she was thrown out for snitching on a bootlegger during Prohibition period. Whatever the story may be, says Rodriguez, he's sure that the ghosts of both the man and woman are in the room.

Inside Hotel Redland on this humid August night, Rodriguez lays a metal briefcase on the duvet of a queen-size bed in room 202 and pulls out a handheld Panasonic recorder. “These are the best for recording ghost voices,” he says.

After her invocation, Echeverri vacates the dark, humid alcove. A few years ago, after her husband died, the curly-haired embroiderer began seeing his ghost, she says. After approaching Rodriguez, she became the team's resident psychic medium. In terms of her predictions, Rodriguez finds she's "almost always spot on."

Perturbed after tonight's readings, Echeverri sits cross-legged with her purple purse on the floor. Quietly, she says, "It's a thin, tall man. He threw her out this window."

Kneeling beside the bed, Tim Arnwine, a retired paramedic from Pembroke Pines, calibrates a radio. Across the bed are specialized meters measuring infrared, electromagnetism, sound, and motion. He picks up a teddy bear and pokes its furry belly. Immediately, the toy — a "boo bear" — begins to ask automated questions. Arnwine explains the teddy bear is for child ghosts to interact with because other tools might be intimidating.

"We don't provoke ghosts," Rodriguez says sternly. Once, a volunteer on Arnwine's team tried screaming as a tactic and was immediately discharged. "I'm more scared of people," Rodriguez says. "They're the real monsters."

He sets up a recorder and begins to speak. In a clear, enunciated voice, he asks for a name, a gender, a cause of death, and, finally, whether the ghost likes guests living in the room. For two hours, his recorder registers only crackles, static, and the gentle hum of a portable air conditioner. Around midnight, Rodriguez becomes frustrated and delivers an ultimatum: He'll leave if he receives no response. He asks for a name once again and plays back the recording. Faintly, he says, he hears one: "Lonnie Lee."

Just outside the door is a framed portrait of a young man with golden locks and a boyish grin. The heading: "Lonnie Lee Hood 1935."

As the team flips on the light and packs the equipment, Rodriguez smiles. "That's why I do these investigations and tours," he says, "I get how people think ghosts are fake, because they've never seen or heard them. It's like I wouldn't believe in a giraffe unless I had seen a giraffe."

Echeverri purses her lips and exits the room. "It's not a good vibe here," she says. As the team walks down, a couple lugs two large suitcases up the stairs and settles in for the night.