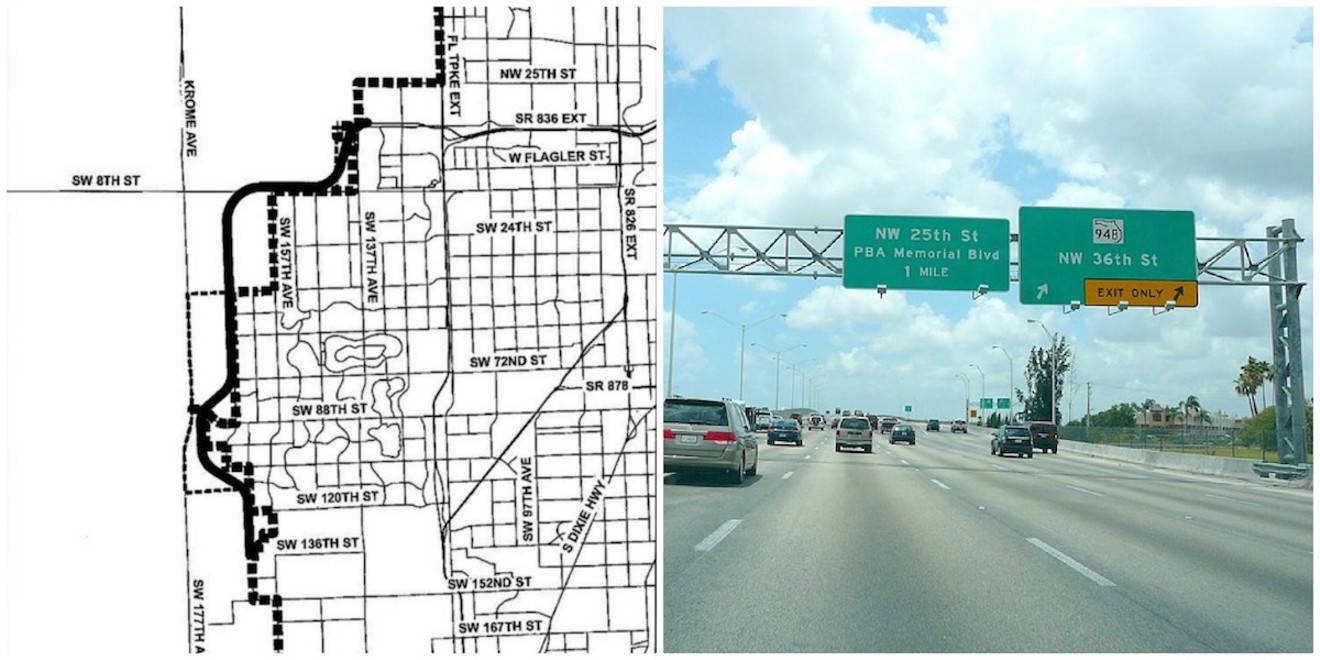 A map shows Mayor Gimenez's proposal to push the Dolphin Expressway past the Urban Development Boundary. via Miami-Dade County and Wikimedia Commons/Averette
Miami-Dade County's proposed extension of the Dolphin Expressway has seemed to unite both Republicans and Democrats in anger: Everyone, from local environmentalists to Sen. Marco Rubio, has slammed the idea. In Miami-Dade, a county where public transportation options are short and traffic wait times are long, activists have warned that the plan to extend a highway 13 miles through the edge of the Everglades was both environmentally foolish and certain to increase traffic congestion in the long run.

Yet Miami-Dade Mayor Carlos Gimenez has literally laughed at that criticism. And now the commission has approved the controversial, $650 million  by a 9-4 vote. Commissioners tentatively approved the project first in June.

Miami-Dade commission approves 13-mile 836 extension past the UDB and into West Kendall on 9 to 4 vote Environmental groups fought it. @MayorGimenez championed it. No votes: Edmonson, Higgins, Levine Cava and Suarez. pic.twitter.com/hKX5AJjdfl


As the Miami Herald has laid out in a series of stores about the expressway, the plan would likely plow through previously protected wetlands, although the extension's final route has not even been finalized yet.

Gimenez has pitched the plan, otherwise known as the "Kendall Parkway," as a solution to the utterly dystopian traffic nightmare that is Southwest Dade. The proposed route for the project takes the expressway past the county's Urban Development Boundary (UDB) — the invisible line that protects the Everglades from being paved over.

The current, proposed route would cross the UDB and through areas including the Pennsuco wetlands and other areas of the Everglades that might become critical areas for water-flow restoration. So local environmentalists such as the Sierra Club have vehemently opposed the extension.

As if the environmental concerns weren't enough, urban-planning advocates have also convincingly argued that the new parkway won't even improve traffic woes. A bevy of research shows that new, multilane highways don't alleviate traffic — instead, they typically fill up with new motorists. Data shows that new highway projects encourage people to drive more, not fewer, miles.

Urban-planning advocates have asked why the county doesn't instead invest the $650 million it plans to spend on the highway into public-transit improvements instead. Miami-Dade was easily able to push the highway extension project through the commission despite the fact that it can't seem to find 12 cents to start building any kind of working rail system or rapid-bus program. Critics have also questioned whether the parkway will siphon money away from the county's SMART rail plan.

Per the Herald's Doug Hanks, today's commission hearing contained the same number of boneheaded comments and logical fallacies from the dais' stalwart conservatives as always:


Commish Martinez on Miami-Dade's UDB: "It's not the Holy Grail" and looks like it was drawn by someone who had "six drinks." Also said the original line was designed to punish "political opponents"

Commish Souto on overblown claims of environmental dangers and risks: "Was Christopher Columbus the first polluter?"

Rather than grapple with the very real data showing there's a "one-to-one" ratio between new highway miles and extra miles driven by motorists, the commission instead greenlighted the project today. Expect environmental lawsuits in the future.
KEEP MIAMI NEW TIMES FREE... Since we started Miami New Times, it has been defined as the free, independent voice of Miami, and we'd like to keep it that way. With local media under siege, it's more important than ever for us to rally support behind funding our local journalism. You can help by participating in our "I Support" program, allowing us to keep offering readers access to our incisive coverage of local news, food and culture with no paywalls.
Make a one-time donation today for as little as $1.