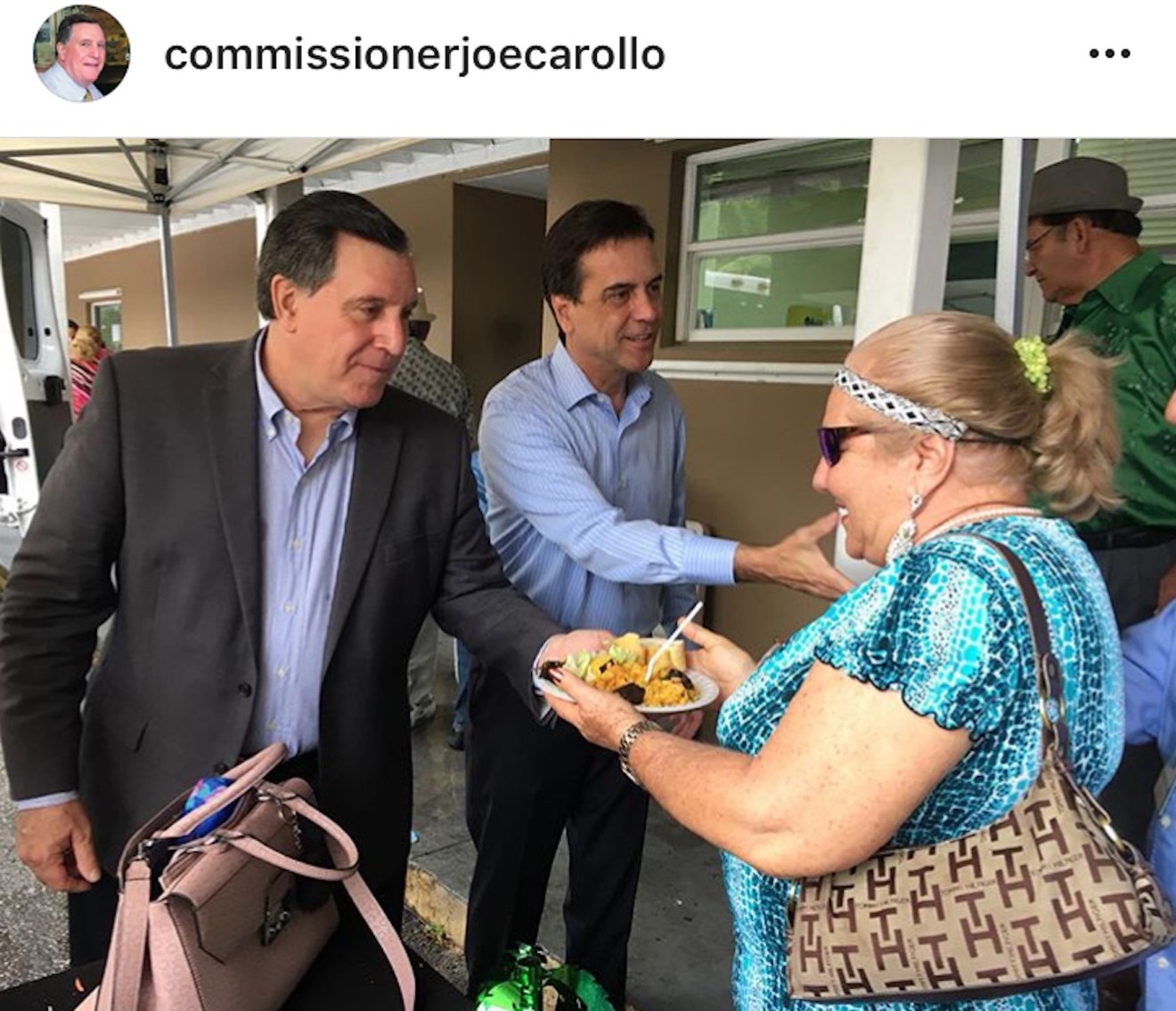 On May 19, 2018, Miami Commissioner Joe Carollo posted on Instagram this photo showing him handing out paella alongside county commission candidate Alex Diaz de la Portilla. Joe Carollo's Instagram
For months, the Miami-Dade State Attorney's Office has been reportedly looking into whether Miami Commissioner Joe Carollo — known to some as "Loco Joe" — broke campaign finance laws to help an old pal, former state Sen. Alex Diaz de la Portilla, in 2018. But in an explosive new lawsuit, Carollo's former aide cut to the chase: In a suit filed Monday, the aide, Steven Miro, said publicly for the first time that he witnessed Carollo "engaging in a felony" while serving as a city commissioner.

Miro was for years one of Carollo's closest allies. But the pair infamously had a falling-out after Miro claimed he witnessed Carollo use city funds to buy paella and other supplies for Diaz de la Portilla's 2018 county commission campaign — actions that, if true, are transparent violations of the law. Miro then alerted the authorities about his boss' conduct and has repeatedly claimed he was fired in retaliation for cooperating with law enforcement.

Now Miro has filed a formal wrongful-termination suit against the City of Miami. Among the astounding claims in the suit, Miro says he was fired less than a week after Carollo found out the aide had spoken to investigators.

In the legal complaint, Miro opens by claiming he was essentially betrayed after he witnessed Carollo breaking the law while in office:


Steven Miro was a long-time Joe Carollo loyalist. But Joe Carollo, a Miami City Commissioner with a history of public fraud and outlandish behavior, was engaged in a felony. He used City of Miami funds and resources to benefit the campaign of Alex Diaz de la Portilla, a then-candidate for the Miami-Dade County Commission. He brought his knowledge of the public fraud to the attention of the City of Miami. After bringing it to the attention of the City, Miro learned that Joe Carollo was (and remains) the subject of one or more criminal investigations for public corruption. Starting on approximately May 9, 2018, Miro cooperated as a witness for the government while he remained employed by the City.

Carollo's chief of staff, Jose Suarez (who is referenced in the lawsuit), tells New Times that "the commissioner looks forward to addressing this in court."

The city, likewise, has not yet responded to the complaint in court. But this is neither the first allegation of criminal conduct against Carollo nor the first time Miro has sparred with the commissioner in public. As a longtime city commissioner and former Miami mayor, Carollo earned the nickname "Loco Joe" after baselessly accusing his opponents of being communist spies. Over the years, he's been repeatedly accused of breaking the law over; notably, he was arrested in 2001 for throwing a terra cotta tea container that struck his wife in the head. (Prosecutors dropped the charge after Carollo completed anger management counseling.)

Carollo vanished from Miami politics for a few years after his mayoral term ended, but following a stint as Doral's city manager, Carollo ran once again for Miami City Commission and won a seat in 2017. His tenure since then has been contentious. In mid-2018, blogger Elaine de Valle broke the news that Carollo had axed Miro after the aide reported the paella incident to authorities. Since then, Carollo has claimed Miro was terminated for sexually harassing other members of the staff. (Miro denies the allegation and in his latest suit says Carollo made up that claim.)

Miro also spoke to the Miami-Dade County Commission on Ethics and Public Trust during the fallout from the Fuller mess. In transcripts obtained by New Times, Miro told ethics investigators Carollo pressured him to lie to county officials to cover up the attacks Carollo wanted to launch on Fuller's businesses.

Now Miro has laid out a startling new set of allegations in his legal filing. Among other accusations, he claims Carollo found out either May 31 or June 1, 2018, that Miro had spoken to law enforcement about Carollo's potential campaign finance violations. Carollo fired Miro June 4.

Miro says he repeatedly complained to other district employees that he didn't believe the events were legal but was repeatedly rebuffed; one co-worker simply responded, "Joe is Joe." In early May, Miro warned City Manager Emilio Gonzalez and Mayor Francis Suarez that the campaign events seemed less than legal. Then, Miro says, the State Attorney's Office contacted him May 9 after receiving an anonymous tip that Miro was worried Carollo was breaking the law.

"Jose Suarez, and by extension Commissioner Carollo, must have been alerted to the pending investigation," the suit states. "On Friday, June 1, 2018, Jose Suarez requested a meeting with everyone working for Commissioner Carollo, but requested that Miro not be present. When the employees returned from the meeting, the employees began scanning their emails in what appeared to be an effort to search for and purge evidence of misconduct."

June 4, Carollo fired Miro. (He included a copy of his termination letter in an exhibit attached to the suit.) Miro says that, before getting canned, he'd never been the subject of a complaint or disciplinary action and that Carollo's then-chief of staff, Richard Blom, said Miro was being fired for "unspecified allegations" made against him.

From there, Miro says, Carollo asked city officials to search Miro's computer files "in an attempt to find something the City could use to justify his termination after the fact." Carollo allegedly asked the city to hire an outside investigator to trawl through Miro's documents, which cost the city an additional $30,000. Miro also says City Manager Emilio Gonzalez, who has the power to hire and fire city officials, refused to terminate Miro, but Carollo unilaterally fired him on his own.

Astoundingly, Carollo then instructed underlings to draft four administrative complaints against Miro in order to reverse-engineer a justification for his termination, he says.

"The City never conducted any investigation," the suit reads. "The City did not advise Miro of any of the allegations against him. The City never interviewed Miro to ask for his version of events. The City deprived Miro, a public employee, of basic due process."
KEEP MIAMI NEW TIMES FREE... Since we started Miami New Times, it has been defined as the free, independent voice of Miami, and we'd like to keep it that way. With local media under siege, it's more important than ever for us to rally support behind funding our local journalism. You can help by participating in our "I Support" program, allowing us to keep offering readers access to our incisive coverage of local news, food and culture with no paywalls.
Make a one-time donation today for as little as $1.