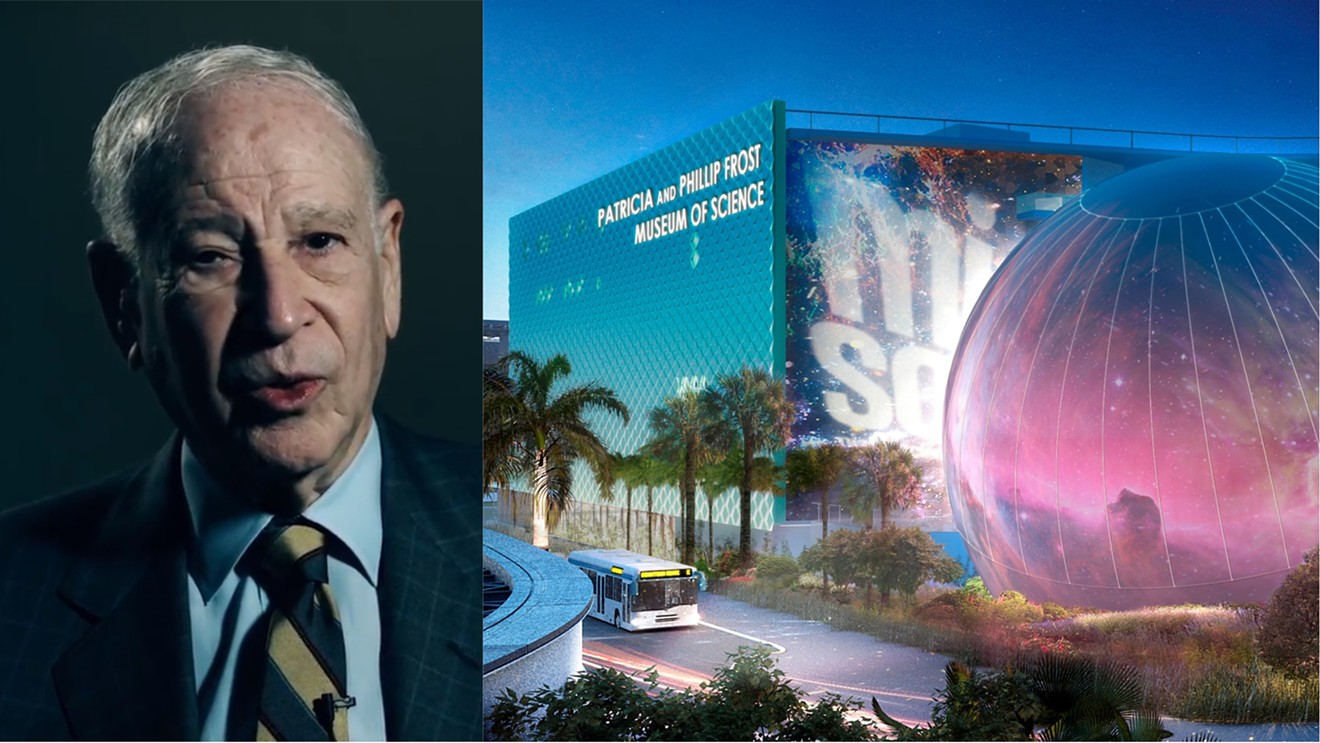 Billionaire, executive, and Phillip Frost received the key to the City of Miami in May 2017 after he and his wife, Patricia, donated $35 million and slapped their names on the side of downtown's flagship science museum. Since then, Frost's reputation has plummeted: The Securities and Exchange Commission this past September accused him and his company, Opko Pharmaceuticals, of engaging in a gigantic stock-fraud scheme worth $27 million.

Opko's stock price plummeted. Numerous investors then sued the billionaire and his companies. Frost last month paid out a $5.5 million settlement without admitting guilt, while Opko chipped in another $100,000.

But that has not ended talk of Frost's allegedly shady business deals. A new suit is raising more questions. On December 31, an Opko investor named Connie Wendt sued Frost in Miami federal court. The suit alleges he took part in additional questionable investing schemes not mentioned in the SEC's filings. Among them: Frost also had a hand in a dubious cryptocurrency-investing company, a vaccine manufacturer, and a biotechnology firm. The lawsuit alleges those three companies — Riot Blockchain, VBI Vaccines, and , respectively — shared extremely similar business tactics with the companies mentioned in the formal SEC complaint, and that some even shared employees with companies targeted by the feds.

Frost's lawyer, Robert Anello, declined to speak yesterday after being sent a copy of the new complaint. "We are not going to comment on this because it is active litigation," Anello said via email.

Back in September, the federal government alleged Frost was part of a small core of stock fraudsters who engaged in what the feds said were classic "pump-and-dump" stock schemes. In other words: A group of power investors allegedly found worthless stocks, agreed in secret to all invest at once, then told everyone else to buy up the "hot" stocks. Then they sold their newly expensive shares and laughed as the stock price fell once again. Regular investors were allegedly left holding the bag.

The SEC said Frost's group (led by another investor named Barry Honig) ultimately engaged in three schemes worth a total of $27 million. Frost was accused of participating in two of the three — he even allegedly used Opko to send out press materials begging unsuspecting victims to buy up the fraudulently inflated stocks.

Frost steadfastly denies he did anything wrong.  “We have reached with the SEC that will end a potentially expensive, contentious and time-consuming litigation and I am happy that we can focus on an exciting and productive 2019 for OPKO Health,” he was quoted as saying in a late-December press release.

But the new suit alleges further misconduct that Frost has not addressed. Most notably, it accuses Frost and others of turning a veterinary biotechnology firm called "" into "Riot Blockchain" — a completely different, Bitcoin-related enterprise — virtually overnight. Frost and company allegedly then sold inflated shares in that enterprise during the 2017 cryptocurrency boom. The SEC did not include Riot Blockchain in its September complaint — but it did charge Riot's then-CEO, John O'Rourke, with taking part in the same three schemes as Honig and Frost.

Riot Blockchain's case was so outlandish that CNBC in February 2018 published a significant investigation into the company: CNBC reported that after the company changed its name from "" to "Riot Blockchain," share prices skyrocketed from $8 to nearly $40. The suit also notes that Honig, Frost's alleged in the SEC case, was involved in operating Riot as well. Riot's stock has since fallen back down. (O'Rourke released a long letter to stockholders calling CNBC's reporting a "negative, one-sided" story.)

According to the lawsuit:

On February 16, 2018, CNBC published an in-depth report which made it clear that Riot’s blockchain business was not what it seemed. The investigation raised a number of red flags, including, inter alia: (i) Riot had no real involvement with the cryptocurrency or blockchain business; (ii) its name change and business plan pivot were suspicious and likely to attract SEC scrutiny; (iii) insiders had sold substantial amounts of personally-held stock at suspicious times; and (iv) the relationships between some of Riot’s officers and directors and defendant Honig were cause for concern.


But the suit does not end there. It also alleges Frost gained control of a vaccine manufacturer called VBI and encouraged the company to merge with a different firm called SciVac — in which Honig and another alleged member of the pump-and-dump crew owned substantial stock. The suit says Frost and his cohort in 2015 used the same press-release-marketing factory to pump out positive news coverage encouraging others to invest in VBI. The suit goes on:

Following the October 26, 2015 public announcement of the merger, the Frost Pump-and-Dump Posse carried out coordinated schemes to boost the stock price of VBI. This, of course, included promotional articles written by the same authors as the schemes included SEC Complaint. One example is a paid article posted on Biotechstocks.com, titled “A Merger Involving Two Pioneering Biotech Titans Just Happened & It Doesn’t End There!”, which highlighted Frost’s involvement and his excellent track record. In exchange for publishing the article, BiotechStocks.com was paid $30,000 “for visual sponsorship on BiotechStocks.com and for visual placement of VBIV. [sic] within written materials.”

The suit also alleges that Frost, Honig, and other alleged had a hand in investing in a third company, biotech firm , which, the suit notes, has itself been hit with class-action litigation for making allegedly false and misleading statements to investors.

Now that the news has broken, Opko's stock price has fallen and some Opko investors want Frost to pay up.

"As a direct and proximate result of the OPKO Individual Defendants’, the Frost Pump-and-Dump Posse’s, and the Frost Entities’ conscious failure to perform their fiduciary obligations, OPKO has sustained significant damages," the suit reads. "As a result of the misconduct alleged herein, the defendants are liable to the Company."
KEEP MIAMI NEW TIMES FREE... Since we started Miami New Times, it has been defined as the free, independent voice of Miami, and we'd like to keep it that way. With local media under siege, it's more important than ever for us to rally support behind funding our local journalism. You can help by participating in our "I Support" program, allowing us to keep offering readers access to our incisive coverage of local news, food and culture with no paywalls.
Make a one-time donation today for as little as $1.