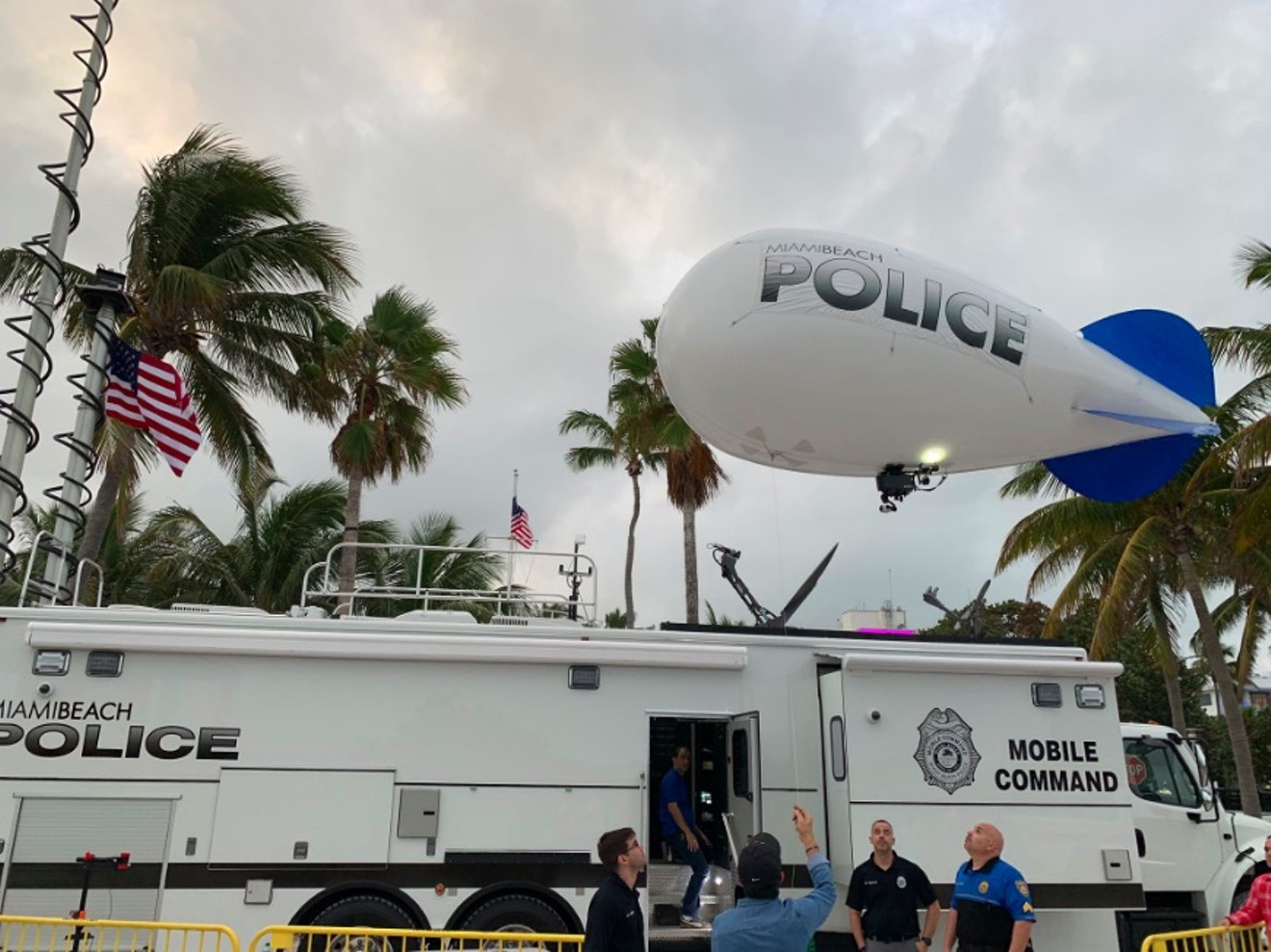 On December 28, MBPD flew a tiny, helium-filled dirigible, or "tethered aerostat," over an Orange Bowl-related party called the Capital One Beach Bash. A camera attached to the balloon monitored the moves of 15,000 patrons, according to a letter City Manager Jimmy Morales sent to the city's commission on January 3.

Amazingly, Morales' letter admits cops bought the "tethered" surveillance balloon to get around the state's ban on police drone surveillance. (The ban, passed in 2015, was dubbed the Freedom From Unwanted Surveillance Act.)

"Due to the legal restrictions placed on police departments under Florida law and because of limited battery life and flight time, Unmanned Aerial Vehicles (aka "drones") are not a current option for the Miami Beach Police Department to monitor crowds from the air at large gatherings at major events," Morales' letter states. "As crowds at major events here in the city have increased in size over the years, and given the emergence of new threats of terrorism seen around the world in such large gatherings, the department sought to acquire a new technological solution for aerial monitoring."

Later in the letter, Morales opines that the small dirigible "provided an ideal vantage point in an unobtrusive manner, with a sleek, yet friendly look."

Of course, there are major questions as to whether MBPD's new "tethered" surveillance balloon violates Florida's police-drone ban.

MBPD spokesperson Ernesto Rodriguez said yesterday the department tested a similar surveillance device during Memorial Day Weekend in 2017 but did not find it useful. However, during spring break of 2018, the department began testing the current balloon device as part of a trial program, Rodriguez said. MBPD tested the balloon again during Halloween 2018 before ultimately deciding to buy it. Rodriguez said he could not immediately say how much the blimp cost or where the department bought it. He said MBPD felt confident it was not violating state law.

"This tethered balloon is new technology and we do not feel we are in violation of the law," he said. "This is new technology, it's smart tech, and it's safe tech that we’re using to keep folks safe during large events."

But it's unclear whether the blimps violate the drone ban. There appear to be few differences between the "tethered aerostat" and a traditional drone, minus the aerostat balloon's stationary location and inability to be flown by remote control. In fact, the devices are so similar that one website selling "tethered aerostats," BlimpWorks.com, refers to the balloons as "lighter-than-air drones." A different, Jacksonville-based company that sells tethered aerostats is literally called "Drone Aviation." 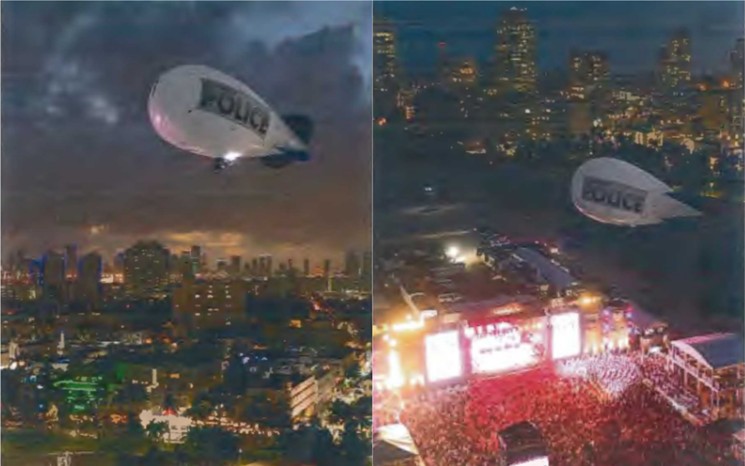 Like many advances in police technology, tethered aerostats were used by the military and federal government before cops started buying them. In 2012, the BBC wrote that the wars in Iraq and Afghanistan had "given rise to a new renaissance of lighter-than-air vehicles" and that "hundreds of aerostats have been sent to [the region] to help protect forward operating bases" and surveil alleged enemy combatants. Some military-grade aerostats can fly as high as 15,000 feet.

Similar police-surveillance plans in South Florida have caused outcry. In 2017, New Times broke the story that Miami-Dade County Police had quietly planned to start monitoring gigantic swaths of the area using camera-equipped Cessna planes and artificial-intelligence technology. (That technique, called wide-area surveillance, was first developed in 2006 to aid the military during the Iraq War.) After applying to obtain the technology, MDPD then attempted to get retroactive approval from the county commission — but was forced to abandon the plan after the American Civil Liberties Union and other activist groups protested it.

MBPD has also been somewhat surveillance-happy in recent years. Police Chief Daniel Oates has previously pushed the state to let his department install license-plate-scanning technology on every causeway leading to  Miami Beach. The department can't install permanent plate-readers on the causeways since those are state-run roads.

Miami Beach state Rep. Michael Grieco, the former city commissioner who resigned and later pleaded no contest to criminal campaign-finance violations, cosponsored a bill on December 4 that would, if enacted, legalize the exact type of drone crowd surveillance MBPD is now using. Grieco told New Times yesterday evening that he did not come up with the idea and merely signed on to a bill from Republican state Rep. Clay Yarborough of Jacksonville. Grieco claimed the cosponsorship was a coincidence. (As a city commissioner, Grieco once filed an ACLU-supported bill designed to limit MBPD's use of surveillance technology.)

MBPD's Rodriguez said Chief Oates was "aware" of multiple bills attempting to expand police drone usage but the department had not spoken to Grieco. Grieco said the same.

"I have not communicated with MBPD on this issue," he messaged New Times. He added later: "If the proposal went any further, I would not support it, as I would have major concerns about civil-liberty violations and possible abuse by law enforcement for surveillance purposes."
KEEP MIAMI NEW TIMES FREE... Since we started Miami New Times, it has been defined as the free, independent voice of Miami, and we'd like to keep it that way. With local media under siege, it's more important than ever for us to rally support behind funding our local journalism. You can help by participating in our "I Support" program, allowing us to keep offering readers access to our incisive coverage of local news, food and culture with no paywalls.
Make a one-time donation today for as little as $1.