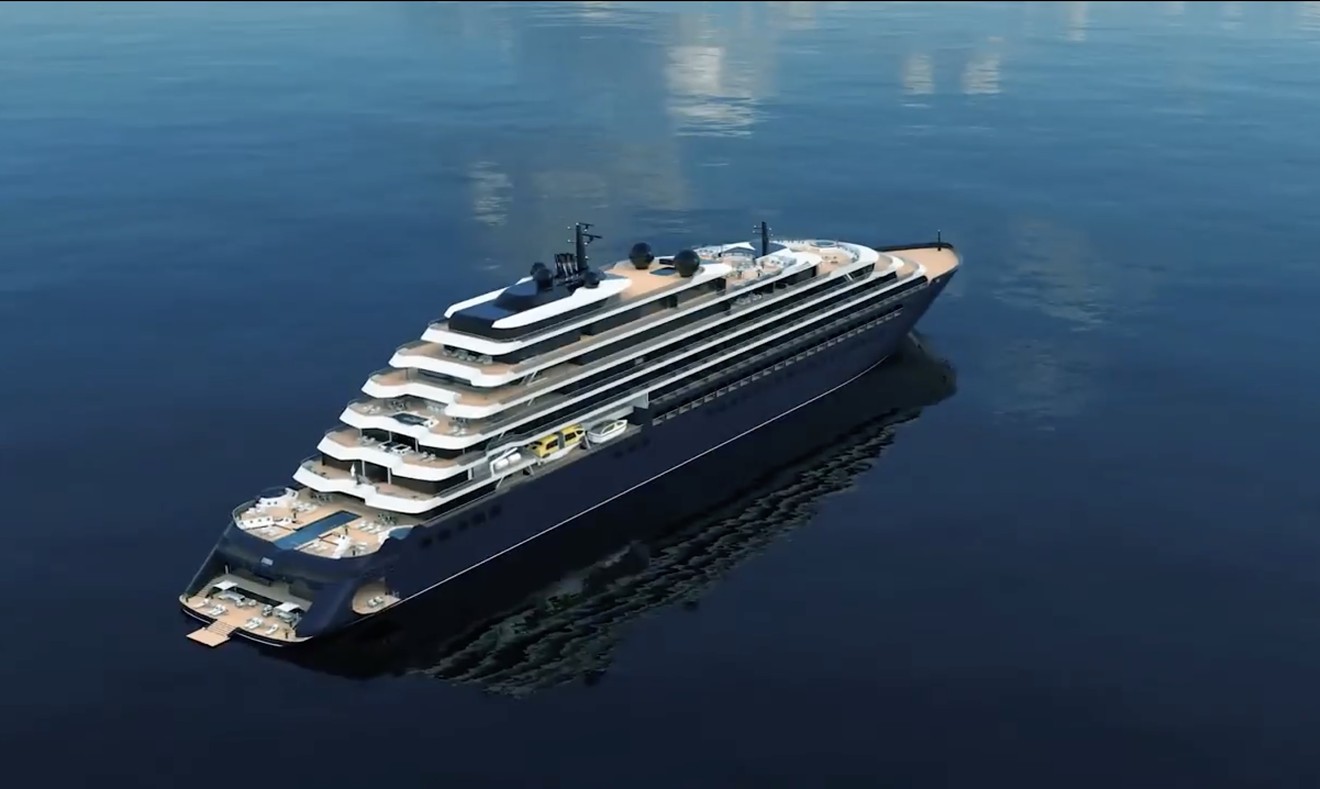 Ritz-Carlton Yacht Collection rendering of the megayacht Evrima Screenshot via Travel2u/YouTube
In a pair of lawsuits playing out in South Florida federal court, a half-dozen former members of the Miami sales team at the Ritz-Carlton's new cruise company allege that their bosses attempted to force them to suppress their accents and "sound more British" and then fired or otherwise retaliated against them for their refusal to do so.

In one of the suits, seasoned salesman Pablo Martinez claims that his supervisor instructed him to suppress his Hispanic accent, to which he responded by pointing out, "I'm an immigrant. I have an accent. That will never change no matter how hard I try."

Martinez claims the criticism of his accent took him by surprise because he had more than a decade of cruise-industry experience and had maintained solid sales numbers even as the industry ground to a halt during the COVID-19 pandemic. A native of Venezuela, Martinez moved to the United States in 2001 and became a top agent at Norwegian Cruise Line. He claims he left a lucrative position at Silversea Cruises to join the Ritz-Carlton's fledgling cruise company, the Ritz-Carlton Yacht Collection, in 2019.

According to Martinez, executives at the company seemed to think the Hispanic accents of the Miami sales team didn't align with the Ritz-Carlton luxury brand. In the fall of 2020, he claims, the cruise line instituted a policy that pushed him and his coworkers from the Miami crew to "sound more British." A supervisor based in Malta picked out a recording of a European sales agent and told the South Florida employees to emulate that agent's voice.

The company removed Martinez from the Miami sales team and fired several of his coworkers after they spoke out against the directive to ditch their natural accents, the lawsuit alleges. Citing a hostile environment, Martinez took a medical leave in November 2020 and resigned in early 2021.

"This has caused tremendous physical, emotional pain and income loss for me. I have had extreme anxiety and depression, even panic attacks," he wrote to his superiors prior to taking the leave.

Martinez filed his lawsuit alongside two former coworkers. They allege that the cruise line tried to "whitewash" local employees' Hispanic accents and other dialects.

"We fully intend to prove the Ritz-Carlton Yacht Collection retaliated against our clients after and because they opposed employment practices which they believed disregarded their immutable linguistic characteristics," Brett Kaplan, the workers' attorney, tells New Times.

The Ritz-Carlton Yacht Collection denies that it discriminated against the plaintiffs. Rather, the company claimed in a motion to dismiss the case that it implemented a new, longer sales script in September 2020 that "resulted in a revolt by" the Miami team.

The plaintiffs contend that the cruise line tried to "whitewash" local employees' Hispanic accents and other dialects.

According to the company's version of events, after some members of the team complained about unfamiliar phrases in the new marketing script, they were allowed to use their own script. But sales continued to decline amid the pandemic, prompting a reduction in staff. Workers were selected for layoffs based on performance, not because they objected to alleged discrimination, the company asserts.

The plaintiffs beg to differ.

They argue that top-performing agents who challenged Ritz-Carlton's accent policy were let go while coworkers with inferior sales performance remained on staff.

One plaintiff who spoke out against the policy, Bianca Douglas, claims in court documents that she was singled out for termination despite logging the top monthly sales numbers on her team. She managed to generate $345,000 in booking revenue for the company in October 2020 — at the height of the pandemic-induced paralysis of the cruise industry — she alleges. A month later, she was fired. She had a reputation in the industry for stellar sales and produced roughly $3.5 million in revenue for the Ritz-Carlton Yacht Collection in 2020, according to court documents.

Douglas and others had spoken out about the accent policy at a September 2020 videoconference with management that is cited in the lawsuit.

"I will never sound British over the phone," Douglas said during the meeting. "I will do my best to talk properly. But I'll tell you this: I'm a salesperson, and I'll get a sale...That's what I know how to do."

Douglas claims that in addition to being subjected to discrimination based on her dialect, she was humiliated when a Ritz-Carlton executive, David Fredericks, asked her if she "lived in the ghetto." Douglas, a Black woman of Jamaican origin, alleges that Fredericks treated her more harshly than he treated white employees, at times scolding her for no good reason. In addition, she claims he interfered with a job opportunity at another cruise line after the Ritz-Carlton Yacht Collection fired her.

The claim that the company engaged in accent-based discrimination is backed up by former sales team leader Frances Milian, a co-plaintiff in the Martinez lawsuit. She alleges that during routine meetings, company executives suggested the Miami team needed to change their accents to "sound more 'refined,' 'upscale,' and 'ritzy.'" She says her supervisors were infuriated at her when employees working under her spoke their minds during the September 2020 videoconference.

Milian was among the staff members who were fired in November 2020. She alleges that the company let her go because she'd supported her team's objections to the accent-refinement policy.

"I will never sound British over the phone. But I'll tell you this: I'm a salesperson, and I'll get a sale."

The Ritz-Carlton Yacht Collection has not responded to New Times' request for comment. In court filings, the company maintains that it "evaluated performance reports and similar documentation to determine which employees were to be terminated." It denied that Bianca Douglas was subjected to racially motivated harassment.

On May 27, U.S. District Judge Beth Bloom rejected the company's attempt to dismiss the first lawsuit filed by the former sales agents. The judge found that the case adequately elucidated the alleged violations of state and federal employment law.

The ruling pushes the lawsuit one step closer to a trial.

As for Martinez, the judge rebuffed Ritz-Carlton's argument that he has no case because he resigned as opposed to being fired. Martinez's claims that his sales leads were stripped from him and that he was later dismissed from the sales team are sufficient to show potentially illegal retaliation, the judge ruled.

The court has not yet ruled on the second lawsuit filed on April 13 by three former employees who made similar claims.

Federal courts across the nation have found that punishing or mistreating an employee on the basis of their accent can amount to national origin discrimination, which is illegal under Title VII of the Civil Rights Act of 1964. But employers that are sued for accent-based discrimination under Title VII may defend themselves by arguing a worker's accent interferes with communication skills or job performance. (Ritz-Carlton has not taken that tack in the current litigation.)

Ritz-Carlton's maiden cruise is set for August aboard its first completed ship, the 623-foot megayacht Evrima, according to a story in the trade publication Seatrade Cruise News. The parent company, known for its portfolio of more than 100 luxury hotels around the world, is a subsidiary of Marriott International. It announced it was breaking into the cruise industry in 2017.

The maiden voyage had been scheduled for February 2020, but COVID brought the cruise industry to a standstill for more than a year and delayed the completion of the Evrima.

In his lawsuit, Martinez claimed he and his coworkers were put in the position of handling reservations for cruises that were bound to be incessantly delayed. Angry customers would flood the phone lines as the future of the Ritz-Carlton Yacht Collection hung in the balance.

"All of this gave way for the company to reveal the worst of itself, subjecting plaintiffs and their coworkers to the most hostile work environment they have ever experienced," his lawsuit alleges.
KEEP MIAMI NEW TIMES FREE... Since we started Miami New Times, it has been defined as the free, independent voice of Miami, and we'd like to keep it that way. With local media under siege, it's more important than ever for us to rally support behind funding our local journalism. You can help by participating in our "I Support" program, allowing us to keep offering readers access to our incisive coverage of local news, food and culture with no paywalls.
Make a one-time donation today for as little as $1.
Izzy Kapnick is a freelance writer for Miami New Times, covering environmental law, white-collar crime, and the healthcare industry. He has worked as a legal news reporter in South Florida since 2008.
Contact: Izzy Kapnick