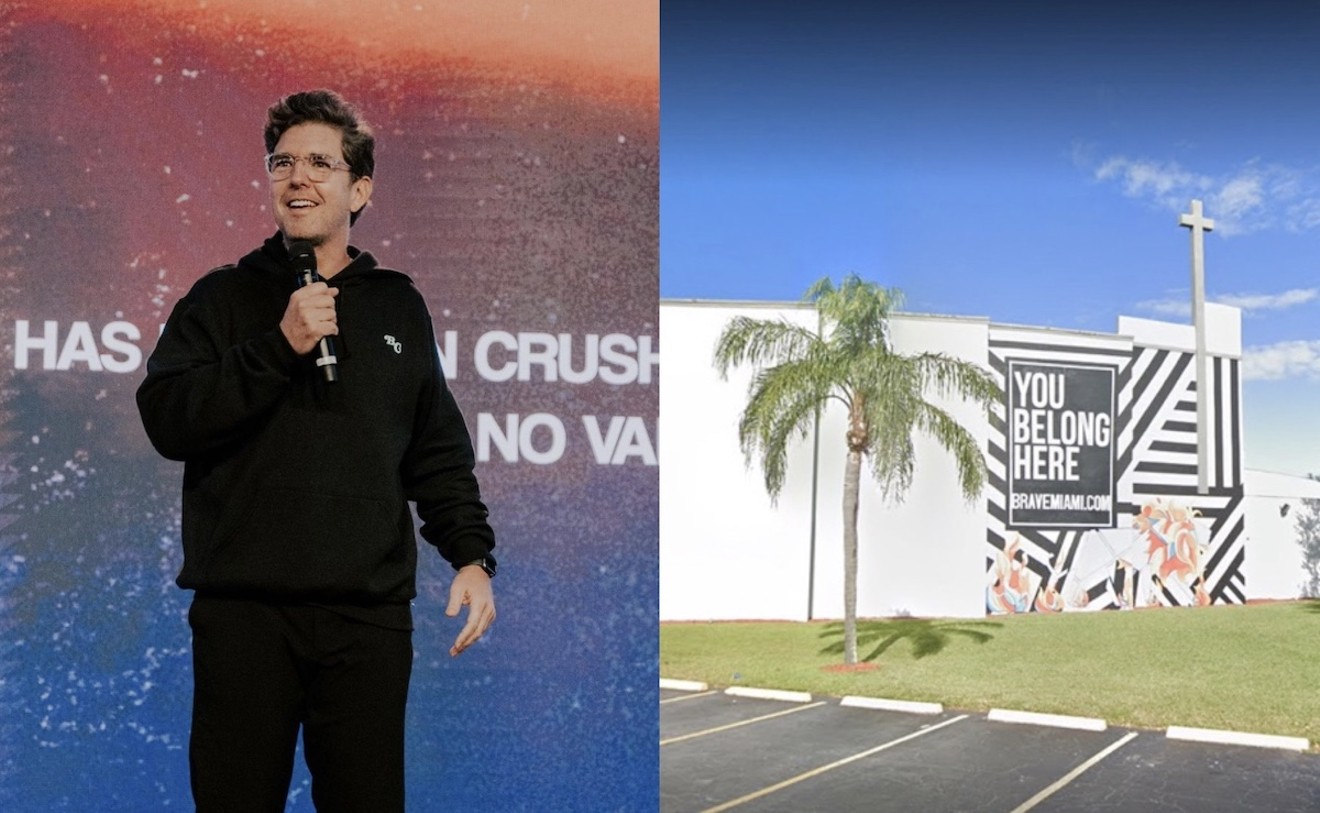 A lawsuit claims that Miami pastor David Stocker used church money to fund his affair with a congregant. Screenshot via Instagram/Screenshot via Google Maps
Update published 7/8/22: On July 6, PenFlorida, Brave Church, and the four board members named as defendants in the lawsuit detailed below filed a joint stipulation dismissing the matter subject to the terms of their settlement agreement. It’s unclear what this means for pastor David Stocker, Jr., who remains a defendant in the suit.)

The original story is below:

In May 2019, about a month after taking a woman from his church on a first date, David Stocker, Jr., flew her out to New York City to partake in all the quintessential touristy activities in the Big Apple: visit Broadway, snap photos around Times Square, ride in one of those cheesy horse-drawn carriages. The couple returned the following month to stay at a luxe hotel in the Lower East Side, snapping intimate photos and selfies along the way.

Some would consider this romance. But worshipers at Brave Church, the Miami congregation where Stocker served as pastor, likely disagree.

According to a 307-page lawsuit filed on May 24 by Peninsular Florida District Council (PenFlorida) — an Assemblies of God umbrella organization that oversees more than 300 churches in Florida and the Virgin Islands, including Brave Church — Stocker violated church bylaws by engaging in sexual relations with at least three congregants and using the church's credit card to fund at least one of the affairs, then refusing to step down as pastor after PenFlorida investigated and found him guilty of "gross sexual misconduct and immoral actions."

The lawsuit, filed in Miami-Dade Circuit Court, names Stocker, Brave Church, and four members of the church's board of directors, alleging that the board repeatedly ignored PenFlorida's findings and discouraged congregants from reporting Stocker for fear of ruining his career.

"PenFlorida found that Stocker is guilty of sexual misconduct based on significant evidence that he was sexually involved with at least three separate women from the congregation, all while he was not married to them and some while he was still legally married to his now ex-wife," the complaint states.

"Brave Church of Miami, Inc. and its board have amicably resolved the matter with the Peninsular Florida District Council," attorney Kristin Ahr informed New Times in a written statement. Ahr, a partner at Nelson Mullins, the firm that's representing Brave Church and the board members, cited "significant misunderstandings" between Brave Church and PenFlorida, which have been resolved through a "very friendly settlement."

She offered no specifics regarding the misunderstandings or the settlement but confirmed that Brave Church remains affiliated with PenFlorida and the Assemblies of God — though not with Stocker.

Brave Church offers contemporary worship services at its two locations in Westchester and Brickell. Its website touts the slogan "Leading People to Love People" and its Instagram (@bravemiami) is filled with photos and videos with vibrant graphics, smiling young faces, and a charismatic Stocker preaching onstage in casual streetwear or an all-black suit.

In 2014, Stocker and his then-wife Christina joined the church as youth pastors to reach younger generations of churchgoers. In a 2018 interview with VoyageMIA, the couple described their desire to help younger people realize that "church can be a place for everyone." (The couple divorced in 2020.)

"Our heart is to help those who might be in a struggle, repeating dead-end cycles, or the person just wanting to connect with others in a life-giving positive way," the Stockers said in the interview, though it's unclear who said what. "We believe there is place for everyone."

According to the lawsuit, the woman Stocker brought to New York City reported him to PenFlorida in January of this year and provided board members with hundreds of text messages, photos, and videos detailing their affair. She informed them that Stocker was sleeping with at least two other women from the congregation and had used church funds for his liaisons on at least two occasions, including for her flight and hotel room during their time in New York. (In addition to their New York trips, Stocker and the woman also allegedly traveled to San Francisco and San Diego in 2019.)

The woman subsequently discovered that Stocker was also seeing a second woman, and in November 2021, she learned that the pastor was "romantically involved" with a third woman — all while he was still with her, and while he was still legally married to his then-wife, according to the lawsuit.

Stocker and a woman got "so drunk" at a Celtics-Heat game on November 4, 2021, that they walked onto the basketball court, according to a witness statement.
Screenshots via PenFlorida v. Brave Church, et al.
The suit also alleges that Stocker abused alcohol (behavior the Assemblies of God does not condone) and acted "erratically" on numerous occasions. The complaint includes a statement from a witness who claims to have seen Stocker and a woman get "so drunk" at a Celtics-Heat game in Miami on November 4, 2021, that they walked onto the court. When Miami police officers intervened, the witness claimed, Stocker "got very angry and aggressively screamed at the police."

It's unclear whether either party was detained or arrested.

An initial case-management conference for the parties in the lawsuit is scheduled for August 15.

Glen Waldman, a Miami-based attorney representing PenFlorida, tells New Times that if the "confidential settlement" with Brave Church is executed as expected, the lawsuit is unlikely to move forward.

Waldman says he's "pleased" that Brave Church will remain an Assemblies of God institution, an outcome he believes is for the benefit of all involved — particularly the church's congregants.

"We look forward to moving together to make a better and greater church for all the congregants and the people that worship there," the attorney tells New Times.