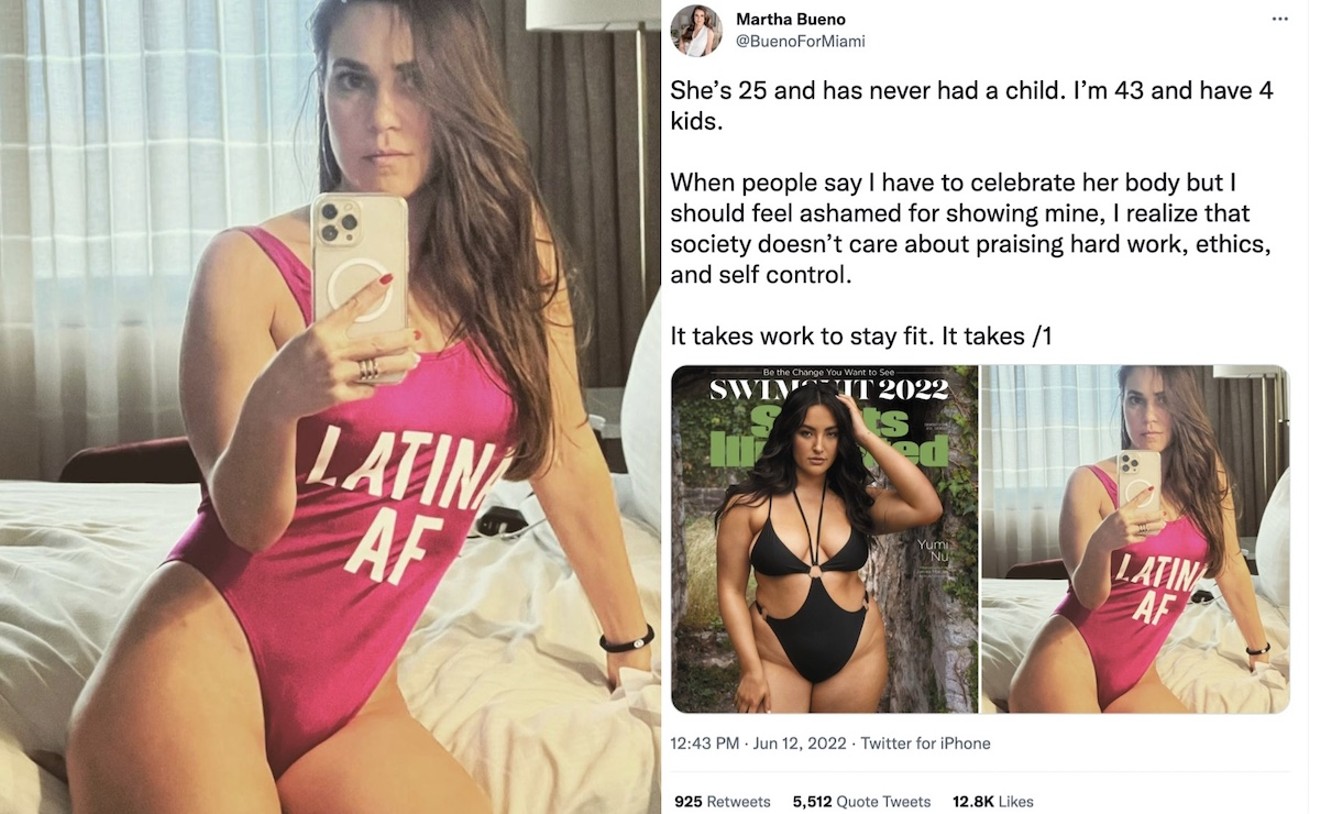 Miami-Dade Commission candidate Martha Bueno says she had no intention to cause "pain or hurt." Screenshots via @buenoformiami on Instagram and Twitter
After spending the afternoon in a hot tub in Reno during the 2022 Libertarian National Convention in late May, Martha Bueno returned to her hotel room and snapped a mirror selfie of herself in a pink, one-piece bathing suit with the words "LATINA AF" printed on the front. The Libertarian politician and Miami native shared the photo on Instagram at the time, with a caption about speaking with California couple about freedom and a link to the fundraising platform for her campaign for Miami-Dade County commissioner in District 10, which includes portions of Kendall, Westchester, and Fontainebleau and is currently represented by term-limited Commissioner Javier Souto.

Earlier this week, she posted the selfie again. This time, though, she juxtaposed it beside a photo of plus-size model Yumi Nu gracing the cover of Sports Illustrated's recently released 2022 swimsuit edition. The tone of the caption was different this time.

"She’s 25 and has never had a child. I’m 43 and have 4 kids," Bueno tweeted. "When people say I have to celebrate her body but I should feel ashamed for showing mine, I realize that society doesn’t care about praising hard work, ethics, and self control."

She didn't stop there.

"It takes work to stay fit," she continued. "Dedication and control to eat right and work out," she writes. "If you’re wondering when I’m going to take down my body pictures, I won’t. I’m proud of myself. I’m a mom, a wife, an activist, an entrepreneur, and a politician. Join me. Post what makes you proud. #positivity."

When people say I have to celebrate her body but I should feel ashamed for showing mine, I realize that society doesn’t care about praising hard work, ethics, and self control.

It takes work to stay fit. It takes /1 pic.twitter.com/jXelcQIvfh

As of Wednesday evening, Bueno's Twitter thread had garnered more than 12,800 likes, 900 retweets, and 5,000 quote tweets. The majority of respondents call her out for body-shaming and bullying Nu, who made history as the first plus-size Asian American model to appear on the cover of Sports Illustrated's vaunted swimsuit edition.

"Both of your bodies look beautiful, but only one of you sounds like a complete asshole," reads a tweet from screenwriter Meaghan Oppenheimer.


Both your bodies look beautiful, but only one of you sounds like a complete asshole. (It’s you, Martha, you sound like an asshole.) https://t.co/9mStA6SMWA

"why do you think someone else's body being celebrated is a direct attack on yours?" asked a video producer for Insider.


why do you think someone else’s body being celebrated is a direct attack on yours? https://t.co/wPjFW53g5V

"ma'am we do not fucking care," another commenter offered.


ma’am we do not fucking care https://t.co/5fmYlqyNU5

In a phone interview with New Times, Bueno clarifies that she is by no means "a cruel person" and had no intention to cause anyone "pain or hurt" when she published her trio of tweets on Sunday. But in the same way that people have applauded Nu for her cover, she says, they've also criticized people like her with thinner body shapes.

Although a number of people would (and did) disagree with Bueno, she maintains that she was actually being positive in her tweets.

"I don't understand how anyone thinks that I was shaming her — she is literally on the cover of one of the most coveted magazines in America, right? She's beautiful," Bueno tells New Times. "But just the same way that she is celebrated for being there, people sometimes act the opposite way towards other people."

She went on to imply that being overweight is a health hazard, citing a figure from the U.S. Centers for Disease Control and Prevention (CDC) that found 78 percent of people who have been hospitalized with COVID-19, needed a ventilator, or died were overweight or obese.

"As a mother of four, two are over the age of 18 and two are teenagers, I worry about the message we're sending to kids," Bueno says. "This shaming of people for saying something that goes against the popular narrative is worrisome to me."

A Florida Politics profile from last year noted that Bueno, a Libertarian who formerly served as vice-chair of the party's Miami-Dade chapter, is a cannabis and cryptocurrency advocate. In 2018, she was elected chair of Miami-Dade Community Council Area 11, which covers West Kendall and is tasked with making zoning and land-use decisions.

Last February, she announced that she would be running for the District 10 seat in Miami-Dade, where she faces three challengers: Republican State Rep. Anthony Rodriguez, who has represented the 118th District since 2018, IT tech company owner Julio Cesar Sanchez, and former federal law enforcement agent Susan Khoury. According to campaign-finance records, Rodriguez has raised more than $230,000 — the largest war chest among the candidates. Bueno has raised just over $20,000.

Photos shared online by the Twitter account Miami Against Fascism show Bueno posing with at least one member of the far-right Proud Boys. Bueno tells New Times she was unaware who they were when the photos were taken and, other than that one interaction, doesn't know what the Proud Boys stand for and does not promote them.

According to Bueno, the far-right group Floridians' First Miami-Dade — which bills itself as a "grass roots organization" but is believed to be a more palatable front for local Proud Boys following the January 6 insurrection — had messaged her on Instagram asking to attend the weekly Pastelito Meetup she holds in her district, which she says is open to anyone.


Martha Bueno is no buneo for Miami. 🚫🌴

She’s running for Miami Dade Commission District 10 and backed by members of the far-right hate group and gang, the Miami Proud Boys.

County commission seats are nonpartisan, and a total of five are up for grabs in the upcoming August 23 primary election. If no candidate secures more than 50 percent of the vote, the two candidates with the most votes will advance to a run-off election on Election Day, Tuesday, November 8.
KEEP MIAMI NEW TIMES FREE... Since we started Miami New Times, it has been defined as the free, independent voice of Miami, and we'd like to keep it that way. With local media under siege, it's more important than ever for us to rally support behind funding our local journalism. You can help by participating in our "I Support" program, allowing us to keep offering readers access to our incisive coverage of local news, food and culture with no paywalls.
Make a one-time donation today for as little as $1.