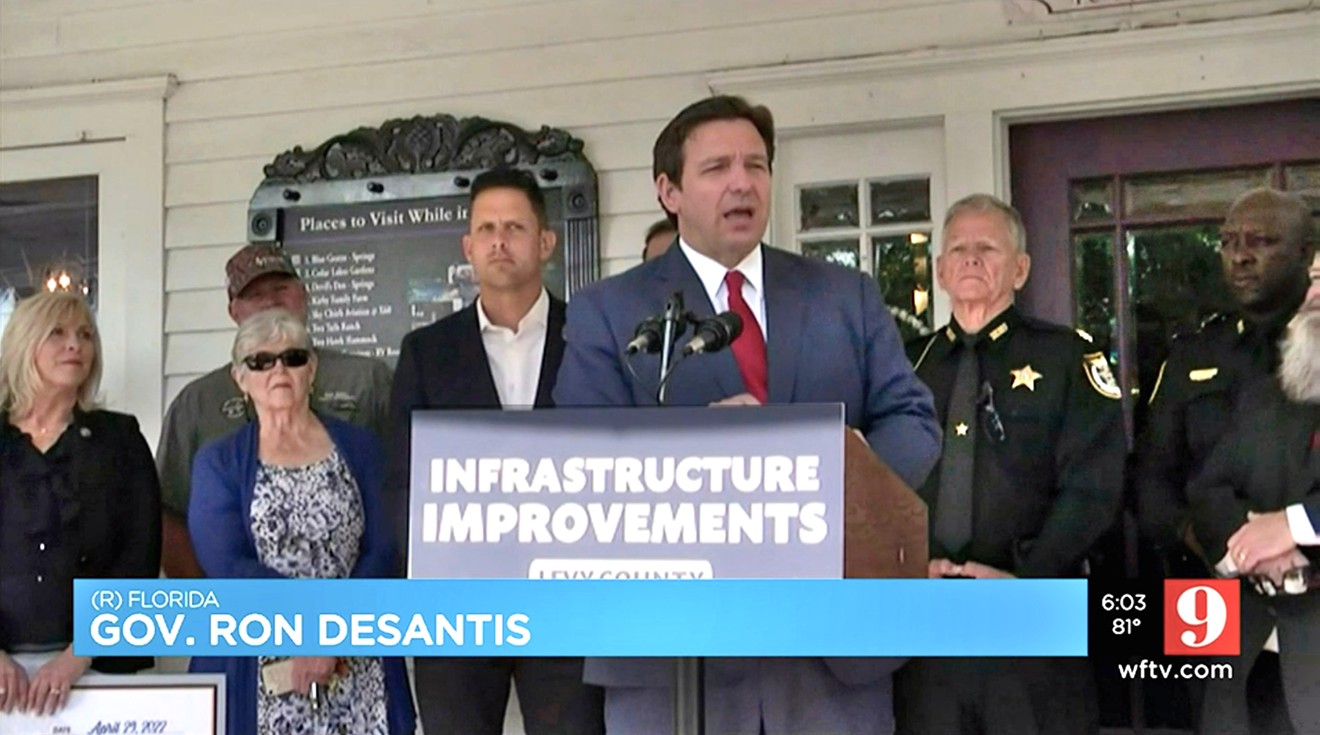 Florida Gov. Ron DeSantis vows to pass "constitutional carry" in Florida during a press conference on April 29, 2022. Screenshot via WFTV.com
In April, Florida Gov. Ron DeSantis promised to sign a bill that would remove the requirement to obtain a permit before carrying a gun in public. At an April 29 press conference, he assured a Levy County audience that the Republican-led state legislature "will get it done."

"I can't tell you if it's going to be next week or six months, but I can tell you that before I am done as governor, we will have a signature on that bill," DeSantis proclaimed, waving his hand across the podium in a signing motion.

Such a law would make Florida the latest in a wave of states that have adopted permitless gun carrying in public, AKA "constitutional carry." According to gun-safety group Everytown, 20 U.S. states have made the move to allow constitutional carry since January 2015, bringing to 25 the number of states that allow a person to carry a concealed gun in public without a permit.

At present, those seeking to obtain a concealed-weapons permit in Florida must complete a firearms training class, undergo a background check, and have their fingerprints taken, among other requirements. Supporters of the current process say that removing those measures will lead to a spike in robberies and homicides involving guns. (Notably, Florida is one of only three U.S. states that generally ban open carry.)

"To take the safeguards of the permitting process away is asking for trouble."

"We have 2.5 million concealed-weapons permit holders in Florida," Patricia Brigham, president of Prevent Gun Violence Florida, tells New Times. "To take the safeguards of the permitting process away is asking for trouble. If you're going to be carrying a concealed weapon in public, I think the firearms training is essential."

GVPedia, a gun-violence research group, asserts that a state's passage of permitless gun-carry laws correlates with a disproportionately high increase in gun homicide rates over the three years following the laws’ passage. Gun homicide rates in such states increased by 22 percent as compared to a 10 percent increase nationwide over the corresponding time periods, according to research released this past February by the Oklahoma-based nonprofit.

Permitless carry is the loosest category of concealed-weapons regulation, followed by so-called shall-issue regimes, which ensure people are entitled to a concealed-carry permit if they satisfy a basic application process. California, New York, and a handful of other states have long imposed a stricter, "may-issue" regulatory setup in which a person must provide justification for carrying a firearm. Many "may-issue" jurisdictions require applicants to attest that they're in danger and needed a firearm to protect themselves.

GVPedia's recent effort was aimed at rebutting a January report in which coauthors John Lott and Carl Moody suggested that violent crime and gun homicide rates in 13 states had remained flat over the five years after those states implemented constitutional carry.

(GVPedia described Lott and Moody's work as "riddled with errors and miscoded variables that render their entire analysis unusable." Lott claimed GVPedia's research failed to account for shifts in income levels and unemployment as well as other demographic variables that could influence crime rates.)

Donohue's study found that right-to-carry laws led to increases in gun-related violent crime and gun-related robbery by as much as 30 percent.

Examining crime rates in 47 major U.S. cities from 1979 through 2019, Donohue's study found that right-to-carry laws led to increases in gun-related violent crime and gun-related robbery by as much as 30 percent.

The study notes that surges in gun theft following adoption of right-to-carry laws put thousands of guns "into the hands of criminals or illegal gun market," contributing to the spike in crime. Other factors included a decreased rate at which police officers solve or clear crimes following the implementation of right-to-carry laws. "Burdens on police time caused by greater gun carrying, police hesitation to engage with a more heavily armed civilian population, or weakened police-community relations" could be at play after right-to-carry laws are passed, according to the study.

Donohue asserts that the newest research in the field incorporates advanced statistical methods and has shown definitively that loosening public gun-carrying restrictions has led to an increase in violent crime across the nation.

Donohue has been a staunch critic of Lott since the late 1990s, when the latter released a controversial paper, "Crime, Deterrence, and Right-to-Carry Concealed Handguns," sparking a national debate on gun policy by concluding that crime is strongly deterred when more law-abiding citizens carry guns.

Lott and Moody acknowledged in a May 2021 report that new research over the past decade seems to indicate that loosening gun-carrying laws results in an increase in violent crime. But they maintain that the net effect of looser gun-carry laws is crime deterrence.

A "Calculated Effort" to Stifle Research

Meanwhile, the RAND Corporation, a government-funded think tank, evaluated earlier studies by Lott, Moody, Donohue, and dozens of other researchers and, in April 2020, concluded that "shall-issue concealed-carry laws may increase violent crime," but that the evidence was "limited."

Charles Manski, an expert in statistical analysis at Northwestern University, once offered an explanation for why gun policy research can come up with divergent findings despite analyzing similar (and sometimes nearly identical) data sets.

"Data cannot reveal counterfactual outcomes. That is, data cannot reveal what the crime rate in a [right-to-carry] state would have been if the state had not enacted the law," Manski wrote in a 2015 working paper. "To estimate the law’s effect, one must somehow 'fill in' the missing counterfactual observations. This requires making assumptions that cannot be tested empirically."

In Manski's view, gun policy researchers need to better acknowledge the limits of their statistical models and recognize that loosening gun permit restrictions may have varying impacts from state to state and from one crime category to another.

A governmental disinclination to consult or underwrite in-depth research has made it all the more difficult for the public to find conclusive data on gun policy.

"The gun lobby tried to follow the model of the tobacco industry directly by trying to get Congress to stop funding research into the gun area."

The authors of a peer-reviewed study published three years ago in the Journal of General Internal Medicine examined a wide range of gun-control laws and their effect on crime rates and found that implementing state-level "shall-issue" laws was associated with a 9 percent increase in homicide rates. Further loosening of regulations by implementing permitless carry did not significantly increase homicide rates, the authors found.

The debate over whether to adopt constitutional carry in Florida is taking place against a broader backdrop of major changes in federal gun regulations.

On June 23, the U.S. Supreme Court ruled that state restrictions in New York infringed on citizens' rights under the Second and Fourteenth amendments. That landmark decision is likely to compel other states with "may-issue" permit laws to retool their statutes to comply with the new precedent, though Florida, already a "shall-issue" state, won't be affected.

Two days after the Supreme Court ruling, President Biden signed a bill that some media outlets have described as the most significant federal gun law reform since 1994. The Bipartisan Safer Communities Act of 2022 expands a ban on gun purchases by domestic abusers, changes the background-check process on gun purchasers aged 18 to 21 to include juvenile records, and provides federal funding for so-called red flag laws that establish a special court process to block dangerous individuals from possessing firearms.

Still, Prevent Gun Violence Florida's Patricia Brigham says she fully expects DeSantis to get his way during the next legislative session, and that the Florida legislature will pass a law removing permit requirements for carrying guns in public in the Sunshine State.

"Unfortunately, the political landscape is much more hostile now to any sort of preventing of bad gun bills going through because we have a different type of Republican Party than we once did," says Brigham, who served as president of the League of Women Voters of Florida from 2018 to 2021.
KEEP MIAMI NEW TIMES FREE... Since we started Miami New Times, it has been defined as the free, independent voice of Miami, and we'd like to keep it that way. With local media under siege, it's more important than ever for us to rally support behind funding our local journalism. You can help by participating in our "I Support" program, allowing us to keep offering readers access to our incisive coverage of local news, food and culture with no paywalls.
Make a one-time donation today for as little as $1.
Izzy Kapnick is a freelance writer for Miami New Times, covering environmental law, white-collar crime, and the healthcare industry. He has worked as a legal news reporter in South Florida since 2008.
Contact: Izzy Kapnick