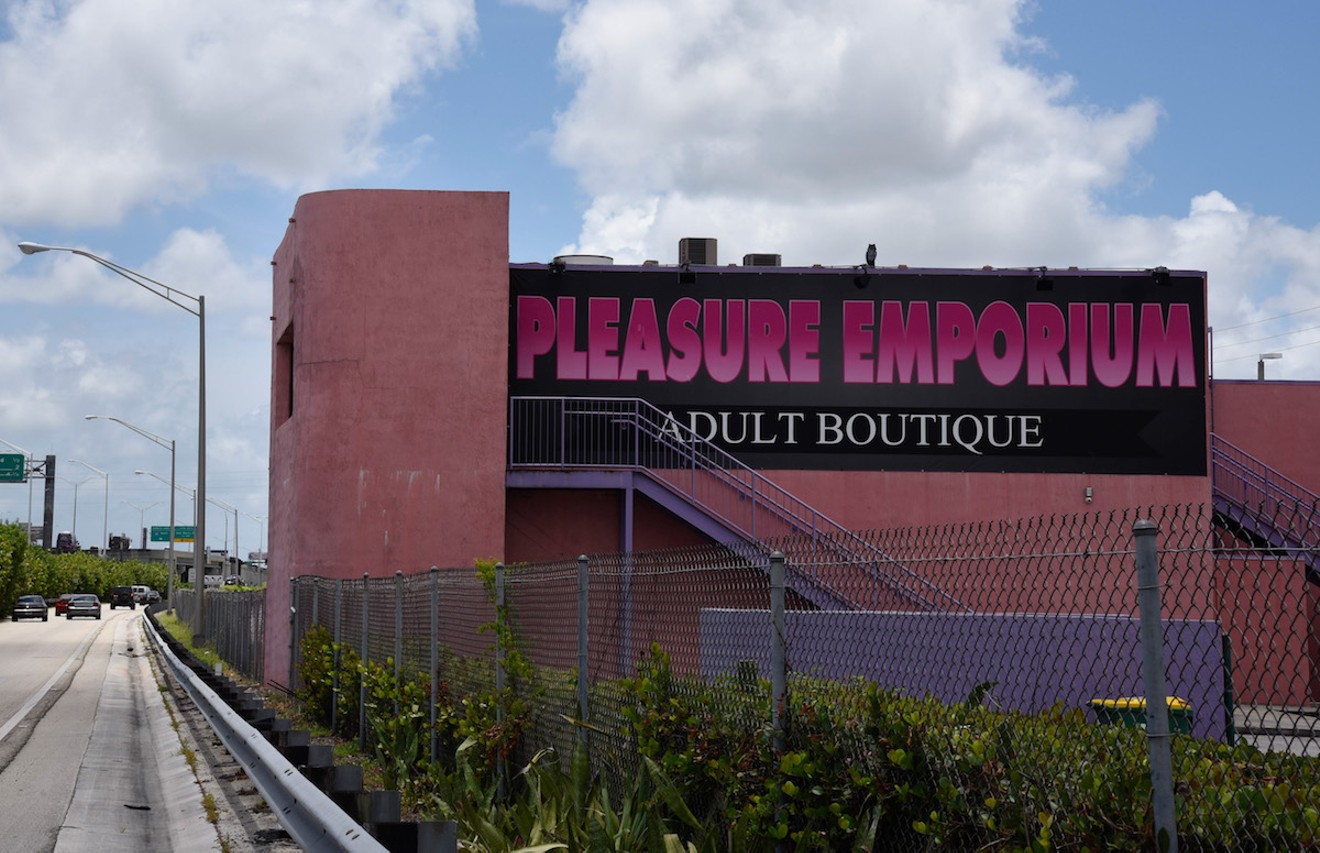 Sure enough, the pointless raid and atrocious media coverage have already wrecked one man's life. Abbie Cuellar, a lawyer for one of the 13 men, told New Times her client has already been fired from his job in the medical field after his arrest at Pleasure Emporium.

Even worse, her client fled Cuba 20 years ago after being persecuted there for being gay. Since moving to the States, he had not come out to his co-workers. Cueller said the arrest — and the local media's lurid coverage — outed her client and has pushed him into depression. New Times is not naming Cuellar's client because of the harm the arrest has already done.

"He was persecuted in Cuba because of his sexuality," Cuellar says. "He was thrown out of his home and thrown out of school because he was gay. He fled as a result and thought America was going to be this beacon of 'freedom.' He now basically has lost everything he has worked for... He is horribly suicidal."

Hollywood PD has made a habit of raiding Pleasure Emporium. In February, cops arrested six other men inside the store. Last week, after supposedly receiving complaints, Hollywood cops set up their so-called undercover sting.

After this story was initially published, Hollywood Police Spokesperson Miranda Grossman responded to an inquiry from New Times and reiterated that HPD felt the sting was worthwhile. She stuck by the police department's claims that the back rooms of the Pleasure Emporium count as an alleged "public place." She confirmed that the raid included four extra hours of overtime for the cops, which cost taxpayers an additional $240.

"It is the standard operating procedure for law enforcement agencies to release basic information contained in a police report to the general public," Grossman said via email. "As a I am sure you can understand releasing information related to criminal activity is in the public’s best interest."

But, as Cuellar notes, the men weren't hurting the public; they were all consenting to sex acts in private. Though she doesn't represent the other 12 men arrested, Cuellar says many were likely either closeted or even married with families.

"Clearly, this was a private setting within a private setting — you would have to pay to get into it," Cuellar explains. "It's not in a residential neighborhood. There's no danger a kid would ever walk past, even. The fact that they’ve been made out to be these sexual deviants, I feel like I’m back in the 1960s! I don't understand the point of this arrest other than smearing and humiliating these men."

As New Times noted last Friday, Hollywood Police received a handy assist from local media outlets, which immediately took of the so-called bust and ran with it like it was a five-alarm fire. TV stations, including WFOR and WPLG, published every arrestee's name and mug shot without regard for whether any of the men were publicly out as LGBTQ+ or whether their arrests helped the public in any way.

"I guess it must have been a really slow news night," Cuellar says. "They blasted out these pictures, their names, and they repeated this information over and over. I was like, What is going on? Were there minors involved? Drugs? Prostitution? None of that was involved!'"

The Miami Herald, at least, removed the arrestees' names and mug shots from its article after New Times reached out to the newspaper, but TV outlets have not been as responsible. WPLG still has both an article about the arrests and a slideshow of every mug shot online.

"Imagine: You're having sex with a consenting adult," Cuellar says, "and then you're arrested and held overnight, and your whole, entire life has been exposed on TV. Your picture is everywhere. You're on the internet! My client has even been getting calls from Cuba. This was horrible, horrible, horrible."
KEEP MIAMI NEW TIMES FREE... Since we started Miami New Times, it has been defined as the free, independent voice of Miami, and we'd like to keep it that way. With local media under siege, it's more important than ever for us to rally support behind funding our local journalism. You can help by participating in our "I Support" program, allowing us to keep offering readers access to our incisive coverage of local news, food and culture with no paywalls.
Make a one-time donation today for as little as $1.