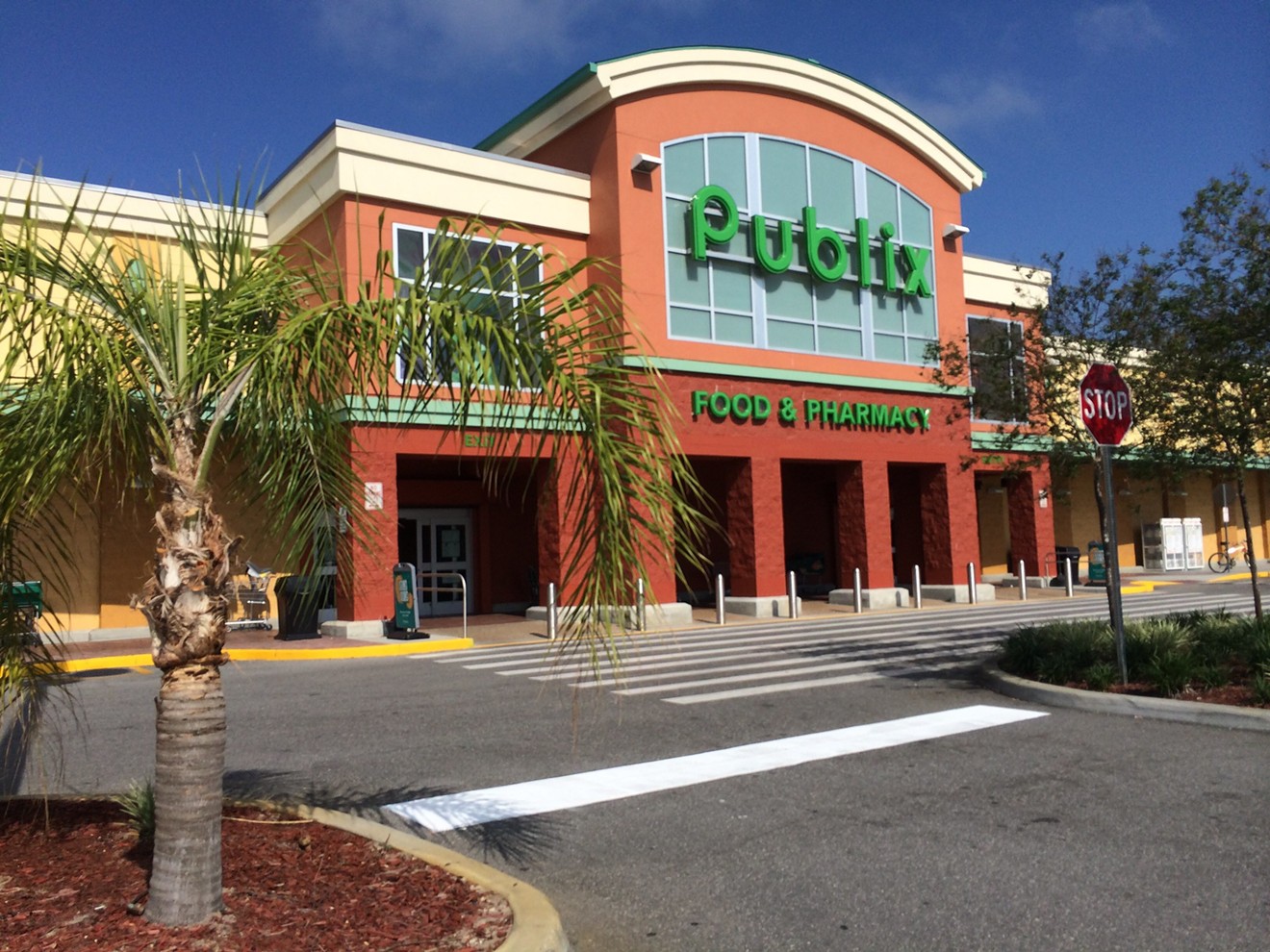 Publix Photo by Paulo O/Flickr
If a huge company like Best Buy or Walmart had a history of anti-LGBT accusations, fought Miami Beach's attempt to ban Styrofoam, had ties to someone donating hundreds of thousands of dollars against medical and battled a proposal to raise the minimum wage, protests would rage in the streets of Miami.

But despite having a hand in all of those things, Publix — Florida's most blindly beloved company — appears to be made of Teflon. The company remains one of the most respected brands in the Sunshine State despite a string of actions this year that should force consumers to pause before shopping there.

Publix is adored in Florida. The Lakeland-based chain is the state's most valuable homegrown brand (besting even Burger King) and is the most profitable chain of supermarkets in America, according to Forbes. The company is employee-owned (which means its workers get a cut of its stock shares) and pulls in more than $30 billion in revenue a year. Forbes regularly names Publix a "great place to work" for reasons that largely stem from its employee-ownership model and its nebulously defined workplace "culture."

Much of the love heaped on Publix comes from its own marketing campaigns. Floridians love repeating the store's slogan, "Where shopping is a pleasure," and defend the chain from criticism with the relative fervor of Sun Myung Moon devotees. When the satirical website Fark.com called Publix the "Walmart of the South" in 2015, Floridians swarmed the site with angry comments. The chain also leans on schmaltzy commercials around holidays such as Thanksgiving and Christmas that remind everyone that their grandmothers used to buy cakes and tomatoes at Publix on Christmas Eve.

In Florida, it's almost impossible to criticize the store without the members of your office/family dinner table/fantasy football league/competitive crocheting circle gasping in awe, crossing themselves, and dousing you in isopropyl alcohol. Yes, Publix supermarkets tend to be clean, well-lit, and mildly pleasant, but they in no way rival those of Trader Joe's, Whole Foods, or Wegmans in terms of store design or shopping experience. (Those stores tend to be more expensive and located in high-income neighborhoods, but that's an argument for another day.)

Publix's food is reasonably priced but not quite as cheap as a low-cost store such as Family Dollar. Publix is simply the boring, lukewarm center of the supermarket industry, but Floridians treat shopping there as if each store sells Fabergé eggs and Ecstasy pills as opposed to above-average subs.

And in placing Publix on a pedestal the store may or may not deserve, many Floridians continue to ignore the fact that behind the scenes, the company operates just like any other corporate giant.

For years, Publix has fought accusations of anti-LGBT discrimination. Human Rights Campaign, a national gay-rights organization, has said for years that Publix was the only Fortune 1000 company to decline to in the nonprofit's LGBT-workers-rights survey, and in 2013 gave the chain a zero rating for LGBT friendliness. That year, the gay-rights group Equality Florida told New Times it had received numerous complaints of LGBT discrimination at Publix.

In 2012, Broward County's Human Rights Board demanded that Publix a gay cake decorator $100,000 after the man said he was fired for his sexual orientation. The decision was later overturned, but other gay employees told New Times in 2014 they were denied benefits such as bereavement pay when their same-sex partners died, among other complaints. Compared to the company's competitors, Publix took a remarkably long time to offer marriage benefits to same-sex couples.

Farmworkers have also protested the grocery chain for exploiting workers in poor areas of Southwest Florida, and Greenpeace has ranked the supermarket as one of the least-sustainable places to buy fish in America.

But those issues never seem to come up in the numerous fawning profiles written about the company over the years.

Likewise, the chain, and people close to have made a series of bad-faith political decisions in the past year. Carol Jenkins Barnett, the daughter of Publix founder George Jenkins, donated $800,000 of her family's money to Florida, a political action committee that spread outright lies to try to scare people into voting down medical marijuana this year.

Though Publix said Barnett's donation had nothing to do with the company, critics said she was trying to defend the store's pharmacy business from competition, because doctors in legal-weed states tend to prescribe far fewer doses of painkillers and other prescription drugs. As opiate painkillers continue to stoke the nation's heroin crisis, Barnett spent Publix-earned money fighting to keep alternative medicine away from sick people.

The company also spent $1 million this year trying to persuade state lawmakers to stop local governments from banning polystyrene containers, which are harmful to the environment and ocean. A polystyrene ban in Miami Beach barely passed before the state law took effect — and Publix was one of the first businesses fined for breaking the city law.

Now a massive trade group with major ties to Publix is flexing its political muscle against another Miami Beach ordinance. Last week, the Florida Retail Coalition — whose five-member executive board includes a Publix representative — sued the City of Miami Beach to stop the barrier island from raising its minimum wage to $13.31 per hour. (The coalition is also suing the City of Coral Gables for trying to ban polystyrene too.)

For Publix, a company that prides itself on treating workers fairly, getting tied to that lawsuit is a remarkable black eye. Publix's entire "employee-owned," pseudo-pro-labor ethos seems fairly hollow when a trade organization it helps control is throwing legal temper tantrums because one city in Florida might force retail chains to pay their employees enough to pay their rent.

Tasty sub sandwiches can get you only so far.
KEEP MIAMI NEW TIMES FREE... Since we started Miami New Times, it has been defined as the free, independent voice of Miami, and we'd like to keep it that way. With local media under siege, it's more important than ever for us to rally support behind funding our local journalism. You can help by participating in our "I Support" program, allowing us to keep offering readers access to our incisive coverage of local news, food and culture with no paywalls.
Make a one-time donation today for as little as $1.