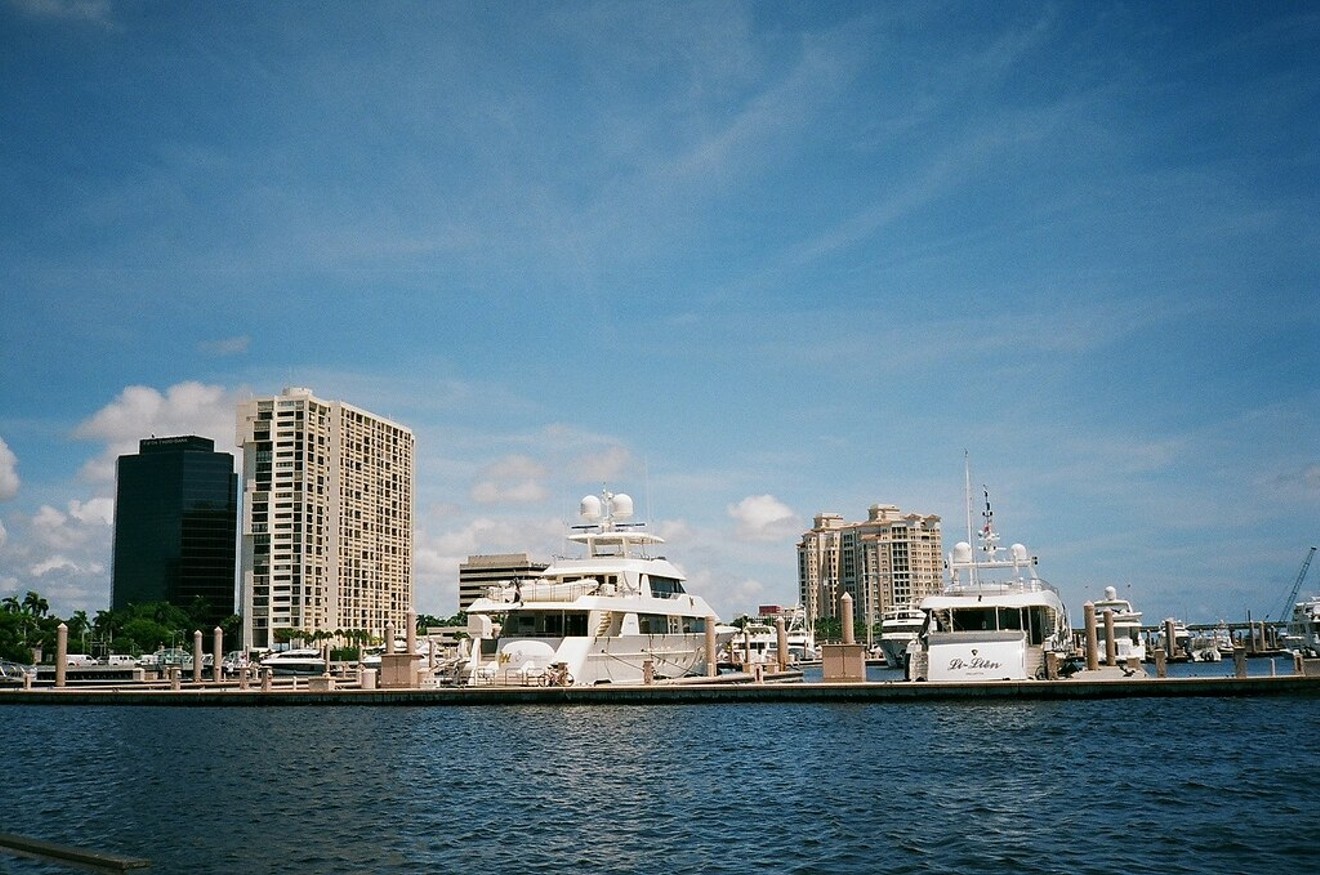 Former Venezuelan treasurer Alejandro Andrade's lavish lifestyle in Palm Beach included a fleet of luxury cars and a collection of designer watches. Phillip Pessar via Flickr
For just $11 million, a little piece of corrupt Venezuelan history was sold to the highest bidder last month, courtesy of the United States government.

May 30, an oceanfront home in Palm Beach forfeited by convicted money launderer and former national treasurer of Venezuela Alejandro Andrade was quietly auctioned off by Customs and Border Protection (CBP). The home was purchased by Matthew Womble, cofounder of the Connecticut-based investment management firm EverWatch Capital. A CBP spokesperson confirmed the details of the sale in an email to New Times.

The 4,600-square-foot estate is a five-bedroom, four-and-a-half-bath beach getaway complete with a spa and pool. Andrade bought the property, located at 1290 N. Ocean Blvd., for $8 million in 2013 and apparently let the place fall into disrepair. In 2016, neighbors complained that renovations of the home were disruptive and had been drawn out for too long.

The home — the latest of Andrade's illegitimate riches to be auctioned off — is markedly more luxurious than the ex-treasurer's current digs in federal prison. In November, Andrade received a maximum ten-year sentence in a West Palm Beach federal court after pleading guilty to accepting a stunning $1 billion in bribes as part of an illicit foreign currency scheme.

Andrade agreed in a plea deal to forfeit his Palm Beach home along with other estates in Wellington and Delray Beach valued at more than $5 million. He also handed over the contents of nine bank accounts and various other expensive items. In February, the Treasury Department took in more than $2 million from the auction of 17 show horses he imported from Europe for his son, an Olympian equestrian. Still left to auction are Andrade's fleet of luxury cars, including a Bentley and a Porsche, as well as more Rolex and Hublot watches than you could fit on five wrists.

Andrade's rise to power and infamy is inextricably tied to the political ascent of the late Venezuelan president Hugo Chávez. A military man of modest upbringing, Andrade took part in Chávez’s failed coup attempt against the Venezuelan government in 1992 and later became his bodyguard during Chávez's presidential run in 1999. Andrade flourished under the auspices of Chavismo and Venezuela's socialist government. He won a position in the national assembly and was appointed national treasurer by Chávez in 2007 and remained there until 2011. Between 2008 and 2010, Andrade also served as president of the country’s state-run bank, the Economic and Social Development Bank of Venezuela.

Andrade reportedly used his government positions to sell U.S. dollars on the cheap to an elite group of enchufados — plugged-in businessmen and public officials who took the foreign currency and sold it for up to ten times as much on the Venezuelan black market. For holding up his half of this Faustian bargain, Andrade received a cut of the proceeds in addition to extravagant bribes. According to court records, he continued the scheme even after Chávez's death in 2013, as Venezuela's economy began to crumble and shortages of staple foods in the country became chronic.

Among this group of enchufados was Caracas businessman Raúl Gorrín, who was indicted in the United States last November on charges of bribery and money laundering. Prosecutors say Gorrín greased the wheels for more than $150 million in bribes to treasury officials in Venezuela, including Andrade. In return, Gorrín, who owns the Venezuelan TV-news network Globovisión, gifted Andrade multiple jets and a yacht. Andrade ultimately flipped on Gorrín by offering investigators details about the scheme in exchange for a shorter sentence.

In the indictment against Gorrín, prosecutors demanded the forfeiture of more than two dozen properties he's been linked to in Florida and New York. In recent years, Venezuela has been the largest source of foreign money pouring into Miami real estate, outpacing countries such as China and Russia.

Schemes similar to the one by Gorrín and Andrade remain rife in Venezuela. But the real victims, the Venezuelan people, shouldn’t expect to see a penny of the auction proceeds for the time being: The U.S. Treasury says it will hold on to all funds seized from Venezuelan officials and their enchufados. Last month, the Senate Committee on Foreign Relations approved a bill that would assess whether the United States should put the seized assets into a managed fund, where it would sit until it could be returned to a future democratic government in Venezuela. The full Senate has not yet voted on the measure.

Andrade began his prison sentence in February. He is reportedly being kept in a low-to-medium-security facility in Loretto, Pennsylvania, about 80 miles from Pittsburgh.
KEEP MIAMI NEW TIMES FREE... Since we started Miami New Times, it has been defined as the free, independent voice of Miami, and we'd like to keep it that way. With local media under siege, it's more important than ever for us to rally support behind funding our local journalism. You can help by participating in our "I Support" program, allowing us to keep offering readers access to our incisive coverage of local news, food and culture with no paywalls.
Make a one-time donation today for as little as $1.