Before He Died of COVID, Publix Worker Gerardo Gutierrez Feared the Virus 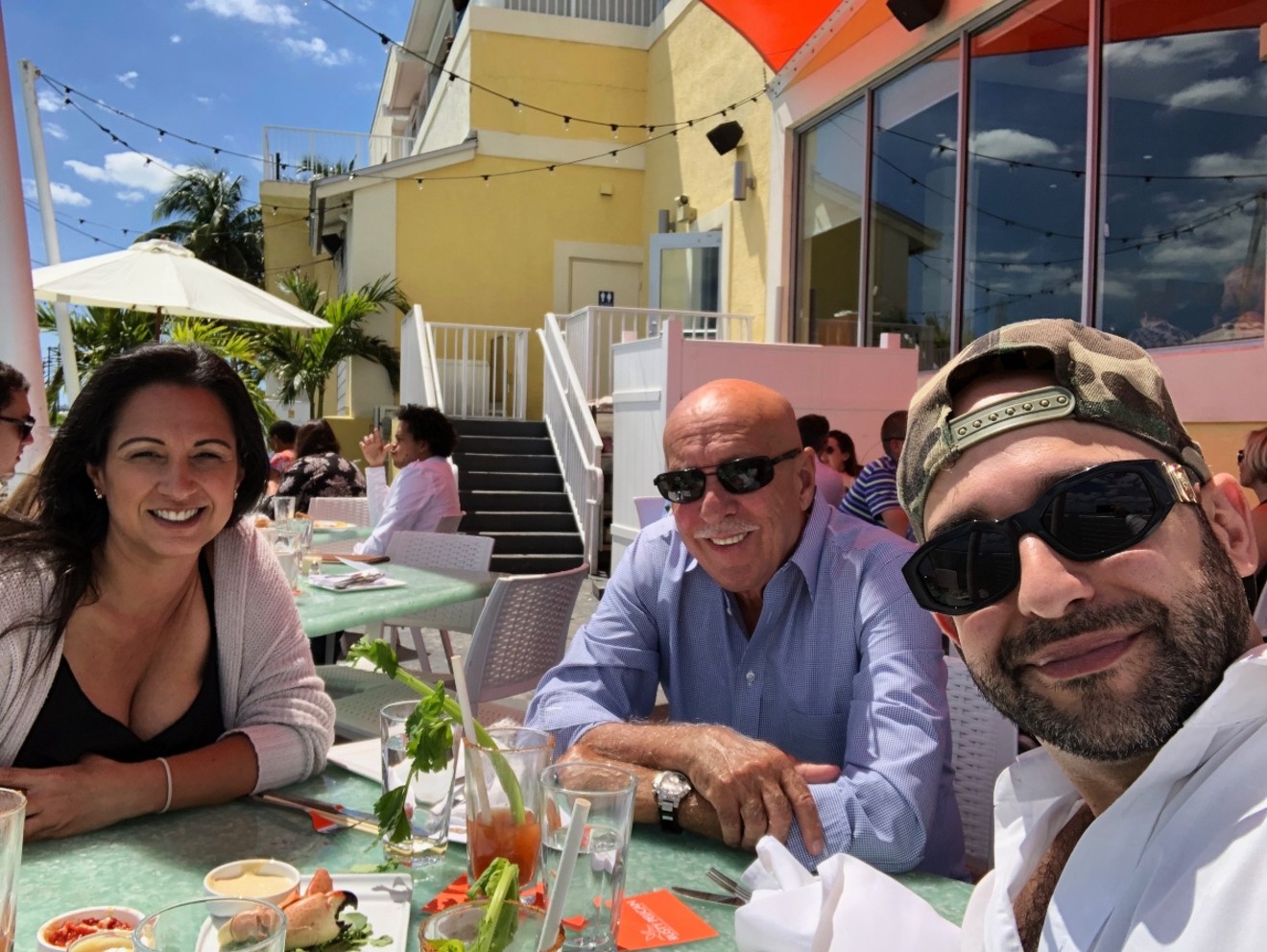 Gerardo Gutierrez (center) with his children Ariane (left) and Rene (right). Photo courtesy of the Gutierrez family
Gerardo Gutierrez was usually the first to arrive to Thanksgiving dinner, carrying bottles of wine and ready to help his eldest daughter, Ariane, with whatever she was cooking in the kitchen.

"He was my go-to guy. If I forgot something, he would go get it," she says.

But he was like that year-round, too. A good listener, the kind of dad you could go to as a kid when you got in trouble. Someone who always seemed to sense when he was needed.

"He worried about everyone else before himself," Ariane says. "He knew something was on your mind without anything being said."

Gutierrez's four children were equally in tune with him. In late March when the coronavirus began popping up in Florida, they called their dad to check up on him, asking about his job at a Publix deli, making sure he had everything he needed at home in Miami Beach. They wanted to know that, at age 70, he wasn't making unnecessary trips to the store.

"I know he was scared. He was extremely nervous, and he [lived] by himself," says 43-year-old Ariane.

"He would kind of brush me off and say he had to go," Jerry says. "I think he knew he was sick at that point and didn't want to tell me."

Gutierrez died April 28 in a Miami-Dade hospital after contracting COVID-19. His death came just weeks after one of his Publix coworkers became infected with the virus. Both were forced to work unmasked at a time when federal and state authorities had already declared the disease a public health emergency.

This month, Gutierrez's children filed a wrongful death lawsuit against the Lakeland-based grocery chain. Gutierrez had worked at the Sunset Harbour location in Miami Beach since 2015. The suit claims that management threatened to discipline employees who wore masks to work in the early days of the pandemic.

On April 2, after Publix learned one of its employees had tested positive, managers sent Gutierrez home to self-quarantine.

"This was inevitable, and Publix knew it," says Michael Levine, an attorney for the family. "And instead, they decided that wearing masks might scare off customers. The fact that they would choose profits over their employees is shameful."

Publix did not respond to an email from New Times seeking comment on the lawsuit.

By late March, the Occupational Safety and Health Administration (OSHA) notified Publix that a handful of employees at Florida locations had filed complaints about the mask rules.

By April, while other major retailers and grocers had implemented mask mandates for employees, Publix still had not. The company would wait until April 20 to put a mask requirement into effect.

According to the new lawsuit, a senior manager for Publix acknowledged in an April 3 email that stores had previously prohibited associates from wearing gloves and masks. The email said Publix would start to allow workers to wear PPE if they felt more comfortable doing so.

The email was sent one day after Gutierrez was sent home to self-quarantine.

The suit lists each of Gutierrez's four children as plaintiffs and says they're seeking damages for "the value of lost parental companionship, instruction and guidance, and mental pain and suffering from the date of his death," estimating the damages are well in excess of $30,000.

It doesn't list damages for the trip Jerry had planned to see his dad this summer. It doesn't list the days Gutierrez will miss at the beach, lying back in a chair for hours, tanning to a crisp. Or the chess games he might have played with his younger son, Rene. The Yankees games he'd recount with Jerry. The get-togethers with old friends, when they'd tell the same childhood anecdotes over and over. It doesn't mention Thanksgiving or Christmas or birthdays.

"This is not going to be a happy holiday for us," Ariane says. 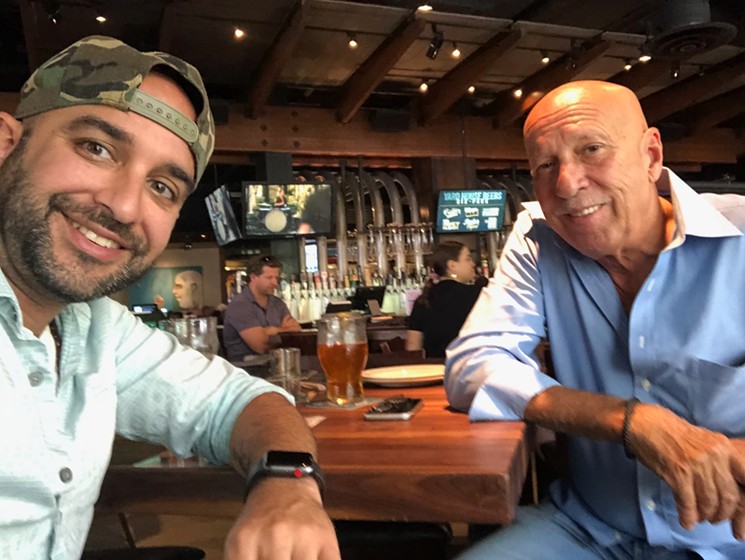 Rene Gutierrez and his father, Gerardo
Photo courtesy of the Gutierrez family
Born in Cuba, Gutierrez moved to the United States at age 9, living briefly in Jacksonville before settling in New York with his family. He went on to run a bodega in Washington Heights with his now ex-wife before moving back to Florida with his new partner. He sold cars in Tampa and had another daughter, Jerryana.

"He treated everyone with love," she says.

Gutierrez remained a stalwart Yankees fan in Florida and a loyal friend who kept in touch with a whole cast of characters back in New York: Vega, Flaco, Gino and Rosemary, Tony and Monica. He called regularly, and when the gang got together, they all called him Gucci — short for Gutierrez — a childhood nickname.

"Our friends used to want to hang out with him and his friends," Ariane says. "They were so funny."

Jerry says slicing meats and cheeses at Publix was just another job for Gutierrez, who had worked most of his life. He had not discussed retirement plans with his kids.

"He was still young. He was healthy," says 36-year-old Rene.

Rene says his father was his best friend. The two spent every one of Rene's birthdays together. Growing up, Gutierrez would sit and play PAC-MAN with Rene for hours after coming home from work. Gutierrez usually lost.

Gutierrez taught Rene the importance of self confidence. He showed his son how to act like a gentleman and demonstrated the ingredients necessary for looking sharp: collared shirt, nice watch, easy smile.

"When he came into a room, he had this aura about him," Rene says. "You knew he was a guy you could respect."

On April 28, the hospital called to tell the Gutierrez children it was time.

Rene made a desperate attempt to be with his dad. He went to the hospital, fell to his knees, and begged the staff to allow him to come inside the building and be with his father as he died. When he was eventually turned away, Rene went to his sister's home in Miami Beach, and they dialed into a Zoom video chat the nurse arranged in Gutierrez's hospital bed, where he lay unresponsive.

All of the children watched as their father took his final breaths. About 30 others — friends from New York and Tampa and Miami — popped into the chat, paying final respects. Overwhelmed by the outpouring, even the nurse operating the livestream wept.

"She said she thought that he heard us all," Ariane says.