DeSantis Already Compared Gillum to a Monkey on Fox News 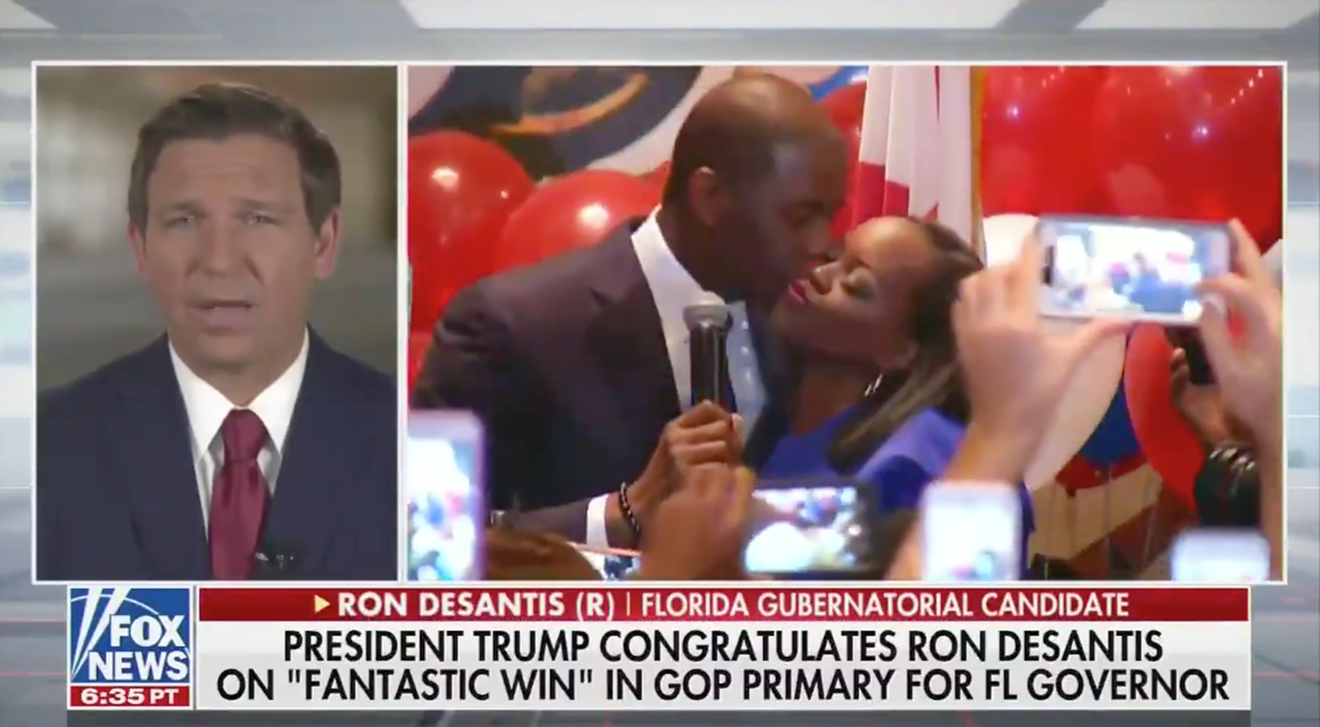 After calling Gillum "too liberal" to run Florida, DeSantis added that Gillum was an "articulate spokesperson for those far-left views." He then added seconds later that "the last thing we need to do is this up by trying to embrace a socialist agenda with huge tax increases and bankrupt the state."


The new Republican nominee for governor in Florida, Ron DeSantis, said that a win for his Democratic rival — the state’s first black gubernatorial nominee from a major party — would “monkey this up.” pic.twitter.com/mHksDVaHMX

Some reporters have already tried to give DeSantis the benefit of the doubt here and claim it was just a slip of the tongue, but in light of his primary campaign, he doesn't deserve that free pass. His entire campaign so far has been about genuflecting to Trump and bashing immigrants. One of his biggest campaign ads included him teaching his son about "building the wall" even though Florida doesn't share a land border with Mexico or any other nation.

Worse, DeSantis earlier this year also defended an attendee at one of his rallies who shouted that the nominee should "bring back the hanging tree" in Florida and noted he had "a tree and a rope in [his] backyard" for Joseph P. Smith, a man accused of raping and killing an 11-year-old girl before his conviction was overturned. Smith is white, but the "hanging tree" in America has long referred to lynchings of black Americans. Rather than condemn the remark from one of his supporters, DeSantis instead stood up for the man.

"Ron thinks that Floridians should be forgiven for having some pretty strong and not at all politically correct feelings about what should happen to this animal," a DeSantis spokesperson told the Tampa Bay Times.

DeSantis in 2018 also referred to New York candidate Alexandria Ocasio-Cortez, a Puerto Rican woman, as a "girl" or "whatever she is," in a many deemed sexist and racist.

“Ron DeSantis was obviously talking about Florida not making the wrong decision to embrace” Andrew Gillum’s policies, and “to characterize it as anything else is absurd,” DeSantis’ spokesperson says of his comments on Fox News this morning.


In the meantime, the Republican Governors Association has already begun sending out misleading attack ads labeling Gillum "too radical for Florida." The latest RGA email states the Medicare-for-all proposal that Gillum supports would cost American taxpayers $32 trillion but does not mention that Americans will pay more than that amount to private insurance companies in that same time period, for example. Expect more attacks on Gillum to fall into the race-baiting or wholly misleading category.

“On the first day of the general election, Ron DeSantis showed Floridians who he really is,” David Turner, deputy communications director for the Democratic Governors Association, said in a statement. “Resorting to dog whistle politics within hours of winning the GOP nomination shows a desperate candidate who will stoop to new lows in order to court and give voice to fringe elements of society. Floridians want a leader who will bring them together; Ron DeSantis has shown that he would only divide Florida.”

"It's disgusting that Ron DeSantis is launching his general election campaign with racist dog whistles," she said.

Fox News's Sandra Smith has since stated that her network will have Gillum on TV with Shephard Smith at 3 p.m. and that Fox "does not condone" DeSantis's language, even though the nation's preeminent white-supremacist media network absolutely, clearly does.

Greg Gutfeld says "it's not racial" and blames "the lynch mob" for making it racial pic.twitter.com/URSSXdZsqD