Thousands of Boats Wrecked by Irma Could Pollute Florida's Ecosystems

Photo by David Weydert/Courtesy of U.S. Coast Guard
Nearly three months ago, Hurricane Irma destroyed thousands of boats in marinas as it spun through the Sunshine State. Workers have spent weeks towing the vessels to shore and clearing out the debris, but hundreds of boats remain smashed and sunken in coastal waterways. And now marine scientists warn that the decaying wreckage could harm delicate local ecosystems.

"Many of these vessels are located in shallow seagrass and mangrove habitats and on sensitive bird and sea turtle nesting beaches, which has the potential to cause ongoing physical impacts to those ecosystems," says  Gena Parsons, a spokesperson for the Florida Keys National Marine Sanctuary.

Florida is home to a staggering number of personal boats — 931,450 were registered in the state in 2016, which accounts for 8 percent of the nation's boats. Of those vessels, 29,106 were registered in Monroe County alone, where many Keys residents live full time on the water.

Irma hit the middle Keys hardest before swinging north over the coast of Southwest Florida, where winds and storm surge displaced at least 2,600 vessels, leaving thousands of boat dwellers homeless. 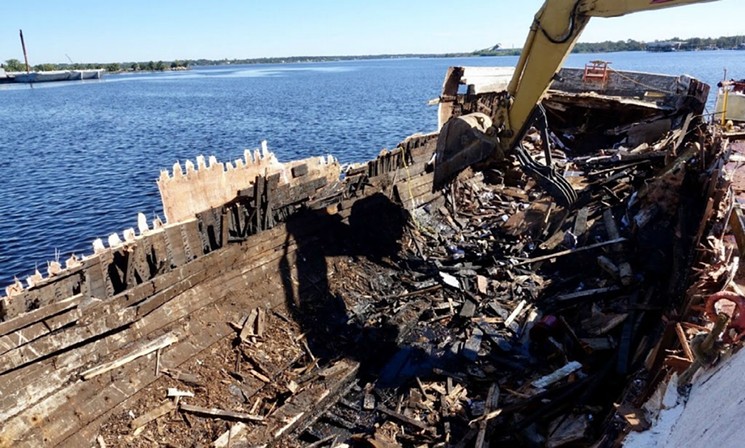 An Oil Spill Response Organization uses an excavator to demolish a fishing vessel.
Photo by Michael Himes/Courtesy of U.S. Coast Guard
Many of those vessels were left in splinters or set adrift by Irma's winds, and owners have had a hard time recovering their displaced boats in the months since the disaster. The Florida Fish and Wildlife Conservation Commission (FWC) has asked vessel owners to hire professional salvage companies in order to ensure a safe and environmental recovery, but removal is expensive. Towing can cost up to $300 per hour, while recovering a flipped or sunken vessel can cost up to $250 per foot, says Mike Hutchings, owner of Tow Boat U.S. in Key Largo. Many boat owners — already devastated by the storm — can't afford those costs.

In response, the federal government launched the Emergency Support Function 10 (ESF-10), in which multiple agencies, including the U.S. Coast Guard, the Environmental Protection Agency, and the FWC, work together to recover displaced vessels and respond to environmental threats such as leaking oil and fuel.

"Fuel, oils, batteries, and other hazardous materials onboard many of these vessels [can be] a threat to fish, wildlife, sensitive ecosystems, and a threat to public health... [so] safety and preservation of the environment are our top priorities while conducting vessel removal operations," Parsons says.

Those agencies are now providing owners with an alternative to footing the bill of boat removal by allowing them to relinquish ownership of the vessel, says Elizabeth Bordelon, a petty officer for the Coast Guard. Thus far, government agencies and private owners have successfully recovered and removed 1,988 vessels, including 160 in Miami and 1,434 in the Florida Keys.

Courtesy of Hurricane Irma ESF-10
Bordelon says responders have prioritized wrecked boats based on their potential harm to the environment.

"Vessels that are actively leaking are our top priority, and we are working with the vessel and property owners, using Florida state laws, to determine the best method to mitigate the impacts of Irma on a vessel-by-vessel basis," she says.

It's unclear exactly how many oil spills or fuel leaks have occurred since Irma, but the government is encouraging anyone who spots a problem to call the National Response Center at 800-424-8802. Government advisers have also been sent out to monitor removal operations in sensitive habitats or near endangered wildlife, Parsons says, to ensure they're taken care of safely.

Though Florida still has hundreds of wrecked boats to clean up after Irma, the Federal Emergency Management Agency has pledged $40 million toward the cleanup, Bordelon says. Crews have already finished towing vessels along the west coast of Florida and are now moving to the east coast and the Keys.