Photo by U.S. Marshals Service
The FBI has released its highly anticipated annual Crime in the Nation report to inform the public and policymakers about the current state of crime in the United States. But because of inadequate law enforcement participation, this year's data paints an incomplete picture of crime trends, especially in the Sunshine State.

The lack of hard crime stats from Florida and other states stems from their slow adaptation to changes in the feds' data collection system. On January 1, 2021, the FBI transitioned from using its Summary Reporting System to the National Incident-Based Reporting System, which collects information from specific crime incidents rather than from monthly aggregate totals.

"It's alarming because better data results in better policies," civil rights and criminal law attorney Melba Pearson tells New Times, referencing Florida's missing stats. "If we don't have good data, we're not going to make good policies because we're not fully informed as to the scope, breadth, and depth of whatever problem it is we're looking at."

The FBI's Uniform Crime Reporting Program has estimated crime statistics across the country since the 1960s thanks to data submissions from local law enforcement agencies. While the bureau estimates violent crime decreased by 1 percent and homicides rose more than 4 percent in 2021, the data is decidedly inconclusive, as only 11,794 of 18,806 law enforcement agencies across the nation participated in reporting. This is in addition to the fact that crime is already historically underreported.

Last year, in Florida, two of 757 police departments provided crime data to the FBI that could be used in the report — the Seminole and Miccosukee Tribal police departments. The FBI's own Crime Data Explorer website says these two agencies cover less than one percent of the state's population.

"The graph for Florida is useless because it's so woefully incomplete," says Pearson, who serves as director of prosecution projects at the Jack D. Gordon Institute for Public Policy at Florida International University. "It basically shows that crime is going down in Florida, as compared to the United States as a whole, but that doesn't reflect Miami-Dade County and the largest jurisdictions in the state."

Pearson questions why the majority of the state's police agencies did not submit federally compliant data, which she says they should be collecting internally. Claiming agencies owe the public an explanation for why they did not participate, Pearson urges local commissioners and residents to demand answers from their sheriffs, as "policing is a life-or-death field."

The Florida Department of Law Enforcement says that the time it takes to transition to the new, more detailed incident-based reporting system will vary by local agency and "is dependent upon many factors," including IT support and the software each agency uses.

"[The] transition time will vary and there may be time periods when data is not available for some agencies. This may result in incomplete or partial reporting for certain publication periods," the department said in March 2022.

The National Incident-Based Reporting System is more detailed in that it captures specific information about crime incidents, including date, time, and the relationship of the victim and offender. The system's crime categories are also more expansive than they were under the old format. 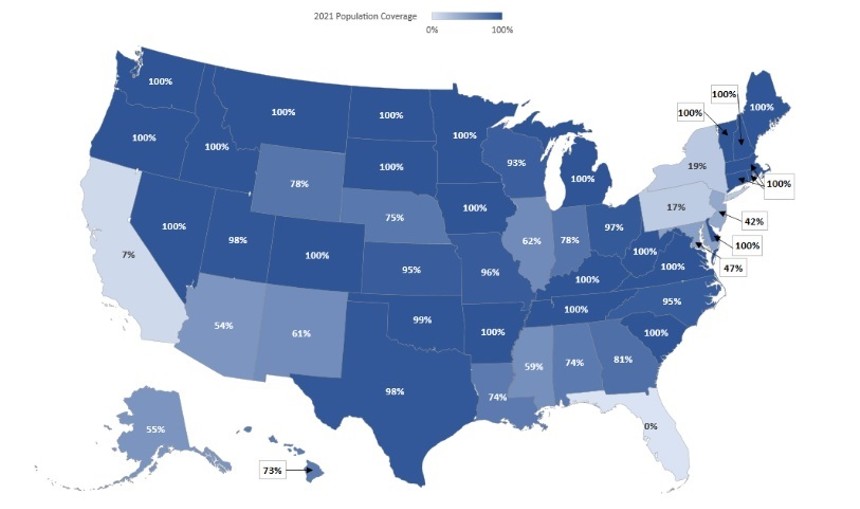 State-by-state participation in the new standard for national crime reporting, the National Incident-Based Reporting System, for 2021.
Graphic by Bureau of Justice Statistics
Since 2015, the federal government has awarded the Florida Department of Law Enforcement at least $17.6 million dollars to "develop a comprehensive plan to expand their current capacity" to report data to the National Incident-Based Reporting System (NIBRS), or to "plan how the state will create a state NIBRS program."

The Florida Department of Law Enforcement's Office of Criminal Justice Grants is responsible for giving the federal money to eligible law enforcement agencies around the state to assist in implementing the new data collection methods.

The state legislature's 2021-2022 fiscal year budget allocated $11.5 million to the Florida Department of Law Enforcement for the state-level reporting system. The department received $2.6 million a year before "to continue the transition" to the system and $10.2 million for the 2019-2020 fiscal year.

"What are the departments doing with their budgets?" Pearson asks. "Are they able to get the analysts they need to upload the information or is it a systems problem? The first push should be to make sure that every department has the ability to track these [statistics] because you can't tell me that the police departments across Florida don't know what crime looks like in their communities or have no data with regards to that."

Pearson calls the lack of participation among Florida's law enforcement agencies "problematic," given the lack of transparency and crime data playing a pivotal factor in midterm elections. Elected officials cannot properly address crime trends in the community if the data is not readily available.

"If you can't send it to the federal government, how are you communicating it to the people that are most impacted?" Pearson says. "It's just important for the communities to understand where their tax dollars are going."
KEEP MIAMI NEW TIMES FREE... Since we started Miami New Times, it has been defined as the free, independent voice of Miami, and we'd like to keep it that way. With local media under siege, it's more important than ever for us to rally support behind funding our local journalism. You can help by participating in our "I Support" program, allowing us to keep offering readers access to our incisive coverage of local news, food and culture with no paywalls.
Make a one-time donation today for as little as $1.