Everything We Know About the Sunrise FBI Shooting So Far UPDATED 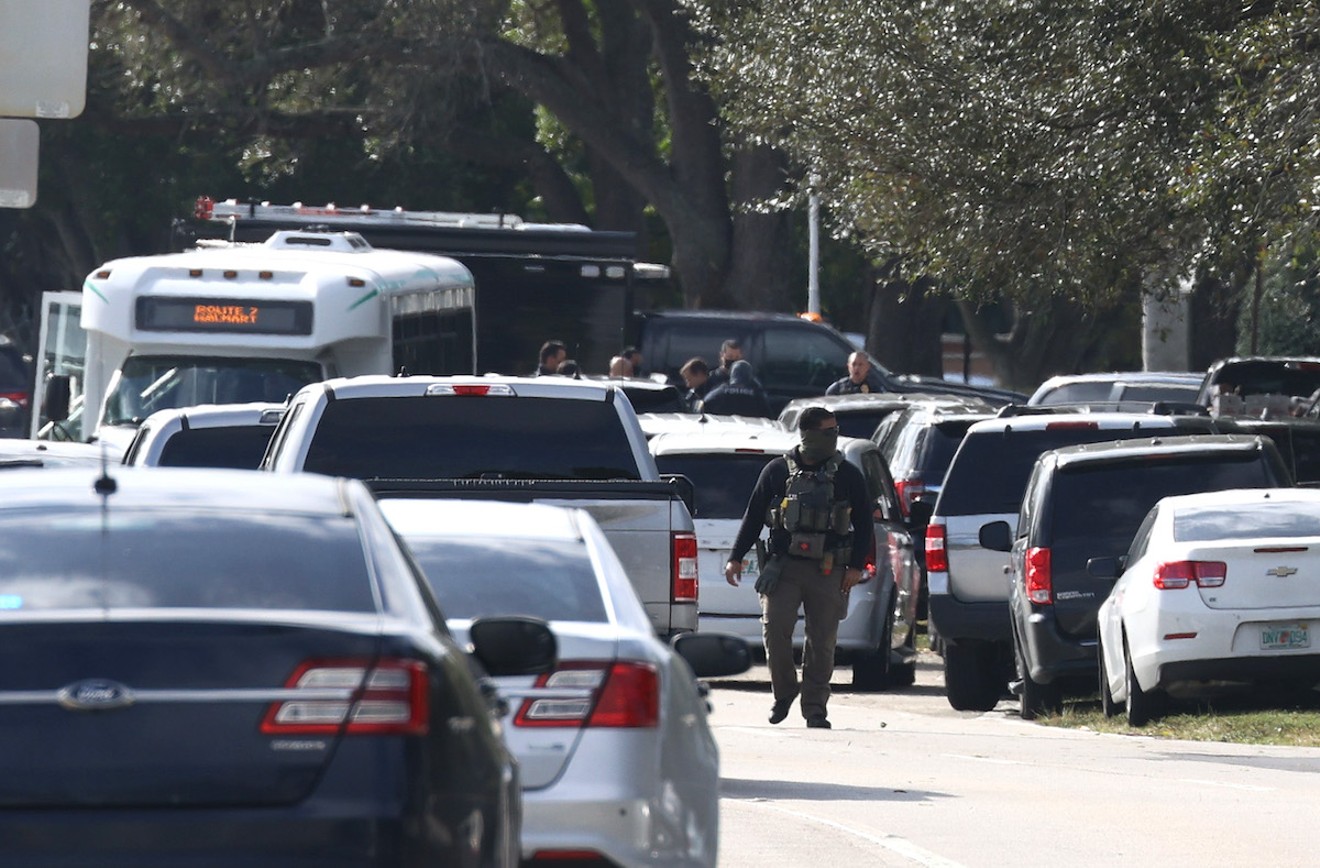 Law enforcement blocked off the area near a Sunrise apartment complex where two FBI agents were killed Tuesday. Photo by Joe Raedle/Getty Images
Update, 2:15 p.m.: The Miami Herald has identified the suspect as David Lee Huber. More details have been added to this story.

Before dawn on Tuesday, a group of FBI special agents gathered to serve a search warrant on the Sunrise apartment of a man suspected of possessing child pornography.

The suspect watched the agents through a doorbell camera, then ambushed them with gunfire, according to reports in the Miami Herald and Sun Sentinel. The man shot the agents through his unopened front door, killing two of them and injuring another three. He then barricaded himself in the apartment before killing himself.

Here's what we know so far about the shooting.

Who were the agents?

At a press conference outside the FBI Miami Field Office in Miramar, Special-Agent-in-Charge George Piro said Alfin, a New York native, was 36 years old and joined the bureau in 2009. He began in the FBI's Albany office and was assigned to the Miami office in 2017. Alfin is survived by his wife and child.

Schwartzenberger, born in Colorado, was 43 years old and joined the FBI in 2005. She worked out of the Albuquerque office before being reassigned to Miami in 2010. She is survived by her husband and two children.

"Dan and Laura left home this morning to carry out the mission they signed up for and loved to do — to keep the American people safe," Piro said during the media event. "They were valuable members of our team. They will forever be heroes. We will always honor their ultimate sacrifice."


LIVE: The FBI is giving an update on the Sunrise shooting that left two agents dead and three others injured. https://t.co/wFDfMHO2v2

Both special agents spent more than six years investigating crimes against children. The Sun Sentinel reports that Schwartzenberger was assigned to the Miami field office's Innocent Images National Initiatives, which investigates child pornography and sexual exploitation online. In 2015, she helped arrest a Miami man accused in a "sextortion" case. The man reportedly persuaded boys to send him explicit photos and videos of themselves and threatened to post the images on social media if they didn't send more. She was also the lead agent in the arrest of a North Miami Beach man who reportedly groomed a young girl from a young age, requested explicit photos and videos of her, and raped her, according to court records.

The Miami Herald reports that Alfin helped bring a case against Rene Pedrosa, the former City of Miami mayoral aide who was accused of groping a teenage boy at city hall and exchanging explicit photos. Alfin also investigated Playpen, a massive global child pornography site on the dark web. The site's creator, Naples-area resident Steven Chase, was sentenced to 30 years in prison in 2017 for running the site.

Who was the gunman?

The Miami Herald, citing anonymous law enforcement sources, identified the child pornography suspect and gunman as 55-year-old David Lee Huber. He appears to have no previous criminal record. A public records search shows he received traffic citations in Broward in 2001 and 2016. Huber had his own computer consulting business.

The FBI has not officially identified Huber. During Tuesday's press conference, Piro said the suspect would not be named until his family was notified of his death. The agency also hasn't released information about the child pornography case it was investigating.

How did this happen?

"The risk is elevated because that person's reputation in the community will be lost in an instant," Figliuzzi said. "And the reality of who they are, versus the persona they've put out to the public, comes to a crashing halt. That means you see incidences of suicide during the service of search warrants, and you see now violence against the law-enforcement agents."

The Miami Herald reports that police and federal agents conduct risk assessments before serving warrants, but those assessments may not guarantee their safety or provide all the information they need before going to someone's home. SWAT teams are sometimes on the scene when warrants are served, in order to provide additional protection, according to the Herald, but the group of FBI agents in Sunrise didn't have SWAT backup. It's unclear whether that would have helped, given that the gunman reportedly monitored the agents from his doorbell camera and fired at them through his front door.

When was the last time something like this happened?

Two FBI agents, Jerry Dove and Benjamin Grogan, were killed during the April 1986 "Miami Shootout," one of the most violent firefights in the agency's history. Dove, Grogan, and six other agents were staking out a pair of accused killers and bank robbers. The suspects led the agents on a high-speed chase and shot at them. Dove and Grogan were killed, five other agents were hurt, and one agent shot and killed the suspects.

In 2004, a Broward Sheriff's Office detective was shot and killed by a suspect in a child-pornography case.

And in 2011, two Miami-Dade police detectives were shot and killed while serving a warrant at the home of a Liberty City man accused of murder.
KEEP MIAMI NEW TIMES FREE... Since we started Miami New Times, it has been defined as the free, independent voice of Miami, and we'd like to keep it that way. With local media under siege, it's more important than ever for us to rally support behind funding our local journalism. You can help by participating in our "I Support" program, allowing us to keep offering readers access to our incisive coverage of local news, food and culture with no paywalls.
Make a one-time donation today for as little as $1.