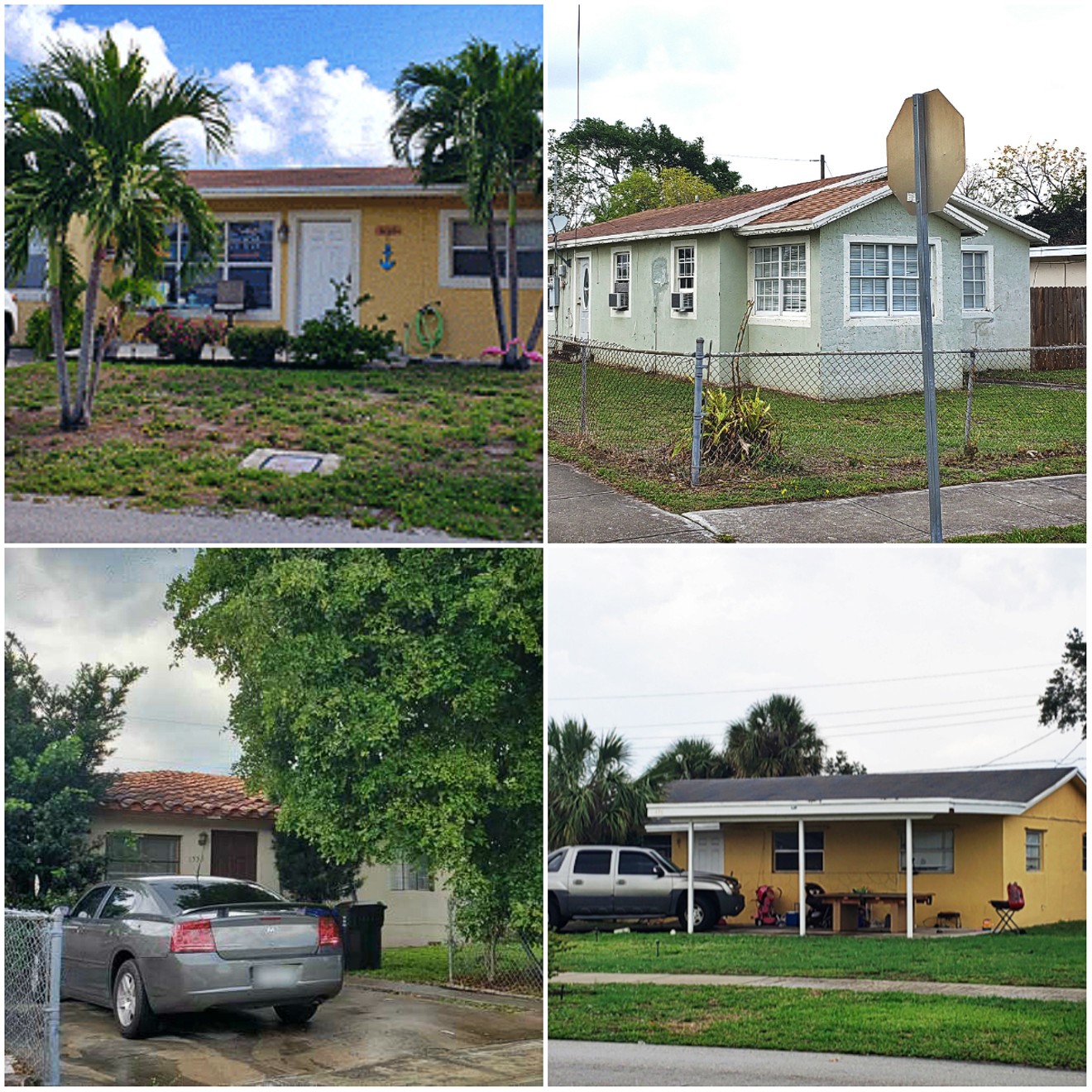 Four South Florida homes bought with dirty money (clockwise from top left): Pompano Beach, Hallandale Beach, North Miami Beach, and Deerfield Beach. Photos via U.S. Treasury
In 2017, James Merrill of Massachusetts was sentenced to six years in prison for his role in a massive pyramid scheme that fleeced roughly 1.8 million people out of more than $3 billion. Merrill and his partner, Carlos Wanzeler, made off like bandits with millions in illegitimate gains they dumped into 21 South Florida properties before federal prosecutors caught up with their company, TelexFree. This week, four of those houses, which were seized by the federal government in 2016, went up for auction.

Properties in Hallandale Beach, North Miami Beach, Pompano Beach, and Deerfield Beach were sold to the highest bidder yesterday at the Greater Fort Lauderdale/Broward County Convention Center. The U.S. Treasury Department, which auctioned the homes through CWS Asset Management & Sales, says it plans to use the proceeds from the sales to repay TelexFree victims.

TelexFree remains the largest pyramid scheme prosecuted by the federal government, eclipsing even Bernie Madoff's fraudulent business empire in the number of victims. In the case of TelexFree, the people cheated out of their savings were mostly immigrants from Brazil and the Dominican Republic living in the United States; a smaller number of victims were from dozens of other countries.

As with any pyramid scheme, TelexFree participants got most or all of their pay for recruiting members rather than selling an actual product or service. TelexFree claimed to sell a Skype-like internet phone service for calls to Latin America. But instead of actually selling the product, the company's investors, known as "promoters," used their own money to buy and place ads for the service online to recruit new promoters. TelexFree leaders used the lure of working from home and guaranteed income to hook desperate immigrants. Promoters were promised an eye-popping 200 percent annual return on their initial investment. For more than half of promoters, those returns never came.

Stories that begin with corrupt millionaire scammers getting their comeuppance usually end with mansions and beach getaways being seized by the feds — but not this one. Most of the homes purchased by shell companies run by Merrill and Wanzeler are relatively modest in comparison to the multimillion-dollar condos cherished by plutocrats looking to launder money in South Florida real estate.

The North Miami Beach property, located in the Washington Park neighborhood, is 1,016 square feet with three bedrooms and one bath. Merrill and Wanzeler purchased the home for $79,000 in 2013 in the name of a corporate entity they managed, CNW Realty State LLC. The home is now valued at more than $100,000.

In 2016, the Treasury Department subjected Miami-Dade County to greater transparency when it came to large-dollar real-estate transactions. Last year, the department's Financial Crimes Enforcement Network, known as FinCEN, lowered existing price thresholds — from $1 million to $300,000 — that require corporate entities to reveal their owners to title insurance companies handling the property sales. The lower requirements first went into effect in Miami-Dade and then were expanded to Broward and Palm Beach Counties.

None of the TelexFree homes up for auction this week would've triggered the new FinCEN disclosure requirement had it existed in 2013.

According to CWS Auctions, the winning bid amount and name of the buyer will be made public within 30 days of the date the government signs off on the offer.
KEEP MIAMI NEW TIMES FREE... Since we started Miami New Times, it has been defined as the free, independent voice of Miami, and we'd like to keep it that way. With local media under siege, it's more important than ever for us to rally support behind funding our local journalism. You can help by participating in our "I Support" program, allowing us to keep offering readers access to our incisive coverage of local news, food and culture with no paywalls.
Make a one-time donation today for as little as $1.