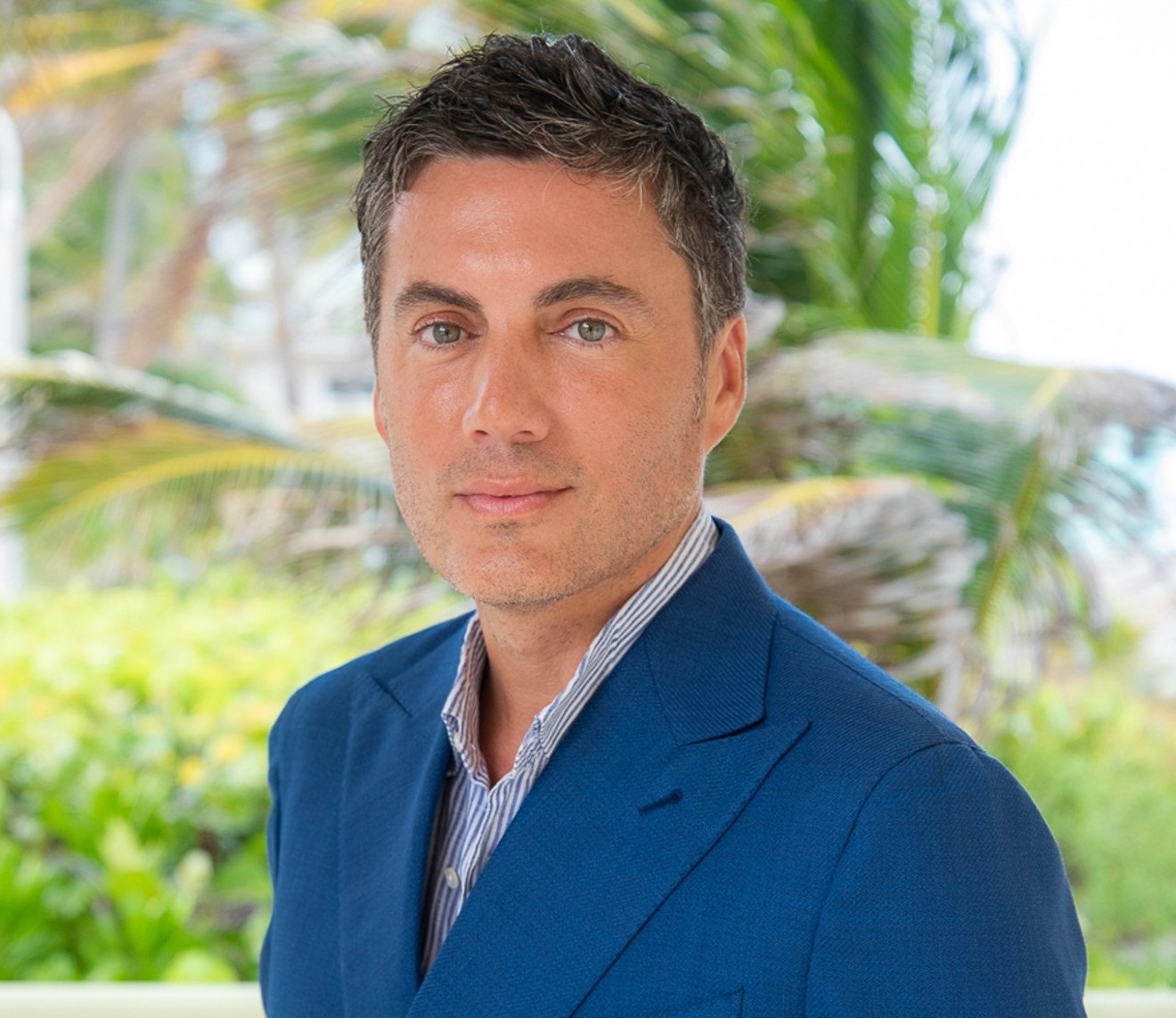 Fabian Basabe is throwing his hat into the ring for the 106th district race for the Florida House of Representatives. Photo by Scott Teitler
Fabián Basabe unabashedly funded his own way into a Florida House of Representatives race. The former reality TV star and onetime tabloid fixture says he was putting his money where his mouth is when he dropped $250,000 into his campaign.

"This is real money, and it's my money. You know, this is something [that] is an investment for me," Basabe tells New Times. "Aren't you more comfortable knowing that I am in a financial position to not be corrupted? I'm not starting in politics and ending up with a bigger house."

The socialite-turned-politician is running as a moderate Republican against Democrat Jordan Leonard, a former Bay Harbor Islands mayor and previous president of the Miami-Dade County League of Cities. The two are vying for a statehouse seat representing District 106, which covers barrier island communities from Miami Beach north to Sunny Isles.

The newly redrawn district encompasses heavily Democratic-leaning communities but has a large contingent of independent voters.

Basabe has pledged to support gay rights, fight for increased funding for law enforcement, improve infrastructure, and beautify Miami Beach. Local political endorsements have come in for him from across the political spectrum, including one from former Miami Beach Mayor Matti Bower, a Democrat.

"You literally have Democrats, full-on Democrats, that have crossed party lines in support of my campaign. They're gonna take some hits politically and they know it. And they're still willing to take a chance. That means so much to me and I'm not going to betray that opportunity," Basabe says.

As the November 8 election nears, however, Basabe faces a steep uphill climb. Even if the political neophyte can flip the left-leaning district — where Democrats cast nearly twice as many primary votes for the statehouse race as Republicans — scrutiny of his past has been mounting.

In recent weeks, Basabe has faced renewed criticism over instances of alleged volatile behavior in the not-too-distant past, including a 2019 incident in which a publicist accused him of calling her the N-word and a “whore” at Art Basel — and a more recent fracas that saw a dispute with a neighbor lead to Basabe being taken into custody by U.S. Marshals in South Carolina.

Basabe claims he's a victim of his own past celebrity, and that the unflattering reports are exaggerated. When speaking to New Times, he talks of unity and how beautiful it is to live in Miami Beach, and how we should stop being jerks to each other.

"People have become so cold and bitter and unforgiving. And that is so ungrateful considering we live in a paradise," Basabe says.

He knows he's had privileges, he says, and he knows he doesn't have to deal with what he calls "the mundane chores of everyday life."

"I have a greater responsibility. This is an opportunity... to show my appreciation for the life that I have," he says. 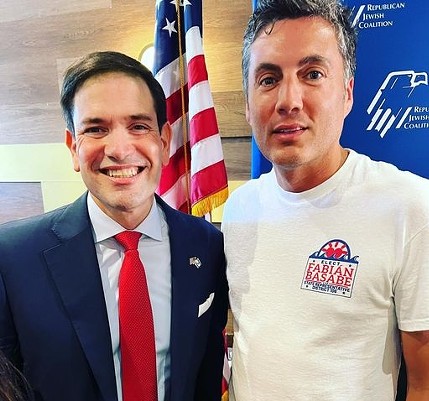 Back in the Public Eye

Basabe spent his youth in Miami Beach, where his parents owned the Boulevard and Breakwater hotels. He had a stint studying international relations at Pepperdine University in Malibu, California, before moving to New York City and becoming a "fixture on the social and nightlife scenes," as he describes it.

He made a name for himself on E! Entertainment's Young, Rich and Famous in 2003 and later appeared on the reality TV show Filthy Rich: Cattle Drive, which featured children born into wealthy families working on a ranch.

Basabe has tried hard to distance himself from his image as a temperamental child of wealth, which dominated past tabloid coverage of him. But his run for public office has stirred up debate over controversial incidents in which he's been involved over the past several years.

Among the stories that have come into focus in recent weeks: Basabe's run-in with U.S. Marshals in August 2020, when armed agents surrounded him on his boat in a marina near Charleston, South Carolina. The agents were acting on an outstanding warrant after Basabe allegedly failed to address a criminal charge arising from a Miami Beach incident in which he grabbed a neighbor's phone.

At the height of the pandemic, the neighbor confronted Basabe and accused him of not following COVID-related restrictions by hosting a gathering at their condo's pool area. As the neighbor recorded the situation on her smartphone, Basabe snatched the device and threw it into the bay, according to a police report. He offered to reimburse her, but she moved forward with pressing charges, police said.

Basabe says his gathering was authorized by the condo management and that the neighbor was harassing him and recorded videos of his family. "I did not want a video of my 11-year-old son in a bathing suit in any stranger’s hands," he says, adding, "I had no reason to believe a warrant for my arrest was issued."

The charge was reduced to a misdemeanor and Basabe paid a fine. He calls the situation a victory for his family. "No one ran. They waited till I was on vacation and pressed charges while I was out of town. The judge even allowed me to get back on my boat immediately," he wrote in a social media exchange with film maker Alfred Spellman, who has sharply criticized Basabe's candidacy last week.

And while the nightlife escapades that attracted notoriety in the New York City entertainment news sphere have faded into the past, Basabe has had his moments in Miami.

In 2016, Basabe, then in his late 30s, was hit with a misdemeanor disorderly conduct charge in Miami Beach after he climbed on the roof of a car and yelled at pedestrians as the vehicle tooled down Washington Avenue.

He told police he was "just being stupid" and wanted to "make a fabulous entrance to Club Twist," according to the police report.

Basabe says he's still active in the social scene and that being out and about and partying in the Magic City has its drawbacks.

"It's not like all of a sudden I'm 40 and I don't go outside anymore. I have an exciting life. And when you go out and enjoy life and celebrate life and people as much as I do, you tend to run into situations where you lend yourself to being a target because of who you are," Basabe says.

Basabe is also facing renewed scrutiny over claims that he used a racial slur in anger at an Art Basel event in 2019. A publicist told Page Six that after she tried to deny him entry to an art show, he called her a "whore" and the N-word.

"When he’s leaving, he starts screaming at the top of his lungs, 'peasant,' 'whore,' 'bitch' at me," the publicist, Tayo Otiti, said at the time.

Basabe denied using the slur. "This was an exaggerated incident in a gossip column," he tells New Times.

The 44-year-old Basabe's political background is sparser than his opponent's, he concedes. He spent much of his adult life sleeping in, imbibing, and enjoying "all the pleasures of life," he tells New Times.

But he says he has turned over a new leaf and is doing his "very best from sunrise to sunset" to engage with his community. In his own words, he's a family man and devotes his time to his wife, Martina Borgomanero Basabe, heiress to the La Perla lingerie fortune, and their teenage son.

Basabe vied for a Miami Beach City Commission seat last year but was disqualified when it came to light that he hadn't been a resident long enough to be eligible to run.

Nowadays, he can be found courting the electorate and meeting with local council members throughout District 106. In recent months, he has helped out with Favela Miami's homelessness relief programs, attended dozens of community events, and posed for photos alongside U.S. Sen. Marco Rubio.

On Memorial Day, Basabe attended Honor Our Heroes, a veteran-appreciation event in Daytona Beach. (His father, a businessman born in Ecuador, was deployed to Vietnam after moving to the United States, Basabe says.)

"I can honestly say, and I think most people that have gotten to know me would agree, especially those that understand what it is to run a campaign, that no candidate has worked harder than myself in this race," Basabe says.

Staying focused on policies and fostering a more civil political discourse seems to be his strategy, even as his personal history is dissected in the press and on social media. His campaign platform lists protecting beaches, keeping taxes low, and ending housing insecurity as priorities.

As the election approaches, the moderate voters he's courting might be weighing their opinions on his past controversies against their take on his diplomatic political stances.

"Are there are people that want to have their own fantasies about who I should be?" Basabe says. "I invite them to enjoy that. Is that really helping anybody?"

Adds the candidate: "It's really gross, the characters that you meet jumping into a political arena, the stuff that gets thrown at you, the exposure, the overexposure from people who have no other interest but to take you down. And in my younger years, I used to pay, you know, five figures to top publicists to try to keep my name out of the press."
KEEP MIAMI NEW TIMES FREE... Since we started Miami New Times, it has been defined as the free, independent voice of Miami, and we'd like to keep it that way. With local media under siege, it's more important than ever for us to rally support behind funding our local journalism. You can help by participating in our "I Support" program, allowing us to keep offering readers access to our incisive coverage of local news, food and culture with no paywalls.
Make a one-time donation today for as little as $1.