Finding safe, affordable housing in Miami was a big problem even before the pandemic and has only worsened since. Photo by Dan DeLuca/Flickr
In October 2020, six months into the COVID pandemic, the landlord of a Palmetto Bay apartment where then-high school senior Arianna had lived for more than a decade with her sister and parents, delivered shocking news: The family had a month to move out.

The two-bedroom apartment had a fixed rent that had allowed Arianna's family to live for the past 14 years in the relatively pricey South Miami-Dade municipality, close to where Arianna and her sister attended school.

While the U.S. Centers for Disease Control and Prevention had forbidden most evictions during the pandemic, Arianna's parents — as undocumented immigrants from Costa Rica — worried they could expose themselves to deportation if they tried to challenge the eviction in court.

New Times is withholding the family’s last name because they lack legal status.


Miami's housing-affordability crisis — one of the worst in the nation — only deepened amid the pandemic. Thousands lost their jobs or had hours or wages cut, while rents increased. For immigrant families, the crisis is particularly acute, especially for children, who often bear a heavy burden in trying to support their parents and navigate a system rife with language barriers and discrimination.

Arianna, then a senior at Miami Palmetto Senior High School, took on most of the responsibility for finding her family a safe, affordable home. Her mother and father speak little to no English, so Arianna had always been their translator, dealing with utility companies and even taking side jobs to help make ends meet.

With the clock ticking until their eviction, she spent school nights filling out college applications while also scouring the internet for listings of apartments they could afford and calling family friends who might know of cheap rentals that were available.

"I was drained. I was so drained," she says.

Finding safe, affordable housing in Miami was a big problem even before the pandemic and has only worsened since: The median sales price for a single-family home was $469,500 in January 2021 — up more than 25 percent from January 2020, according to the Miami Herald.

As housing costs in South Florida rise and wages remain stagnant, a growing number of families are becoming cost-burdened, meaning they spend more than 30 percent of their income on housing. For a family that makes $20,000 a year, for example, "affordable" rent or mortgage payments can't exceed $500 a month.

A "realistic, average" cost for a one-bedroom apartment in Miami-Dade County, meanwhile, is about $1,500 to $1,600, says Natalie Castellanos, director of policy and public affairs at the Health Foundation of South Florida.

Being cost-burdened often leaves families with little to spend on other necessities.

"When they're focusing most of their income on rent, they can't think about, 'Let me address my well-being, let me address my education, let me address making sure that I can pay for my car or have a car,'" says Audrey Aradanas, assistant director of programs at Miami Homes For All, a nonprofit working to end homelessness and improve housing affordability.


"Making trade-offs" between paying the rent and paying other expenses comes at the cost of long-term physical and mental health, Castellanos says.

As of 2020, 250,000 households in Miami-Dade County were considered cost-burdened, a figure that represents 84 percent of all households in the county, according to Miami Homes For All.

Immigrants encounter their own set of challenges. Facing an overpriced housing market and struggling to earn higher incomes, many are forced to accept whatever housing they can find.


Florida is home to some of the most expensive residential units in the U.S. but also some of the most impoverished and dilapidated. Many are missing the most basic necessities that a house or a room requires — essentially, rooms or efficiencies considered to be illegal housing.

The pandemic has made the situation worse.

Soon after the first cases of COVID were reported in the United States, immigrants saw a plunge of available jobs across the nation, and by April 2020, the number of immigrant workers in America had declined by 21 percent, according to data compiled by the Congressional Joint Economic Committee. For those workers, the unemployment rate skyrocketed from 2.6 percent to 16.5 percent. 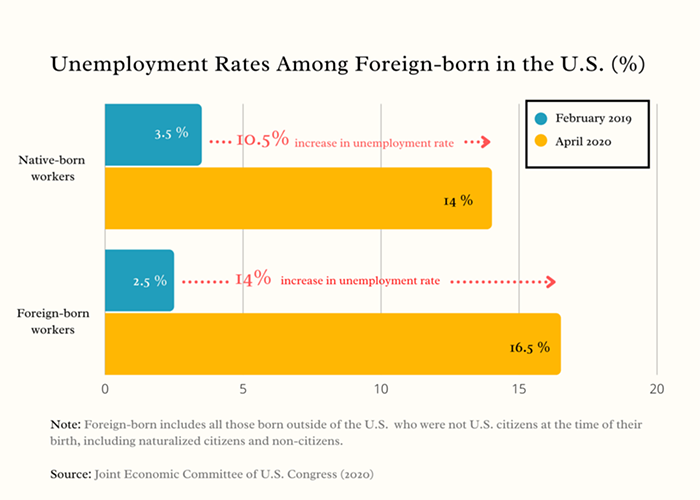 That rise was in part because of an influx of out-of-state residents who moved to Florida to escape cramped cities that became hot zones of COVID transmission. In Florida, they found larger homes and a climate that allowed for more outdoor activities.

Adding to the difficulties for immigrants is that many of them don't qualify for financial assistance from the government. Undocumented immigrants didn't qualify for the federal stimulus checks that millions received during the COVID outbreak or even for Florida's Supplemental Nutrition Assistance Program (SNAP), which helps struggling people pay for food.

Arianna, the teen whose family was evicted, knows all too well the impact of her parents' legal status. As undocumented immigrants, her parents didn't qualify for any of the government's streams of financial assistance that might have made it easier to find a new apartment.


Instead, they got lucky. When a friend offered Arianna and her family a three-bedroom home that was spacious and "close to everything," they knew they'd hit the jackpot.

Arianna was recently accepted to the University of Florida and started her studies in June. She plans to major in sociology.

When she left for Gainesville, though, she had to leave behind her parents and her younger sister. They'll have to fend for themselves, no longer able to rely on her to translate for them or guide them through the perils of living as undocumented immigrants.

She has no answers. "I don't know what's going to happen, honestly," she says.

Editor's note: Delgado, Hughes, Li, Pena-Agramonte, Perez, and Sanchez are high school students at Miami Lakes Educational Center and Coral Reef Senior High School in Miami. They were participants in Urban Health Media Project's workshop, Home Sick: How Where We Live Impacts Health, in spring of 2021.
KEEP MIAMI NEW TIMES FREE... Since we started Miami New Times, it has been defined as the free, independent voice of Miami, and we'd like to keep it that way. With local media under siege, it's more important than ever for us to rally support behind funding our local journalism. You can help by participating in our "I Support" program, allowing us to keep offering readers access to our incisive coverage of local news, food and culture with no paywalls.
Make a one-time donation today for as little as $1.