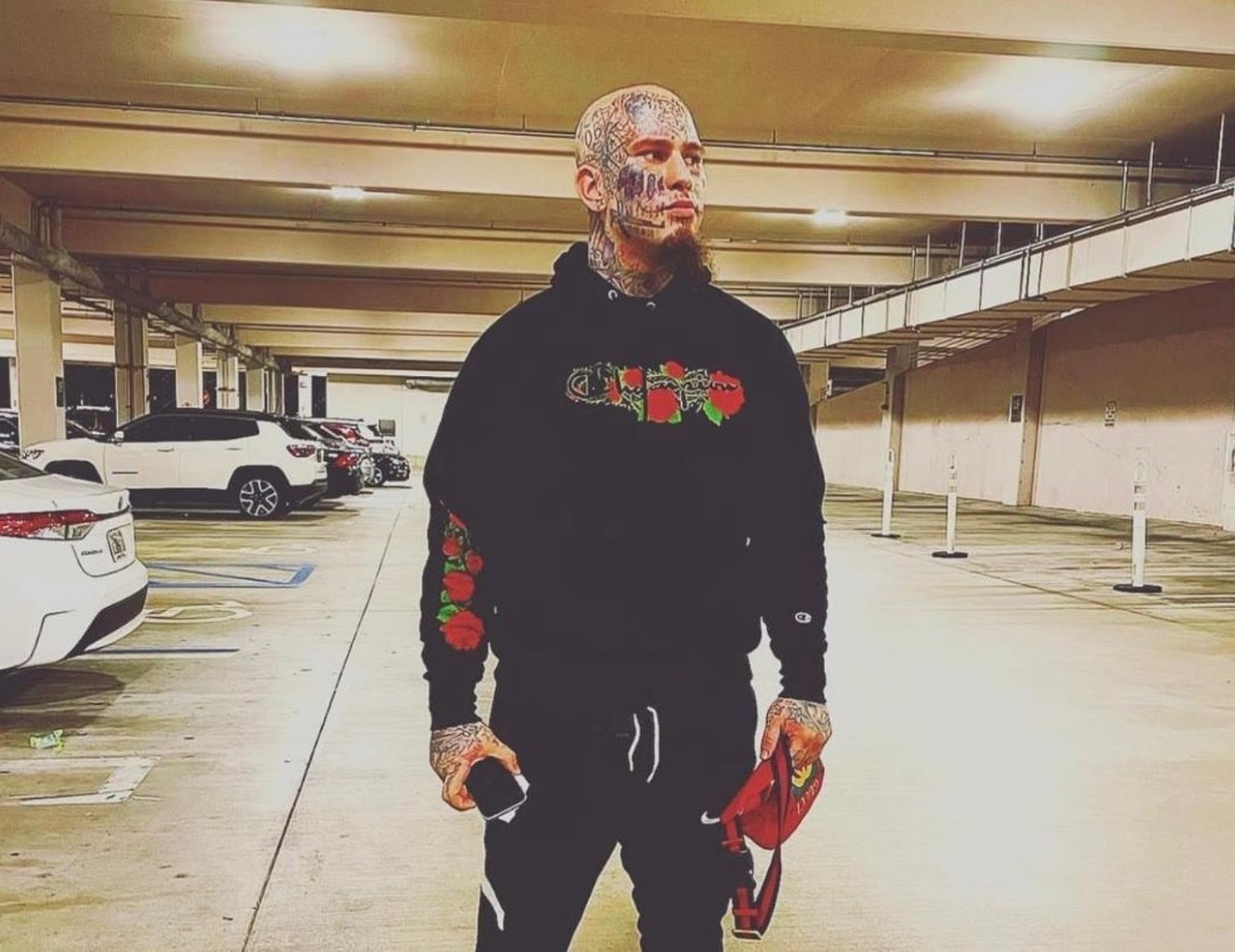 Photo by Phillip Katsabanis
Phillip Katsabanis, a popular South Florida rapper known as Stitches, was arrested by a cadre of Bay Harbor Islands cops on August 3 for cocaine possession and "firing a firearm in public," police said.

Best known for a song about cocaine called "Brick in Yo Face," Katsabanis told police that "he was defending himself and protecting his wife" before he was arrested and hauled off to Turner Guilford Knight Correctional Center.

The song's prescient lyrics set the scene for what took place: "I put that brick in yo face. Now what you gon' do with it?"

Well, it's anyone's guess what Bay Harbor Islands police did with a stash of cocaine allegedly seized last month from the rapper's bar area. Maybe it's in a locker? The lunchroom? Someone's trunk? Because it never made it to the Florida Department of Law Enforcement's controlled substances crime lab.

On September 7, Miami-Dade prosecutors approved a "no action" memo and dropped charges against Miami-born Katsabanis, a 27 year old of Greek and Cuban descent, who has garnered legions of fans and tens of millions of YouTube views.

"Over thirty days have elapsed since the arrest and the police have not submitted the suspect cocaine to the lab for testing," a Miami-Dade State Attorney's Office memo said. "Therefore, the case is not actioned."

Nestled between North Miami and Bal Harbour, Bay Harbor Islands is a .6-square-mile town on Biscayne Bay with a population of roughly 5,900. New Times obtained 12 pages of the town's police narratives via a public records request that describe a chaotic scene last month at Katsabanis' business, a studio space with pricey music equipment and a bar, in the 1000 block of 96th Street.

It was a major case for the small town that involved a high-profile tattooed rapper, guns, drugs, and media buzz.

Katsabanis said he saw "four black males, one armed with a rifle with a scope on it," according to the police records. "He advised the subjects numerous times to leave the premises."

"A white female, later identified as Mrs. Erica Katsabanis, came to the doorway and said the subjects are there," one sergeant wrote, describing the rapper's wife. "According to Erica and Phillip, they did not know the armed trespassers and could not give a description except they were black and had weapons."

Two construction workers from a nearby job site told officers, at 6:52 a.m., that "they did not hear gun shots."

Katsabanis says his landlord evicted him shortly after the arrest.

Bay Harbor Islands police cordoned off the area with crime scene tape, and an investigation led cops to impound a Springfield Armory 9 mm handgun and an FN Five-seven pistol.

Both weapons were registered to Katsabanis, according to the police report. He told police that he had taken painkillers and cocaine prior to seeing the armed intruders, the report says.

It remains unclear how much of the "white substance" was impounded. According to a Bay Harbor Islands property log, cops seized a "container with a white powdery substance and blue pills weighted [sic] 226 grams with container."

For the metrically challenged, 226 grams is about half a pound.

The blue pills were not identified and their amount was unspecified. The type of container, and its tare weight (the weight of the empty container), was also unspecified.

Bay Harbor Police Chief Raul Diaz did not return a message from New Times asking why the cocaine wasn't submitted to the crime lab for testing, or where it ended up.

As for the charge of illegally "discharging a firearm in public for recreational purposes," cops may need a bump and a refresher course.

"Although the police found no evidence of armed intruders, the defendant [Katsabanis] advised that he fired his weapon indoors, in his own business, with the reasonable belief that he was protecting himself and his family," the Miami-Dade State Attorney's Office memo said. "The firing of the weapon was not in public and not done in a reckless manner."

The heavyset rapper, who stands six feet two and weighs 240 pounds, has an AK-47 tattooed on his face and sometimes raps holding an assault rifle.

When asked why he fired only two rounds, Katsabanis tells New Times that he wanted to use the appropriate level of self-defense to protect his wife.

"I gave warnings, and there were so many logistics, and I tried to do everything right by the law," Katsabanis says.

The day after his arrest, Katsabanis dropped a YouTube video for his song, "I Hope That Don't Change a Thing." The video had been made several months prior, Katsabanis tells New Times.

"Sometimes I gotta pull the trigger. That's just part of the game. That don't mean that I don't feel ashamed," he raps in the tune.
KEEP MIAMI NEW TIMES FREE... Since we started Miami New Times, it has been defined as the free, independent voice of Miami, and we'd like to keep it that way. With local media under siege, it's more important than ever for us to rally support behind funding our local journalism. You can help by participating in our "I Support" program, allowing us to keep offering readers access to our incisive coverage of local news, food and culture with no paywalls.
Make a one-time donation today for as little as $1.