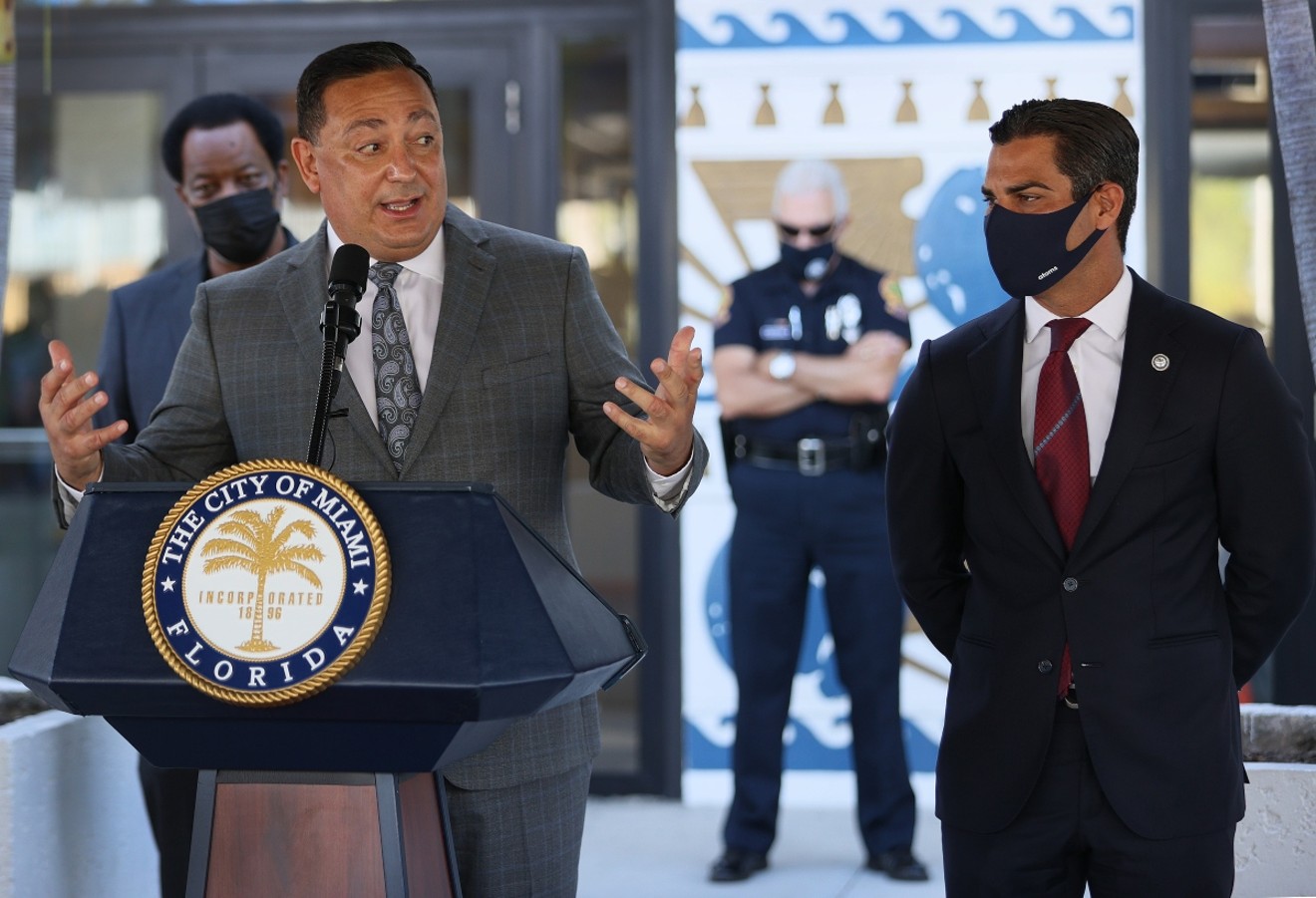 The guest of honor — who was born in Havana and of Cuban descent and left his job as top cop in Houston in April to take the reins in Miami — was not present for the commission's version of an auto-da-fé. He'd previously apologized on Twitter for the quip, explaining that it was uttered in the context of highlighting diversity within the MPD. "While the statement was made to be humorous," he wrote, "I have since learned that it is highly offensive to the exile Cuban community, of which I am a proud member. I want to thank City of Miami Commissioners for kindly informing me this morning that historically, the Castro regime referred to the exile community in Miami as 'the Cuban Mafia.'"

At today's meeting, the five-member commission's three Cuban-Americans — Joe Carollo, Alex Diaz de la Portilla, and Manolo Reyes, often referred to as the Three Amigos — weren't in a forgiving mood, or, for that matter, a kind one. During a kangaroo court proceeding that could have been mistaken for a marathon comedy sketch, the trio aired a litany of Acevedo's previous alleged misdeeds and bemoaned his penchant for speaking candidly to the media.

That said, having been provided ample notice, the chief had beaten the Amigos to the punch, delivering a pre-emptive salvo in the form of an eight-page memo to City Manager Art Noriega and Miami Mayor Francis Suarez accusing Carollo, Diaz de la Portilla, and Reyes of "continued retaliation and [efforts] to harass and intimidate" him for his attempts to reform the department he took over in April. Acevedo closed the memo by vowing to report his findings to the proper authorities. (The memo is embedded at the end of this article.)

Commissioner Ken Russell, who in the past has defended Acevedo's hiring, was noticeably absent from today's affair.

"During discussions with the City Manager, City Clerk, and City Attorney this past weekend, I expressed my concern that public discussion regarding the accusations, or counter-accusations that might be made against Chief Acevedo, would only serve to put the City of Miami at legal risk," Russell said in a statement to New Times. "With all due respect to three of my fellow Commissioners and their understandable interest in addressing the accusations made against them, I do not believe today’s special meeting should have taken place and I did not attend. I do believe that these accusations should be investigated and support that process moving forward."

Reached by New Times via email on Monday, a spokesperson from the Miami division of the Federal Bureau of Investigation said the agency was "aware" of Acevedo's memo but could not provide more information.

Commissioner Jeffrey Watson of District 5 was present at the meeting but did not comment for the majority of the proceedings.

Mayor Francis Suarez — who had raised ire on the dais when he and City Manager Art Noriega bypassed the commission and hired Acevedo on their own — was conspicuously absent from today's meeting and did not return New Times' request for comment. (Suarez was occupied on Twitter, where he was a guest on Anthony "Pomp" Pompliano's The Best Business Show. The two discussed bitcoin.)

Acevedo did not respond to a request for comment from New Times on Monday.

In a July interview with New Times, Acevedo said his tenure with MPD so far had been reminiscent of Game of Thrones — the popular HBO fantasy drama series known for its plotlines rife with backstabbing, backdoor alliances, and shaming.

Indeed, the medieval lands of Westeros and Essos have nothing on the Miami City Commission chambers.

"[Acevedo] feels he can do whatever he pleases," Carollo fumed during today's special session. "He is not accountable to anyone. Not accountable to the city manager or to the residents of the City of Miami. Period."

In his memo, Acevedo had laid out several instances where commissioners had, he alleged, interfered with police business: Diaz de la Portilla's public discussion of an internal MPD investigation into a popular sergeant-at-arms whom Acevedo had relieved of duty; the commission's defunding of the deputy chief position Acevedo had filled with a former subordinate from Houston; and Carollo's alleged urging of Acevedo to arrest "Communist" agitators at a July 31 Patria y Vida protest.

The Amigos declared that the allegations were false. Diaz de la Portilla, who chaired the meeting, called them "outright lies"; Reyes proposed a resolution to investigate the allegations; and Carollo, who has his own long history of misconduct and corruption allegations and all-around crazy moments as a politician, launched into a protracted rundown of Acevedo's past, including references to an infamous, fatal drug raid that occurred while he was leading the Houston Police Department and a clip of Acevedo slapping a woman's behind with a ticket during a dance number on Dancing With the Stars in 2008.

The trio of commissioners, who at one point had been allies who voted as a bloc on many issues, had recently split amid a feud between Carollo and Diaz de la Portilla over various scandals. But Acevedo appears to have reforged their political alliance; the three engaged in courteous banter as they blasted away at the police chief.

Carollo, flexing his political muscles in a thinly veiled threat to seek Acevedo's termination, also directed a line of questions to City Manager Noriega, who wields the ultimate authority to hire and fire city employees.

"We've always acknowledged this — that [Acevedo] is an employee of the city manager. However, we are the legislative body," Carollo said.

Carollo then asked Noriega how he'd come to hire Acevedo and to what level the city manager had vetted the high-profile stealth candidate prior to anointing him to replace retiring Chief Jorge Colina.

"Did we do an in-depth vetting of him? No," Noriega told commissioners, prompting commissioner Reyes to say he could have just "Googled" Acevedo to find dirt on him.

Despite his reputation as a progressive and community-minded chief, Acevedo has weathered a number of controversies stemming from his various positions at other police departments, a résumé New Times outlined when Acevedo came aboard. Many of those incidents were recited into the record by Carollo, who at one point read verbatim from a website called ArtAcevedoFiles.com, which was created last Thursday by an anonymous registrant, according to domain records.

An advertisement truck with the message "Art Acevedo is 'the Lebron James of performative self promotion'" and a link to the Art Acevedo Files website was spotted driving around Coconut Grove on Sunday, only hours before the meeting.


Spotted in #CoconutGrove #Miami on the eve of the big conversation at city commission about @ArtAcevedo probably paid for by the @miamifop or @JoeCarolloNow's PAC, we'll find out for ya (and fact check). Later on #PoliticalCortadito pic.twitter.com/Et7Phe0Kx5

Among the knocks against Acevedo listed by Carollo: a 2004 lawsuit in which a female officer of the California Highway Patrol alleged she and Acevedo had an affair and accused him of showing various supervisors nude Polaroid photos of her. Acevedo settled the matter out of court.

One of the more high-profile black eyes from Acevedo's time at the Houston Police Department (HPD) was the so-called Harding Street raid of 2019, when officers killed two people on false pretenses. Acevedo initially defended one of the officers, who was later accused of falsifying reports. A federal suit filed by the families of the deceased is ongoing, and Acevedo has traveled to Houston numerous times since arriving in Miami, Noriega said during today's meeting.

Acevedo has been criticized for some of his comments on criminal-justice reform, such as when he blamed cash bail reforms for a rise in violent crimes in Houston last November. A recent report from the nonprofit Safer Cities compared those comments to the "fear-mongering" tactics used by the likes of Fox News' Tucker Carlson.

Meanwhile, some in Miami have praised Acevedo's seeming commitment to cleaning up a police department long plagued by corruption and allegations of excessive force.

Speaking to New Times in July, Stanley Jean-Poix, president of Miami's Black police union, said he believed Acevedo was out to do the right thing, and his firing of high-profile officers for alleged misconduct was a testament to his commitment to reform.

In June, Acevedo fired former Deputy Chief Ronald Papier and Papier's wife, Commander Nerly Papier, for an alleged coverup of a crash that popped the tires on a police vehicle that Nerly Papier proceeded to drive to police headquarters without reporting it to her supervisors — a violation of department protocol.

The firing appears to have drawn criticism from Miami's Fraternal Order of Police (FOP), the police union that represents a number of MPD officers.

Earlier this month, FOP president Tommy Reyes took photos of damage to Acevedo's unmarked police SUV, including scuff marks and a slight separation of the vehicle's fender — damage that allegedly was not reported to MPD. Reyes told the Miami Herald that if the popped tires on Nerly Papier's vehicle constituted a crash, then the damage to Acevedo's SUV should be considered a crash as well.

The FOP has previously criticized Acevedo for alleged hypocrisy for suspending an officer for using a hand sign associated with white-power extremists in a photo. The union posted a photo of Acevedo using a similar hand gesture, captioning the image: "Do as I say, not as I do" — a phrase repeated by Carollo at Monday's meeting about Acevedo. (Acevedo said the photo was taken at a ceremony to honor the late George Floyd at the high school Floyd attended in Houston and that the gesture means something completely different to those who attend the school.)

In a scathing memo obtained by New Times, the FOP also criticized Acevedo for his comments about the "Cuban Mafia," calling the remarks "racist, incendiary, polarizing, and unbecoming of a chief."

In the end, the commissioners voted unanimously to create an investigative body to look into Acevedo's allegations — and to investigate him. Another special session is scheduled for Friday.

Though the strife within the police department and the commission has now been aired for all to see, it remains unclear what will happen next. One thing, however, seems certain: Miami taxpayers will pay the tab.