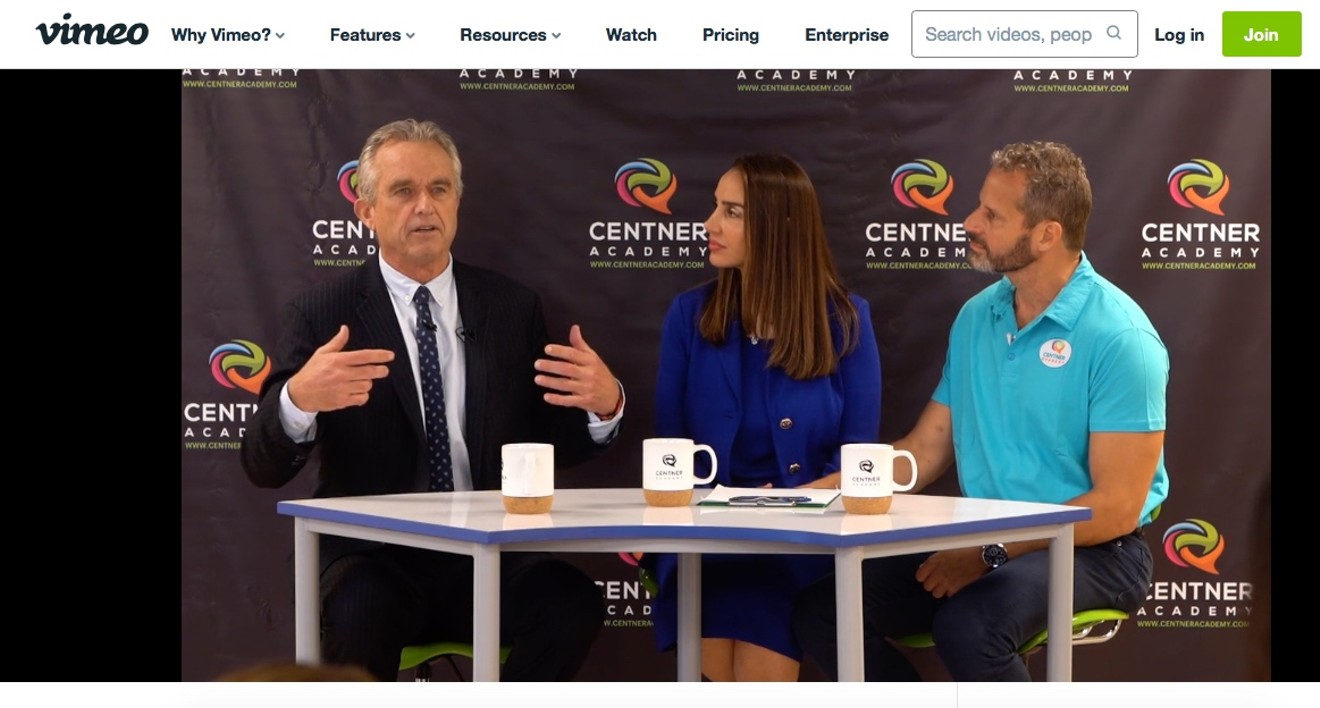 Robert Kennedy Jr. speaks at Centner Academy on January 28. Screenshot via Vimeo
Earlier this week, the New York Times reported that Centner Academy, a small private school with two campuses in Miami, had enacted a policy that essentially forbade teachers from getting vaccinated against COVID-19 if they wanted to remain in the classroom.

The school's co-founder, Leila Centner, sent an email to staff last week stating that teachers who have already received the vaccine will not be permitted to interact with children and that teachers who get vaccinated over the summer may not have a job waiting for them in the fall.

Since opening in 2019, Centner Academy has in some ways branded itself as the school of choice for wealthy parents who don't want their children to be vaccinated. Unlike Florida public schools and even the majority of the state's private schools, Centner Academy does not require students to have any vaccinations before enrolling. And in recent months, as the COVID pandemic continued to rage, the school hosted speeches by at least two so-called anti-vaxxers.

In April, Centner Academy presented a Zoom discussion on mask policies and the COVID vaccine with Dr. Larry Palevsky, a Long Island pediatrician who has advised parents not to vaccinate their children. New Times was unable to find and review a recording of the virtual event.

But the blockbuster speech was delivered by Robert F. Kennedy Jr., a son of the late Robert F. Kennedy and nephew of the late U.S. President John F. Kennedy. A longtime environmental lawyer, RFK Jr. now runs the Children's Health Defense, an anti-vaccine advocacy group. He and Centner Academy co-founder David Centner, Leila's husband, recently worked together on a film that attempted to draw a parallel between the COVID vaccine push and the racist Tuskegee syphilis study that began in the 1930s.

Centner Academy welcomed Kennedy for two in-person lectures on January 28. New Times reviewed recordings of both talks, which can be found on Vimeo. (You can view the videos here and here.)

In both sessions, Kennedy — who described the Centners as "like family" — treated attendees to a well-rehearsed spiel similar to other talks he's given about what he frames as the dangers of vaccines.

Most notably,  he made claims about the COVID vaccine that appear to have informed the Centners' eventual policy with respect to the teachers in their employ.

Kennedy, who appeared maskless alongside both Centners at the indoor events, made a point to say that he is "not anti-vaccine" before launching into a series of statements casting doubt about the safety and effectiveness of the COVID shots.

"I would never say I'm against the COVID vaccine, but I will say there is big problems with the mRNA vaccines, with both the Pfizer and the Moderna vaccines," he told the audience.

Kennedy said his main beef with the vaccines is that there is "no evidence that they prevent transmissibility." That, he told the crowd, might mean vaccinated people cause a risk to unvaccinated people because they may become infected with COVID but not show any symptoms and therefore unknowingly pass along the virus.

Kennedy compared that dynamic to people who get the chickenpox vaccine. According to the FDA, people who are vaccinated against chickenpox are advised to avoid contact with medically vulnerable people because in rare cases, vaccinated people can transmit the vaccine virus to others.

"For example, the chickenpox vaccine — the package insert says if you take this vaccine, do not go near pregnant women or immunocompromised people for six weeks, all because you are shedding that virus and you can injure them and you won't know it," Kennedy said. "Because if you got chickenpox, you're gonna stay home. If you get the vaccine, you're still shedding virus and you don't know it, and you can injure people without knowing that you did it."

Kennedy also asserted that the COVID vaccines "are unapproved."

"These vaccines, at this point, do not have their FDA license," he said.

At the time Kennedy gave the speeches, scientists were unsure whether vaccinated people could pass along the coronavirus to others. While the debate remains unsettled, early research indicates that the vaccine reduces the possibility of viral transmission.

And, as we saw before the vaccine became available, unvaccinated asymptomatic carriers have played a major role in spreading the coronavirus. Asymptomatic people who do not wear a mask are even more likely to transmit the virus to others.

During the pandemic, Centner Academy has allowed parents to request a mask exemption for their children, according to comments Leila Centner made during Kennedy's talks. Numerous photos and videos on the school's Instagram page show maskless children and adults inside classrooms.

More context is needed to address Kennedy's claims that the COVID vaccines are "unapproved" and "do not have their FDA license." Although the three vaccines being deployed in the U.S. — Pfizer, Moderna, and Johnson & Johnson — were rolled out under an emergency-use authorization, each of three has been tested on tens of thousands of trial participants, and all three companies have published results from those trials.

"COVID-19 vaccines approved for use in the U.S. and UK are not experimental and have all completed animal and clinical trials," Reuters concluded in another fact-check.
click to enlarge

A flow chart shows the difference between emergency-use authorization and FDA approval.
Graphic courtesy of UNC Health
Three months after Centner Academy hosted Kennedy, Leila Centner is parroting some of the talking points he stressed at the school.

In an interview with CBS Miami this week, she asserted that the COVID vaccines are unproven.

"Let's get more information. Let's learn more about this...," she said. "It's an experiment right now."

Similarly, the email she sent to school staff claimed that "reports have surfaced recently of non-vaccinated people being negatively impacted by interacting with people who have been vaccinated" — an echo of  Kennedy's January warning. In the email, Centner linked to an article on a website called the Daily Expose that has been widely debunked by fact-checkers.

Centner Academy's media team did not respond to an email from New Times asking whether Kennedy's speeches influenced their school policy regarding the COVID vaccination.

Two weeks after his talks at Centner Academy, Kennedy was deplatformed from Instagram "for repeatedly sharing debunked claims about the coronavirus or vaccines," according to the company.

Then again, Kennedy himself has said his statements should be treated with skepticism.

"Don't trust anything I say," he told the audience in Miami. "You should verify it."

Staff writer Joshua Ceballos contributed reporting.
KEEP MIAMI NEW TIMES FREE... Since we started Miami New Times, it has been defined as the free, independent voice of Miami, and we'd like to keep it that way. With local media under siege, it's more important than ever for us to rally support behind funding our local journalism. You can help by participating in our "I Support" program, allowing us to keep offering readers access to our incisive coverage of local news, food and culture with no paywalls.
Make a one-time donation today for as little as $1.