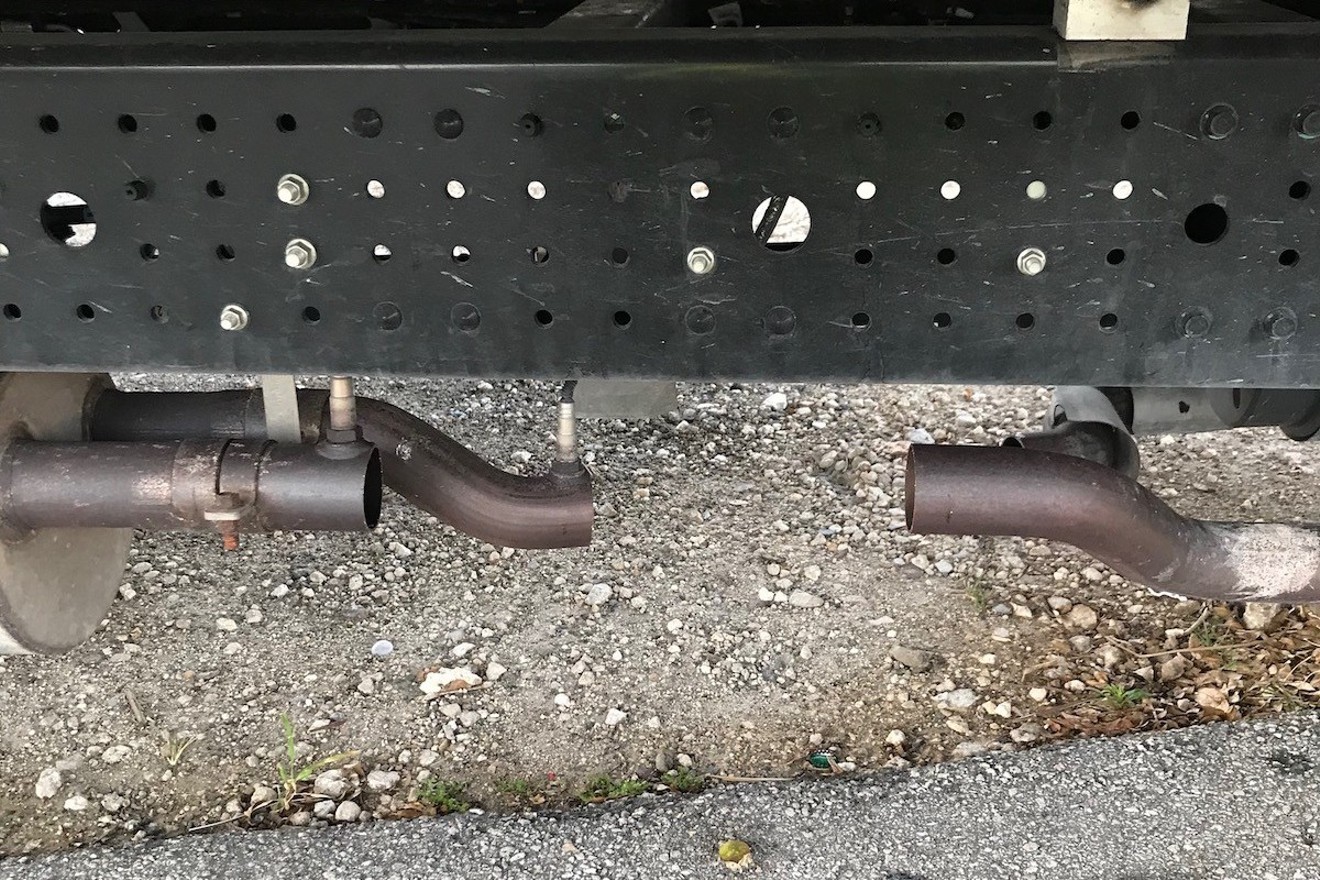 What is wrong with this picture? (Hint: There's something missing.) Photo courtesy of Nick Bofill
On May 9, Nick Bofill was en route to work when an employee of his bee-removal company, the Native Guy, called to let him know that one of their dump trucks was making a strange noise.

When Bofill arrived at their warehouse on Bird Road to see what was wrong, it turned out the problem was in the exhaust system: specifically, the catalytic converter, a chamber mounted on the underside of the vehicle that reduces internal-combustion pollutants and is required in most states to pass emission tests on cars and trucks.

It was gone, excised from the truck's belly with surgical precision.

Bofill notified the police, but because the crime wasn't clearly captured on the nearby surveillance cameras, not much could be done. Even though he was insured, Bofill wound up spending nearly two months and $10,000 to replace the part.

Nine weeks later, on the evening of July 18, Bofill was leaving the warehouse when he spotted a car that had no license plate. His gut feeling was intensified by the sound of a saw whirring near the vehicle. He hopped in his truck, drove over to where the car was parked, and, "how a Dade County boy would do," ran up to it.

He confronted two young men, who said they'd been stealing tires. He called the police, and when the officers arrived, he says, they searched the car and found three catalytic converters that appeared to have been jacked earlier that night.

"I wanted to get to the bottom of this because my neighbor, the poor guy, got hit with six catalytic converters off of his trucks," Bofill tells New Times. "So I thought they were gonna go hit him up again. Little did I know they were hitting up the next strip of warehouses."

Over the past several years, catalytic converters have become a hot target for thieves across the United States, as the price of the three precious metals that put the catalyst in catalytic — platinum, palladium, and rhodium —has increased. According to the National Insurance Crime Bureau (NICB), an Illinois-based nonprofit that partners with insurance companies, police, and consumers to combat theft and insurance fraud, nearly 3,400 catalytic converters were stolen from cars in the U.S. in 2019. That number more than quadrupled the following year, then rose to a whopping 50,000 in 2021. Per the automotive website Edmunds.com, an adept thief can purloin a catalytic converter in under two minutes.

In response to the epidemic, more than two dozen states have considered and/or implemented legislation to stem the tide. Mississippi, for example, recently increased fines for anyone caught stealing a converter. And thanks to a new law signed by Arizona Gov. Doug Ducey, anyone who purchases an aftermarket catalytic converter in the state must report the sale and note any identifying markings or numbers on the part.

But while Florida has seen a similar trend in catalytic converter theft, lawmakers in Tallahassee appear to have no plans to crack down on the crime, according to the NICB.

The NICB is tracking 152 different pieces of legislation at the state level. (A number of states have multiple laws under consideration.) Meanwhile, Florida is one of 13 states that aren't on that list.

Were it not for theft, a catalytic converter would last ten years or so. Replacement costs upward of $1,000, depending on make and model. (Generally speaking, the bigger the car, the more expensive the replacement part.) According to the NICB, converters from the Ford F-series trucks and Honda Accord sedans are typically the most common targets for catalytic converter theft. Trucks, which ride higher off the ground, are at greater risk owing to easy access.

Or, as Bofill would advise: "Just make sure you keep your cameras updated."
KEEP MIAMI NEW TIMES FREE... Since we started Miami New Times, it has been defined as the free, independent voice of Miami, and we'd like to keep it that way. With local media under siege, it's more important than ever for us to rally support behind funding our local journalism. You can help by participating in our "I Support" program, allowing us to keep offering readers access to our incisive coverage of local news, food and culture with no paywalls.
Make a one-time donation today for as little as $1.