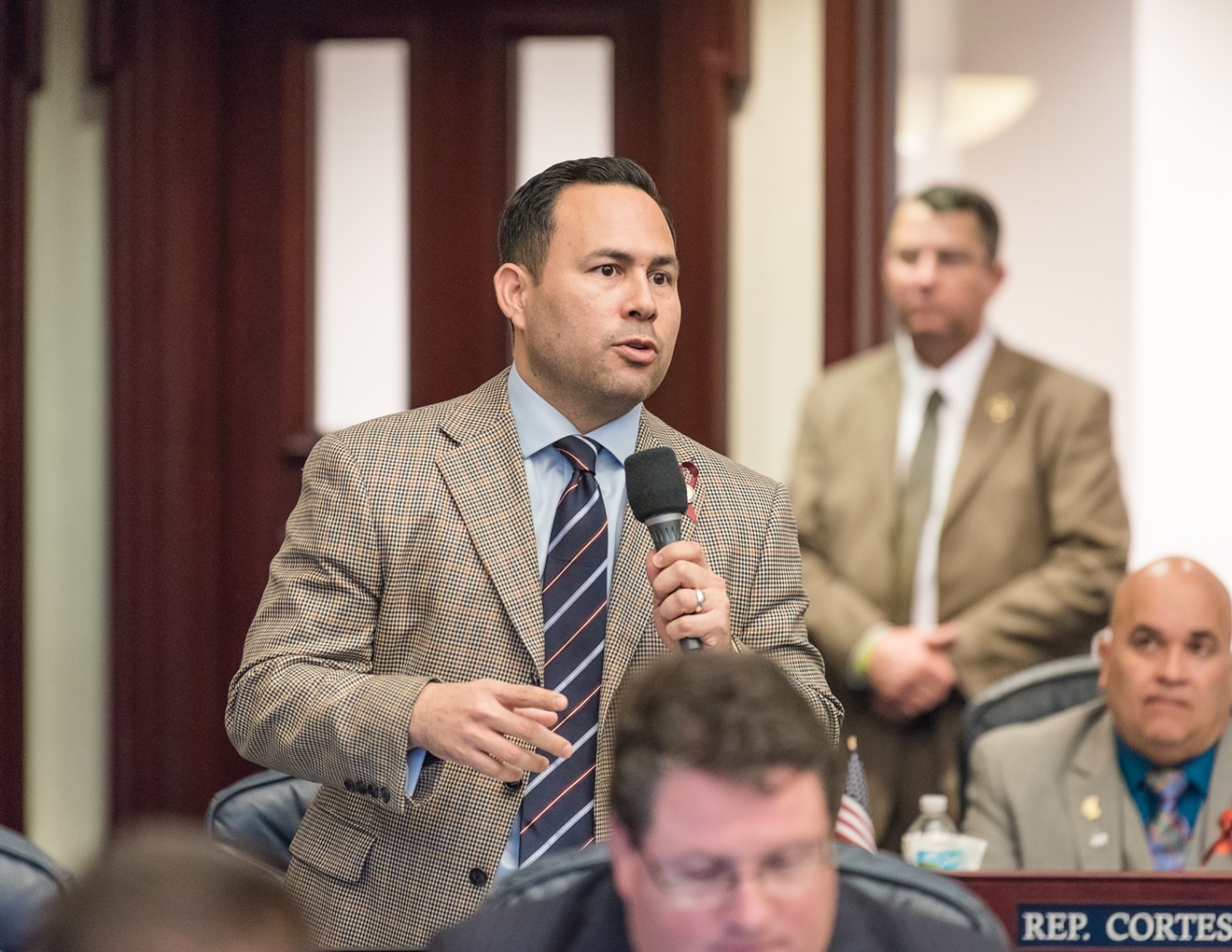 Florida Rep. Nick Duran Photo by Florida House of Representatives
Earlier this month, some Miami-Dade residents received a mass text telling them to keep an eye out for a dubious character.

"Coral Gables Neighborhood Watch," one of the texts said. "Be on the lookout for suspicious person Nicholas Duran, age 38."

"Nick Duran has a record a mile long," a voiceover in the the video claims. "Duran has multiple arrests for assaulting police, alcohol abuse, and parole violations."
The texts arrived in the lead-up to a particularly divisive November 3 election. With mere days to go, Miami-Dade voters are being bombarded with attack ads and mailers, often filled with misleading claims. After reviewing the allegations against Duran, New Times determined the attack ad left out some important context. While Duran does have an arrest record, characterizing it as "a mile long" is a bit of a stretch.

The YouTube video references a misdemeanor arrest from when Duran was a college student at the University of Florida. A criminal background check obtained via the Florida Department of Law Enforcement shows Duran was arrested by Gainesville police in 2003 for hosting a house party where minors consumed alcohol. He was also charged with resisting or obstructing an officer without violence.

Duran pleaded no contest to the charges. A judge withheld adjudication — a legal term that means there was no formal conviction — and ordered him to serve six months of probation. In 2005, Duran was arrested again on a probation violation from 2003, according to the Florida Department of Law Enforcement. (Duran says he paid a fine.)

The attack ad also references a 2001 arrest for disorderly conduct in Fort Lauderdale. But the case was expunged, and there's no record of it with the Broward County Clerk of Courts today.

The video was produced by Transparency in Government PC, the political action committee of Duran's Republican opponent, Bruno Barreiro, who is a former Miami-Dade County commissioner. The committee made versions of the ad in English and Spanish and posted both on its YouTube page. So far, the videos have about 5,500 total views.

Reached by New Times, Duran acknowledged the arrests were from his college days.

"I'm not infallible, just like most other people in this world," he says. "It's incumbent on us to learn from our mistakes. That was a mistake that happened 15-plus years ago. I've learned from that. I went on to become a lawyer. I'm a member of the [Florida] Bar, a two-term member of the Legislature. If this is something [my opponent] wants to hang his hat on, that's difficult to comprehend. It's difficult for him to fight with the reality of who I am now and how I've helped my community."

Duran works as the executive director of the Florida Association of Free and Charitable Clinics, a nonprofit that provides free or low-cost medical services to underserved communities. He's seeking a third term in the Florida House.

Barreiro, Duran's opponent, is a longtime politician. He was elected to the Florida House of Representatives in 1992, served as a Miami-Dade commissioner from 1998 to 2018, then resigned from the commission to launch an unsuccessful bid for Congress. He's perhaps best known as the architect of the Marlins Park fiasco.

Barreiro tells New Times that his political committee released the video because he thought it was important for voters to know about Duran's arrests. He says he doesn't think it's misleading to call two misdemeanor arrests from 17 years ago a mile-long record.

"It shows a pattern of behavior, and I think that's important for the people to know, for voters to be informed," Barreiro says. "There's no reason why we should hide our past."

Barreiro says the PAC disseminated the YouTube link in an email blast, but he denies sending out the mass text and says he disapproves of the be-on-the-lookout, neighborhood crime watch language. New Times couldn't confirm who sent the texts, and Barreiro says he didn't know who was responsible for them.

The video also attacks Duran as a "party boy" who blew off a special session in June 2017 to go fishing with another state representative. Duran claims he went fishing when the day's business was over and says his opponent is playing "fast and loose" with his attacks when Barreiro himself has a history of being an absent politician.
KEEP MIAMI NEW TIMES FREE... Since we started Miami New Times, it has been defined as the free, independent voice of Miami, and we'd like to keep it that way. With local media under siege, it's more important than ever for us to rally support behind funding our local journalism. You can help by participating in our "I Support" program, allowing us to keep offering readers access to our incisive coverage of local news, food and culture with no paywalls.
Make a one-time donation today for as little as $1.