Miami's Wild Parrots Are Being Poached, and There's No Law to Protect Them The blue and gold macaws in Feinstein's neighborhood. Photo courtesy of Neil Losin / Day's Edge Productions.
Every morning for the past 25 years, a flock of blue and gold macaws has flown into Daria Feinstein’s backyard in Coral Gables. They swoop between surrounding homes and over boats docked on the nearby canal to perch on Feinstein’s royal palms and poincianas or maybe have a bite to eat on the artificial nests she’s set up for them.

In 2010, one of Feinstein’s favorite wild parrots, Scruffy — an old blue and gold macaw she named for the bird's frayed feathers — began showing up in her yard with a youngster she named Fuzzy for a fluff of red fuzz on his head.

“He was a character,” Feinstein says of Fuzzy. The baby would always disobey  and swoop down to eat before he was given the signal. “I was afraid he’d never get airborne because he’d eat so much.”

A year later, Fuzzy disappeared. Feinstein thought perhaps he’d grown up and found a mate in a different place. "But," she says, “one by one, more just kept disappearing.”

Feinstein began to hear similar reports from fellow members of the Bird Lovers Club, a nonprofit dedicated to South Florida’s avian population. A professor at the University of Miami told her someone came on campus with a net gun and took six birds. One of the other feeders in her neighborhood said the macaws were flying at night. “Parrots don’t fly after nightfall,” Feinstein says. “Something scared them.”

Feinstein realized the parrots were being poached. Since 2010, she says, the number of blue and gold macaws in her neighborhood has gone from 44 to 12 because of legal poaching. Parrots can sell for thousands of dollars each on local and national websites, which is motivation for poachers.

State and federal laws protect native birds from being taken from their nests, out of trees, and sold into the pet trade or otherwise. But it’s technically not illegal to collect Miami’s wild parrots. Though many of the city’s ten distinct species have been here since the 1920s, they’re not considered native. And despite their small numbers — Feinstein says the blue and gold macaws in Coral Gables are likely all from one flock — no law protects them from poaching.

“If you shot my dog, somebody would arrest you,” says Shawn Denton, whose wife Terry was president of the Bird Lovers Club. “If you shot my parrot, they probably wouldn’t... Feral dogs in the area are invasive and yet they’re still protected.”

Feinstein and other members of the Bird Lovers Club have been advocating for protection for the wild parrots for seven years, to no avail. Meanwhile, Feinstein says, the parrots' numbers continue to decrease. Feinstein with one of her six macaws.
Photo courtesy of Neil Losin / Day's Edge Productions.
Some municipalities in South Florida — such as Coral Gables and Pembroke Pines — have bird sanctuary laws. But even these are rather weak. Shawn Denton, who was the director of public services for Pembroke Pines, says the city has stronger protections for its royal palms than wild parrots. (Terry Denton notes with irony that some royal palms aren’t native to Florida either.) To protect the birds nesting at the top of the royal palms, Shawn began posting signs in front of the trees in 1997 to warn people of the fines associated with climbing them.

Two years ago, the Bird Lovers Club’s organizing reached its apex when the Dentons gave a presentation on Miami’s wild parrots before the Florida Fish and Wildlife Conservation Commission. The club's goal was to pressure the commission into creating an exception for the parrots so they could be legally protected from poaching. Two hundred people showed up in support.

Terry Denton says that everyone she spoke with, including Everglades National Park rangers and biologists, agreed the macaws were likely not invasive or bad for the environment. Their range is confined to Miami’s urban landscape, where they feed on exotic plants that aren’t integral to the diets of native animals. “We were just saying, please, just protect them so that people can’t climb trees and grab the babies out of the top,” Terry says, “and that they can’t do anything to harm these birds for profit, because that’s all this is, is profit.”

The commission did not make an exception for the birds. “The reason they gave us was that it was a slippery slope,” Feinstein says. “If we do it, then the turtle people will come and the lizard people will come, and they didn’t want to make any more exceptions.”

Terry Denton says that after the ruling, all momentum was lost. “How many lectures can you give? How many people can you talk to? How many vets can you talk to? That's the point it gets to,” she says. “You just have to keep going. You can’t lose hope if it’s something that you really think is wrong.”

Without legal protection for the birds, Feinstein, the Dentons, and other members of the Bird Lovers Club have taken matters into their own hands and organized a group of people to feed the birds in their neighborhoods and find new homes for the injured. Dean Swade, the current president of the Bird Lovers Club, estimates that since 2010, the club has saved 700 to 800 birds per year in Miami, many of wild parrots.

Swade says he gets calls from all over, including the Wildlife Care Center in Fort Lauderdale, the Pelican Harbor Seabird Station, and even neighbors who come across injured birds. “No one else will take them in,” Swade says. “They’re in a gray area. There are no facilities for them to go to.” 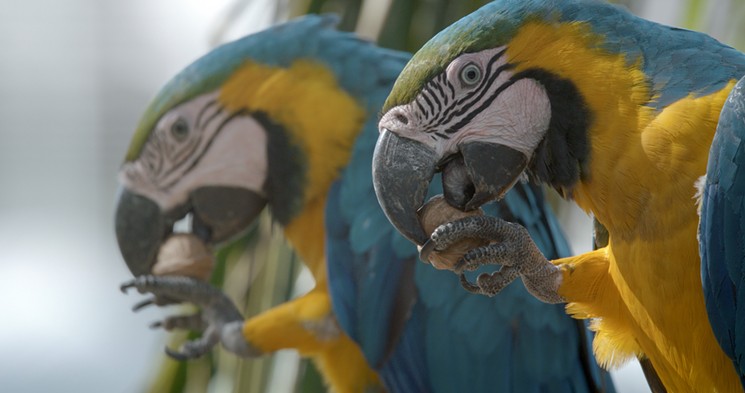 The blue and gold macaws in Feinstein's neighborhood.
Photo courtesy of Neil Losin / Day's Edge Productions.
The Bird Lovers Club has also purchased birds suspected of having been poached or mistreated. Last year, Terry Denton and Swade came across a picture on Facebook of a blue and gold macaw for sale at a pet store in Davie. “All of its feathers were plucked,” Swade says. “If they’re not getting the nutrition they need, in too small of a cage, or don’t have any toys, birds will start to pluck their feathers out.”

To rescue the bird, Swade planned to meet the seller at the Bird Lovers Club clubhouse. The man wanted the money upfront, so Terry gave him the club’s credit card over the phone. “I consider it paying a ransom to get the bird away from these people,” Swade says. After he took the bird home, Swade discovered it had a bacterial infection. After several months of care, he was able to rehome the bird.

Feinstein says she dreams of having a volunteer army of people who can protect the birds, like the California-based organization SoCal Parrots. That state has legal protections for naturalized birds.

For now, Feinstein is seeking public awareness and support. In March, she produced Parrots in Peril: Miami’s Wild Macaws, a documentary by Neil Losin, a local biologist videographer.

As much as she has tried, Feinstein can’t understand why people aren’t paying attention to the poaching of the macaws. “They’re so magical and beautiful,” she says. “It’s nature at its best to see them flying. It’s like looking at a beautiful sunset or swimming in a beautiful lake in the middle of the summer. It gives you goosebumps.”

Without legal protections, Feinstein says, the best thing South Floridians can do is to be vigilant. “The public are our eyes and ears, and we need to report poachers and stop poaching,” she says. “These birds aren’t going to be around much longer. They’re going to be gone.”
KEEP MIAMI NEW TIMES FREE... Since we started Miami New Times, it has been defined as the free, independent voice of Miami, and we'd like to keep it that way. With local media under siege, it's more important than ever for us to rally support behind funding our local journalism. You can help by participating in our "I Support" program, allowing us to keep offering readers access to our incisive coverage of local news, food and culture with no paywalls.
Make a one-time donation today for as little as $1.