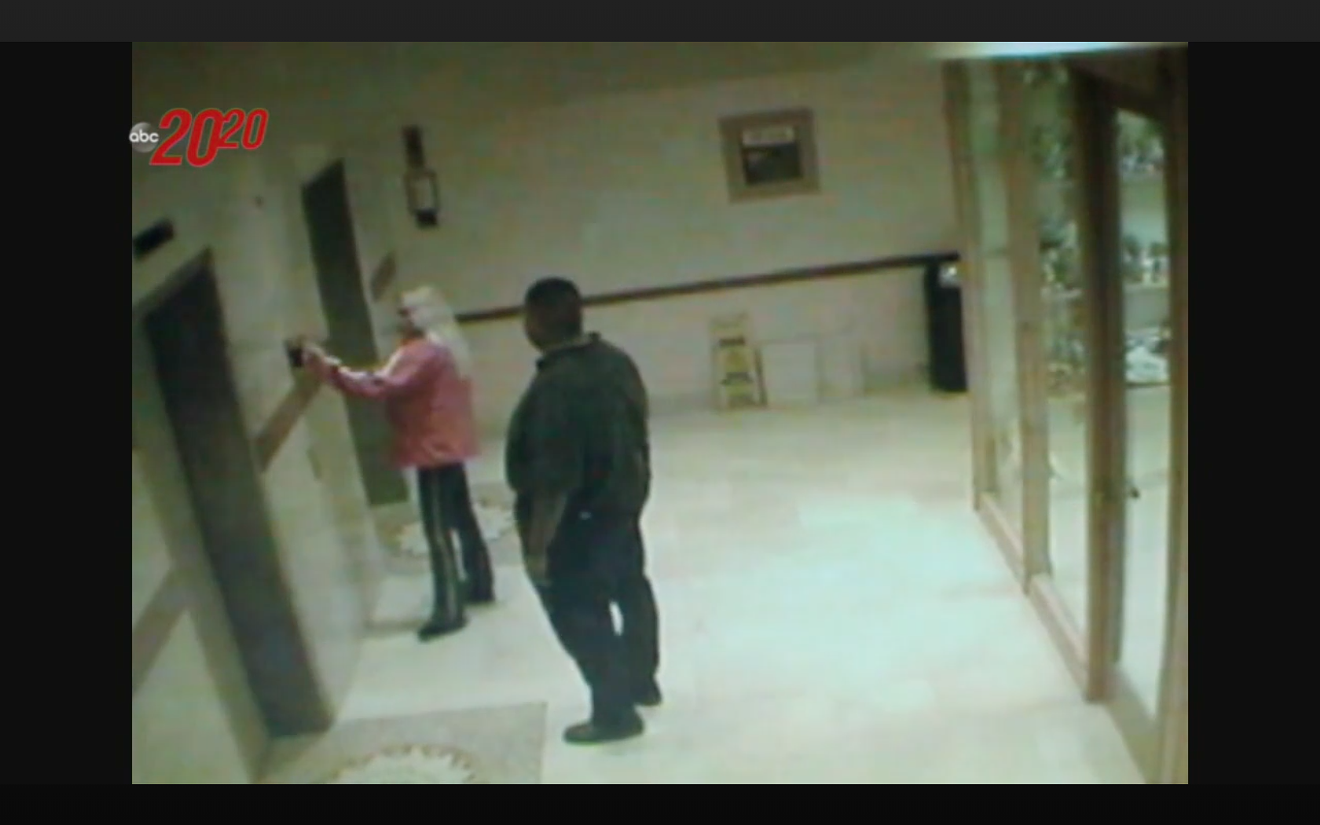 Surveillance footage shows Inna Budnytska and Michael Lee Jones getting on an elevator at a Miami hotel. 20/20
Inna Budnytska, a 21-year-old Ukrainian cruise ship worker, was recovering from an onboard injury in February 2005 when a chance encounter with a stranger at a Miami hotel nearly cost the young woman her life.

After returning to her temporary home at the Miami Airport Regency Hotel early one morning, Budnytska got onto the elevator at 3:41 a.m. Her next memory was regaining consciousness in the weeds of a vacant cul-de-sac, where a utility worker found her around 8:30 that morning. She was cold and naked and had been brutally beaten.

Budnytska struggled to remember what had happened that morning, and Miami-Dade detectives were stumped until a private investigator began looking into the case months later. Eventually, a man who'd been working at the Miami Boat Show was convicted of sexually assaulting Budnytska — and police discovered his DNA was a match in three other rape cases across the country. The Miami hotel case will be featured in a two-hour episode of 20/20 at 9 tonight.

It was only after the investigation was already underway that detectives learned Budnytska had been not only beaten but also raped. Miami-Dade Police compared the DNA evidence to two initial suspects, but they were both cleared.

Luckily for investigators, the hotel had a fairly advanced security system, including multiple surveillance cameras and a key-card system that showed when guests entered and exited their rooms. Detectives could see Budnytska boarded the elevator for the final time at 3:41 a.m. but, puzzlingly, did not enter her room until 3:58 that morning.

Inna Budnytska (left) and Michael Lee Jones
20/20 / Florida Department of Corrections
The case grew cold for several months until private investigator Ken Brennan was hired by the hotel, which was being sued by Budnytska for negligent security. Brennan teamed up with Miami-Dade Det. Alan Foote to figure out exactly what had happened.

Brennan took it upon himself to rewatch hours of the hotel's surveillance footage from the morning Budnytska was attacked. One man piqued his interest — a guy seen chatting with and entering the elevator with Budnytska at 3:41 a.m. Brennan noticed the man leaving the hotel less than two hours later with a heavy suitcase and realized there was one possible explanation: Budnytska had been stuffed inside.

Through further investigation, Brennan was able to identify the man as Michael Lee Jones, a food concessions employee who'd been in town working at the Miami Boat Show. After a long nationwide search, the investigator learned Jones was managing concessions at a minor-league baseball park in Maryland.

Foote traveled to Maryland to interview Jones, who denied sexually assaulting anyone but agreed to provide a DNA sample. Ultimately, police say, that evidence matched the sample from the crime scene, and Jones was charged with sexual battery and kidnapping.

After Miami-Dade Police input Jones' DNA into a national database, his sample reportedly matched evidence in three other cases: one in Colorado Springs and two in New Orleans.

In the end, Jones pleaded guilty in 2006 to charges of sexual battery with a weapon and aggravated battery in the Miami case and was sentenced to two years in Florida prison. Following his release in 2008, he was tried for the case in Colorado, to which he pleaded not guilty. In the end, Jones was convicted by a jury there and sentenced to 24 years to life.

"I feel happy [about the sentence]," Budnytska told 20/20. "The criminal is where he's supposed to be, and he is never gonna hurt nobody in the future."
KEEP MIAMI NEW TIMES FREE... Since we started Miami New Times, it has been defined as the free, independent voice of Miami, and we'd like to keep it that way. With local media under siege, it's more important than ever for us to rally support behind funding our local journalism. You can help by participating in our "I Support" program, allowing us to keep offering readers access to our incisive coverage of local news, food and culture with no paywalls.
Make a one-time donation today for as little as $1.