Jacksonville-based band Gilt is the organizer behind SnipFest. Photo by Christian Denmark
It's never a bad time for a good cry sesh, and on Saturday, February 6, you can scream into the void alongside a slew of indie acts as they perform for a good cause.

Started in 2018, the fest is run by Gilt, a post-hardcore band out of Jacksonville. The event came together when a friend of vocalist and guitarist Tyler Fieldhouse asked if their band could stage a benefit show for his top surgery. Although the friend asked for just one show, Fieldhouse wound up organizing events in Orlando, St. Augustine, and Miami.

This year, the band hopes to benefit more people by splitting proceeds evenly among multiple recipients. Using the proceeds to help with name changes is a switch brought on by the pandemic-driven slowdown of elective surgeries, coupled with Gilt's desire to provide an immediate donation for an action that can be undertaken from home — and one that costs more than $400 in Florida.

SnipFest's goal isn't only to raise funds; Gilt also wants to add a community-building tool to its musical arsenal. In keeping with that ethos, the band is firm on the idea that no one should be shut out of an event owing to lack of funds, so the livestream is free to all. Those who donate any amount will gain access to an archive filled with videos and art. The band curated the lineup, pulling from fan recommendations and acts it has performed alongside.

"It’s a really big deal to us to reinforce that there is not one genre, look, or style to being LGBT or queer," Fieldhouse says.

SnipFest will stream via Twitch on Saturday, February 6, from 6 p.m. to midnight. Each band will perform for 25 minutes with artists in between each set showcasing their visual submissions. Here’s a quick rundown of the acts:

Nicolle Maroulis, lead singer of Hit Like a Girl, follows the heart-on-their-sleeve approach to songwriting, with tracks like "It's Always You" and "No More Dysphoria." Listeners absorb an emotional wallop as journal entries and love poems come to life with melancholic lyrics set to an emo score.

Jhariah is a New York City duo comprised of musician/animator Jhariah and drummer Cole Raser. The two create maximalist, theatrical tracks that any Lin-Manuel Miranda fan would appreciate for their grandeur. Jhariah also directs and produces the illustrations and animations that accompany the music.

With a contradictory name that combines the quirky millennial actor and former Alaskan governor (and, if you squint a little, the Monty Python comedic legend), this Atlanta-based emo group makes "music for people who suck at parties but kill it at kickbacks." The head-banging guitar riffs will have listeners reaching for a PBR and rolling up their beanies.

Springing from Boston, indie-rock quartet Mint Green was founded by frontwoman Ronnica and drummer Daniel Huang. The band is known for its pop-punk vibes that address late-adolescent heartbreak and the pain of growing up. 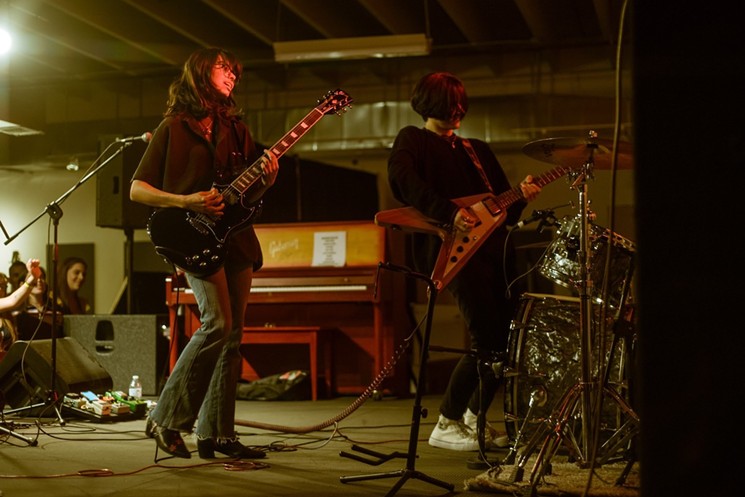 Named one of Miami's best new bands of 2019, this Kendall-based four-piece blends elements of emo, dream rock, punk, and shoegaze. On tracks like "Creature Natural," listeners get a taste of the gritty push-and-pull between genres.

Based in Maryland, Sammy Heck melts together delicate synth piano, heavy strumming guitar, and distorted vocals. Her style can be described as “shred pop," she volunteers. "It’s just bedroom pop with complicated guitar parts.” Songs like “Ego Whip” and “Mystery Machine” make the listener feel like they’re in an emotional cartoon world filled with scary yet friendly characters.

This act's hybridized name is indicative of its sound, one that blends ska with unlikely of genres such as Christmas music and emo. On A Very Skatune Christmas and Ska Goes Emo, frontperson Jeremy Hunter uses soulful horns and head-nodding basslines to bring ska to the masses.

Those seeking to dance their sorrows away to emotional lyrics masked by happy beats will find smiles and succor in Similar Kind. Since 2019, the band has operated with the motto, "music for you and your mom to listen to.” Tracks like "Nobody Loves You" are the ideal background music for a post-tussle mother-and-child dance-off.

South Florida act Woolbright's lead singer Candice Maritato describes the band's sound as "smol rock," a silly descriptor that highlights the group's ability to be gentle and heavy in the same song. Miamians may have seen Woolbright live at Churchill's Pub and Space Mountain.

SnipFest. 6 p.m. to midnight, Saturday, February 6. Stream via twitch.tv/socialdistanceparty; admission is free.
KEEP MIAMI NEW TIMES FREE... Since we started Miami New Times, it has been defined as the free, independent voice of Miami, and we'd like to keep it that way. With local media under siege, it's more important than ever for us to rally support behind funding our local journalism. You can help by participating in our "I Support" program, allowing us to keep offering readers access to our incisive coverage of local news, food and culture with no paywalls.
Make a one-time donation today for as little as $1.