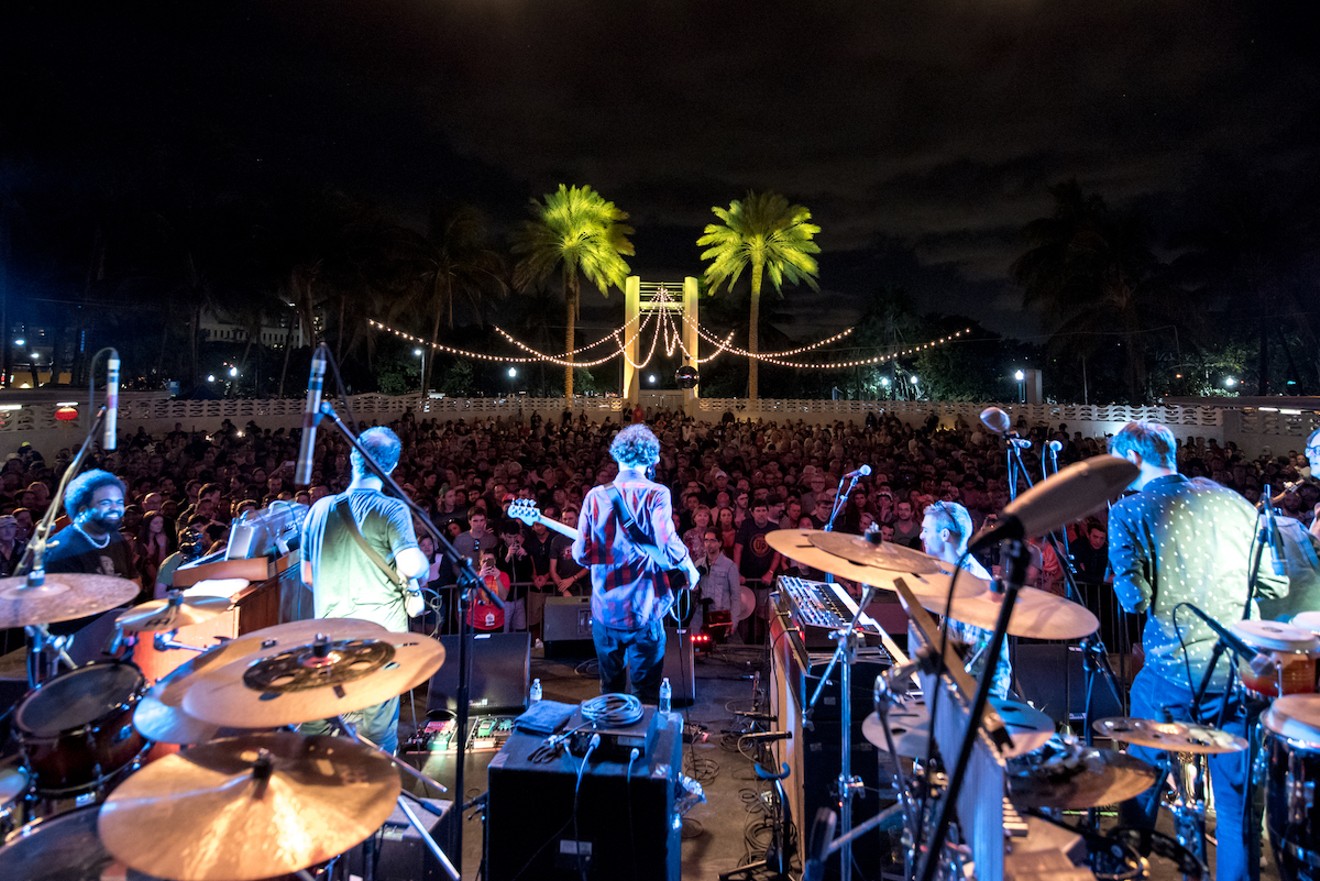 GroundUp Music Festival finally makes its return to the North Beach Bandshell. Photo by Stella K.
It has been more than two years since music fans last assembled at the North Beach Bandshell in Miami Beach to take in the eclectic sounds of the annual GroundUp Music Festival. It was February 2020, to be exact, less than a month before the concert industry commenced a long and dark hiatus owing to COVID-19.

GroundUp had been scheduled to return to the bandshell in February, but the emergence of the Omicron COVID-19 variant just prior to the new year moved festival organizers to postpone the event to the spring.

“I wasn’t really concerned that we would never be able to do it again,” festival cofounder Paul Lehr tells New Times over Zoom. “I was just a little frustrated, you know, having to do everything after it was already all set.”

Lehr and Snarky Puppy bandleader Michael League have been the masterminds behind the festival’s underdog success since the inaugural GroundUp Music Festival back in 2017. In a city known primarily for its dance-music scene, Lehr and League have consistently delivered diverse artist lineups of genre-stretching musicians from around the world — many of whom could be considered hidden gems within the vast depths of the music industry. This is perhaps the pair's secret to setting GroundUp apart in an oversaturated North American music festival market, as attendees are given the opportunity to see and hear artists who don’t usually appear at typical pop festivals.

“It’s more difficult because people don’t generally recognize the artists we have,” Lehr says. “But the way that we curate, we now have a reputation where people put their trust in us and understand what they’re going to get is something that will open their eyes. They’re going to discover new artists they’ve never heard of who are now their favorites in their playlists.”

"The artists are mingling with the audience in a way that gives them an opportunity to see a behind-the-curtain view of these musicians' artistry."

In addition to the performances across two stages at the bandshell, attendees will be treated to workshops and masterclasses with Moonchild, local samba percussion collective Miamibloco, and more artists yet to be announced. The weekend festivities will also include stripped-down acoustic sets and late-night shows at the Citadel in Miami’s Little River neighborhood.

“The idea is that at this festival, it’s not just about the things that happen on stage,” says League, who joined Lehr while on a brief break from a recording session. “The artists are mingling with the audience and engaging with them in a way that gives the audience an opportunity to see a behind-the-curtain view of these musicians’ artistry.

“These kinds of things, in general, offer a little more depth to people’s experience as festivalgoers instead of a standard festival experience which can sometimes put the music and the musicians second [behind] the party," League adds. "This is really about art and music but in an accessible way.”

That depth of unique entertainment programming and the wide-ranging roster of performers are the two primary forces behind GroundUp’s success as an independent festival. In December 2019, the New York Times featured GroundUp on its list of the "10 Definitive Moments" in jazz throughout the decade. Rock 'n' roll icon and 2017 GroundUp performer David Crosby once told New Times, “I don't think you'll get a better shot at hearing real music than at this festival.”

Lehr and League met back in 2016, when the former was CEO of the Miami-based National YoungArts Foundation.

“Mike was one of the master teachers who came in to do a masterclass, and basically, he was one of the most remarkable artists and humans I have ever met,” Lehr recalls. “The class that he gave was so exciting and phenomenal that when I left YoungArts, Mike and I decided to work together on GroundUp, and we hatched the idea for a festival.”

GroundUp Music Festival debuted in 2017 and has continued to grow ever since.
Photo by Rodrigo Simas
While presenting a festival was an idea League had been contemplating for some time, it wasn’t until he teamed up with Lehr that it blossomed into a feasible opportunity — though Miami wasn’t initially the Snarky Puppy multi-instrumentalist’s top choice for a location.

“Paul sold us on it and promised us it would be a good decision, and he’s been 100 percent right,” League admits. “It’s hard to imagine it being anywhere else now because the festival has largely taken the form of the space that we’re in Miami — the two are very connected. Basically, the short answer is that Paul pressured us, and we happily accepted spending February on the beach.”

“I didn’t pressure; I encouraged,” Lehr puts in, correcting his partner.

“What we did is we eliminated everything that we didn’t like about festivals and decided that we weren’t going to do that here,” Lehr says of their mindset when planning GroundUp. “We don’t have overlapping sets because we want people to be able to hear every piece of music. We’ve got everything curated. We’re keeping it small so people can move around and not be packed up against each other. The artists stay there all three days, which is very atypical. Normally an artist would come in, go to their trailer, do their set, go to their trailer, and leave. Now they’re all doing workshops and masterclasses and giving back to the community and hanging out with the fans, and so the barriers between artist and fans is broken down. We’ve tried to create a unique experience for the attendees and the artists as well — and so far, it seems pretty successful.”

While Lehr brings expertise in the business side of the industry, League brings the artist's perspective to the planning process.

League’s Grammy-winning collective Snarky Puppy has been the de facto house band of GroundUp every year since its inception. The band will once again perform all three nights in addition to a brunch acoustic set on the event’s second day. The group also plans to debut new original music for attendees throughout the weekend. Earlier this year, Snarky Puppy also released a compilation of live recordings performed during the festival in years past.

"We’ve tried to create a unique experience for the attendees and the artists as well."

“The whole idea is to put artists in a new context,” League told New Times in January 2020. “I tell all of the artists to use this festival as an excuse to do the thing that you’ve always wanted to do but have been too scared to.”

The pandemic forced League and Lehr to pivot and adapt in 2021. The festival went virtual — and overseas — taking place over three days last June in the small village of Prats, Spain, where League lives. The event was offered up free of charge to village residents and livestreamed for fans around the world to enjoy.

When Omicron delayed the festival’s return earlier this year, Lehr and League were thrown another obstacle to manage in the form of competing with the Miami Grand Prix, which takes place the same May weekend.

“When I had to postpone because of Omicron, the only dates that I could get was May. I thought, ‘Oh, great, everything will be less expensive and no big deal,’ and I was able to retain all the artists, not realizing it’s F1, and not realizing what a big deal Formula 1 is,” Lehr says of the rescheduling process. “So instead of being less expensive, everything is three times as expensive, and venues aren’t available. So it was frustrating, and next year we’re going back to our regular time in February.”

Despite the setbacks, the Miami Beach festival continues to thrive despite two years away and considerably fewer financial resources compared to the larger, mainstream pop festivals that dominate the industry. That seems to be just fine with Lehr, knowing GroundUp is building a solid reputation and gaining the kind respect within the fan and artist communities that can’t be bought with multimillion-dollar budgets.

“For us, and for me in particular, I don’t want to go and see the same lineup and be crowded in with other people and eat shitty fried food, you know,” Lehr notes of the event’s core ethos. “I want a different experience. What we’re trying to do is just think about what it is that would please our artists and our audience and create an experience where they come back every year, and they tell everybody.

“It is a very different experience,” he adds. “But people seem to be enjoying it and are attracted to it.”

GroundUp Music Festival. Friday, May 6, through Sunday, May 8, at the North Beach Bandshell, 7275 Collins Ave., Miami Beach; 305-672-5202; northbeachbandshell.com. Tickets cost $119 to $519 via groundupmusicfestival.com.
KEEP MIAMI NEW TIMES FREE... Since we started Miami New Times, it has been defined as the free, independent voice of Miami, and we'd like to keep it that way. With local media under siege, it's more important than ever for us to rally support behind funding our local journalism. You can help by participating in our "I Support" program, allowing us to keep offering readers access to our incisive coverage of local news, food and culture with no paywalls.
Make a one-time donation today for as little as $1.