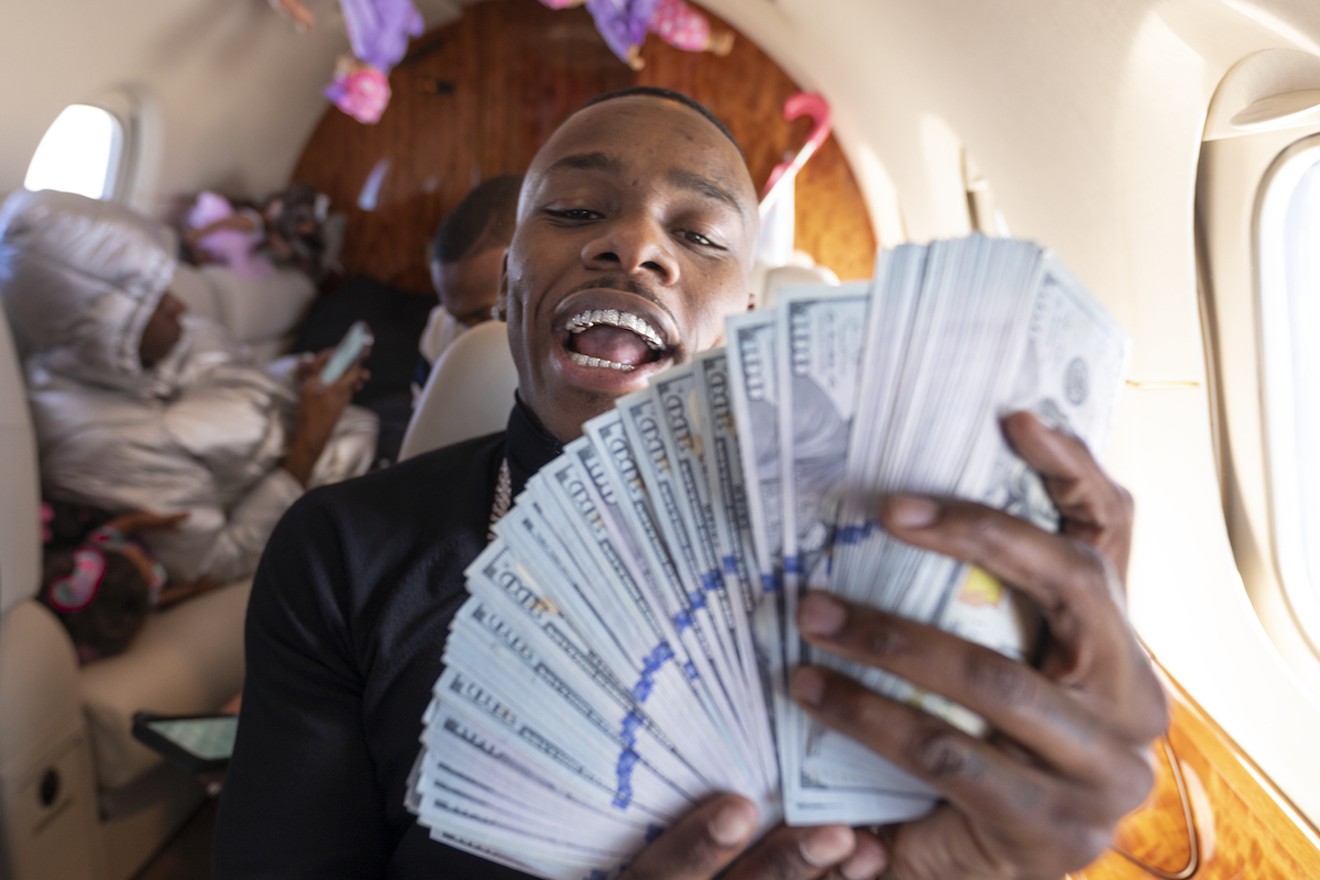 DaBaby Photo by Spicy Rico
If you’ve turned on the radio and tuned to a hip-hop station lately, you’re probably finding it hard not to hear DaBaby. The North Carolina rapper has been all over the place lately thanks to a fast-paced flow that demands attention, antics such as “satirical” Fresh Prince-themed music videos, and, uh, punching fans at his concerts. He’s the subject of several think pieces about the number of “baby”-named rappers in the rap ecosystem (Bhad Bhabie, Lil Baby, Big Baby Scumbag, etc.), his single “Suge” hit number seven on the Billboard Hot 100, and he's appeared on tracks with Megan Thee Stallion (“Cash Shit”) and Stunna4Vegas (“Ashley”).

The reason those three songs can be singled out isn’t just because they all contain a bit of DaBaby. It’s also because they are all examples of the latest trend in rap production: slow tempo; heavy, blown-out bass hits; and very little to no melody. It’s a style that can be recognized instantly but, at the moment, has no name.

DaBaby might be the biggest proponent of this style, but he’s not the one who started it. One could place the blame on producer and YouTube host Kenny Beats and rapper/comedian Zack Fox. Before achieving unintentional viral success earlier this year via the novelty tune “Jesus Is the One (I Got Depression),” the duo released “Square Up,” a tongue-in-cheek ode to brawling in public that contains plenty of that fat bass, along with some flatulent sound effects for good measure.

To understand the sound’s entrance into the hip-hop mainstream, however, we have to go to Texas. Much like the great pioneer, genius, and savant of music Soulja Boy invented a viral dance to achieve rap superstardom, a new generation of rappers — most of them Lone Star natives and all of them even more experienced with social media — are inventing dances such as "the Woah" and filming themselves for new-school video apps like TikTok and the dance-specific Triller. Most of these songs carry the same amelodic, bass-heavy production and lyrics that aren’t interesting enough to merit discussion. There’s “Dip” by TisaKorean and “Intro Pt. 2” by Splurge, and then there’s 10k.Caash, the self-proclaimed “creator of the Woah,” who released an entire mixtape full of songs made for the dance. Kenny Beats supplies production for several songs on the project.

The press has christened this scene and its associated sound as “dance rap,” but that label is a bit nebulous. All rap is dance rap when you get down to it. For this style, there’s a more apt name available: fart rap. That's because the bass sounds like a fart — a big, loud, wet fart that’s stupid and funny and hard to ignore when you hear it in a crowded room.

There’s more. Just as Thom Yorke once called the music industry’s relationship with streaming “the last desperate fart of a dying corpse,” so does fart rap feel like a culminating point for the past ten to 15 years or so of hip-hop, and especially the last three or four. Since the 2016 election, mainstream rap has gotten much moodier, angrier, and more nihilistic in response to the cultural malaise. We’ve witnessed both the emo-rap of Lil Peep and Juice Wrld and the extreme, blown-out style perfected by the South Florida scene. A direct line can, in fact, be drawn from a song such as Ski Mask the Slump God and XXXTentacion’s “Take a Step Back” to a 10k.Caash song such as "Swajjur Kicks" with Lil Yachty and Valee. All you have to do is lower the distortion on the bass, brighten the lyrics, and tone down the screaming.

But the change isn’t a constructive one. It’s hard to consider fart rap any kind of fun. It might be because it’s basically designed to be heard while striking poses and mugging for the camera on Triller, meaning there’s a self-promotional aspect inherent in it that elicits deep cynicism. Or it could be that it's not as emotional as the other styles, that it doesn't appeal to our sense of rage like XXX or to our melancholy like Peep. But more than all of that, fart rap isn’t really fun to listen to because the most important part of any enjoyable song — the melody — has been eliminated.

Even in the most prototypical “dance rap” song — Soulja Boy’s “Crank Dat” — those five steel-drum notes probably come to mind right now. That’s what made the single a hit. It would be hard to find anything that memorable or compelling in a DaBaby cut. It's not that the music is bad or good; it's that it's inert and bereft of feeling.

This kind of dynamic happened once before in another genre. In the beginning of the 20th Century, classical music began a similar shift, moving away from the intense, passionate style of romanticism (Wagner, Mahler) and impressionism (Debussy, Ravel) and toward a modern style that sought to break the existing rules of music-making. Stravinsky did away with conventional rhythm and consonance in The Rite of Spring, while Schoenberg experimented with atonal music. Audiences reacted by abandoning classical music for jazz.

It’s hard to imagine a similar shift happening today, mostly because hip-hop is the pop genre of the moment and there’s nothing on the horizon ready to replace it. But it’s difficult to shake the feeling that we can do better than where we are now. It’s also hard to imagine fart rap lasting much longer as a trend, but whatever comes along to replace will sound (and smell) much sweeter.

DaBaby. With Lil Durk and NLE Choppa. 6 p.m. Friday, September 27, at Watsco Center, 1245 Dauer Dr., Coral Gables; 305-284-8244; watscocenter.com. Tickets cost $55 to $80 via ticketmaster.com.
KEEP MIAMI NEW TIMES FREE... Since we started Miami New Times, it has been defined as the free, independent voice of Miami, and we'd like to keep it that way. With local media under siege, it's more important than ever for us to rally support behind funding our local journalism. You can help by participating in our "I Support" program, allowing us to keep offering readers access to our incisive coverage of local news, food and culture with no paywalls.
Make a one-time donation today for as little as $1.