Jolt Radio Moves to a Larger Studio Space in Allapattah A look at Jolt Radio's new digs Photo by Mark Vonderosten
Though it only moved a few buildings down from its previous location in NW Seventh Avenue in Allapattah, Jolt Radio's new space makes all the difference in the world to the internet radio station's founder John Caignet.

"It was time for a bigger space," he tells New Times. "At the old studio, I was working with 265 square feet, which is nothing. Now I have 1,265 square feet, so it's quadrupled in size."

It's not the first time Caignet has had to move Jolt Radio since the nonprofit station went on air in 2009 as a means to broadcast local, national, and international independent artists and producers.

"We started out by Tamiami Airport in 2009," he explains. "The suburbs were a bummer, though. It was too far from the excitement, so we moved to Wynwood when it was still a little desolate. We were across the street from where [Wood Tavern] was. I think we got there right when the Wynwood Walls were getting started, but then my rent went up 75 percent, so we moved to Allapattah."

"We had a grand opening during Art Basel, and the place was packed," he adds. "Twenty DJ's played and the Little River flea market filled the space with vendors. We had local businesses selling pizzas, chicken sandwiches, and brews."

With a larger space at the station's disposal, Caignet hopes Jolt Radio can make itself more open to the public and host events regularly.

"It's much more conducive for hanging out. It's not just a radio booth anymore," Caignet says. "On January 28, we're going to screen music documentaries and have popcorn and drinks. I want to have a lot of music community-oriented events. Since there are almost no music venues, a lot of kids in Miami are stuck playing their music only in garages. I'm hoping we can record locals playing sessions, and a few people can come out to watch them." 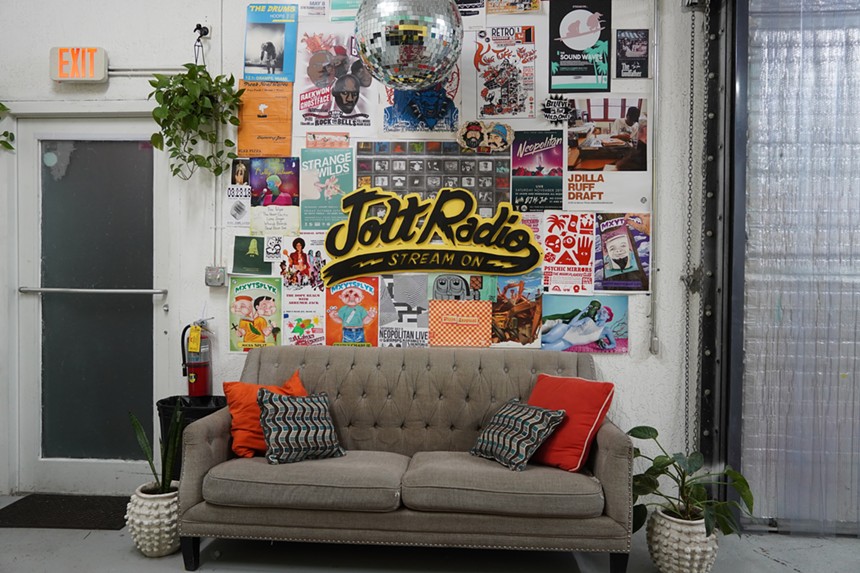 Jolt Radio moved to a larger space on NW Seventh Street in Allapattah.
Photo by Mark Vonderosten
Caignet has been active in finding other businesses to share the new building.

"Miami Audio Solutions, which repairs and keeps all the local nightclubs' audio equipment up to date, is here. My brother Pedro runs his Veridian Club Studios here, which is a recording studio with all kinds of vintage synths," he says.

Also in the building is Buena Onda, an '80s lifestyle boutique. "He sells everything from the '80s: cassettes, boomboxes, clothing, VCR tapes," Caignet adds.

As far as the actual radio station, Jolt has various monthly and biweekly shows in the pipeline, according to Caignet.

"We're getting ready to launch a ton of new shows. Timothy Schmand is doing his Miami Borderland Chronicles, a show that focuses on the forgotten history of Miami. He brings in all these cool historians, like the head of the board of the Miami River, to teach us all these things about our city we have no idea about."

Also on the docket is Storytime with Luis, where host Luis Garcia recounts a true South Florida story every third Wednesday of the month. Caignet will host Behind the Bodega, showcasing all the records that have been moving him and that he thinks will move everyone else.

Jolt Radio. 3442 NW Seventh Ave., Miami; joltradio.org.
KEEP MIAMI NEW TIMES FREE... Since we started Miami New Times, it has been defined as the free, independent voice of Miami, and we'd like to keep it that way. With local media under siege, it's more important than ever for us to rally support behind funding our local journalism. You can help by participating in our "I Support" program, allowing us to keep offering readers access to our incisive coverage of local news, food and culture with no paywalls.
Make a one-time donation today for as little as $1.