Latin Pop Group Piso 21 Grows Up in the Spotlight 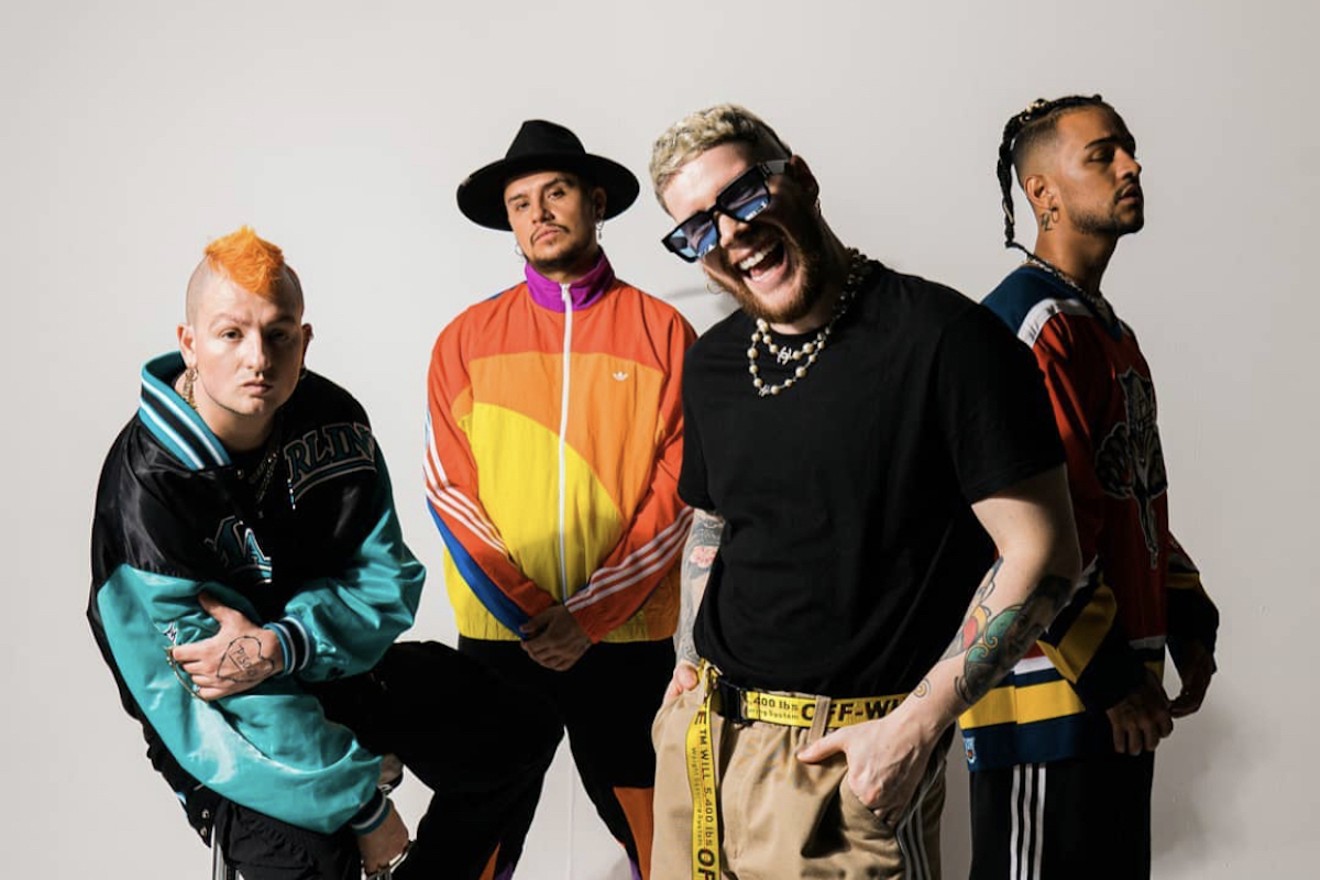 Piso 21 Photo by Federico Gomez Morales/@falcocultum
Pablo Mejía (AKA Pablito), David Lorduy Hernández (AKA Lorduy), and Juan David Huerta (AKA el profe) of Piso 21 are in the back of a tour bus parked outside the Bogotá studios where El Factor X, the Colombian edition of the X Factor, is being filmed.

Always stylish, Pablito is sporting a low blond buzz cut paired with black attire and a blue facemask dangling from his ear. A heart-shaped tattoo with “Piso 21” in the center peeks out from his right hand, where he's holding his phone. Just as swaggy, Lourdy and el profe look as though they just came out of a reggaeton music video sporting Adidas, fedoras, and sunglasses.

On this Thursday afternoon, the Colombian pop group is making time for press between shoots for the reality show, for which the quartet is serving as judges. The group's fourth member, David Escobar (AKA Dim), couldn’t make it to this interview owing to scheduling conflicts.

“Our experience on X Factor has been awesome. We’ve learned a lot from these artists, and they learned a lot from us,” Lourdy says over Zoom. “We try to implement some of the groundwork we’ve used in our careers so that they have some sort of tools to work with.”

It has been about 13 years since Piso 21 burst onto the scene with schmaltzy teenage love songs like “Correr el Riesgo” and “Déjame.” Since then, the group has worked with Maluma, Zion & Lennox, Black Eyed Peas, and Christian Nodal.

With each of those collaborations, the guys have pushed the envelope on the public’s perception of what a boy band should look and sound like, and most recently, they have taken the urban-pop route.

When the group started out, Piso 21's direction was set by label executives who were looking for a surefire hit.

"I think our maturity has been notorious. We started as kids and everything from our sound to our style has changed,” Pablito says. “At first it felt like our music was just made up of different references, and it wasn’t our own sound. When we first started, the music industry wasn’t signing anyone, and people were heavily stealing music through piracy. But there was still a way to keep going because there were shows we could play at."
After all the growing pains of being novices, Pablito feels like Latin music has gone through a huge seismic shift since the group's early days.

“I feel like the Latin music scene is at its best than it ever has been,” he ventures. “It’s such a special moment that we’re living in for Latin music in Spanish. And we’re out here taking over to bring Latin music to the whole world.”

For Piso 21, that takeover includes being able to cross over into singing in English and collaborate with artists like the Weeknd.

Until then, the hits the guys are making in Spanish suffice. There’s the latest single with Maluma, “Mas de la Una,” a love story gone wrong. It’s relatable, inevitable, and simultaneously catchy.

“It’s like when you really like a person, and you’ve broken their heart, and you call them after 1 a.m., and they don’t answer,” Lourdy explains.

“We all have gone through that,” Pablito adds.

Next year, Piso 21 is looking forward to releasing a new album, El Amor en los Tiempos del Perreo, which the guys hope to drop during the first quarter. They're pretty optimistic about the album cycle going on as planned.

“We’re also hoping for lots of vaccines, good health, lots of music and concerts,” el profe says. “And, you know, it’s 2021, and we all know it’s going to be Piso 21’s year.”
KEEP MIAMI NEW TIMES FREE... Since we started Miami New Times, it has been defined as the free, independent voice of Miami, and we'd like to keep it that way. With local media under siege, it's more important than ever for us to rally support behind funding our local journalism. You can help by participating in our "I Support" program, allowing us to keep offering readers access to our incisive coverage of local news, food and culture with no paywalls.
Make a one-time donation today for as little as $1.