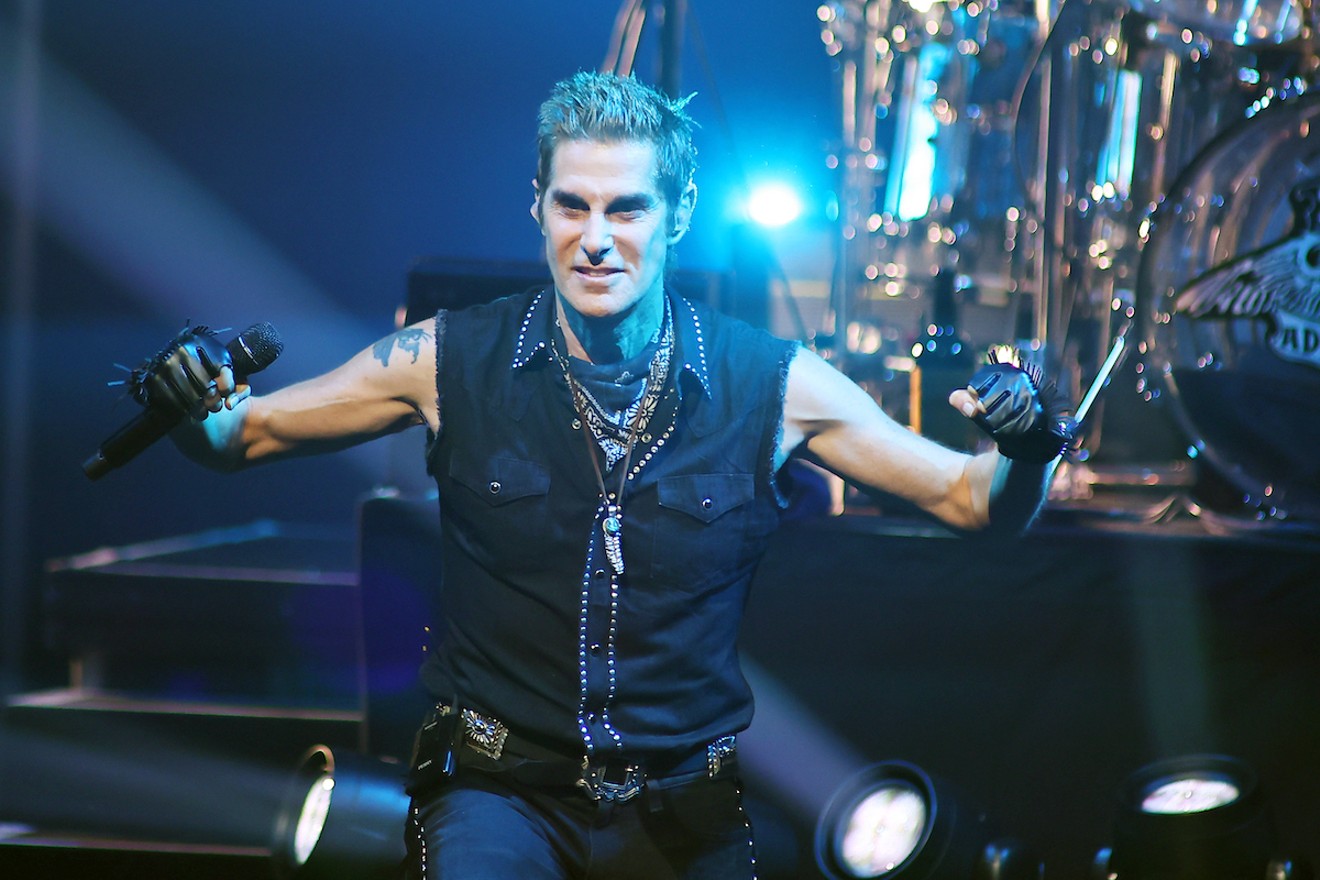 Perry Farrell performs with Jane's Addiction at Hard Rock Live. Photo courtesy of Seminole Hard Rock Hotel & Casino Hollywood
On a Saturday night, thousands showed up to Hard Rock Live in Hollywood to relive their youth. On stage was Jane's Addiction belting out its late '80s and early '90s timeless alternative rock classics. The guitar work was ferocious, and the drums and bass kept the audience hypnotized.

Still, the biggest draw for Jane's Addiction continues to be frontman Perry Farrell.

One part charismatic shaman, one part a kinetic force of nature, on this particular night, Farrell's voice was a bit strained, but nobody in the crowd minded in the slightest. Clad in a black sleeveless shirt and pants, Farrell left it all on stage. This was a special night for him. While Jane's Addiction might be synonymous with Southern California, where the band started, Farrell's formative years were spent in South Florida. Or, as he put it that night before belting the chaotic ode to kleptomania, "Been Caught Stealing," "I had a great time in Los Angeles, but I never forgot you all. Where do you think I learned to steal? Right here."

Before there was Jane's Addiction, and before there was Lollapalooza, there was Peretz Bernstein, a kid born in New York City and obsessed with all the pop and rock music he listened to on the radio.

"You can imagine early '60s pop, and I can not only sing all the songs, but I can do all the dances too — the Jerk, the Hully Gully, the Fruit, the Monkey. I can do all those dances, and I can mix up a good cocktail too," Farrell tells New Times the day before the show at the Hard Rock. "My big brother and sister would let me be the bartender and sometimes entertain their friends when they had a make-out party in the basement in Queens."

In the early '70s, shortly after Farrell's bar mitzvah, he moved with his father down to South Florida, where he attended North Miami Beach High School. While he learned to surf, he continued his music fandom.

"I fell in love with everyone from Bob Dylan to Led Zeppelin to Lynyrd Skynyrd," he says. "When disco came in, I got myself a second-hand leisure suit. I can still remember: It was like a brown polyester leisure suit. You needed a suit like that if you wanted to go to the discos. My dad had a private membership card that he'd lend me, and we'd go to the clubs."

A teenage Farrell would do whatever it took to get his music fix, including climbing up to the second story of a Miami Beach venue to sneak in.

"We'd scale up on the water tray up to the second floor. If one guy could get up there, then he would go down and unlock the back, and everyone else would come running in, so I got to see all the concerts that came through," Farrell explains. "I was asking girls to go to concerts on the weekends. In those days, it was Lynyrd Skynyrd, the Cars, Blondie. It was punk rock. Music was so important to us."

If there was one South Florida band that really inspired Farrell, it was Critical Mass, who in 1978 became the first punk band to press a record in Miami. Still, Farrell was more impressed with the band's cover of Lynyrd Skynyrd's "Freebird."

"If you could play 'Freebird,' you were hired for every party that weekend," Farrell says. "The lead singer was this big fat kid who was just this amazing guitar player. Their big song, the highlight of the night, was when they busted out 'Freebird.'"

While Jane's Addiction might be synonymous with Southern California, Perry Farrell's formative years were spent in South Florida.
Photo courtesy of Seminole Hard Rock Hotel & Casino Hollywood
A love for classic rock covers bled into Jane's Addiction repertoire, with the band putting its unique spin on Grateful Dead's "Ripple," the Rolling Stones' "Sympathy for the Devil," and the Velvet Underground's "Rock 'n' Roll." But as a teenager, Farrell had no clue he could ever be a rock star. He did, however, know that he wanted something more — something different.

"I actually took a Greyhound bus out to California from Florida right after graduation," he says. "When I got out to California, I had no idea I'd be in a band. I just knew that I loved music. We all loved music. I was kind of a wanderer, as I tell you. I didn't have much of a plan. I wanted to come to California because I knew the waves were bigger than they were in Florida."

It took a few years in California before Farrell found himself as the lead singer in Jane's Addiction. Paired with guitarist Dave Navarro, drummer Stephen Perkins, and bassist Eric Avery, Jane's Addiction, along with the Red Hot Chili Peppers and Fishbone, provided a funk-based, grimier Southern California alternative to the polished glam rock of Mötley Crüe and hard rock of Guns N' Roses that was dominating the charts.

Farrell mined his past to find the inspiration for his lyrics. He says he has a photographic memory of exactly what he was thinking when he wrote each one of those classic songs more than 30 years ago.

The lyrics for the epic "Ocean Size," off the band's 1988 album Nothing's Shocking, were inspired by Farrell's love for the sea that was first nurtured in Florida. "You look at the ocean and how much I love the ocean. Back in those days how much I wanted to protect the ocean, so I wrote 'Ocean Size.' The ocean is so big, so wise. I want to be as great as the ocean, and when I come to Florida, I get a chance to sing those songs to my high-school friends. I try to write songs where the subject matter is timeless."

Sure enough, Saturday night at Hard Rock, Jane's Addiction finished its set with "Ocean Size," the only night on the tour where it performed the song. Farrell seemed to have a truly great time on stage that night. As he pointed at and called out his childhood friend Kenny and reminisced about driving up on weekends to catch big waves in Sebastian Inlet, he was reveling in being the local boy who made good. "I never thought a kid like me would be up here. I left here with nothing but a surfboard and art supplies," he told the crowd.

But make it big Jane's Addiction did, and just as the band was at its critical and commercial peak, Farrell decided to disband in 1991. He attributes the decision to the same wandering spirit that had him leave Florida all those years before. 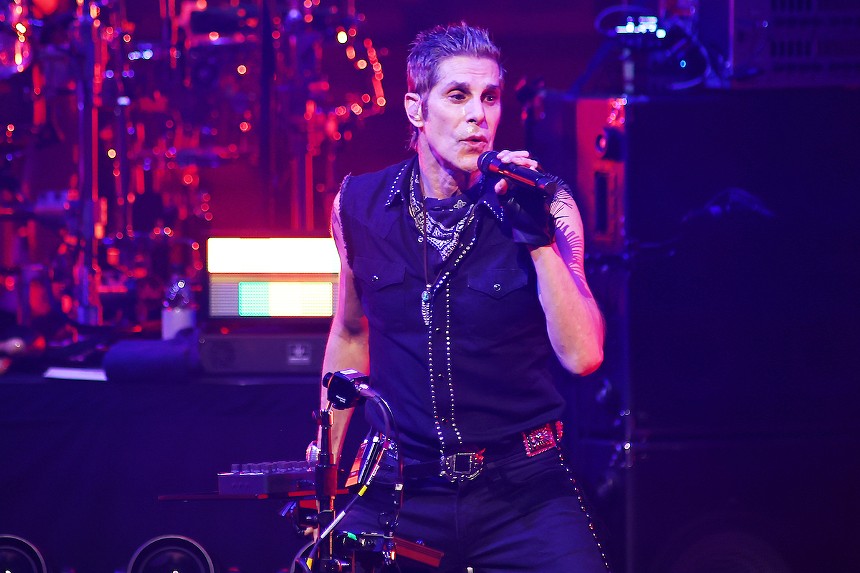 Perry Farrell attended North Miami Beach High School in the early '70s.
Photo courtesy of Seminole Hard Rock Hotel & Casino Hollywood
"You could say I was a fool. If you look at it purely from that point of view, I really had something good going on here. If it was only about the money, then yeah, I was definitely a fool," Farrell says. "We ended Jane's Addiction seemingly at our height. The reason I broke up Jane's was because artistically, and as a man, I needed more. I wasn't ready to be some rich guy sitting on a couch, not taking any chances anymore and repeating myself because I had this guaranteed recipe almost. To me, it's boring to live life that way."

"I was transforming, and I'm still transforming. We're all constantly transforming, and that transformation shows up in the music," Farrell notes. "It shows up in the lyrics, and I still have a lot more transforming to do." He adds that doesn't mean he can't look back, which these lucrative reunion tours allow him to do. "It's beautiful to be able to get up there now and sing my songs and know that people know them and can sing along to them, and it's become a part of their life. They can remember where they were when the record came out and how it sang to them."

"I'm writing a lot more about things I've learned recently, what kind of man I'm becoming," he says. "They are a lot more electronic in their composition, in their arrangement. I use a lot more modern instruments, synthesizers. I love what's happened in dance in the last 20 years. I love what dance has done for the world. It is a culture all its own that is constantly changing."

When I show appreciation for how much Farrell's music has meant to his fans over the last 30-plus years, Farrell expresses gratitude for the flattery while also acknowledging how much things have changed for him since he was a boy going to North Miami Beach High, surfing, and sneaking into shows.

"Whenever anyone comes up to me and says, 'You've helped me. You helped me when I was in college, and I was that awkward kid,' I feel great because you know I, too, was that awkward kid," he says.
KEEP MIAMI NEW TIMES FREE... Since we started Miami New Times, it has been defined as the free, independent voice of Miami, and we'd like to keep it that way. With local media under siege, it's more important than ever for us to rally support behind funding our local journalism. You can help by participating in our "I Support" program, allowing us to keep offering readers access to our incisive coverage of local news, food and culture with no paywalls.
Make a one-time donation today for as little as $1.