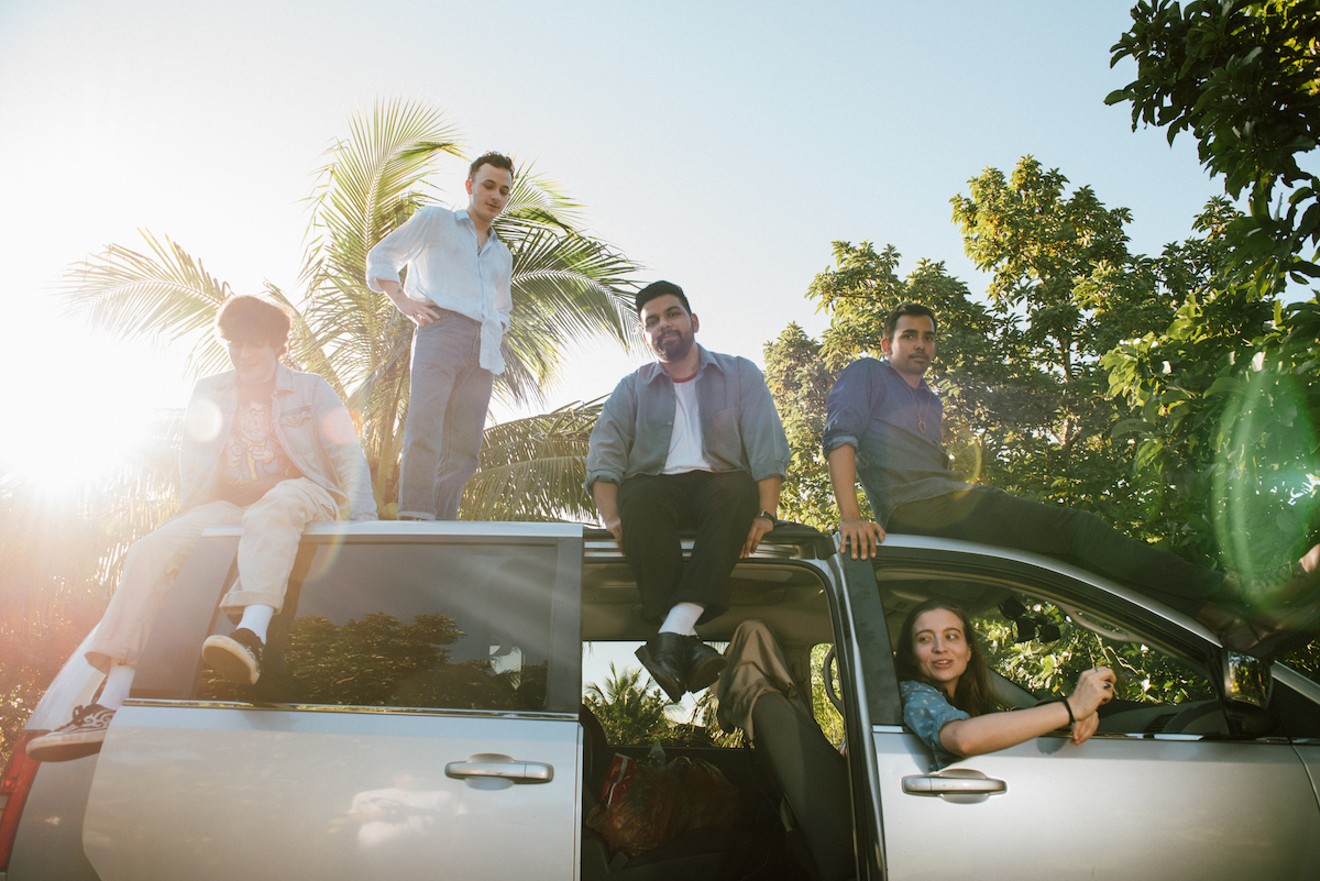 Stillblue's influences come from all genres and all parts of the world. Photo by Steph Estrada
Tightly packed onto a futon and spilling over onto rolling chairs in their Hialeah practice space, the members of Stillblue look like siblings. The seating arrangement is an attempt to squeeze into the frame of a video call, but the familial vibe isn't coincidental. For drummer and most recent addition Diego Gamez, the atmosphere is what drew him in.

"It showed me a completely different side of life," Gamez says. "I was able to play with people I was still meeting and learning about, and they were open enough to come over to my place and have drinks after a show or something, and it just bonded us. These are like my brothers and sister."

Before the current five members found one another, Stillblue lived inside singer and guitarist Enrique Rosell's head. Although he played in a few high-school bands and then performed as a solo artist, entirely devoting himself to music was challenging, to say the least. Writing, recording, and performing alone, his music felt incomplete. His parents, Peruvian immigrants, urged him to find a stable source of income. As soon as he graduated and secured a job in August 2019, he put up flyers around the Florida International University campus.

"I was like, OK, no more bullshit. Let's actually do this," he says.

Soon after, Rosell assembled Stillblue, although apart from Danny Estrada, none of the members of that first iteration stuck around.

"I'm one of the original members of Stillblue. I take pride in that," he says with a laugh.

Estrada humbly describes himself as the band's lap steel guitarist, but the oddly played instrument is a defining feature of most of Stillblue's songs. It infuses the band's folky guitar melodies with an otherworldly cry that almost acts as a second — or, in some cases, third — vocalist.

"I bought a lap steel because I was like, Fuck it, I'm going to learn how to do this," Rosell says. "I brought it over, and Danny tried it. Danny's a virtuoso. He's just a really talented musician. He picked it up super easily."
Along with the ethereal sounds of the lap steel and Rosell's vocals, a Stillblue song usually comes with a helping of Sofia Soriano's backing vocals. Resting a Daphne blue Telecaster against her leg, Soriano strums the folky body of the band's songs.

"I genuinely love old-school country music, which confuses my parents so much," Soriano says of her influences.

She joined the band soon after meeting Enrique at a Halloween-themed open-mike event and bonding over Soriano's Phoebe Bridgers costume. As important as her guitar contributions are her vocals, which add rich contrast to Rosell's voice. 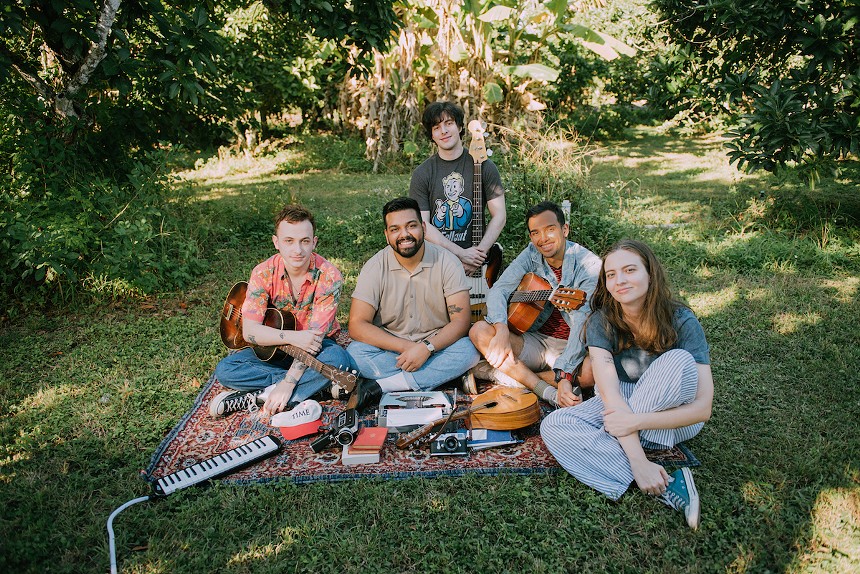 Stillblue will embark on a tour with the Polar Boys in September.
Photo by Steph Estrada
If Rosell sounds like a creek whispering somewhere in the Pacific Northwest, Soriano is a fern that sits along the bank — solid and confident in her vulnerability. In "Kick to the Chest," where she's aching from failure and still lending a reassuring hand, her offer is firm: "I'll be here as long as you need/Let's be clear, I'm what I fear."

A love for Phoebe Bridgers and the New Jersey-based indie rock group Pinegrove are two common threads that bind the band together, although their influences come from all genres and all parts of the world.

"Yamil loves this Japanese band called Fishmans, and they're crazy. They sound nothing like Stillblue. But their sound and song composition sounds so different and cool," Gamez says.

Subtle but vital to Stillblue's unique sound, Yamil Granda's basslines reflect his personality. He jumps in here or there, and while his comments are quiet, he is always synced in with the band's collective consciousness.

Finalizing the last two songs on an EP set to be released at the end of the month, there is a completeness in the air and comfort in the band's ability to collaborate in person after the pandemic loomed over its formation, frequently creating obstacles. Singles "Bluets," "Kick to the Chest," and "Song to Say Goodbye To" were completed remotely, with Estrada, Rosell, and Soriano video calling and exchanging audio files to bring the tracks together.

Unlike the tempo of its songs, Stillblue shows no signs of slowing. The band began performing live shows in January, playing everything from house shows in Coconut Grove to packed rooms at indie hotbed Gramps. The members recently announced they'll join South Florida natives the Polar Boys on a tour in September, including shows in Orlando, Atlanta, and Nashville.

"I think about it too much. I cannot explain to you the levels of happiness in my head," Rosell says. "Because it's not just a three-year-long journey that we've been on. It's like a lifelong journey to get to this point."
KEEP MIAMI NEW TIMES FREE... Since we started Miami New Times, it has been defined as the free, independent voice of Miami, and we'd like to keep it that way. With local media under siege, it's more important than ever for us to rally support behind funding our local journalism. You can help by participating in our "I Support" program, allowing us to keep offering readers access to our incisive coverage of local news, food and culture with no paywalls.
Make a one-time donation today for as little as $1.