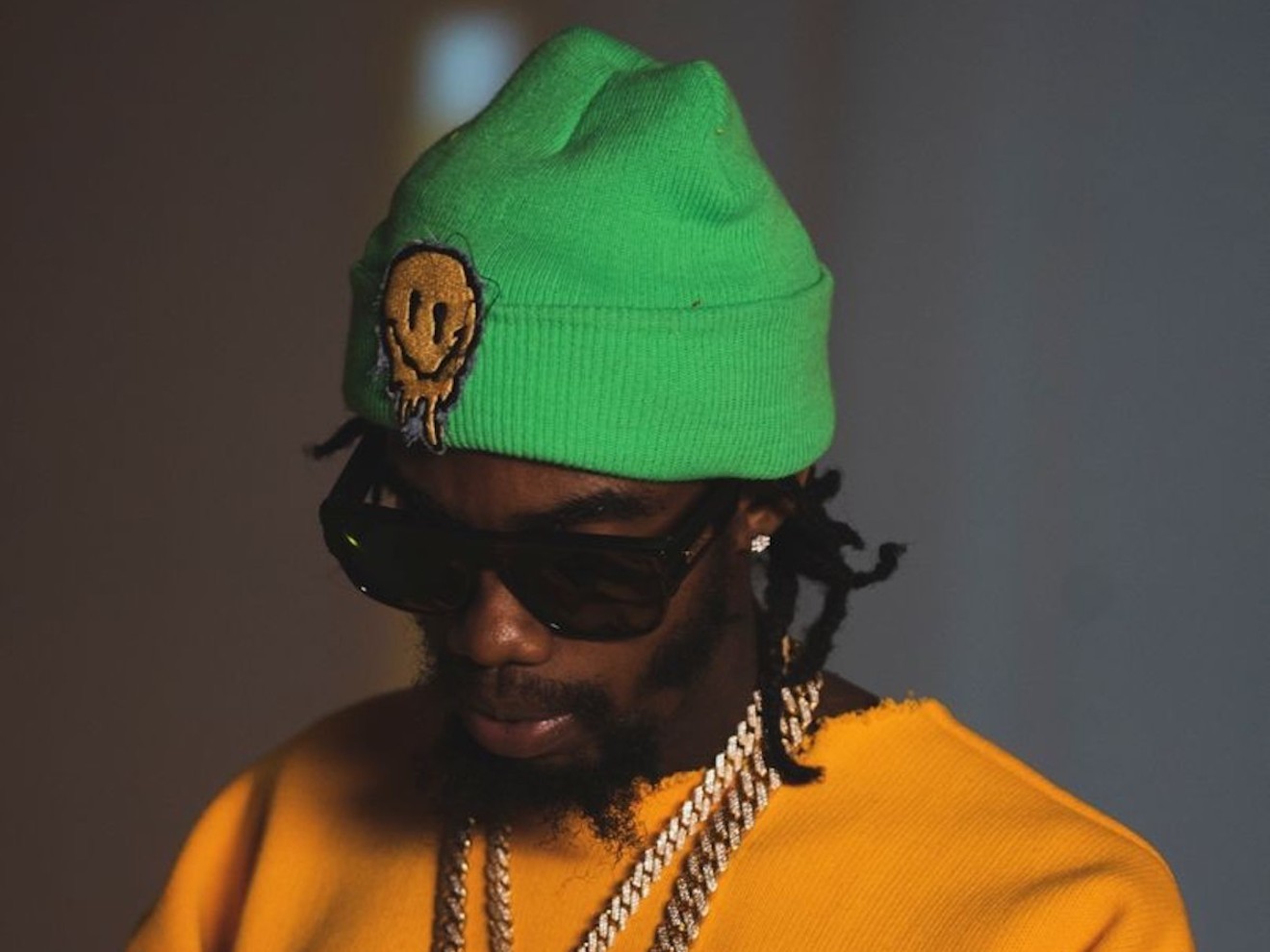 Alkaline's sophomore album Top Prize follows the precedent he set with his debut album by dominating global charts. Photo by Keino Douglas
There’s no denying Alkaline has cemented a spot among dancehall’s upper echelon. At just 27 years old, he has spent a decade in the industry and is a force to be reckoned with.

As much as he can afford to coast his way to stardom, he’s chosen evolution over a linear path. From his fledgling days as an anomaly in the industry until now, the Kingston-born artist has fended off speculation about his rise to fame — and sometimes stirred it.

On a cloudy Sunday evening in Fort Lauderdale, Alkaline (born Earlan Bartley) lights a spliff in his secluded studio. The earthy smell of smoke and lighthearted banter between him and his engineer commingle, escaping the room and drifting down the hall.

Entering the private studio, Alkaline has already started digging into his archives to begin recording new music. He opens a matte-black door to reveal a quaint booth with a lone microphone in the middle.

“This is where the magic happens,” he says.

In person, he’s tall but not intimidating, charming but not cocky. He chooses to keep his shades on because with a cameraman present he can’t be caught embodying anything less than “cool.” He flashes a pearly grin, sits back on his couch, and clarifies, “I’m ready when you are.”

His arrival on the music scene was pegged as unconventional, even for a genre that amplifies expression. Between his controversial physical appearance (Alkaline bleached his skin at the outset of his career but stopped around 2017) and back-to-back hit songs, some were perplexed, others hooked.

The release of his debut album, New Level Unlocked, in 2016, showed him to be more than a flash in the pan. The album debuted atop Billboard’s Reggae Albums Chart, making Alkaline the first dancehall artist to achieve that feat since Shaggy’s 2011 EP, Summer in Kingston. In that same year, the album landed at the number-three spot on Billboard’s “10 Best Reggae Albums of 2016.” Hits like “Champion Boy,” “City,” and “One More Time” turned skeptical spectators into loyal fans.

Five years later, the momentum hasn’t ceased. On May 14, Alkaline dropped his ambitious follow-up, the aptly titled Top Prize. The 14-track album employs his signature shapeshifting vocal inflections and electric rhythms. But this time around, he’s traded the façade for authenticity.

“It falls from an honest place as far as the timing and everything,” he tells New Times. “With the pandemic right now, it’s like a time where everybody has to rise to the occasion. We have to go out there and go for the top prize.”
Top Prize depicts Alkaline in all his layers. He dangles his success in front of naysayers on “Ocean Wave” (“Me father get lay off no have no work/Did haffi tun a man from deh so/Now me life sweet like doughnut.") He puffs his chest on “Cree” and “Maniac,” where a ghoulish beat underscores warning shots. He seduces the ladies on effervescent tracks like “Hostage” and “Twerc.”

Following the precedent he set with his debut, Top Prize climbed to the number-one spot on the iTunes reggae charts and peaked at number six on Apple’s worldwide charts, sharing the top ten with J.Cole and Nicki Minaj who dominated at the number one and two spots, respectively. He also made history as the only independent reggae-dancehall artist to have two consecutive top-charting albums.

“Top Prize is whatever goal you want to achieve,” he says. “It’s rising and exceeding expectations. And just enjoy the whole process, the whole journey,” he adds.

On the album’s title track, he recalls the doubt projected on him during his earlier days: “Been around it/Shed some tears, too/Me nah guh ‘round it,” he sings before finding resolve in his accomplishments. “And dem think we woulda fail but wi tek off/Just like di space rocket inna di breeze a suh wi jet off,” he proclaims over a breezy cadence.

“Everyone goes through challenges and difficulties,” he explains. “That just a part of it. One just have to be determined. Stay focus and believe in himself.”

That self-determination has led to a global impact in reggae and dancehall. Recently, Alkaline was the first Caribbean artist to perform on Audiomack’s Fine Tune acoustic series, after his album amassed 10 million streams and became the number-one trending album on the streaming platform. His performance has garnered over half a million views since it was released on YouTube a few weeks ago. Spotify also wanted in on his undeniable streak and made him the face of its first Caribbean playlist, “Back a Yard.”

As much as he’s had to push back against critique, warranted and unwarranted, Alkaline hasn’t let his prevailing pattern redefine his values. In contrast to the braggadocious crooner portrayed in his songs, he’s mellow and introverted. Instead of elbowing himself into reggae’s who's who, he prefers family time and channeling his athletic days in occasional afternoon games of Jamaican football.

In short, he’s grateful for where he’s landed. And when asked how he would describe his personality outside of music, he shrugs and chuckles before retorting with a fitting epiphany: “Me ah just me.”

For Alkaline, it seems, being able to preserve his identity has become the true top prize.
KEEP MIAMI NEW TIMES FREE... Since we started Miami New Times, it has been defined as the free, independent voice of Miami, and we'd like to keep it that way. With local media under siege, it's more important than ever for us to rally support behind funding our local journalism. You can help by participating in our "I Support" program, allowing us to keep offering readers access to our incisive coverage of local news, food and culture with no paywalls.
Make a one-time donation today for as little as $1.