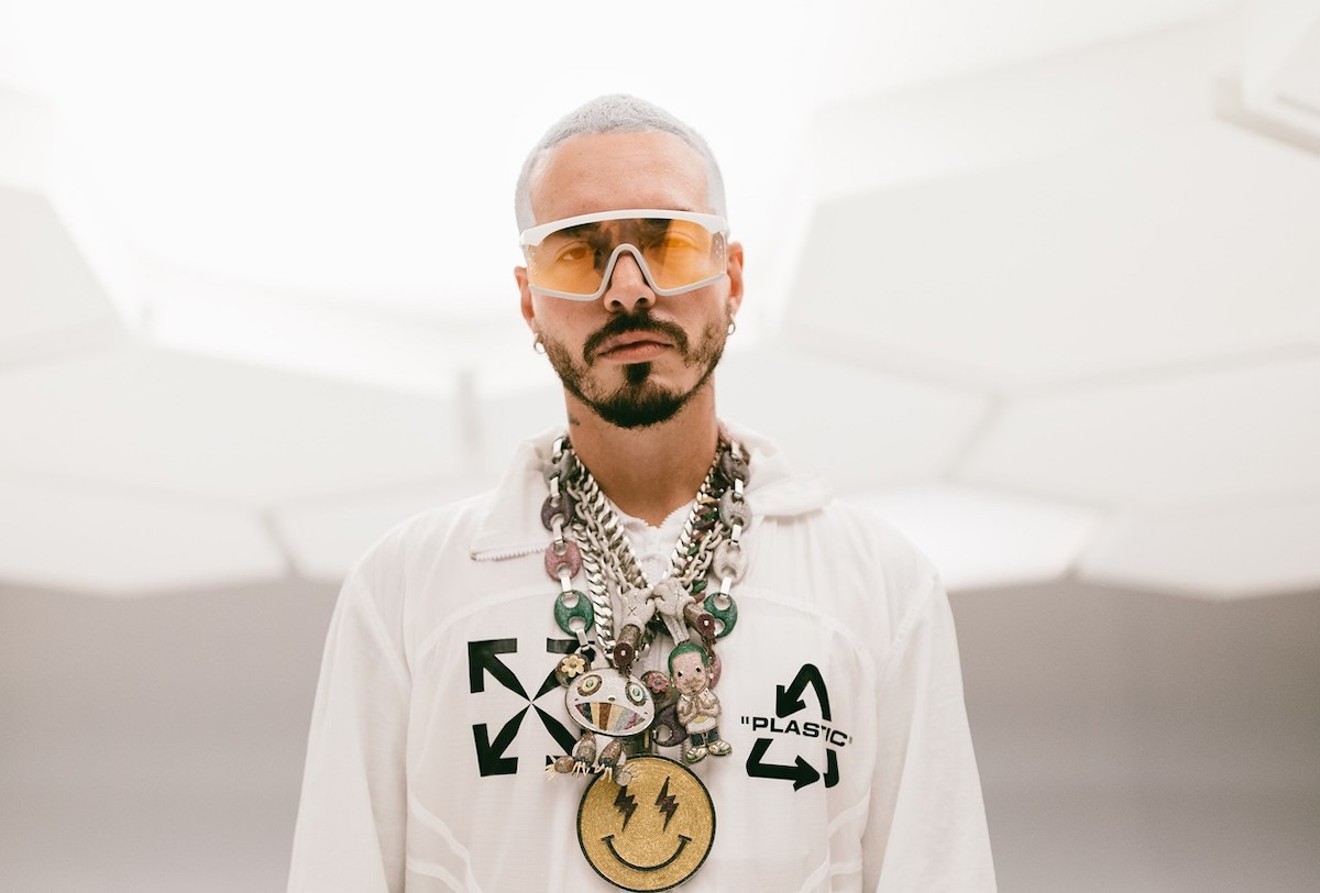 J Balvin leads the Latin music boom. Photo by Albert Piedrahita
"I've loved music ever since I was a little kid. I loved listening to it, singing, dancing... I've just always had a great connection with music. Always," J Balvin shares.

As a young boy in the foothills of Medellín, Colombia, the recording artist born José Osorio found joy in the simple things. And his tendency toward music foreshadowed the direction his life would eventually take.

He has since grown into the global superstar known as J Balvin. As one of the leading figures behind the second "Latin boom" in the United States, he has been instrumental in bringing Latin artists and reggaeton music to the forefront of American pop culture. Now he's enjoying a victory lap with the release of his latest album, Colores, due out Friday, March 20.

"I always thought that I would have a future in music," Balvin says. "I knew it up until the moment in my life when I finally said, 'OK, this is going to be the path that I'm going to choose for myself' so I could move forward, help my family, and make my dream a reality."
In the mid-2000s, Balvin moved back to his native Medellín and began to pursue music seriously. He became interested in reggaeton after watching the rise of Puerto Rican pioneer Daddy Yankee, whose 2004 album, Barrio Fino, would go on to become the best-selling Latin music album of the decade. "I was such a fan that I was copying his style, the way he moved onstage, his flows, his raps," Balvin told the New York Times in 2016. After "Gasolina" became reggaeton's first worldwide hit and Puerto Rican acts such as Wisin y Yandel, Tego Calderón, and Don Omar made moves to follow Yankee's footsteps, Balvin channeled the energy and excitement of the moment to launch his own reggaeton career in Colombia the following year.

Balvin — then performing as J Balvin "El Negocio" — released his debut single, "Ella Me Cautivó," in 2005. The tropical reggaeton track was the first single from his debut album, 2009's Real, which went on to achieve gold certification from the RIAA. He continued to find fame in Colombia with singles such as "En Lo Oscuro" and "Como un Animal," eventually used his "El Negocio" stage name as an album title, and scored his first international hit in 2012 with the one-night-stand anthem "Yo Te Lo Dije."
After he netted several number one records on the U.S. Latin charts and snatched the Latin Grammy for Best Urban Artist in 2015, the release of Energía in 2016 proved to be Balvin's major breakthrough. Chart-topping singles such as "Ginza" and the Pharrell collab "Safari" thrust him to the front of the new pack of reggaeton artists working to restore the urban genre's glory in the States. The wild success of "Despacito" the following year made clear that the second Latin boom had arrived, and J Balvin was one of the names on everyone's lips. "Mi Gente" became his calling card later that year (thanks in part to one Beyoncé), and his 2018 album, Vibras, became his second release to top Billboard's Top Latin Albums. Soon enough, Balvin was linking up with reggaeton legends such as Wisin y Yandel and Zion & Lennox.

By the time Balvin teamed up with Puerto Rican newcomer Bad Bunny for their collaborative album Oasis last summer, both had become recognized names the world over. It only made sense, then, for the two reggaeton ambassadors to take their music and style to one of the biggest stages in the world: the Super Bowl halftime show. Led by Jennifer Lopez and Shakira, the Super Bowl LIV halftime performance in Miami became a watershed moment for Latinos in the United States. The two new faces leading the nation's second explosion of Latin music and culture performed alongside two icons who have enjoyed worldwide success in the decades since their debuts during the first Latin boom at the turn of the century.

"It was the perfect opportunity and a beautiful moment for us Latinos," Balvin tells New Times about the halftime show. "I can't thank J.Lo and her team enough for the space that they gave me and for the way they let me shine. I was also very happy to have had my brother Bad Bunny there, along with my compatriot Shakira; it's just a blessing, and we all had an amazing time."


"We need to create that culture and that mindset among the Latin youth that we can do anything, no matter how big."

Balvin is capitalizing on the seminal moment with the release of Colores this week. The LP is his first truly solo full-length release — no guest appearances — leaving him all alone to paint a singular, vibrant portrait of the new world he's built around himself.

"Colors are... universal; they're the first thing we learn before we even learn how to count," Balvin says of the album's chromatic theme.

"Para los gustos hay los colores," he says, referencing the popular Spanish adage that compares the world's multitude of colors to the people and personalities that make up humankind.

Once Balvin decided on the album's theme, he collaborated with Japanese contemporary artist Takashi Murakami to help bring his vision to life. The singer has been a longtime admirer of Murakami's work and incorporated some of the artist's whimsical themes into the über-successful (and equally colorful) Arcoiris Tour last year. Recruiting Murakami to design the album artwork — along with all of the floral promotional material surrounding the project's release — was a no-brainer for Balvin.

"Every song [on the album] is a different world," Balvin says proudly, "and thanks to the work of people like Murakami, I'm able to continue uplifting our Latin culture, our art, our lifestyle, our music, reggaeton, everything."

Each track is named for a different color and includes matching lyrics and production that speak to the emotions that each hue evokes.

"The song 'Rojo' is filled with lots of passion and feeling, while 'Negra' is more street and all about perreo," Balvin explains. "'Verde' is much happier, and 'Azul' is very chill."

J Balvin is making history.
Photo by Albert Piedrahita
Because of the album's reliance on Balvin's kaleidoscopic imagination, nearly every song on Colores demanded an accompanying video. With the help of prolific director Colin Tilley, Balvin has been teasing the record's drop date by sharing visuals for songs such as "Morado" and "Blanco" in recent weeks.

"The idea is to visually elevate Latin music and culture on a global scale with every video that we put out," he says.

Balvin has been a key player in pushing the idea of the Latin music celebrity passed simple entertainer to all-around culture and business mogul. He became the face of Guess' spring campaign last year through an exclusive collection — making history in the process as the brand's first Latin face — and is preparing to do the same again this spring with an equally psychedelic collaboration tied to the release of Colores.

Beyond clothing, Balvin is also making history in streetwear accessories as the first Latino to collaborate with Nike to create a Jordan sneaker. Balvin's love for Air Jordans dates back to his youth in Colombia, so the significance of this opportunity isn't lost on him. "For me, Jordan x J Balvin is a dream come true," he grins. "It's a dream for the youth, and it's a dream for the Latin community."

J Balvin's business dealings beyond music have cemented his reputation as someone who refuses to be defined, whether by audiences or by arbitrary labels imposed by the music industry. "You can't put Latinos in a box, and we're already showing that with our music and our influence in fashion and lifestyle," he asserts. "We're human beings; we're from this planet. There's no difference between an American or an Asian or a Latin American if we're all on the same playing field."

Balvin is upfront about his intentions to use his platform to inspire young Latinos to chase their wildest dreams just as he did.

"We need to create that culture and that mindset among the Latin youth that we can do anything, no matter how big," he muses. "We came from below and have been fighting for our future and building it together, and that's how change actually happens... We just have to do it and be Latino and proud!"

Every major step Balvin has taken over the past few years has defied expectations for what it means to be a Latin music star in the United States. With a full-fledged visual album, a Super Bowl performance, and multiple brand partnerships just three months into 2020, he has gone above and beyond in putting in the work to achieve what many artists only fantasize about realizing.

However unlikely it may seem, Balvin isn't completely surprised by where he has found himself.

"What was once impossible is now happening in real time," he smiles. "Well, I didn't think it was impossible, but other people said it was."
KEEP MIAMI NEW TIMES FREE... Since we started Miami New Times, it has been defined as the free, independent voice of Miami, and we'd like to keep it that way. With local media under siege, it's more important than ever for us to rally support behind funding our local journalism. You can help by participating in our "I Support" program, allowing us to keep offering readers access to our incisive coverage of local news, food and culture with no paywalls.
Make a one-time donation today for as little as $1.