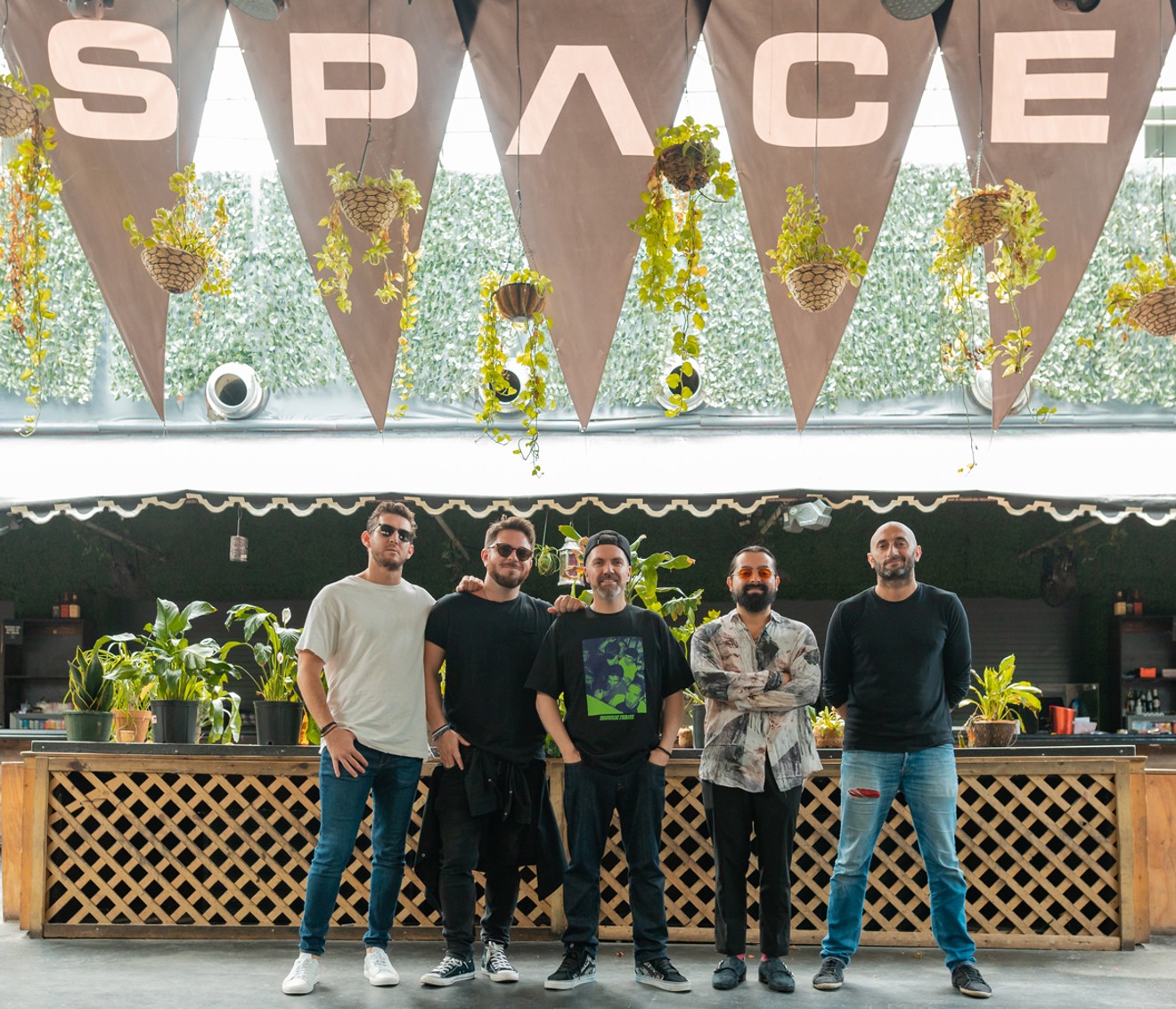 Matt Teper (left), David Sinopoli, Pasquale Rotella, Coloma Kaboomsky, and Davide Danese Photo by Adi Adinayev
Anyone vaguely familiar with dance music probably knows Insomniac, the event company behind one of the largest dance music festivals in the world, Electric Daisy Carnival. Several EDC events take place around the globe, but its flagship is the EDM bacchanal at the Las Vegas Motor Speedway every June.

For a while, the company has been diversifying its offerings, becoming more of an all-encompassing lifestyle brand including a record label and editorial content centered on dance music.

That strategy seems to be continuing, because Insomniac has announced it's expanding its reach with an ownership stake in downtown Miami's Club Space. It's unclear what the new ownership structure will look like, but according to Insomniac, management and operations at the club will remain unchanged. The partnership is meant to ensure Space's presence in downtown for at least the next decade.

“Space is one of the most iconic dance music venues in the U.S., if not the world, and I’m excited that Insomniac is now a partner,” Insomniac founder and CEO Pasquale Rotella said in a release. “Davide, Coloma, and Sinopoli have done an exceptional job revitalizing this venue to be better than it’s ever been. They are passionate people [who] care about creating experiences and share the same core values that Insomniac lives by. The Space Invaders team will still be running the show, and together we will set the bar for entertainment in Miami. Space is another important piece of the Insomniac vision coming together.”

Space opened in Miami's Park West neighborhood in 2000 under the ownership of Louis Puig. It moved to its current location in 2003, briefly calling itself Space 34 before reverting back to its old name. Puig sold the club to a group of investors in 2013. At the time, it seemed as if the nightclub's days were numbered — it had lost its luster and seemed unable to keep up with music trends.

That's where the Space Invaders came in. In 2016, Davide Danese, Coloma Kaboomsky, and David Sinopoli took control of the club and immediately injected new energy into it. Though the club's outdoor area, the Terrace, saw some upgrades, it remained mostly unchanged. The biggest transformations happened on the first floor when the old Libertine space became Floyd — the truly underground little sister of sorts to the Terrace — and with the introduction of the Ground, a midsize venue that regularly hosts live music acts.

“We have worked tirelessly over the past three years to renew the energy inside Club Space and maintain a calm, safe environment while curating a space where people can enjoy a wide range of entertainment," Sinopoli said in the release. "Our Space Invaders team will continue to book the music and operate the club exactly as we have been."

Before creating the Insomniac empire, Rotella cut his teeth in the early-'90s Los Angeles rave scene. The parties held in warehouses around the city formed the sort of primordial soup from which EDC would later emerge. By the 2000s, the festival had grown into a massive endeavor, culminating in the 2010 edition at the Los Angeles Memorial Coliseum, which came under scrutiny for alleged underage partiers and a stampede that injured more than a hundred attendees.

The fallout after EDC 2010 pushed Rotella to find a more suitable home for the festival. The following year, he moved his event to the Las Vegas Motor Speedway, where it flourished as the EDM trend took over America. But even now that the EDM bubble has burst, EDC continues to be one of the largest music festivals in America.

With Rotella's 30 years of experience in dance music, Insomniac's ownership stake in Space is taking him back to those early warehouse party days. Space also stands to benefit greatly from the partnership: The area around the club is quickly transforming into a condo canyon, and Insomniac's deep pockets will help cover the rising cost to operate in the neighborhood.

"Insomniac is very strong nationwide," Sinopoli tells New Times by phone. "They can put in an offer for five gigs around the country — including Miami — and pay one lump sum. They have immense power when it comes to bookings."

For the most part, Sinopoli says, bookings will still run through Danese and himself, affirming that "Saturdays are sacred." In the future, Insomniac could book one or two Friday shows a month, but the left-field programming at Floyd will remain intact. The Ground, the property's first-floor midsize venue, will continue to present a wide variety of acts, from live bands to EDM DJs.

Space isn't Insomniac's first foray into the Sunshine State. Its other Florida-based asset is the Orlando edition of EDC, which will take place again in November and expand to three days this year. Lake Okeechobee News confirmed last week that Insomniac is also a producing partner in Okeechobee Music & Arts Festival's return next year. However, it's Insomniac's partnership with Space that places it in the territory of its closest direct competitor in Miami: Ultra Music Festival.

Club Space. 34 NE 11th St., Miami; 786-357-6456; clubspace.com.
KEEP MIAMI NEW TIMES FREE... Since we started Miami New Times, it has been defined as the free, independent voice of Miami, and we'd like to keep it that way. With local media under siege, it's more important than ever for us to rally support behind funding our local journalism. You can help by participating in our "I Support" program, allowing us to keep offering readers access to our incisive coverage of local news, food and culture with no paywalls.
Make a one-time donation today for as little as $1.