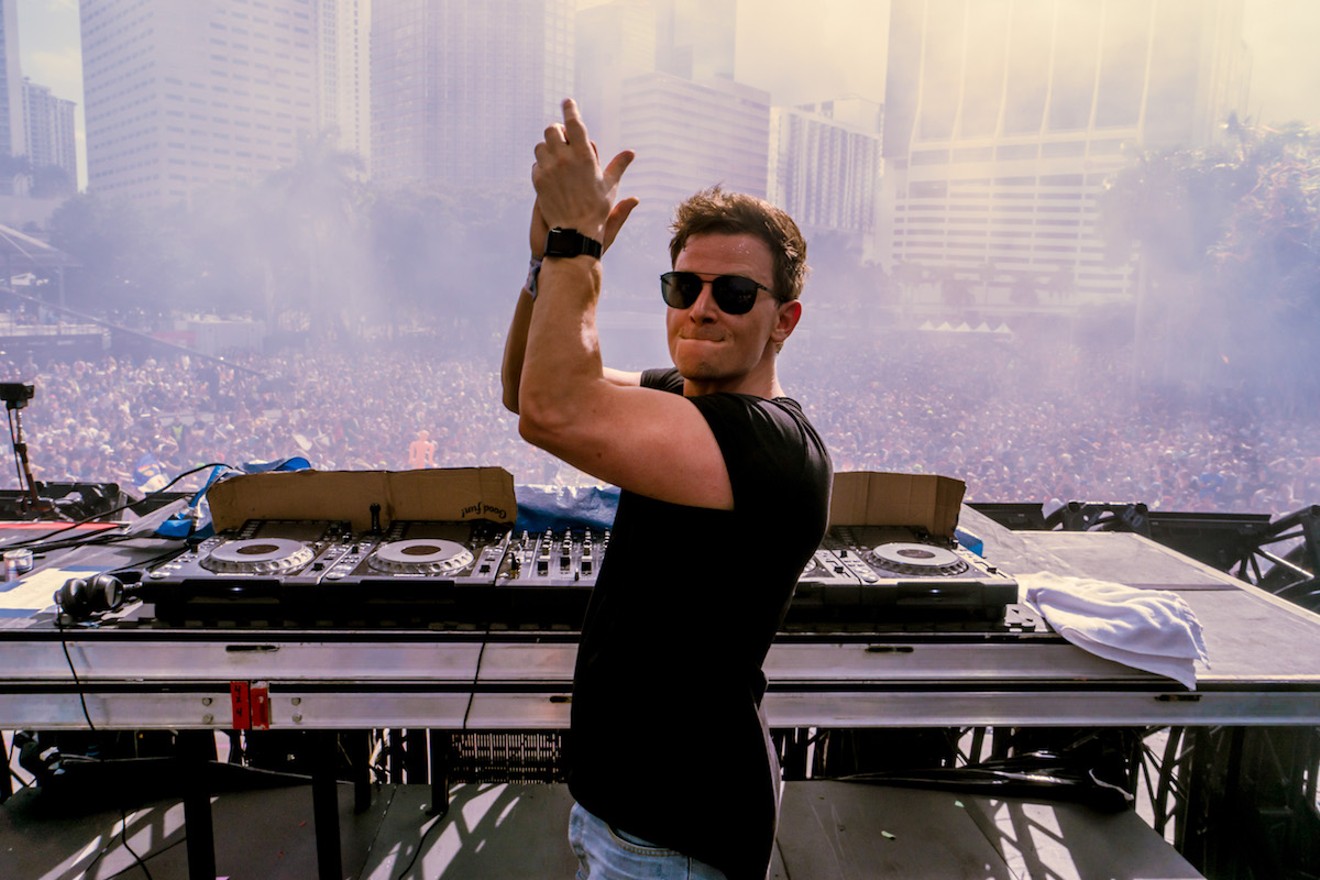 Fedde Le Grand Photo by Arturo Orozco
In 2006, "Put Your Hands Up 4 Detroit" catapulted Dutch house producer Fedde Le Grand into the spotlight. Beyond that, it helped revive a flagging industry and is commonly regarded as one of the crucial tracks of the rebirth of dance music.

This past Sunday, Le Grand delivered one of the best headlining sets at Ultra Music Festival 2017. With remixes of Kanye’s “Love Lockdown,” the Weeknd’s “Can’t Feel My Face,” and the '90s disco hit “Rhythm of the Night,” his performance felt more like a radio-friendly house party than a set at a corporate-sponsored EDM blowout.

Le Grand is a Miami Music Week regular, having attended the festivities for 11 years in a row. Just before taking the stage, he shared with New Times one of his favorite memories from Ultra.

"I played the Main Stage; it was in a changeover spot," he says, laughing, before correcting himself. "I was playing between the Cure and Tiësto, and I was like, wow. And then they rolled up this teeny, tiny, shitty cart, and that was my booth." There was chanting: 'Tiësto! Tiësto! Tiësto!' I was like, fuck me, but it worked out in the end. It was extraspecial because I nailed it and survived."

Le Grand has more than survived; he has thrived. So much of his success is thanks to the launching pad that was "Hands Up 4 Detroit." Regarding the anniversary of that song, which turned ten last year, Le Grand acknowledges he was merely a part of the whole movement that reenergized dance music. That movement included Eric Prydz's "Call On Me" and Mason's "Exceeder."
"I'm just thankful to be a part of that whole thing," Le Grand says.

Although he was already doing well in his native Holland, the most significant change for Le Grand after the single exploded in popularity was that he wound up playing fewer but better gigs. "Before, if it didn't really work out, fine, I have three more [shows] tonight. But now you travel 14 hours to get somewhere and you have two hours to do your thing and if it's eh, you're upset.

"My parents were never rich, and we didn't travel a lot,” he continues. “So I'm very, very happy and grateful that I get to see so much of the world and its cultures. I think that's a thing that affected me the most, just getting a wider scope, a better view of the world."

The 39-year-old has a family of his own now, and he’s become a role model for younger DJs. His reasons for taking artists under his wing began in the early days in the business. "When I started out, I never got any support," he says. "I started my own label; I started my own parties; I produced myself. I used to go out at night and pass out flyers for my own parties."

Now he mentors young artists. Some of the DJs he's helped along the way include Danny Avila and Nicky Romero. "In the end, we have to take care of this beautiful thing we have," Le Grand says. "Of course, there's a little competition as well, but in the end, it's more important that the scene stays stable.”