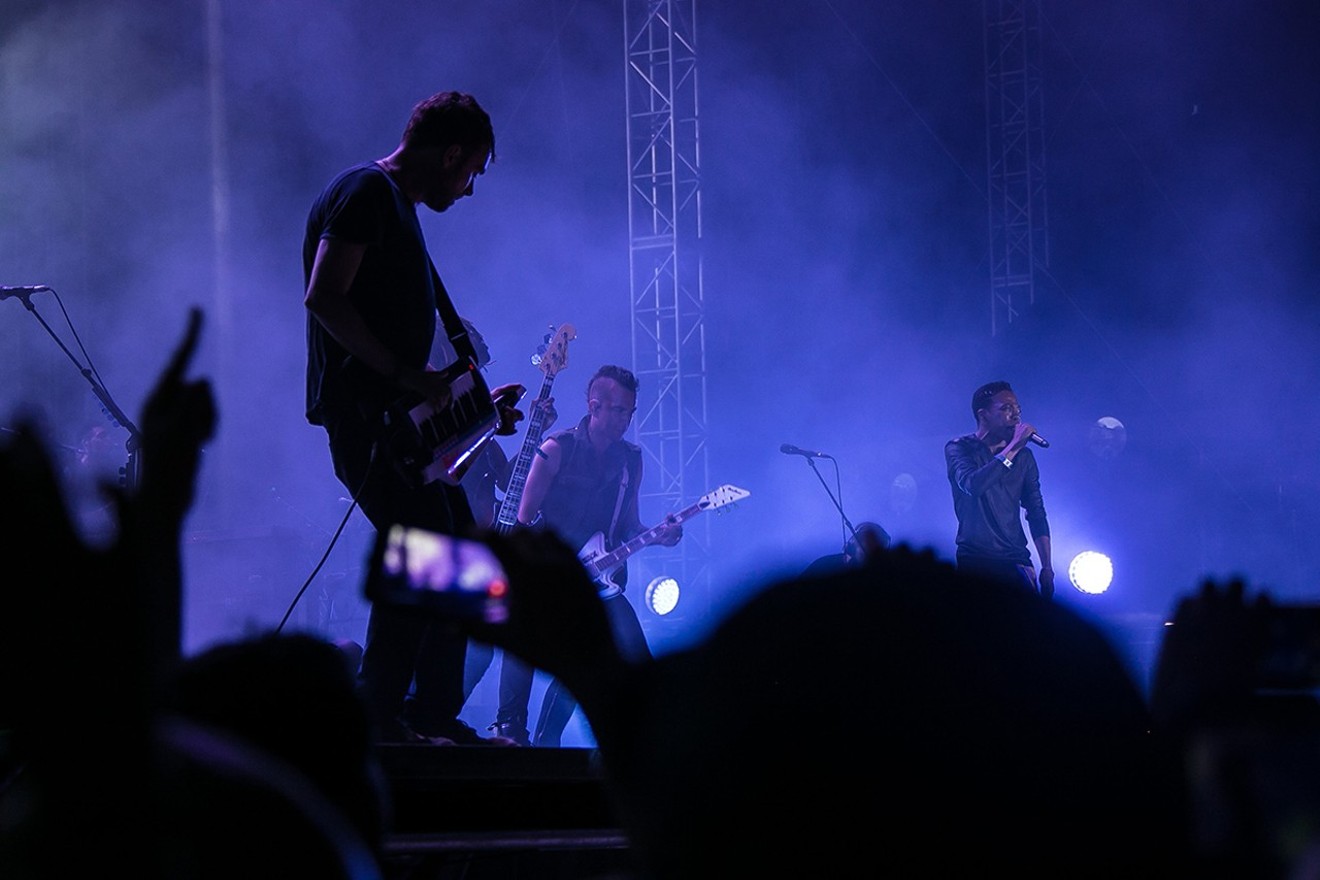 See more photos of III Points 2017 Day One here. Photo by George Martinez
Halfway through his set, Damon Albarn began musing about his time in Miami so far.

"I'm recording new music, and I record in every city. I'm staying at a hotel on the beach," he told the crowd gathered at the Main Frame stage Friday night at III Points. "It's a corner room with a balcony and a great vista. All day I've seen planes with banners pass by: Puff Daddy, Steve Aoki, Magic City, some bollocks vodka. Just so you know where the inspiration for the lyrics on the next album came from."

Yes, Albarn is still sardonic as ever, but he seemed genuinely happy to finally bring his collaborative project, Gorillaz, to South Florida. It's been a long time coming. The virtual band released its debut in 2001 and peaked in popularity and critical acclaim with 2005's Demon Days, which included monster singles "Feel Good Inc." and "DARE."

It was no surprise that Gorillaz shirts dotted the festival throughout the first day. Florida has waited 12 years to finally see Albarn bring 2-D, Noodle, Murdoc, and Russel to life. By the time 11:30 p.m. rolled around, the festival had the largest crowd it's probably ever seen. But for a music festival, III Points still remains intimate and a treat for music fans who shy away from large endeavors like Bonnaroo or Coachella.

"Hello, hello, is anyone there?" the voice over the sound system asked, signaling the intro to "M1 A1" off the band's debut album. It was a raucous start to Gorillaz's set, with a chorus that simply goes, "La, la, la, la, la, la, la, hey!"

"Last Living Souls" off of Demon Days followed, complete with the very satisfying emphasis Albarn puts on the last S in "souls."

Photo by George Martinez
The animated representation of the band was sparse, especially considering that during Gorillaz's 2001 tour, Albarn and his collaborators appeared only as silhouettes behind a screen with projected visuals of the animated band. Albarn and artist Jamie Hewlett also experimented with holographic representations of the band during the Demon Days era, but that only led to a couple of performances at award shows.

Instead, last night, Albarn stood front and center with a six-piece band, six — yes, count 'em, six — singers to round out the backing vocals, and collaborators like Peven Everett and Jamie Principle coming on stage as needed. That's not to say the fictional quartet didn't make any appearances. There were interstitials throughout the set introducing the band members, and accompanying music videos were used to bolster visuals.

Naturally, since Gorillaz' appearance at III Points was part of the band's Humanz Tour, the set list heavily emphasized the most recent album. "Saturn Barz," "Busted and Blue," "She's My Collar," and "Andromeda" all made appearances, with Kali Uchis, who had performed her own set earlier at the S3ctor 3 stage, joining the band to sing her part on "She's My Collar." But the standout performance was oddly "Out of Body," which only appears on some releases of Humanz as a bonus track. Kilo Kish and Zebra Katz both reprised their parts and backup singer Michelle added a diva house-music vibe to the whole performance.

When it came to the band's other three albums, they were represented somewhat unevenly, with Plastic Beach getting the most attention, and Demon Days, a critical darling, only having two songs to show for it. Even odder yet was the fact that "El Mañana" and "Last Living Souls" were played but not hits like "Feel Good Inc.," "DARE," or "Dirty Harry."

Photo by George Martinez
Even if Miami didn't get to sing along to De La Soul's rap on "Feel Good Inc.," Albarn knew better to deprive the the festival of a hit. Toward the end of the set, "Clint Eastwood" got the entire crowd singing the chorus with Del the Funky Homosapien's prerecorded rap verses still packing a punch 16 years later.

After the big hit was over, Albarn confessed that the band had only practiced the next song earlier in the day because it seemed fitting to perform it in Miami. "No better place than Miami... It's come home this song after all these years," he said as he kicked off "Plastic Beach." It marked the first time the song has been performed on this tour and the first time it's been performed live since 2010.

And then it was over. No encore, even after the crowd remained waiting to see if the band would return. In fact, the set was over around 12:50, a full 10 minutes before the scheduled 1 a.m. cutoff.

To say Gorillaz was the most anticipated performance of the festival would be a understatement. The band is perhaps a big reason III Points sold out for the first time in its five-year history. It also served as validation for the festival, regaining audiences' trust after LCD Soundsystem canceled last year due to Hurricane Matthew. So the abrupt ending seemed somewhat anticlimactic, especially when there was time to squeeze in an encore or two.