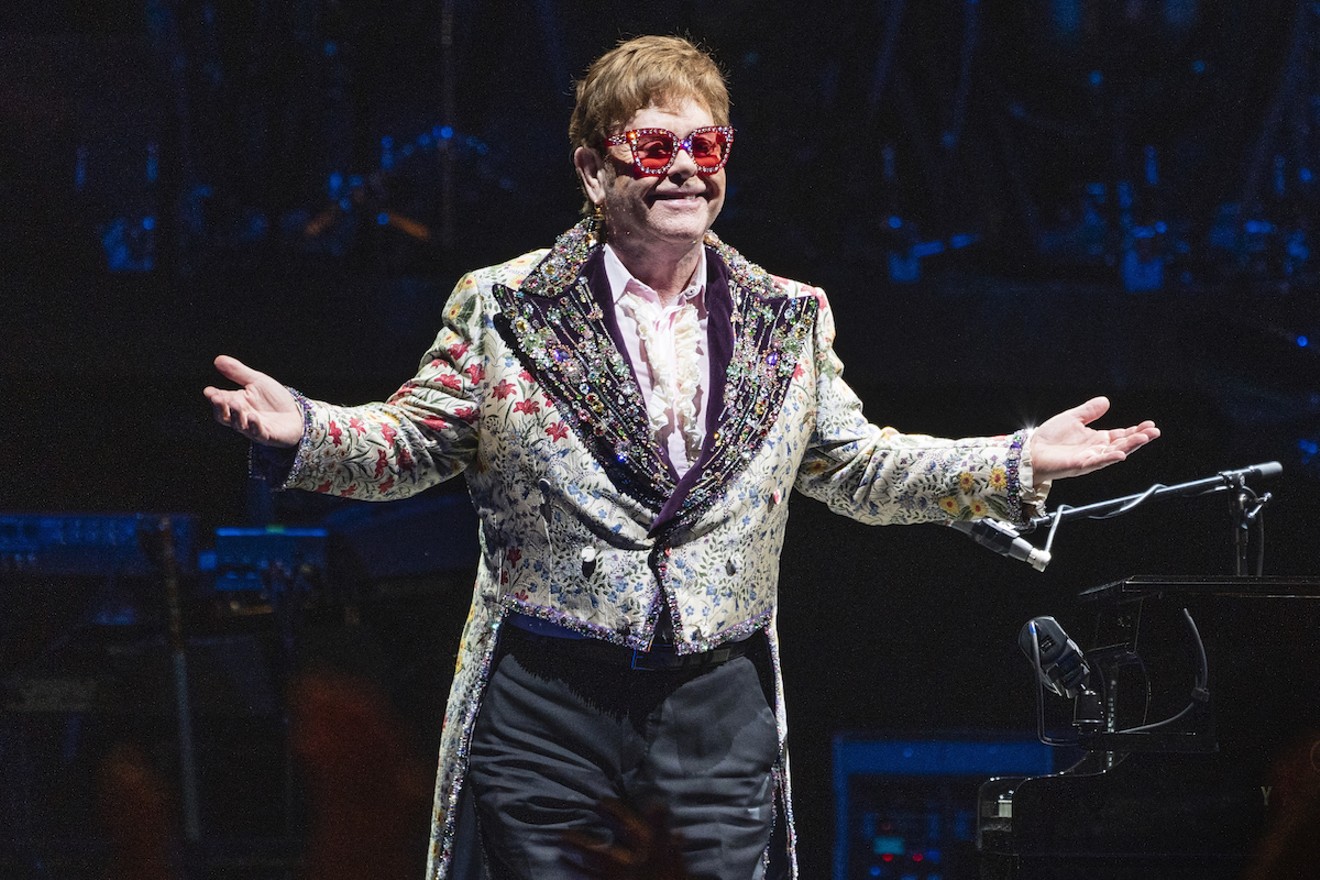 Elton John during the New Orleans stop of Farewell Yellow Brick Road Tour on January 19, 2022. Photo by Erika Goldring/Getty Images
When Elton John announced his Farewell Yellow Brick Road Tour back in the Stone Age of 2018, he said the victory lap would last three years. It seemed excessive at the time, but extravagance is something of an expectation when dealing with Sir Elton — take his trademark rhinestone spectacles and that 1980 Central Park performance in a Donald Duck costume as examples.

But we're now in year five of Farewell Yellow Brick Road — and Elton's Thursday-night performance at the FTX Arena was his fifth South Florida show of the tour.

This one, he promised to the crowd, was his final Florida show. Really. He swears.

"My first concert in Miami was in 1971. This is my 60th concert in Miami and my last," John told the crowd while cloaked in an emerald bathrobe before his finale at the piano. "I want to spend the rest of my life with my family. I think it's only fair."

On Thursday night, you could understand why the Rock and Roll Hall of Famer has had such an insanely extensive goodbye. First, he really seems to enjoy himself on stage. But even more impressive is that at 75 years old, though he seemed to have a little trouble walking around, he still sounded like he was at the top of his game. From the opening chords of "Benny and the Jets," he was a powerhouse at the piano and gracefully banged the keys through an over two-hour set that touched on many of his biggest hits.

What's just as impressive is how many hits Elton John has. If you ever listen to a classic rock or easy-listening radio station — or even spend a couple of hours at a TGI Friday's — you would hear half the songs he played.

"Your Song," "Don't Let the Sun Go Down on Me," "The Bitch is Back." This human jukebox has so many famous tracks that his 22-song show still didn't have time to include "Don't Go Breaking My Heart," "Daniel," or that godawful Lion King song. But you know what? After this show, he could've even convinced me to like "Circle of Life."

John sang with soul and fiddled around with the arrangements enough to make songs I'd heard so many times sound fresh. The six-piece backing band, which included three (three?!?!?) drummers, funkified and jazzed up "Levon" to make it almost seem like a jam band was playing it.

The classic "Rocket Man" took a psychedelic detour as Elton's piano and a slide guitar joined together for some tripped-out sound effects. The beautiful "Tiny Dancer" started out as a solo piano number before the rest of the band slowly faded in on the second verse.

Beyond his vocal and piano abilities, Elton John showcased his storytelling skills as he regaled the crowd with anecdotes from his career. Before "Border Song," he reminisced about his first time performing in the U.S., which segued into a tale about the many times he worked with Aretha Franklin all the way to her last-ever performance at a benefit he organized.

"It was six months before she died. I told her she was too frail to play," Elton remembered. "She then sat down and played for an hour and a quarter."

With his ability to capture the audience's attention and carry tunes, it was a bit confusing why he chose to show amateurish videos like what you might see in a karaoke bar on a giant screen behind the band. Elton and his musicians were strong enough to do without the Marilyn Monroe imitator posing on-screen during "Candle in the Wind" or the b-roll of elderly couples holding hands during, "I Guess That's Why They Call It the Blues." But that's nitpicking.

If this is indeed Elton John's final concert in Miami, he followed the old showbiz adage of leaving the audience wanting more. And who knows? Maybe touchdown will bring him 'round again in not such a long, long time.

Encore:
- "Cold Heart"
- "Your Song"
- "Goodbye Yellow Brick Road"
KEEP MIAMI NEW TIMES FREE... Since we started Miami New Times, it has been defined as the free, independent voice of Miami, and we'd like to keep it that way. With local media under siege, it's more important than ever for us to rally support behind funding our local journalism. You can help by participating in our "I Support" program, allowing us to keep offering readers access to our incisive coverage of local news, food and culture with no paywalls.
Make a one-time donation today for as little as $1.