9 Mile began in the '90s as Bob Marley Festival, founded by the reggae legend's mother. It was a free show at Bayfront Park requiring only a donation of canned food for entry but has morphed over the past two and a half decades. Now known as 9 Mile Music Festival, it is held in the more apt island locale of Virginia Key Beach Park and demands a hefty entrance fee (though organizers still request donations of canned foods to feed the hungry in Miami and Jamaica).

The one thing that hasn't changed over the years is the commitment to providing a smorgasbord of reggae. From 1 p.m. to past 1 a.m., nearly a dozen reggae acts entertained the crowd. Old-school hip-hop served as a nightcap, with Nas and special guest P Diddy taking the stage at close to 2 a.m. Or was it 3 a.m., with daylight saving time going into effect during his 45-minute set? 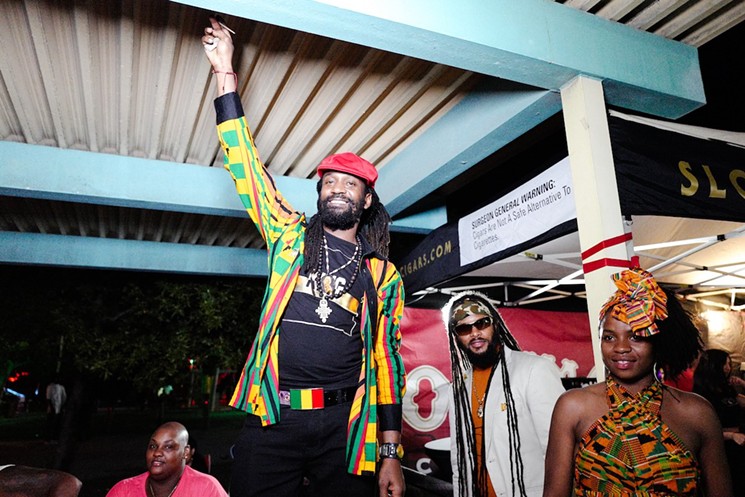 Daniella Mia
Because the fest is a Marley production, previous incarnations have boasted plenty of the late singer's children. This year, only Julian Marley represented. Taking the stage around 8, JuJu enjoyed peak crowd numbers. Waves upon waves of people danced while Bob's ninth child crooned, his waist-length dreadlocks swaying. He played plenty of tracks off his new record, As I Am, but the highlight was probably his finale, a faithful rendition of his father's "Exodus." As Julian exited, his massive band jammed the outro for a couple of minutes.

Next was Busy Signal, who said he was making his Miami debut. His band backed him with synth-heavy dancehall. The Jamaican singer's vocal delivery was somewhere between singing and rat-a-tat rapping. His gravelly voice made it hard to decipher his lyrics until he showed off his versatility with a cover of Cat Stevens' "Wild World."

Shabba Ranks, the veteran singer best known for screaming "Shabba!" whenever the moment calls for it, was dressed in a dapper pink and white suit. "My attire is for breast cancer," he told the crowd. Then he crumpled up the notion he might be politically correct by adding, "I'm not into the #MeToo movement; I'm into the boom-boom movement." He brought out a female accompanist to sing "Telephone Love" and his trademark "Mr. Loverman," and proceeded to grind with her in what was apparently a boom-boom movement. Daniella Mia
The reggae portion of the evening was completed by Sizzla, a high-energy performer whose set coincided with a midnight shower. Rain pushed a decent portion of the crowd toward the exit and required the keyboards to constantly be toweled off, but it didn't stop the prolific Sizzla from jamming and hitting some surprisingly high notes.

The enormous crowd (reportedly close to 15,000) behaved so pleasantly it could almost lead one to believe this site will be able to handle Ultra Music Festival in a couple of weeks. Regardless of the the EDM extravaganza might have on this place of natural beauty, let's hope nothing forces 9 Mile to take another year off. Let's do it again in 2020 — same time, place.
KEEP MIAMI NEW TIMES FREE... Since we started Miami New Times, it has been defined as the free, independent voice of Miami, and we'd like to keep it that way. With local media under siege, it's more important than ever for us to rally support behind funding our local journalism. You can help by participating in our "I Support" program, allowing us to keep offering readers access to our incisive coverage of local news, food and culture with no paywalls.
Make a one-time donation today for as little as $1.