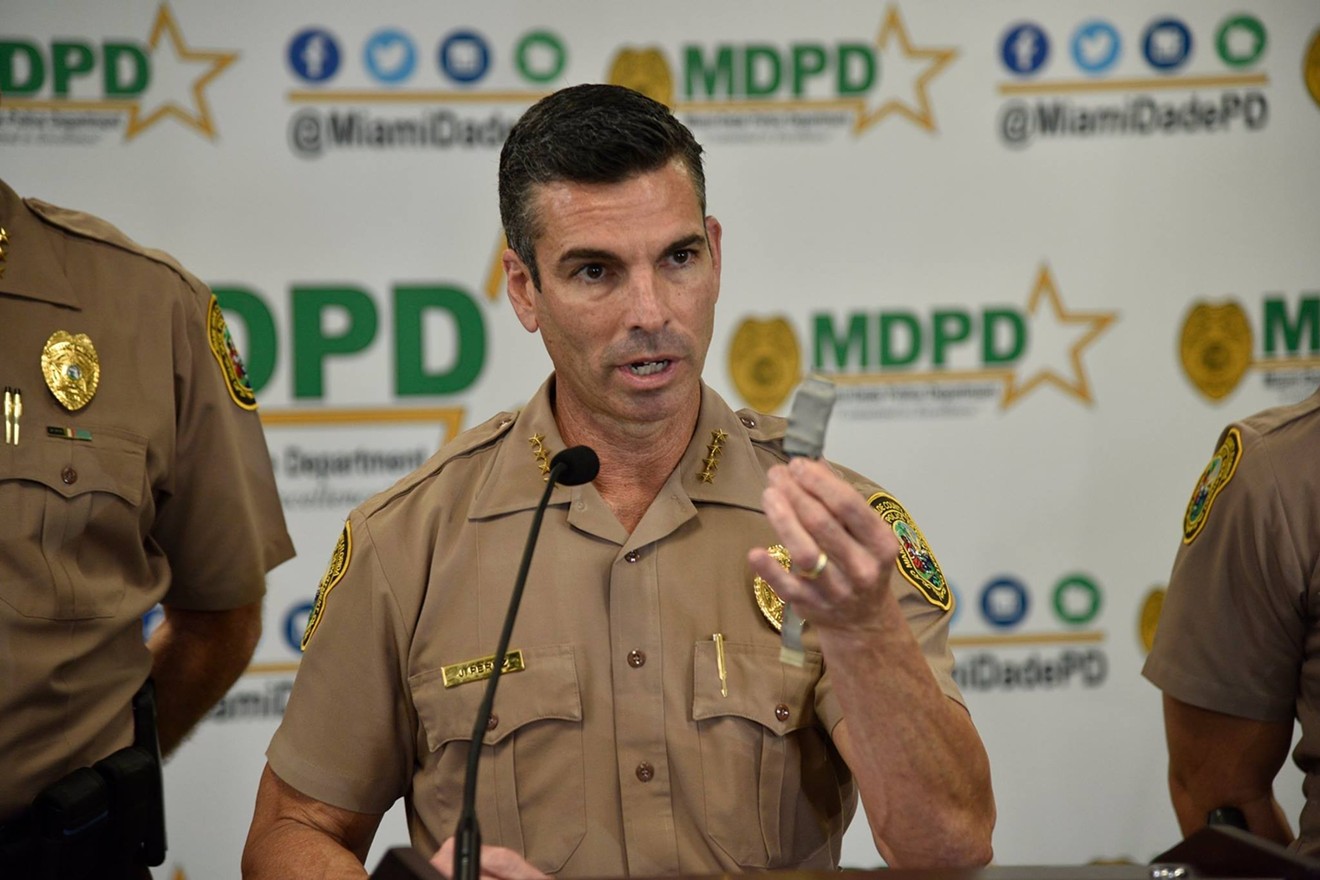 Miami-Dade County Police Director Juan Perez Miami-Dade County Police Department
This past July 1, Florida legalized hemp — the part of the cannabis plant that isn't psychoactive and can be used to make rope, paper, all sorts of food, and CBD oil. But the new law is also leading to a less expected consequence: It's changing the way cops conduct drug enforcement.

Earlier this week, the Orlando Sentinel reported that multiple sheriff's departments in Central Florida are instructing cops not to detain people for "marijuana odor" alone anymore, because both hemp and regular pot smell the same. Now, the Miami-Dade Police Department — the largest force in Florida — has confirmed to New Times its cops are being instructed to do the same.

A police spokesperson this morning sent the following legal memo to New Times:

TODAY’S TIP: Effective July 1, 2019, hemp is no longer a controlled substance and is therefore legal to possess.

Hemp and cannabis look, feel and smell the same, and both can be smoked. Currently, there is no way to distinguish between hemp and cannabis based on plain view or odor alone.

Accordingly, officers can no longer search a vehicle based solely on the odor of cannabis. Now you must articulate additional factors that lead you to believe that the substance is illegal cannabis, based on the totality of circumstances. You need “odor plus.”

Some “odor plus” factors include: signs of impairment, information/intelligence regarding illegal activity prior to the stop and search, admission of possessing a controlled substance, etc.

Of course, the shift isn't likely to change too much on the ground for MDPD cops. Many marijuana stops already aren't made on the basis of cannabis odor. And marijuana is, technically, decriminalized in Miami-Dade County. Since 2015, cops have had the option to write civil tickets for possession of less than 20 grams of cannabis. However, New Times in 2018 published a series of articles showing the vast majority of Miami-area police departments hadn't bothered to begin issuing citations. (City of Miami Police, for example, had actually arrested more people for weed possession following decriminalization.) Miami-Dade County at least bothered to start issuing weed tickets, but data showed the vast majority of people given tickets were white, while most of those arrested for low-level weed possession were black. (Data shows black and white Floridians use marijuana at the same rates.)

Still, the new memo makes it slightly more difficult for officers to conduct a search based on marijuana smell alone. Critics of police reform often complain that cops across the nation use the alleged "smell of weed" to pull over or search people of color. Earlier this year, the Miami Herald reported that a 24-year-old man arrested for marijuana possession tried to argue in court that police conducted an illegal search of his car, because medical marijuana is now legal in Florida. Prosecutors later dropped his case.

The state's hemp law has pushed other Florida municipalities to adopt similar rules. Yesterday the Orlando Sentinel reported that State Attorney Phil Archer — the top prosecutor in Brevard and Seminole Counties, in Central Florida — sent a memo telling cops in his jurisdiction they also now need more than the presence of "weed odor" to search a person or car.

“Officers should be able to articulate additional factors in addition to the smell or look of the substance, including such things as the impairment of the person and any admissions or statements that may be made,” the memo  reportedly said. Archer's office also told cops that because state law now defines "hemp" as having 0.3 percent concentration of THC or less, marijuana samples will need to be tested for THC content. The problem, of course, is that the Florida Department of Law Enforcement, which conducts those tests, currently tests for presence, not concentration, of THC in a substance.

Miami-Dade State Attorney Katherine Fernandez Rundle's office did not immediately respond to New Times' question asking whether the SAO has issued any similar memos.
KEEP MIAMI NEW TIMES FREE... Since we started Miami New Times, it has been defined as the free, independent voice of Miami, and we'd like to keep it that way. With local media under siege, it's more important than ever for us to rally support behind funding our local journalism. You can help by participating in our "I Support" program, allowing us to keep offering readers access to our incisive coverage of local news, food and culture with no paywalls.
Make a one-time donation today for as little as $1.