Despite its seaside locale and tropical temps, Miami can feel like nothing more than an urban jungle, jam-packed with high-rises, snarled traffic, and concrete. But drive far enough down SW Eighth Street and you'll enter another world: the Everglades. Everglades Safari Park has served as a gateway to Florida's glorious iridescent "River of Grass" for more than 40 years. This sprawling mecca of airboat rides and animal education is where the National Park Service sends bigwigs for a breezy spin: John McCain, Joe Biden, Ludacris, even the Kardashians have caught a ride. Hop on one of the boats and sail across the endless stretch of still water and open sky. Feel the sun on your skin, the wind in your hair, and watch the world rush by at 30 mph. You'll see spatterdock, duck potato, pond apple, and sawgrass; great egrets, grackles, and gators. Back on land, you'll get schooled in all things alligator and their awe-inspiring attributes — no "wrestling" shows, no cheap tricks. No matter what, you'll leave with a new reverence for Mother Nature and the majestic nature of our own backyard. Nothing could be further from your white-knuckled morning commute. 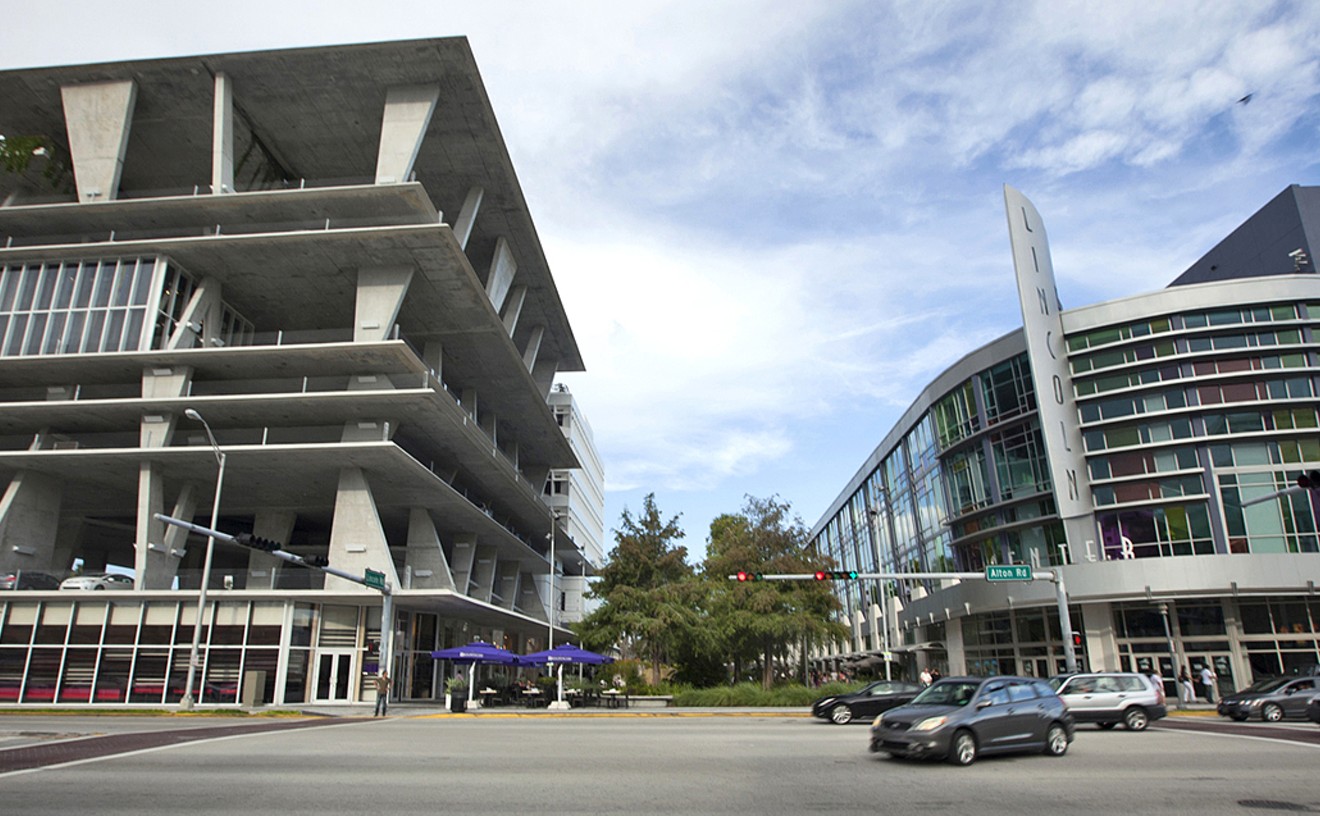 Miami is filled with interesting characters. There's that guy who rides around on a motorized bicycle, that man on the Metrorail jammin' on his violin, that dude who walks around Hialeah carrying a banjo and Stetson hat — the list goes on. But if you really want to keep entertained for hours, there's Calle Ocho. Every year in March, the mamis and papis of the Magic City crowd SW Eighth Street with their skin-tight white shorts, Cuban-flag bikini tops, chancletas, 305 pride tats, and gold teeth for the largest block party in the country. Fashion aside, you'll find middle-aged Cuban men shaking a pair of bright-yellow maracas, dancing with a mailbox; guys wearing a snake around their necks; ladies twerking in the middle of the street to reggaeton; impromptu conga lines; Celia Cruz doppelgangers; and even lonely lovers walking around with a blow-up doll. It may happen only once a year (the 2015 Carnaval Miami is scheduled for March 15), but with so many people to gawk at, you'll be set for the next 364 days. 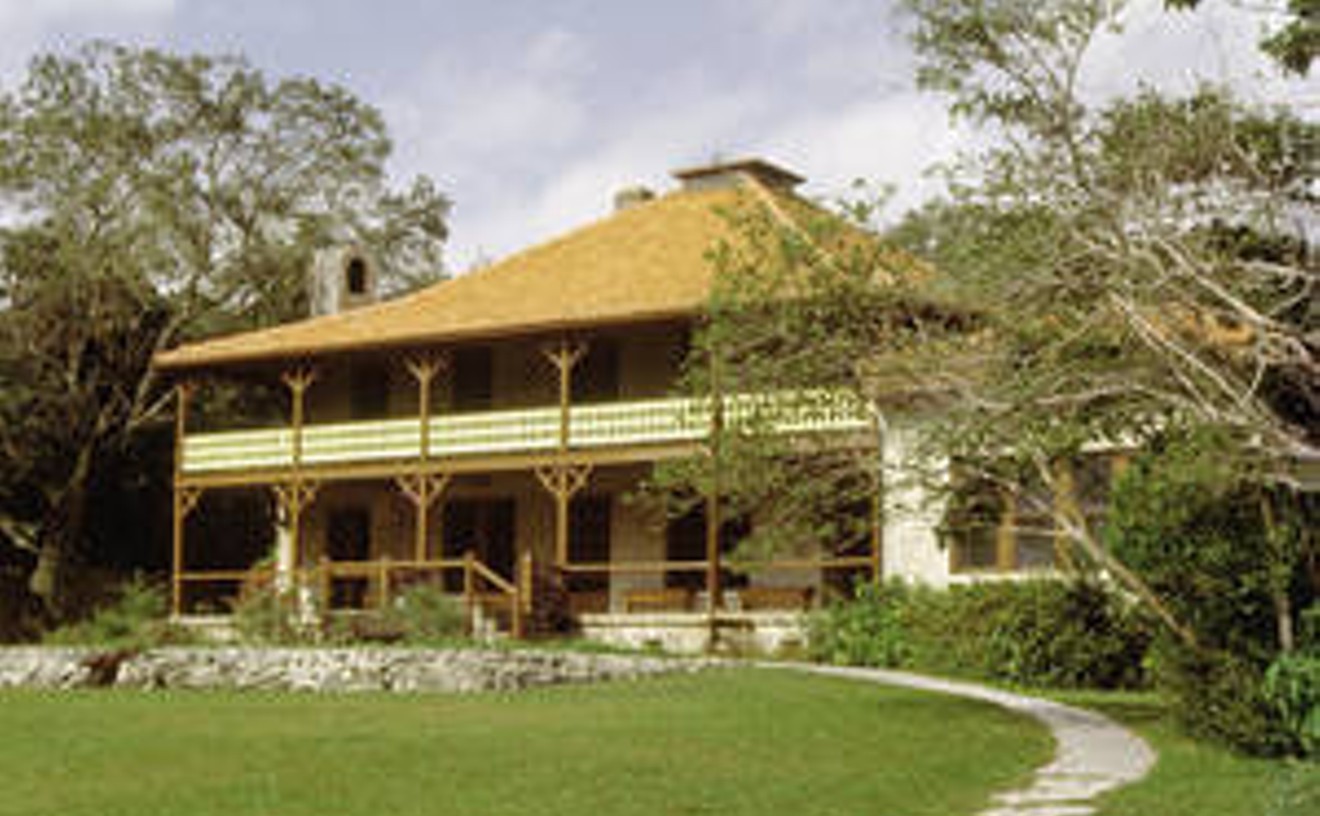 To many a college kid, the Grove brings back memories of drunken shenanigans, hookups, and binge drinking. But nestled somewhere among Sandbar, Mr. Moe's, and a canopy of live oak trees lies a piece of overlooked history — the Barnacle Historic State Park. Built in 1891 by yacht designer and Coconut Grove pioneer Ralph Middleton Munroe, this is the oldest house in Miami-Dade County still standing in its original spot. Originally from New York, Munroe got his first taste of the Magic City while vacationing here in 1877. Like most first-timers, he fell in love with Miami but, of course, had to return home to carry on business. Munroe married his first wife, Eva, in 1879 and had a baby girl. A few months after the birth of their daughter, Eva contracted tuberculosis. In hopes of recovery, Munroe left his daughter in New York and sailed south, bringing his wife, her sister Adeline (who was also diagnosed with TB), and brother to the warm SoFla climate. The four lived on Biscayne Bay until 1882, when Eva died. Upon his return to the Big Apple, he learned his daughter had also died. That's when Munroe decided to leave the city and make his home on the bay his permanent residence. The commodore bought 40 acres of bayfront land and a yacht, The Kingfish, for $400. Prior to constructing the Barnacle, Munroe built a boathouse on the same land in 1887, where he lived until the main house was completed. About three years later, he went on a sailing trip and met his second wife, Jessie Wirth. He put a ring on it in 1895, and the two began their life at the Barnacle. Originally, the house was an octagon-shaped, one-story structure raised off the ground on wooden pillars. It was built with salvaged lumber from the bay's shipwrecks. But two kids and 13 years later, in 1908, the house was lifted and a new first story was built below. The Munroes called the Barnacle home for the remainder of their lives. In 1973, a relative donated the landmark to the good ol' state of Florida. So the next time you're out in the Grove, party like it's the 1900s and check out the oldest house in the 305. 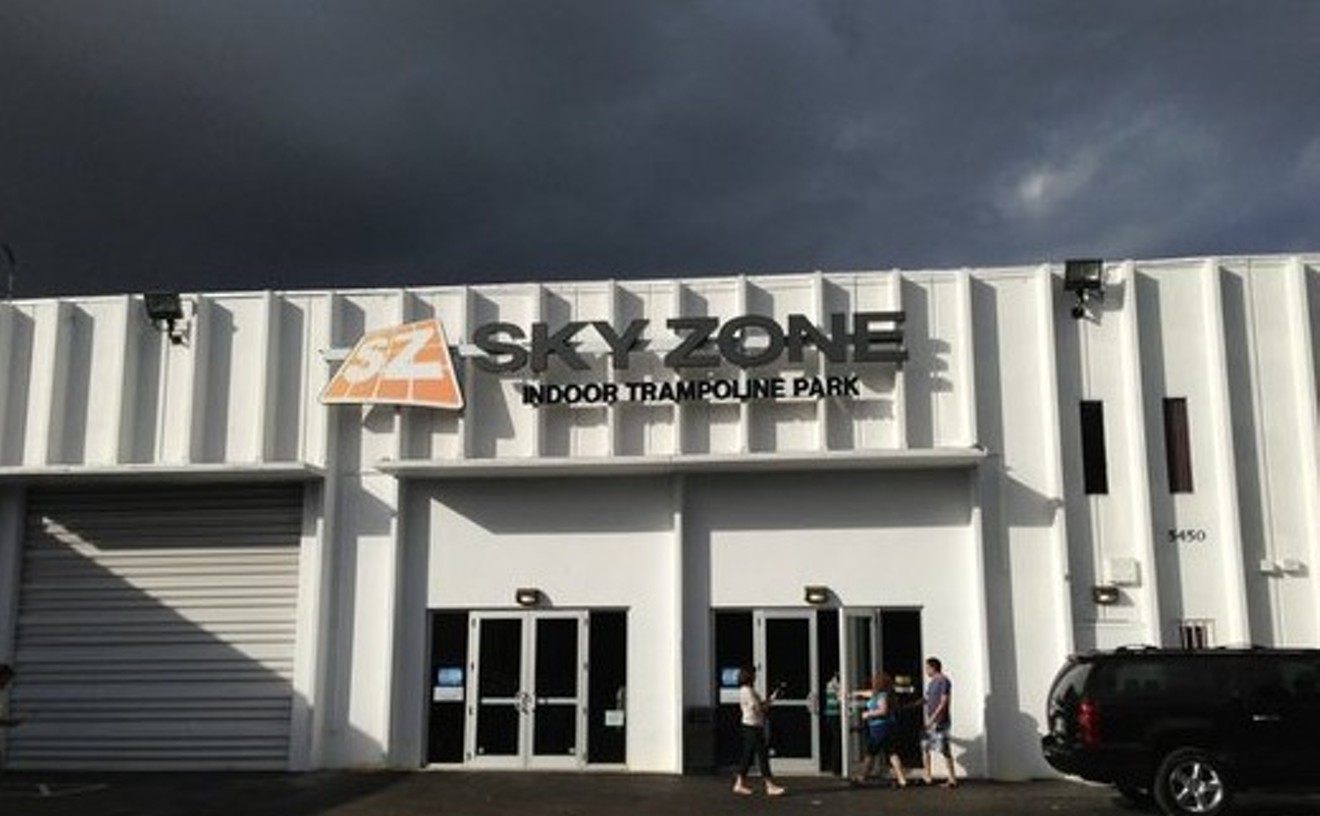 Remember how much you used to love running endlessly in circles and jumping around like a kangaroo? Not much has really changed since then. Hidden in a maze of warehouses and factories in Doral is every kid's paradise — Sky Zone. Because the place is like a trampoline on steroids, kids will literally bounce off the walls as they flip and somersault in the main room of the 16,000-square-foot indoor trampoline park. Sky Zone prides itself in its Ultimate Dodgeball Championships, which explains why there are three courts dedicated to the sport. There's also a Sky Slam area where future NBA stars can unleash their inner LeBron James and dunk those balls like a boss. If you have amateur swimmers on your hands, there's a sea of foam cubes for youngsters to dive into. When they need a break from all that jumping, they'll cool off with a game of air hockey or virtual skateboarding in the arcade. And whenever you get hungry from watching all of those rugrats jump around, hit up the Sky Café for some pizza, cupcakes, and pretzels. The kiddie party runs Monday through Thursday from 3 to 9 p.m., Friday from 3 to 10 p.m. (with the Sky Jam for big kids 16 and over from 10 p.m. till midnight), Saturday from 10 a.m. to 10 p.m. (with JumpaPooloza from 10 p.m. till midnight), and Sunday from 10 a.m. to 9 p.m. The prices aren't too bad either and include a pair of bright-orange SkySocks. Ten dollars buys 30 minutes of jump time, $14 gets you an hour, 90 minutes will cost you $18, and two hours go for $21. The Sky Jam is $19 and includes a 90-minute jump, two slices of pizza, and a fountain drink. The Saturday-night JumpaPooloza is $17 for two full hours. At the end of the day, everyone wins — the little ones knock out, and parents score a kid-free night for themselves.

Once you've made your way offshore and the sprawling cityscape is but a distant backdrop, it's time to drop over the side and find yourself immersed in the surreal. Neptune Memorial Reef, located about three miles off Key Biscayne, is among the largest man-made reef projects anywhere. Planned to ultimately span 16 acres of the ocean floor, it also happens to be a cemetery underwater. It was designed to have the futuristic look of Atlantis, and while it's tough to say whether designers succeeded, it's definitely unique. There's an eerie calmness to it all, much as an old cemetery on land might have, except that the statues and ornamentation seem all the more otherworldly 40 feet underwater. This is particularly true when the fish get curious about your visit.