Here's what you have to know about Capt. Carl Starling: He's one of the few people to survive a bull shark attack, he's appeared in a movie alongside Frank Sinatra, he sparred with Muhammad Ali at the legendary 5th Street Gym, and he fought in 24 professional boxing matches (winning many by KO). The seventh-generation Bahamian is what islanders call a real Conky Joe, and he knows Biscayne Bay and the Caribbean like the back of his salty hand. He's also a certified dive master, can hold his breath for more than three minutes, and spear-hunts with a Hawaiian sling (so the fish have half a chance against him). So if you want to go fishing, lobstering, snorkeling, cruising to Stiltsville at sunset, or on any other adventure involving a boat, Captain Carl will get you there and back in one safe piece, probably with a trophy and hours of stories we don't have room to retell here.

Need a pimped-out ride to the airport? Maybe a 40-person party bus for a 96-hour spree on South Beach? How about a hot-pink stretch Chrysler 300 for your last night as a bad-bitch bachelorette? An orange Hummer limousine with tiger stripes? A Ford Excursion superstretch with a champagne chest and mirrored moon roof? No sweat. Just snatch a few C-notes from the transportation fund (not too many, though — prices vary depending upon the size of the ride and the number of hours you need it, but many can be yours for less than $1,000 for the night, tip included). Holler at Miami Limo. And take your pick from SoFla's most extensive candy-colored, animal-printed fleet of vans, shuttles, motor coaches, charter buses, and sports utility vehicles.

It's 10 a.m. Saturday morning. Painfully hung-over, you reek of tequila shots and stale cigarettes. But you vowed to start working out, dammit, so you roll out of bed, slide into your gym clothes, and power through the drive to Sanctuary 7. In the spin room, mirrors surround you, much to your chagrin. Thankfully, dim lighting means no one can see you're still wearing last night's makeup. Instructor Shawn sits atop a platform, surveying the room. There's nowhere to hide. As the class kicks off, "I'm Sexy and I Know It" reverberates through your haggard frame. You're feeling anything but sexy. He spots your half-assed sprints and cracks a goofy joke at your expense. Everyone laughs, including you. Cheeks burning, you step it up. Sprint, jump, climb, repeat. And before you know it, you're burning off that 3 a.m. Taco Bell shame. Fifty minutes later, "last song" are the two sweetest words you've ever heard. But strangely — with your brow soaked in alcohol-infused sweat, your quads burning, and your tongue desperately dehydrated — you're almost sad to see class end. The endorphins have kicked in, and life is feeling a little rosier. Hangover banished, you've earned yourself a bloody mary — or two.

Tanning is about nothing more than personal aesthetics, so it's not asking too much for tanning salons to step up their interior design schemes. Walking into some strip-mall joint with fake palm trees and yellowed linoleum floors gives you the eerie vibe that their machines will make you come out looking as leathery and tragic as that tabloid monster "Tan Mom." By contrast, the sleek, minimalist interior of Solar Intoxication makes you feel like a high-end swimsuit model even before you get sun-kissed like one. The tanning beds here are all new and state-of-the-art. One even employs sensors to control the amount of UV light so you avoid getting too crisp. And you won't have to pay Kate Upton prices, either: Single sessions start at $15, with a weeklong pass for $27 or a monthly tanning ticket for $75. Looks are everything when it comes to tanning, so make sure you go to a place that values both yours and its own.

The Spa at Mandarin Oriental 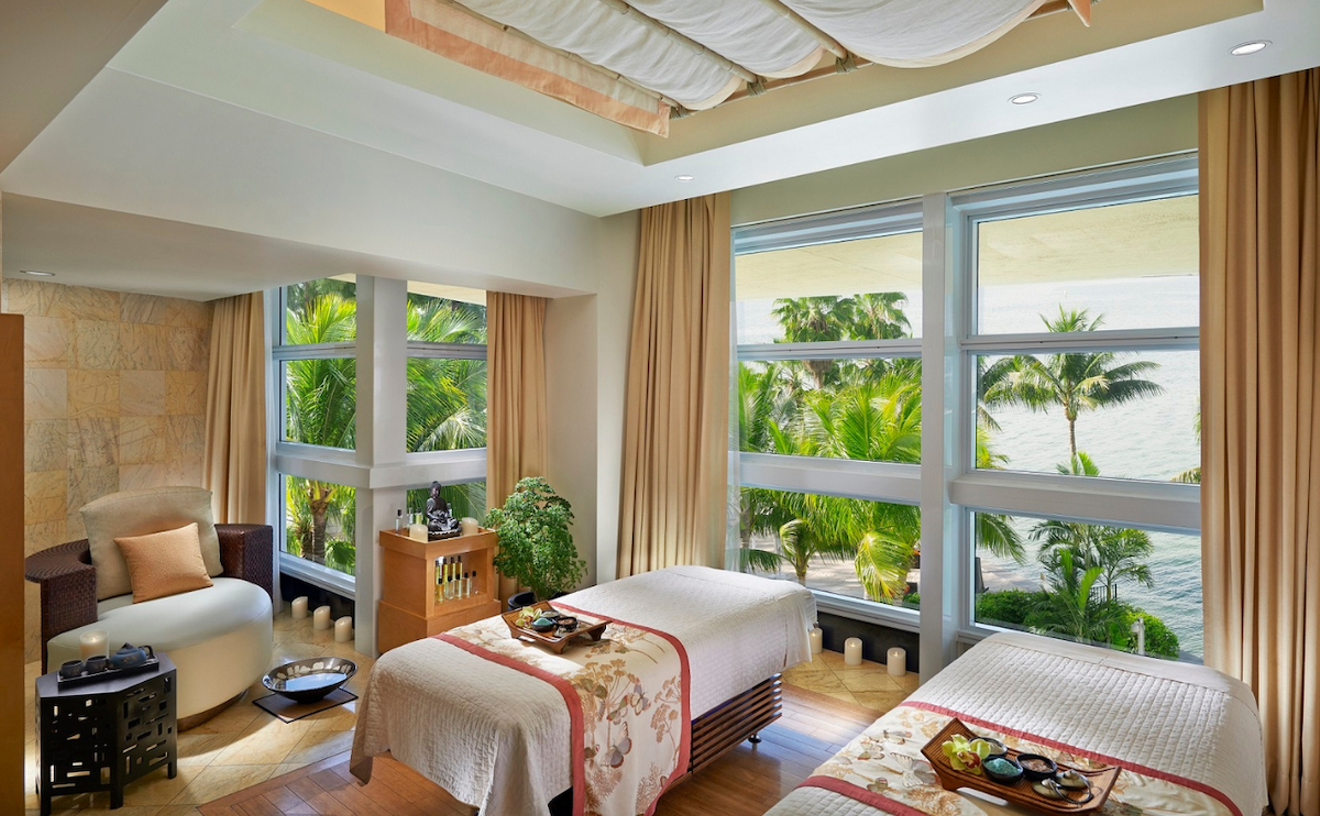 In this world, and especially in luxury-obsessed Miami, there are two kinds of people: spa people and Spa People. Normal, everyday spa people like a massage from time to time, as long as it's not too expensive. Maybe they get a gift certificate from their children for their birthday every year. Maybe they work with a guy who freelances as a masseuse on the cheap to make extra cash. But fancy-shmancy smells and scrubs and techniques? Don't know, don't care. Spa People are a different beast entirely. They want the best. They're willing to pay a lot of money for it too. And places like the Spa at Mandarin Oriental were created for Spa People. Spa People don't want just a massage. They want hours if not full days of scrubs, facials, baths, wraps, manicures, and pedicures. They want lotions with scents designed to invigorate or calm; they want balms that promise to turn back the clock on their skin. They want treatments created by celebrity spa professionals, such as Brazilian doctor Ivo Pitanguy, whose products are used in the Mandarin Oriental's Opulent Rejuvenescence facial ($400). They want these things to be described not as mere treatments, but as "rituals," or, more intensely, "journeys." Spa People don't want just a massage table. They want their own private haven. They want the Mandarin Oriental's VIP suites with floor-to-ceiling windows looking out at Biscayne Bay and amenities like private showers, sunken bathtubs, and Asian décor. (They're going to spend a lot of time in their spa suite, after all.) Spa People don't want just a gym. They want a fitness center equipped with state-of-the-art machinery. They want personal trainers at their beck and call, telling them exactly how best to work out according to their unique makeup of body fat. They want to complement their spa "journeys" with yoga and meditation and even something a little quirky, like belly dancing. If you're a regular spa person, go to a regular spa. If you're a Spa Person on a Spa Person budget, go to the Mandarin Oriental.

For many guys, special occasions are like rigorously trained ninja assassins. They creep up on you, silent and deadly, until — bam! — it's Valentine's Day or your anniversary or your mother-in-law's birthday and you're completely, devastatingly unprepared. There is hope. It's Esthetique, and one call can set up the pampering massage that will save your relationship. You can choose among traditional Swedish, craniosacral, prenatal, reflexology and relaxation, deep-tissue, or hot-stone massage therapy. Want to win more brownie points? Esthetique offers whole-body vibration treatments. Used by NASA, Stanford University, and professional sports teams, whole-body vibration makes muscles expand and contract continually, which pumps extra oxygen into the cells. The idea is that all of that extra O2 relaxes and stimulates the body while healing and growing muscles. Bunk or not, it sure feels great. Your bank account won't need much massaging here either. Weekly specials mean that a half-hour Swedish massage, which usually runs $85, can be yours for $39.95. That fancy vibration session gets knocked down to $99 from nearly $300. Esthetique also offers monthly membership deals from $50 to $150 that include massages, facials, an oxygen bar, manicures, and pedicures.

Between digital cameras and the smartphone that even your mom started carrying around to post cat photos on Instagram, it's easy to assume old-school, film-based photography is a dead art. But there are some things even a high-end digital SLR can't give you — like the almost paradoxical stress and serenity of a dark room, the ingenuity that comes with limitations, or simply the fact that losing a roll of film isn't nearly as distressing as misplacing a 2GB memory card. Film will always be here, in one form or another, but finding proper equipment is getting harder and harder. Thankfully, a trip to Pitman Photo Supply, a family-owned and -operated business in Miami since 1928, can provide you with just about anything you need. They carry Canon, Nikon, and Sony cameras, lenses, and accessories; a wide variety of solutions from LowePro, Tamrac, Werner Hollingsworth, Kata, Gura Gear, and others; and tripods from Manfrotto, Gitzo, Sirui, Giottos, and more. The 12,000-square-foot facility also offers darkroom supplies, frames, and photo albums. And don't worry — if you have some digital work to develop, there's a state-of-the-art photo lab capable of prints up to 24 by 36 inches. Just leave the cat-Instagram'ing to your mom.

You already brew your own beer in the garage, grow your herbs on the windowsill, and knit your own scarves. But how do you take your urban craftsmanship routine to the next level? How about making your own gold, silver, and brass jewelry to give your accessories that DIY flair? Thanks to Jewelry Creations Workshop, you don't need a degree in metalworking or access to a medieval forge to make it happen. Instead, head to an unassuming white single-story building a couple of blocks from Arch Creek Memorial Park in North Miami. Inside, the workshop offers intimate classes that teach everything from the basics to advanced techniques in metal fabrication using any kind of metal you'd like, plus techniques such as fabrication, enameling, fold forming, and wax carving. Steven Brownlee, a professional jeweler since 1999 and a graduate of the Revere Academy of Jewelry Arts in San Francisco, started the workshop five years ago. "I love what I do, and I'm eager to share my passion and knowledge," Brownlee says. Options range from one-day classes to four-day sessions at varying prices.

He is the self-anointed "Real King of Bling." And for the past several decades, AJ the Jeweler (born Anthony John Machado) has spent his early mornings, late days, and even later nights peddling the iciest custom pieces to South Florida's most recklessly flossy ballers, rappers, and miscellaneous millionaires. Now boasting a clientele of more than 300 athletes, entertainers, and public figures, he and his heir, Josh the Jeweler, continue to strive to maintain the top spot in the jewelry game. So on the regular, they wake at dawn, cruise out to their Cutler Bay stash house, load up a backpack with $2 million in merchandise, climb into a black Escalade driven by an armed bodyguard, and then zigzag all over the 305, 786, 754, 954, and 561 for meets with top-flight buyers such as LeBron James, Dwyane Wade, Udonis Haslem, Floyd "Money" Mayweather, and clients on all 32 NFL teams. That's called a delivery day. And whether the next client needs a black-and-canary-diamond Dom Pérignon bottle pendant, a five-figure Rolex with a face to match its owner, or an iced-out $250,000 platinum necklace for grandmama's b-day, these hard-hustlin' jewelers gotcha. Because, as father and son shrug, "C'mon, we're AJ and Josh the Jewelers!" 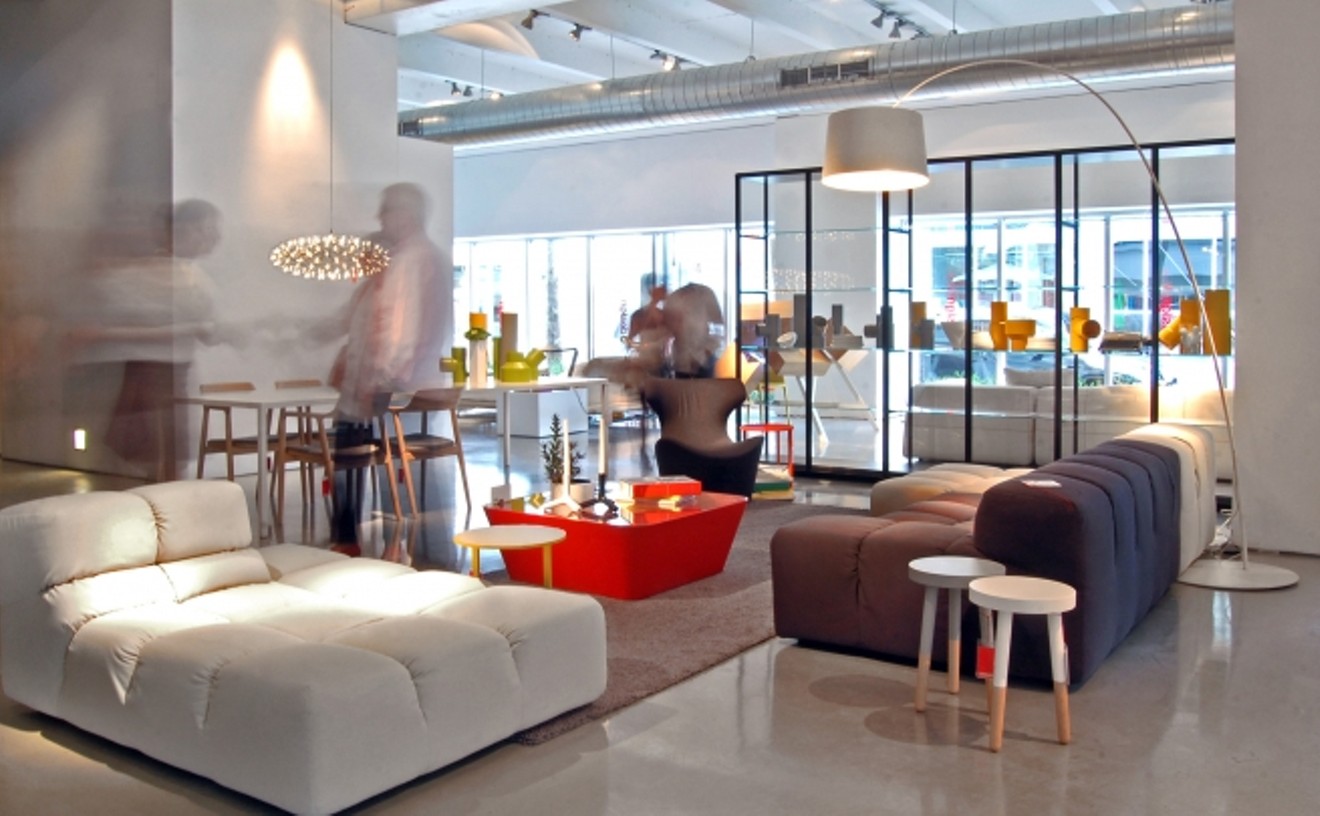 Nasir Kassamali, who cofounded Luminaire Lab with his wife, Nargis, has always envisioned his business more as a church for the worship and learning of design rather than merely a furniture store. Unfortunately, there's no "Best Design Church" category here, so "Best Furniture Store" will have to do. Then again, don't be surprised if you begin feeling a bit religious and fall to your knees in worship of modern design if you do enter the space. Luminaire is simply the best source in Florida for contemporary and cutting-edge design sourced from all over the globe. Even if you can't quite afford that sleek Zanotta desk or that wispy "Leaf Chair" from Lievore Altherr Molina, the store and its sister shop in Coral Gables carry several other practical design items that may well be within your budget. If you walk away empty-handed, consider the visit a pilgrimage to the design gods.