Dining alone is one of life's underrated pleasures. Eat quickly; eat slowly. Gawk at other diners; bring a book. Have a glass of wine; have six. Every choice is sweetly your own, including the most important: Which restaurant? Blue Sea works on all sorts of levels. First, the food, an innovative array of sparkling fresh sushi presented with artistic flair (artists are said to eat by themselves quite often). Appetizers include a spicy lobster martini ($25) and ceviche of diver scallops with mango, ginger, and lime ($14). Nigiri kick bass with selections such as the roe from salmon, uni, and flying fish ($7). Maki and jumbo maki rolls are available, as is pressed oshi — don't miss the salmon and tuna with mango jelly. Sushi sauces excel: tamari, ponzu, asam manis, peanut, eel, and kim chee. Rolls are under $20, but Blue Sea is not cheap — especially if you delve into the caviar offerings. But that's another beauty of solo dinners — you pay for only one. Then there is the setup to consider. Blue Sea consists of one long communal table that juts at an angle from the sushi bar to the cusp of the Delano's still-happening-after-all-these-years lobby scene. Talk about gawk-worthy! Plus, while in regular restaurants it is generally considered rude to lean over to people seated at the next table and introduce yourself, it is common practice at communal tables, which are conducive to conversation among those who don't know each other. Even more so after imbibing some of the singular sake selections. Maybe you will make a friend. Maybe not. Either way, pristine sushi is a given. 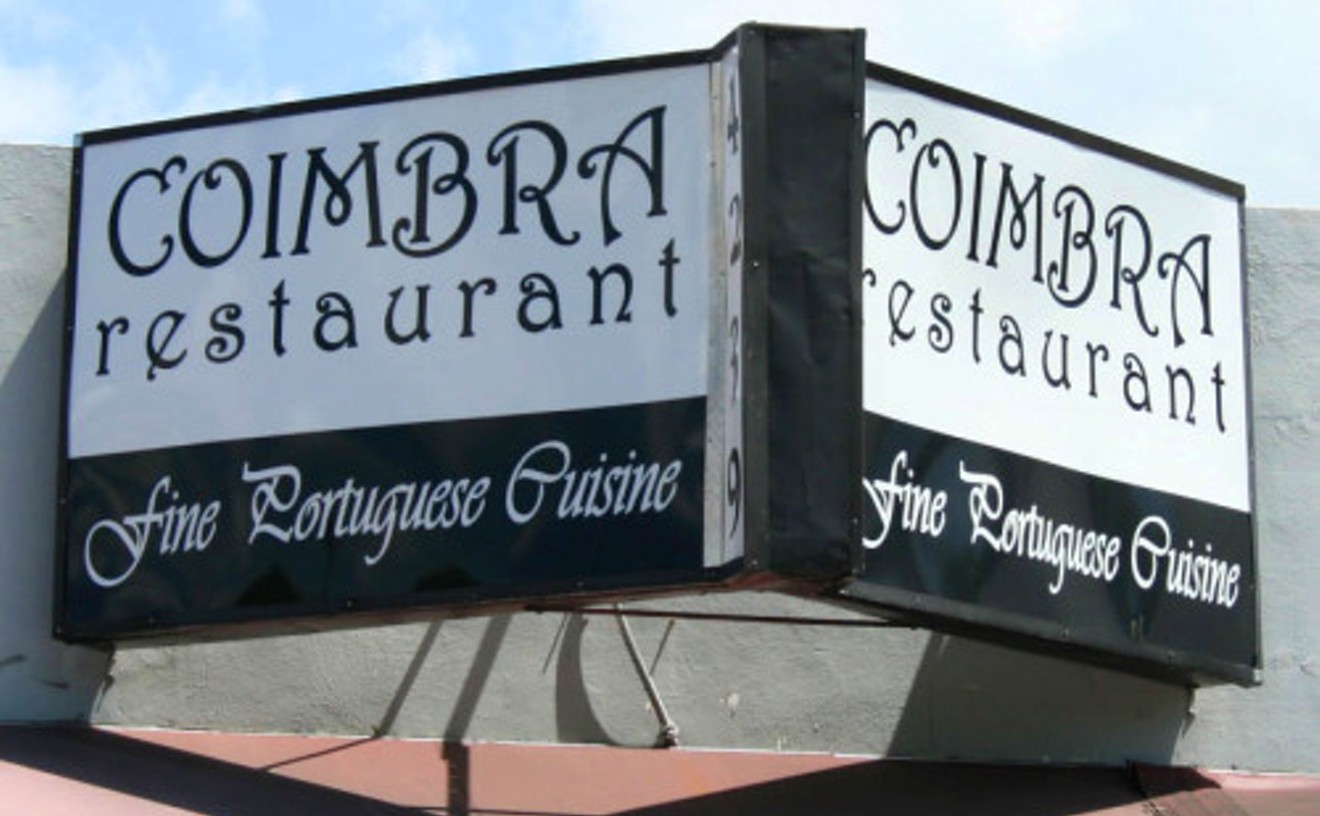 It would be wrong to say Portuguese cuisine rests solely on its treatment of salt cod, or bacalhau, but it's hard not to admire the culinary alchemy that transforms something resembling salted drywall into one of the tastiest things you can put in your mouth. Which is one reason it's hard not to admire Coimbra, where a clientele ranging from young couples to extended families chows down on airy, crisp salt cod fritters (85 cents each) and lusty sautées of the star protein with potatoes, olives, hard-cooked eggs, and lots of good, fruity olive oil ($15.95). There's plenty more to like too, and it would be wrong if you didn't check it all out.

Do not eat the single and singular meatball-size sphere of pan d'bono that gets plunked upon your bread plate at OLA. Oh no. Made with yuca flour, mozzarella cheese, sugar, and milk, this ungodly delicious little ball will cause you to crane your neck to seek the waiter who traipses through the dining room with a basket of it fresh from the oven. After snagging a second one, you will be thinking of the third — and after the third, you will be too full to fully savor the Nuevo Latino flavors that jump from the hamachi ceviche, plantain-crusted mahi-mahi, and tenderloin churrasco — and you will no doubt have to bypass the signature chocolate cigar for dessert. That would be a shame. So don't even think of trying the pan d'bono. You'll just have to take our word that it's out-of-this-world. 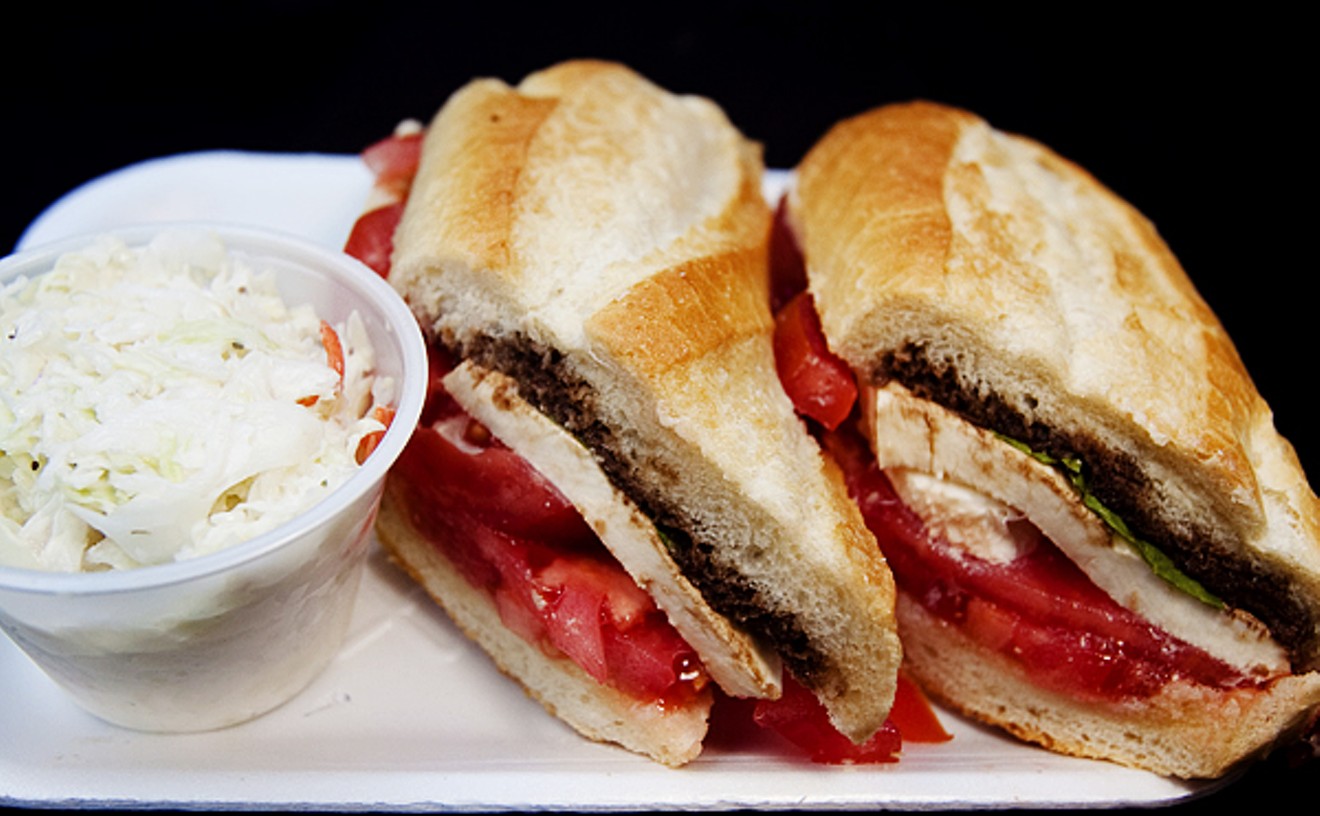 Early each morning, when most of us are still asleep, the crew of Joanna's Marketplace is in the kitchen, slicing, dicing, grilling, poaching, broiling, and sautéing all manner of fresh comestibles. Little bits of smoked ham hocks are being put aside for split-pea soup; tomatoes are simmering into a bisque — two different soups are offered each day in three sizes ($3.50, $4.25, $6.95). Cooks debone chicken breasts that will later be bathed in Marsala sauce or stuffed with prosciutto, sage, and cheese for saltimbocca (the menu changes daily). The lamb being cut up will become moussaka; the beef tips will later be smothered in charred tomato sauce. Any hot entrée comes with your choice of a protein and two side dishes for $10.95. The former might be creamed spinach or ratatouille, the sides could be potato latke or wild rice pilaf, but the style of cuisine is always a mix of American and international classics cooked in hearty fashion. Sandwiches, salads, and a bounty of fresh-baked breads are on hand as well. Joanna's opens daily at 7 a.m. and stays open until 7:30 p.m. (6 p.m. Sundays). Incentive for getting there early is a Belgian-chocolate-filled almond croissant with a cup of frothy cappuccino.

Sometimes it's annoying to pay for something you could easily make yourself. But Mari-Nalli takes a bit of the edge off. At this place, you can get steak, chicken, vegetarian, and shrimp quesadillas. They cost between $3.25 and $4.60. There are also salads for $6.95. Order yourself a meal and then try some of the microbrewed beer. You'll forget you were ever annoyed. About anything.

There is no counter with rickety stools nor any apron-clad dude shucking clams. Kobe Club, Jeffrey Chodorow's Wagyu steak house adjacent to China Grill, is too swank for that. The intimate 52-seat room is darkly, richly swathed in rich woods, leather, and stone; 2,000 swords dangle from the ceiling. And the raw bar is only a menu category. Stone crabs, Alaskan king crab legs ($18/apiece), littleneck clams ($11/half-dozen), chilled 2.5-pound lobsters ($79), and shrimp the size of potatoes ($7/each) compose the limited but luxe lineup, along with a changing selection of East and West Coast oysters ($16-$18/half-dozen) — not only Malpeques and Kumamotos but also species with names that sound like rock bands, such as Hood Canal and Beau Soleil. Classic accompaniments are given an Asian twist — cocktail sauce spiked with freshly grated wasabi; mignonette made with aged rice wine vinegar. Sesame-mustard miso isn't classic, but the oysters don't know that and seem to pair well with the dip. Sake-cured salmon, tuna tartare, and iced hamachi with jalapeño and pineapple are available for those who like their raw fish fancy. Wagyu steaks from America, Australia, and Japan constitute a mighty impressive second act.

Ortanique on the Mile 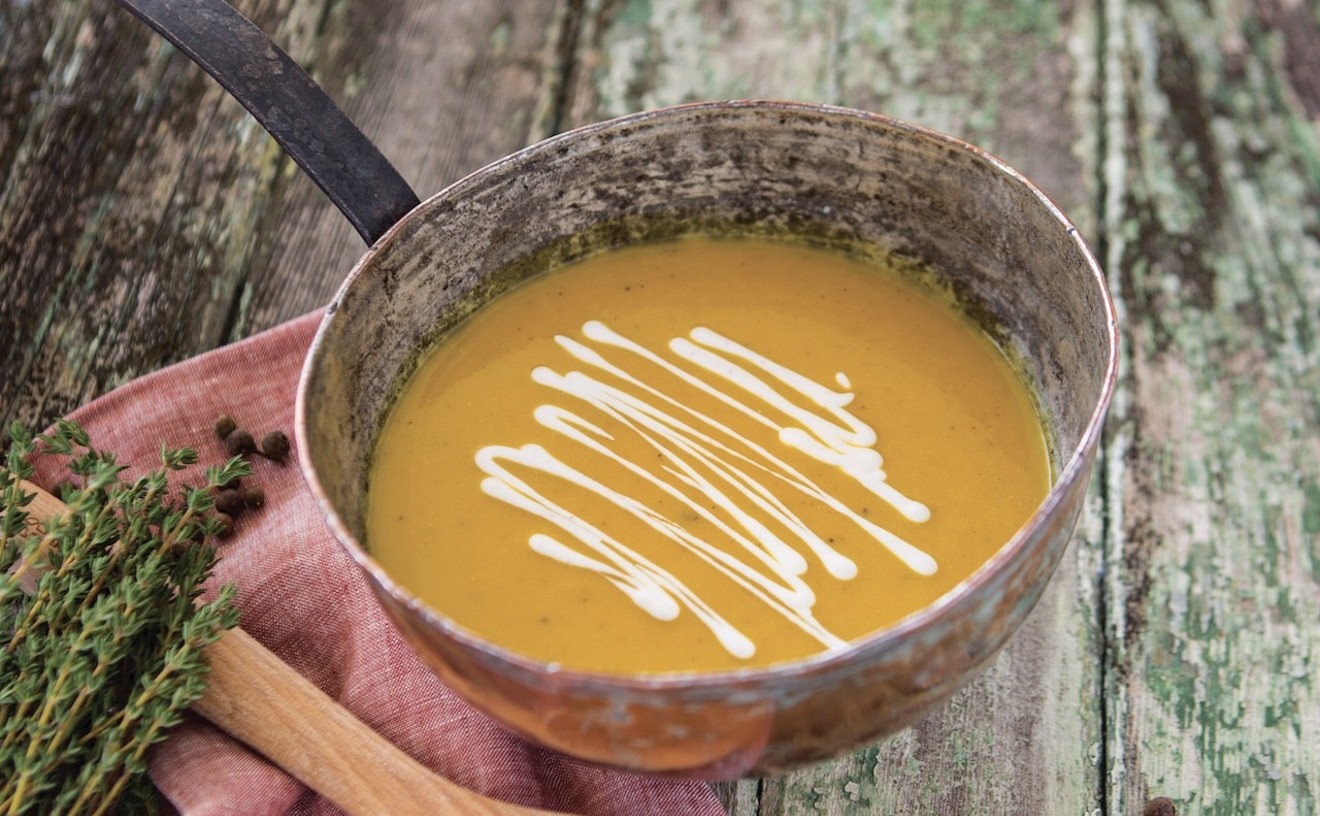 Photo courtesy of Ortanique on the Mile

When Orson Welles described style as being "unique for yourself yet identifiable to others," he could have been talking about Ortanique. Chef Cindy Hutson's Caribbean-based "cuisine of the sun" is bright enough to delight in a coal mine, but achieves optimum taste when in harmony with the warm and vivid sunset colors, flowing gauze curtains, mahogany woods, and hand-painted motifs of fruits and flowers gracing the 120-seat room (plus terraced outdoor garden). The buoyant environment pairs with the light, happy food like mango with champagne — meaning if these walls could eat, they would have Caribbean bouillabaisse, Bahamian black grouper with orange liqueur sauce, and a jerked pork chop with rum-guava glaze.

Best Restaurant for a Power Lunch

Since opening almost a year ago, Prime Blue Grille has attracted a steady stream of clientele hungry for veal chops, short ribs, rack of lamb, and seven cuts of steak seared upon an 1,800-degree hickory-burning grill. Even more types of seafood are available, from yellowfin tuna to whole branzino to wild Alaskan king salmon — also freshly grilled. Eighteen side dishes — roasted Brussels sprouts, truffled mash, prosciutto and fontina potato gratin — make decisions agonizing. Flatbread pizzas are popular, too, served sizzling from an oak-fired oven. In other words, Prime Blue appeals to all downtown diners for lunch and dinner, and to those who want their steak without the hormones: Only Brandt corn-fed, all-natural prime beef is used. All seafood is caught wild. (Steaks run $23 to $38, seafoods swim in the upper $20 to lower $30 stream). And as for those omnipotent Miami businesspeople, general manager Jamie Zambrana says the restaurant's private dining rooms "are used almost every day for power lunch meetings and closing multimillion- and billion-dollar business deals." You know, for the really high-priced escort services.

Best Restaurant for an Anniversary 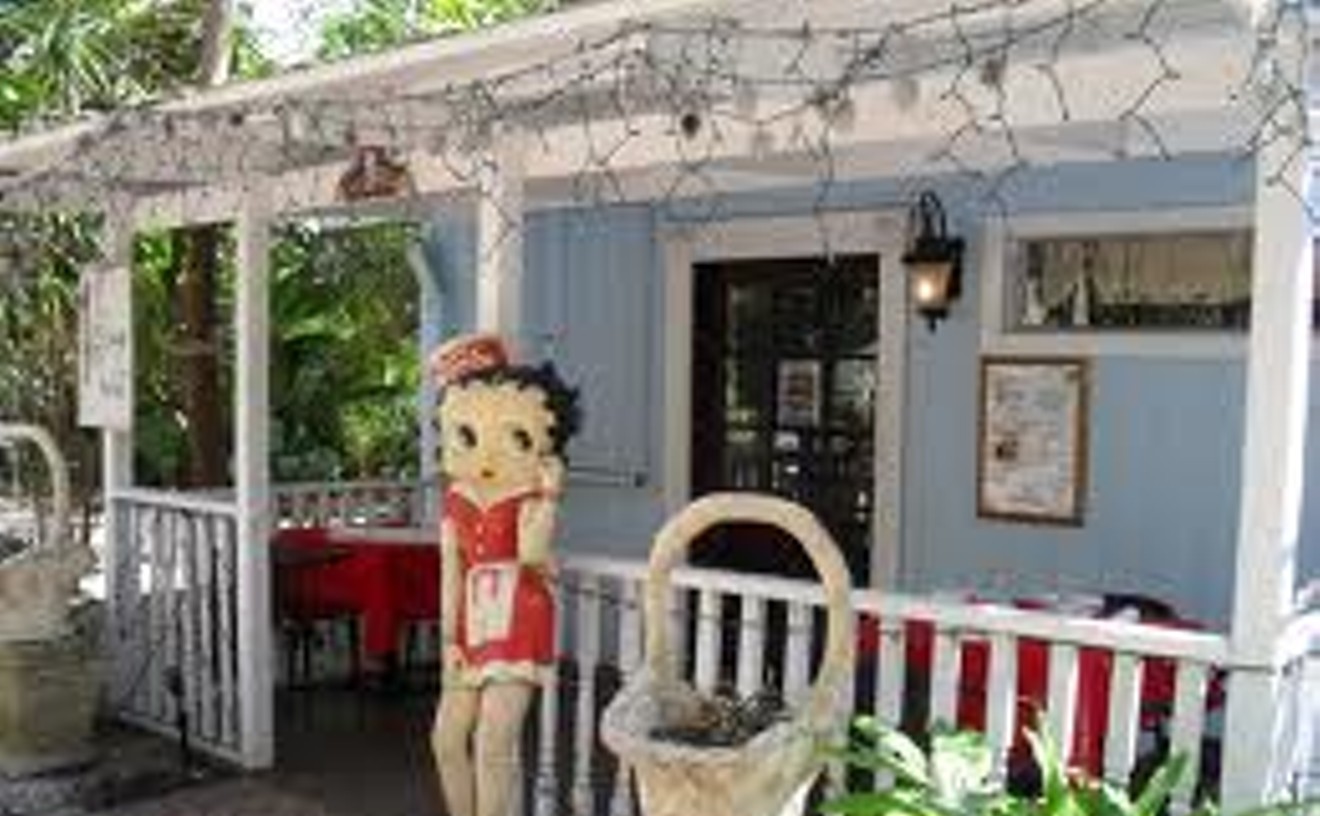 The kids can be snotty, the dog smelly, and weekends sexless, but there's still a lot of love to celebrate. The Village Chalet is a charming spot to remember the day you got hitched, kissed, or whatever fell between. Tucked into historic Cauley Square off South Dixie Highway, the restaurant feels like an Old Florida getaway and is surrounded by banyan trees a-twinkle in white lights. Try to nab a spot on the porch to enjoy your cozy dinner for two (at moderate prices from $11 to $14 for dishes such as chicken Marsala and grouper). It's so romantic you'll hope the kids are sleeping soundly upon your return home.

If you want to see how the other half lives, or at least eats, what place could be better than a restaurant owned by a genuine celebrity in the most celebrity-obsessed burg in the nation? Michael Caine, Andy Garcia, Pat Riley, and Eva Longoria are just a few of the A-listers who've slipped into Danny DeVito's over-the-top, Murano-glass-chandelier-and-white-leather-banquette-pimped space, located (where else?) on Ocean Drive. You might want to nurse a beer at the bar, though, unless your credit card can carry the weight of $27 shrimp appetizers and a "Global Wagyu Trio" that checks in at a celestial $295.